"Tayutama: Kiss on My" Mediocrity 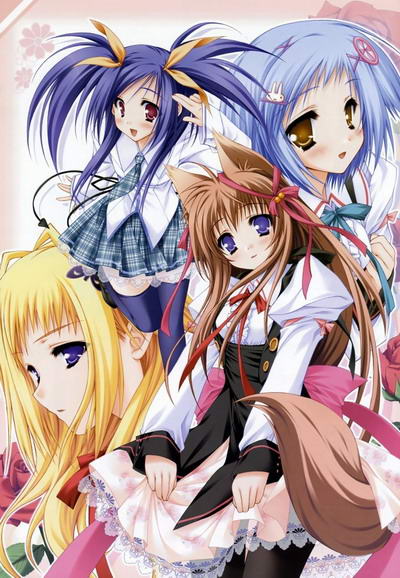 Tayutama follows Yuuri, a high schooler with a high knowledge in both Shinto practices and auto mechanics. One day, a tree carrying evil spirits is about to be knocked down, and so Yuuri goes off and tries to keep this act from happening. Unfortunately he does more damage than good, and causes all the little cute-looking demons to pop out of the tree. After they escape the tree spirit brings about an unnamed fox girl, who pulls out her magical mallet and starts beating the crap out of the little demons. After this the fox girl starts living with Yuuri, who has dubbed her Mashiro. Overnight Mashiro becomes a fox woman, and begins to act like Yuuri’s wife; much to the dismay of Yuuri’s friend Ameri. Together the strange couple faces off against demons and other sorts of problems, including those in the romance category.

Here's my problem with this and every other anime based on eroge video games: they follow the exact same formula! It's always one guy, a bunch of girls, and one of them is either a magical girl or a half-girl/half-animal sort of thing. They fight over for the affection of the boy, and it results in a mixture of humor and over-dramatic sadness. While Tayutama follows that method to a key, it’s surprisingly not half-bad.  A lot of the gag humor (including one involving two phoenix spirits) will get a chuckle from most people, and the surprise appearance from everyone’s favorite anime director Nabeshin will have viewers roaring with laughing. But it’s when the show gets serious that Tayutama starts feeling clichéd; and the classically tiresome “I love him more than you” procedure appears to ruin what could’ve been a good show.

Granted, the last one-guy-meets-multiple-girls anime that was really good was Nagasarete Ariantou, and the last masterpiece would either have to be Tenchi Muyo! or Love Hina. Tayutama has its moments, but it won’t have the staying power of the classics. Though it is watchable without feeling like time is being wasted, Tayutama could have been better.

Tayutama: Kiss on My Deity is available in stores now through Sentai Filmworks.