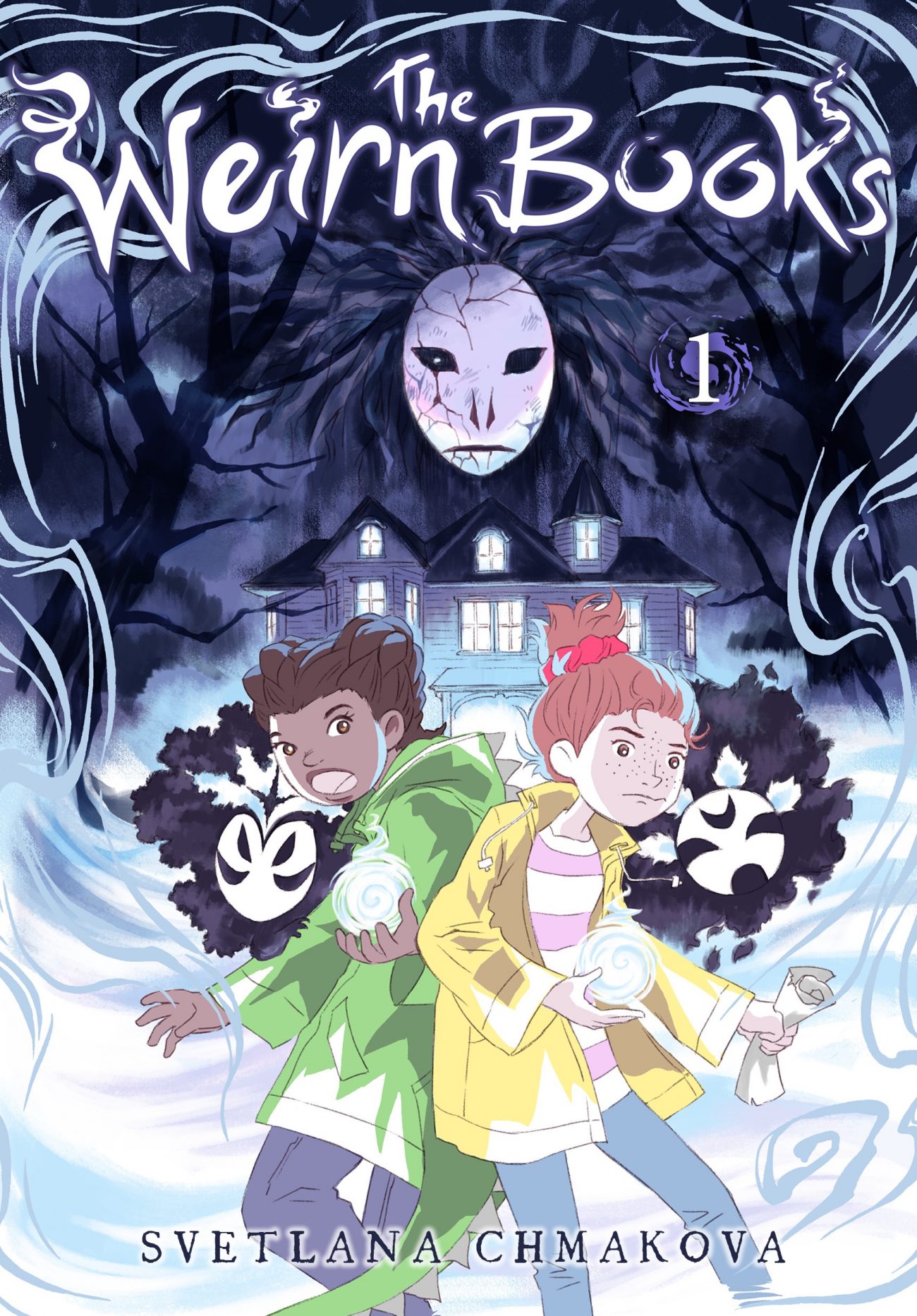 For the last decade, author Svetlana Chmakova has been churning out tales of magic and mystery through her Nightschool series. Within this realm rests the weirns, a special kind of witch that has a spectral known as an Astral. With her new series The Weirn Books, Chmakova aims to add more lore to her creation, and the first volume “Be Wary of the Silent Woods” shapes up to be quite the fine introduction.

Taking place in the small New England town of Laitham, The Weirn Books focuses on cousins Ailis and Na’ya. They attend magic school, where other magical beings learn to control their powers and hone their skills. But a stranger-than-usual occurrence starts happening, where a weird creature roams near a rotted mansion within the Silent Woods. Despite pleas from Ailis’s grandmother, the strange things manage to take hold of their surroundings. From a classmate acting nicer than usual and Na’ya’s cousin D’esh vanishing to the reappearance of a long-gone headmistress, the lives of Ailis and her family are about to be flipped around.

Unlike her Nightschool series, Chmakova brings a wider audience to the forefront for The Weirn Books. As such, the reintroduction of the world that she’s created is fairly understandable, given that Nightschool is geared towards an older audience. You get a good idea on the sort of magic that resides in Laitham, as well as all the different sorts of bump-in-the-night monsters and mages that call the place home. Even how magic works is showcased in a fairly easy way to follow, with spells being connected to one’s spirit.

The characters you’re introduced to in “Be Wary of the Silent Woods” are fairly likable. Ailis and Na’ya’s closeness is showcased well, with the two being almost inseparable. Prim and proper Patricia appears to be the smug type, which makes her change in attitude when possessed fairly laughable. Grandma Julia, who watches over Ailis, is a funny and stubborn crone, though her wise ways have a means of adding a stronger guidance and hint towards how our main heroes should act in the face of danger.

What I appreciate about “Be Wary of the Silent Woods” is how it doesn’t sugarcoat the danger that’s presented in the world of The Weirn Books. The concepts of death and life-altering curses demonstrates the need to learn about consequences and being careful on one’s path of life. Despite the bravery of Ailis, Na’ya, and the other characters, there’s a legit threat to their lives that they come face-to-face with. Demi Juneaux, this book’s villain, has an air to her that makes her seems harmless, only for her to turn on a dime and bring impending death in the name of her sciences.

Chmakova knows how to be dark with her storytelling, even when aiming to appeal to all ages. But that doesn’t take away from the heart and spirit that The Weirn Books aims to deliver. Even when things look bleakest, there’s a sliver of hope that flutters in the background, giving way to a more positive outcome. However, even when there’s triumph, “Be Wary of the Silent Woods” goes the extra length to showcase that that all’s not back to normal. I like how they handled a character’s disappearance towards the end, with their re-entry to normalcy being not as hopeful as Hollywood Endings tend to fashion together.

Visually, Chmakova does take some inspiration from Japanese artists with the overall look to the characters. However, instead of trying to go for a manga style, her characters have a little more in common with Western indie comics. Her Astral creations brim with dark imagination, but there’s enough warmth to them that make them seem like a cool pet. They look evil, but there’s enough cuteness in their personality that gives them a kinder identity. The only downside to the art style is its background art, which can sometimes be a little simplistic (or nonexistent in places).

Those looking for a new magic series — or wanting an extension to Nightschool — need look any further than The Weirn Books. “Be Wary of the Silent Woods” delivers enough uniqueness for newcomers of Chmakova’s works, as well as a good dose of comfortable familiarity for longtime readers. As it appears a greater evil is about to enter Laitham, it would seem that Ailis, Na’ya, and the rest of the students won’t have much time to enjoy an average mundane (albeit magical) life. Considering what Volume One of The Weirn Books was able to deliver, I look forward to seeing what sort of dangerous future is in store for these kids.

GAME REVIEW | Returning to the Mad...