HomeAnimeGet Your "Panty & Stocking" In a Bunch!
by: kingbabyduck
0
Anime / Reviews

Get Your "Panty & Stocking" In a Bunch! 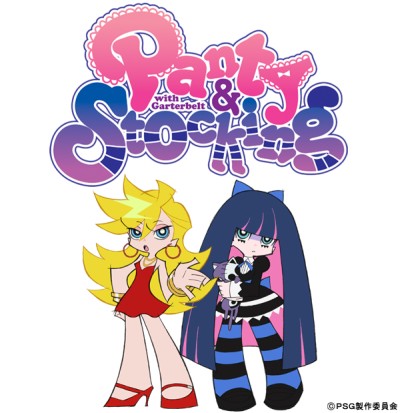 2010 has been the year of the anime world turning to the Americas for inspiration. Highschool of the Dead looked to George A. Romero for its zombified gore and glory, and Occult Academy took a nod from Sam Raimi's style of things that go bump and chuckle in the night. This month the folks over at GAINAX (FLCL, Evangelion) are up at bat, with their spin on gross-out and overtly-sexual humor in the vein of Ren & Stimpy: Panty & Stocking With Garterbelt. It comes as no surprise that the same studio that brought us Kare Kano and Gunbuster manage to hit this one out of the park.

So who are Panty & Stocking anyway? According to a little back story our two title characters were once angels, but were kicked out due to their bad behavior; Stocking enjoys sugar and sucking on lollipops, and Panty loves men and sucking on...never mind. In order to get back within the pearly gates the duo must defeat monsters in Daten City -- the city between Heaven and Hell -- under the advisement of Reverend Black Dynam--I mean Reverend Garterbelt.  Will their heroic deeds earn them rewards, or will their vices turn off the folks above even more? 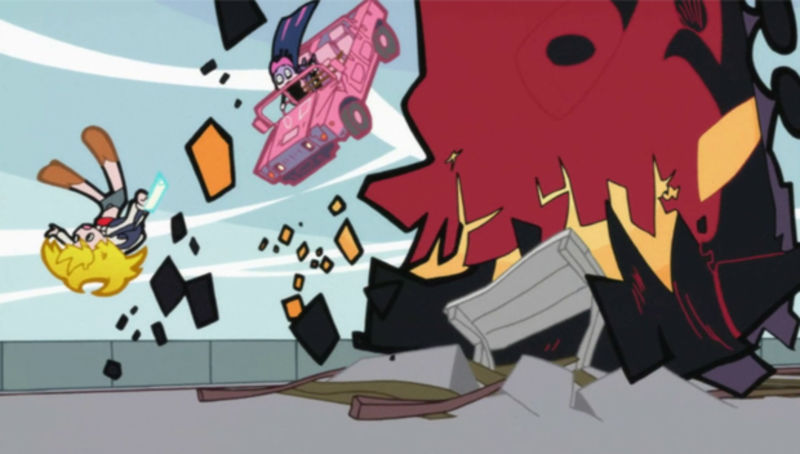 A lot of people have either been raving about the animation style, or they just plain hate it. As someone who used to watch the classic shows on Cartoon Network (Dexter's Laboratory, Cow & Chicken, Powerpuff Girls) seeing a Japanese studio take on this sort of world and character design on adds a breath of fresh air to an industry that hasn't given us a jaw-dropping look since 2008's Soul Eater. Add on the fact that the death sequence for the monsters is probably one of the funniest moments on the show -- using live-action sequences in the same way Chowder does -- and you've got yourself an anime whose look is unmatched. Yes, Panty & Stocking doesn't have that realism appearance (with the exception of the transformation sequence), but that's the point of the show, which leads us to the story techniques.

An episode is usually split into two 11-minute cartoons, each one dealing with a specific monster. The first part of episode one had what us Kevin Smith fans would call a Golgothan (that's a shit demon if you can't pronounce it), giving way to endless fart, barf and poop jokes that would make John Kricfalusi smirk with delight. A speed demon was the focus of the second half (with the title sharing its name with a popular David Carradine/Sly Stallone movie), creating jokes involving fast cars, technique and -- wait for it -- sex. It should come as no shock that the folks at GAINAX want to pull out all the stops on this show, and fortunately they've built up enough reputation to be able to get away with it. 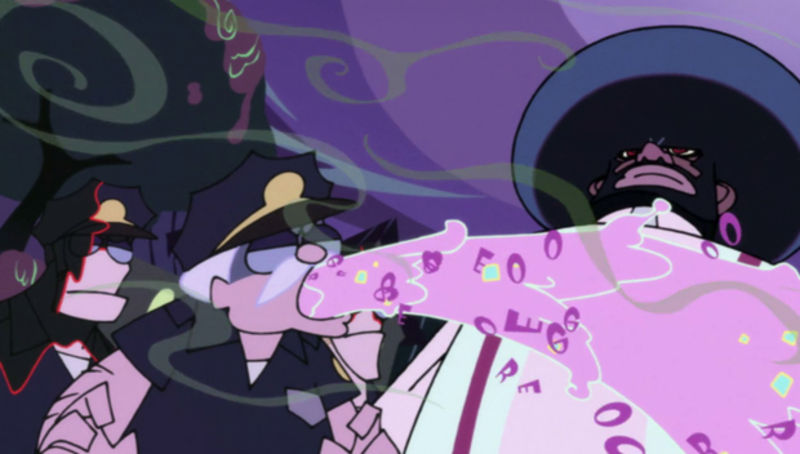 They warned him not to see "Vampires Suck", but he didn't listen.

The voice acting and soundtrack are superb, with Arisa Ogasawara & Mariya Ise as Panty & Stocking respectfully shining brightly throughout the show. Ogasawara's sarcastic and brutally honest take on Panty is side-splittng, with Ise's Stocking adding on the cuteness that's needed to counter Panty's sexual exploits. Kōji Ishii's portrayal of Garterbelt is almost as blaxploitation as one can get in Japanese anime, on par with some of the characters from Michiko E Hatchin and Cowboy Bebop. Finally we have Chuck, played by -- shockingly enough -- GIR from Invader Zim. (It should be noted that Zim creator Jhonen Vasquez is very happy to see his friend overcome his heroin addiction to be able to act again.) Chuck hasn't been used enough to be judged on the show, so let's hope that GIR can pull out a sort of Emmy-worthy performance in this series. The music by Taku Takahashi (one-half of the awesome Japanese rap duo m-flo) is beyond incredible, with beats and samples that will hopefully be heard in dance clubs across the globe.

As a whole Panty & Stocking With Garterbelt works wondrous magic in the anime comedy world, making a series that plays well to both sides of the Pacific. (You can probably trick your anime-hating friends into watching it by saying it's an American cartoon dubbed in Japanese.) Granted there is some worry that Panty's whoreness might be over-played, but that's maybe the smallest (and only) complaint one can make about this anime. Only one episode in, and already P&SWG is looking to join the same ranks as Ren & Stimpy, Beavis & Butt-Head and Rocko's Modern Life. Cross your fingers that there will be more than one season, and that the boundaries in the anime world will be pushed again for the sake of a good laugh.

By the way: can we get Michael Jai White to play Garterbelt in the English dub? Just a suggestion...

Panty & Stocking With Garterbelt can be viewed on Crunchyroll.com.

It's time to go Berserk!