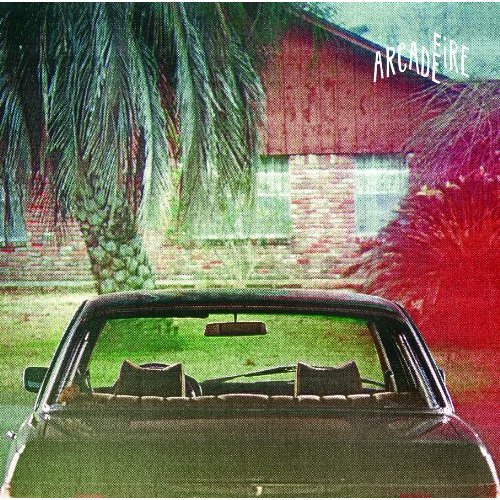 Fans of Arcade Fire have come to expect their beloved indie rock band to always pull out masterful albums. The Suburbs, while no exception, tends to showcase a more melancholy side of Win Butler and his Canadian brethren.

Those looking for their more epic side a la "Wake Up" need look no further than "We Used To Wait." The simple piano and drum opening slowly diving deep into a realm of hope and young discouragement, and Butler reminiscing on simpler times creates a sort of wanting for the past to return. By doing so Arcade Fire speaks the cold hard truth that everyone denies, even though it's right in front of their faces: simple times are unachievable in this modern-day world, even if you wait for them to return. "Rococo" comes close to the trademark epicness that Arcade Fire have come to be known for, with its heavy Beatles-like string arrangements and beautiful melodies from the Fire ensemble.

The title track is split into two parts, each one bookending the album. The first part sends the listeners down towards the childhoods of the band members, where adventures lie within screaming children playing in the backyard. The line "It meant nothing" repeats throughout the song, giving way to the meaning that their childhood doesn't hold as strong a crucial point in life as the current days of raising their own family does; although there is a lot more mediocrity to deal with when you're older. The second part plays out like regretfulness, in which the band wishes for those childhood days to return so they can waste it joyfully once more. It's a cold realization, as if the inner child succumbs to a working world where fun is only found in scarce parts of life.

These childhood moments play out well in "Empty Room," creating a soundtrack that is like that of a child's imagination. It's fast-paced and happy tone bark back to the days where all you needed was your mind to create hours upon hours of fun. The two-parter "Half-Light" tells the tale of when childhood finally ends (very reminiscent of the recent Where The Wild Things Are film, mind you). The child runs through the streets to search for adventure, only to find that there are no innocent adventures left in the world; the line "Pray to God I won't live to see/The death of everything that's wild" sums up the true thought process of the inner child, a rally cry of sorts to those being forced to grow up in a world without magic.

The final two-part song "Sprawl" act as the final nails to the coffin where the past lies in eternal rest. Every moment of Arcade Fire's past seems wiped away from the newly-developed areas of their old neighborhoods. The second part -- with the subtitle "Mountains Beyond Mountains" -- is the harsh realization that the world's too small of a place to run away from the realities that are faced on a daily basis. You may need the darkness to hide from these truths, but it's nearly impossible to find total blackness in a world that's even shines through with black lights.

Oddly enough, while it's a dark reality to behold, Arcade Fire know how to make even the roughest of times sound wonderful; and that's what makes The Suburbs a joy to listen to. It may be a bittersweet way of looking at the world around you, but it's a lot better to be given the truth on a beautiful platter than it is to receive it like a slap in the face. The message is clear: Enjoy the days of your youth, because one of these days playtime will be gone before you know it; at least you'll find your true purpose when you grow up, instead of spending "Wasted Hours" staring into oblivion doing nothing at all.

The only thing better than killing...