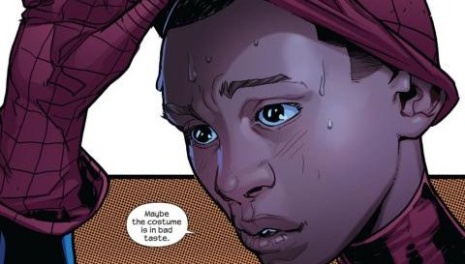 Comicbook news isn't often in the mainstream of the news circuit. However reccently, the nerdverse was hit hard when news broke out about the death of Peter Parker. His death occured in issue #160 of Ultimate Spiderman.

However, those who live a chunk of their life in the Marvel universe were aware that this was just one spiderman to exit stage left. We all knew someone knew take up the mantle, and some of us have already seen him.

He is half African-American and half Hispanic. He will share a similar origin with Peter Parker, but will have different abilities. We will also see cameos from some supporting characters who will help Miles transition into the new spidey.

The Ultimate Spiderman series has always had a primary focus in the contemporary- so why not have a hero who would represent some of those facets in a more prevalent way? Some might say it took a little too long for this to happen. I could agree with that but that would feel somewhat...counterproductive. It will be really interesting to see how this new hero's life experiences will influence his heroic morality.