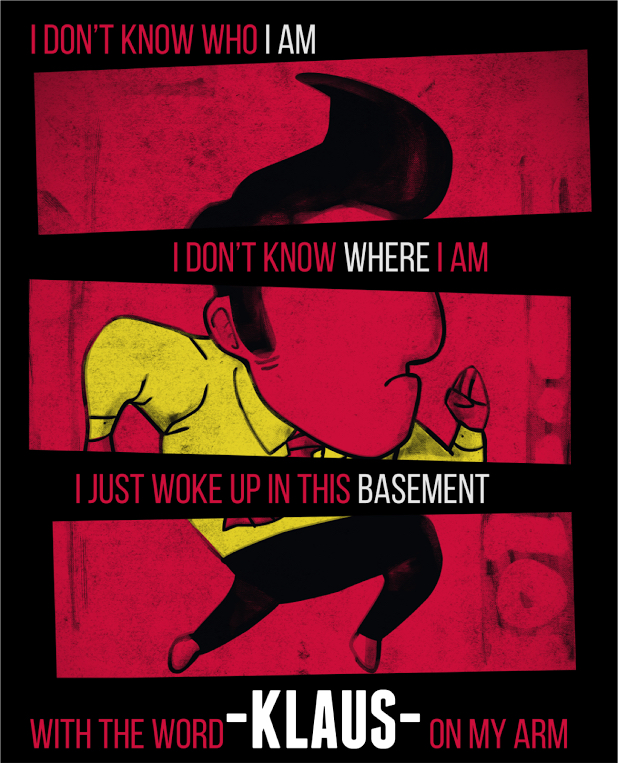 You find yourself regaining consciousness in a dark and dirty basement. All facts on your life -- including your name -- are wiped from your memory. All you have to go by is a word that's been written on your arm: Klaus. And thus your journey to unlocking the truth about yourself begins in La Cosa Entertainment's debut game Klaus, available now on PS4.

Klaus has you taking control of the mysterious man, as he runs through a strange factory that he feels a deep connection to. The more you roam around, the closer you'll get to rediscovering yourself and what brought you to this area. Later on another individual known as K1 will join your ranks, as he performs some of the heavier work such as punching out steel barriers and taking out enemy robot clones. Klaus knows that you are controlling him, even going so far as to rewire your control scheme to his own benefit amidst his frustrations. 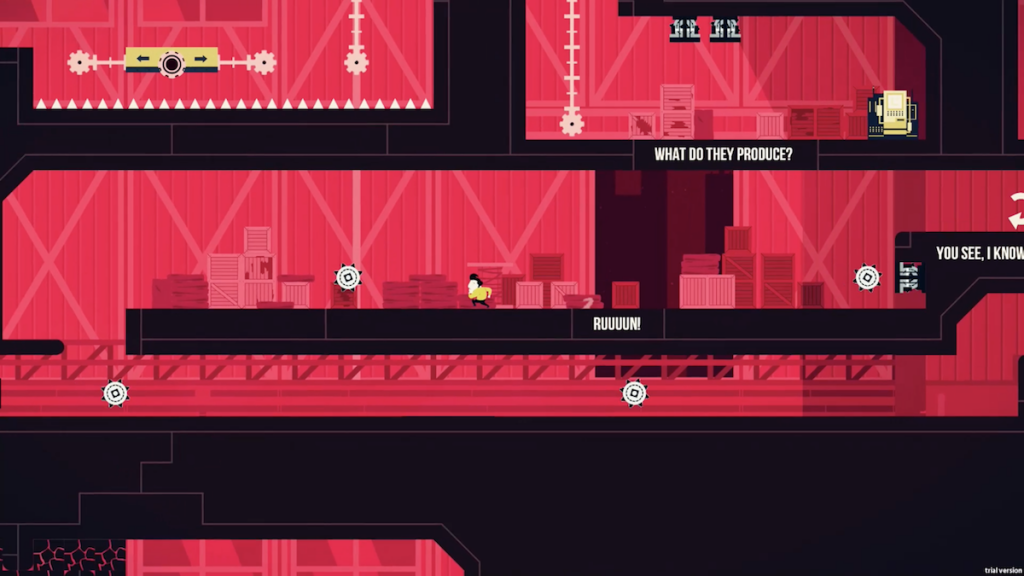 This is a game that is fully aware of the player's existence. Sometimes Klaus is happy that you are helping him out, but soon he begins to distrust your actions. He has no idea who you are or what your objections seem to be, even though you're obviously trying to assist him. In a way, Klaus acts out in a way that any person in his situation would. No one would be confident enough to trust someone they just met with finding out their true self, especially putting their faith in a person who is controlling every single decision they're making (hence why Klaus will occasionally revolt against the player).

Klaus does an amazing job with taking the usual platformer mechanics and then tossing in a unique story to go along with it. The amnesiac character (along with K1) will partake in a one-sided conversation, giving way to our main focus's mentality. He's scared, unsure of what brought him to this place, and even though he wants to know the truth there's no telling if what he discovers will make or break him. Because of this, there were times while I was playing when a sense of guilt would overtake my mind, as I feared that I was having Klaus rushing towards an impending doom. To make even players question their actions in a thought-provoking manner is what helps make this game stand out from anything I've played in recent memory. 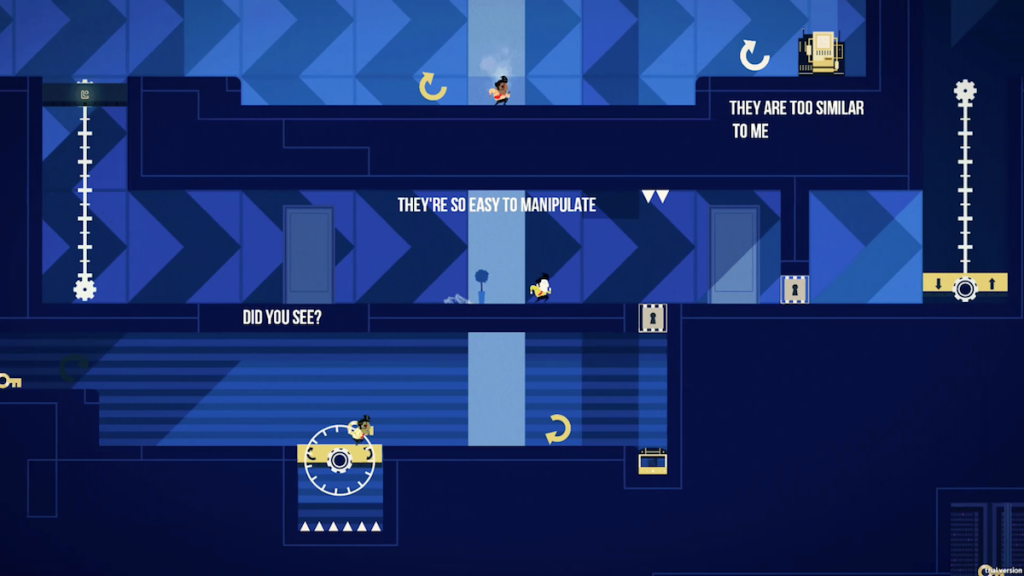 As you play the game, you'll also come across some hidden red orbs, which will transport you to a secret area. Here you can collect pieces of a door that will lead you towards unlocking flashback sequences. It's here when the true mystery unfolds behind who Klaus is and why he's here, so it's best to keep your eyes peeled for these warp areas. There's no turning back or revisiting past levels (until you unlock Arcade Mode), so if you miss one then you'll have to restart the entire campaign if you want the full truth revealed. (Our recent interview with La Cosa Entertainment goes into why this is, along with a few other tidbits on the making of Klaus.)

Klaus makes good usage with the PlayStation 4's touchpad, which has seemingly become just a Main Menu button in previous games. Dragging your finger across it will bring up a crosshair, which can be used to activate doors, movable platforms, and other objects that will help you to reach your next destination. Surprisingly it wasn't at all frustrating to multitask both the platforming elements and puzzle controls at the same time, as they meshed well thanks to some good timing mechanics. Switching between Klaus and K1 -- along with controlling both at the same time -- can be confusing at times, especially when performing some quick techniques that require lightning fast reflexes that take awhile to hone down. 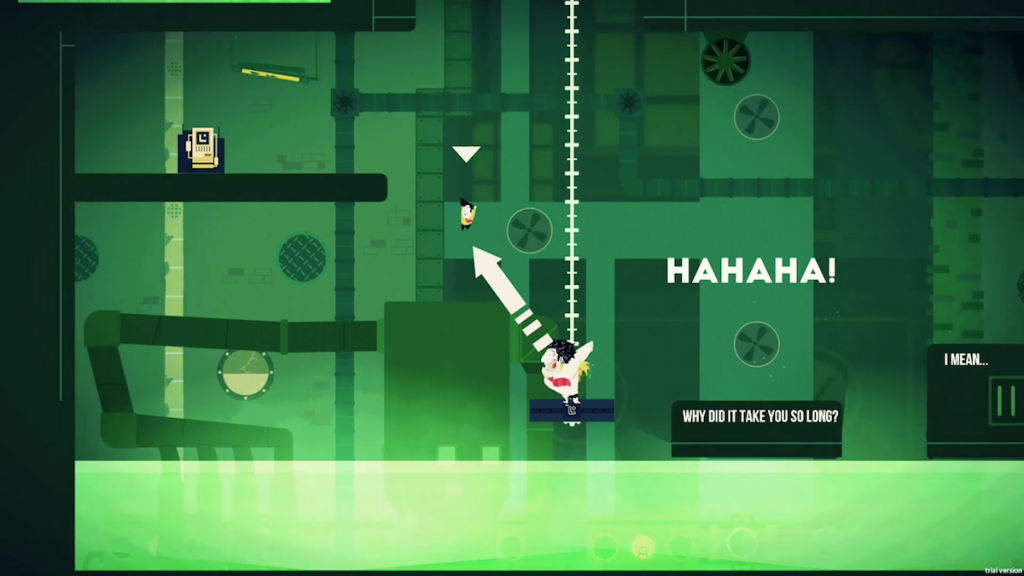 The game looks and plays beautifully thanks to La Cosa's usage of the Unity Engine. Most of the levels consist of a major color scheme (red, green, purple) that engulfs the chapters, giving way to some eye-popping visuals. (One of these sights, without spoiling too much, involves Klaus hacking into a computer, giving way to some impressive coding and an original take on classic DOS-based gaming.) Tying in to the immersion of it all is the game's soundtrack. Composed by Pixkong the ominous melodies help to set up unfolded mysteries, unexpected plot twists, and some time-based escaping anarchy.

Klaus will take you roughly 6-7 hours to complete on a first run. Once done you will unlock the Arcade Mode, which will give you the chance to revisit chapters and recollect the memory pieces you were unable to discover the first time around. However thanks to its original storytelling mechanics, revisiting the campaign and starting all over again will be a no-brainer.

Klaus is one hell of a game, plain and simple. With its intelligent narrative, challenging puzzle elements, and booming and beautiful soundtrack La Cosa Entertainment's debut title is a fitting example of how any developer should make a grand entrance. It may only be February as of this writing, but Klaus has already taken a spot as one of this year's best indie games.