It's no secret that One Piece is a massive phenomenon over in Japan and within the worldwide anime community. Over 800 manga chapters, 770 episodes, a dozen films, theme park attractions, and even stage adaptations have kept the adventures of Luffy (Colleen Clinkenbeard), Nami (Luci Christian), Tony Tony Chopper (Brina Palencia), and the rest of the Straw Hat Pirates fresh in just about every fan in check. Now getting close to the two-decade mark of the franchise's lifespan, it's high time that Eiichiro Oda's creation somehow gets a true taste of gold in their mouths. While it's not the famed treasure of Gol D. Roger, One Piece Film: Gold -- the thirteenth movie for the series -- still manages to be an entertaining time for both viewers and even the characters themselves.

One Piece Film: Gold has our anti-heroic pirates docking onto Gran Tesoro, a ship so enormous that it's been declared an independent country. Once there, the crew finds themselves immersed by the amount of gold that has encompassed their surroundings. Buildings, cars, and even go-go dancers are drenched in the color of pirate booty. However, it's when Luffy and the gang run into the ruler of the country -- Gild Tesoro (Keith Silverstein) -- when their luck quickly runs out. Soon, Zoro (Christopher Sabat) is captured and sentenced to death, and the only thing they can do to save him is to pay off their gambling debt. 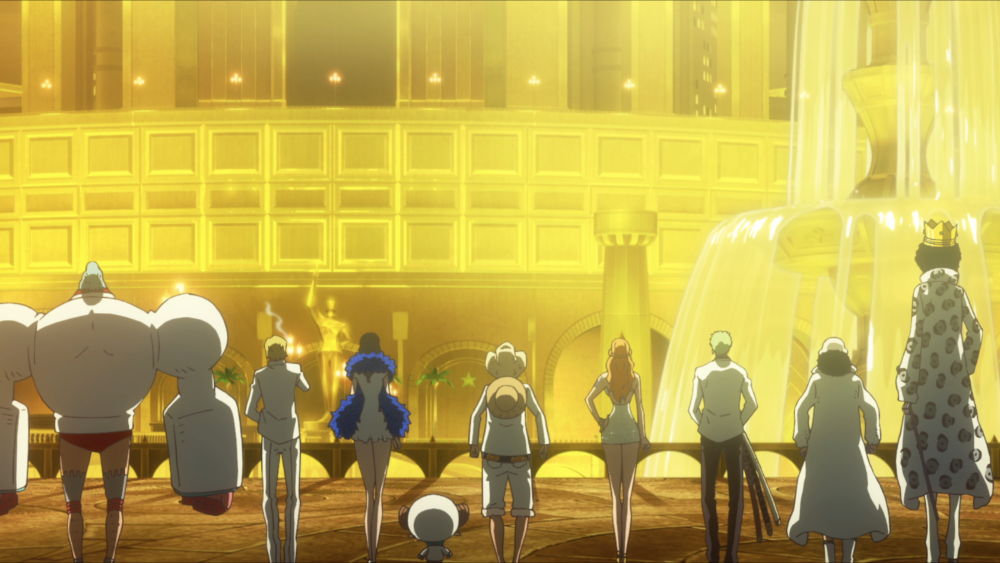 Once a friend's life is on the line, the Straw Hat Pirates quickly turn on their thinking caps, with the help of Nami's old ally Carina (Michele Knotz). Their mission to break into Tesoro's vault quickly transforms this One Piece film into Soderbergh's Ocean's 11, with Nami & Carina taking on the Clooney/Pitt roles in a feat of slickness and brains. Goofy tactics and fiery passions overtake the crew in order to save their pal, and when things seem to go belly up, that's when the real tasks of the crew are revealed.

It's nice to see that this film doesn't try to shove the characters' gimmicks down the viewers' throats like most film adaptations tend to do. Screenwriter Tsutomu Kuroiwa managed to focus on the key elements that make every one in the Straw Hat crew so likable, doing so without taking away anything from their traits. Also on-par are the action sequences -- be it a Grand Prix-styled race with muscular turtles acting as car engines or a fast-paced battle to survive a golden warfare -- all of which are presented in pure One Piece fashion: over-the-top silly with a dash of serious consequences. 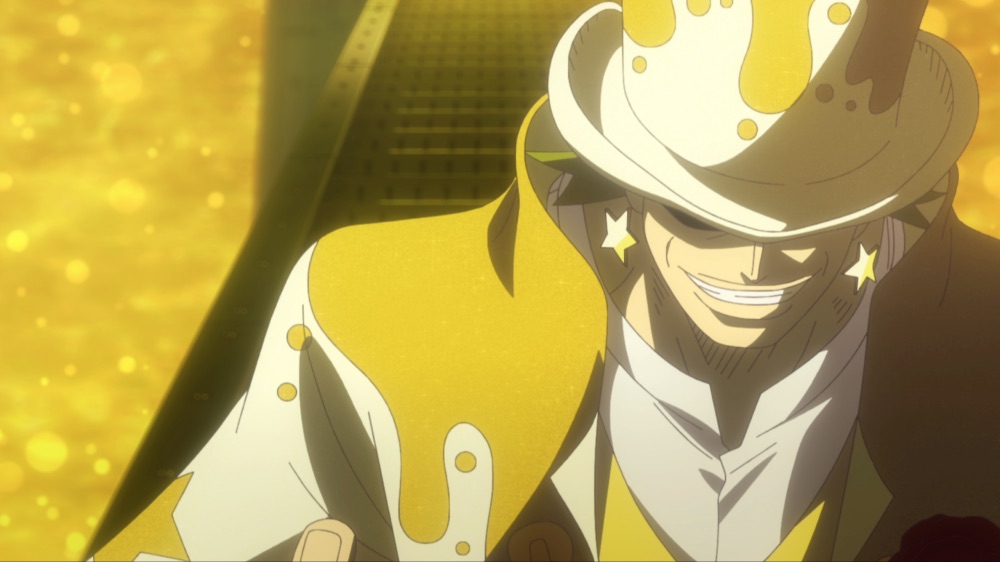 With the main English cast reprising their roles, it's clear that they've gotten quite comfortable with the characters they portray. However, it's still joyful hearing Patrick Seitz go full-blown powerhouse in his role as Franky and Ian Sinclair tickling every one's funny bone as Brook. Silverstein does a fairly good job with the villainous role of Tesoro, bringing a level of Dean Martin-infused charisma to his dastardly deeds. While Knotz's Carina proved to be a fun and wild ally, one hopes that the character gets expanded later on in the series, as her backstory is somewhat in need of fleshing a bit out.

While staying true to the TV series' animation style, One Piece Film: Gold still manages to be a marvel on the eyes. It's clear that director Hirokai Miyamoto and art director Kazuo Ogura wanted to pay homage to Abu Dhabi, with everything showered in gold from the cars to the building tops. It may seem like overkill at times, but one quick search online will show you that this is how the Middle Eastern city rolls (down to even ATMs that dispense gold bars). Nevertheless, the Midas touch works wonders in both bright and sparkly ways. 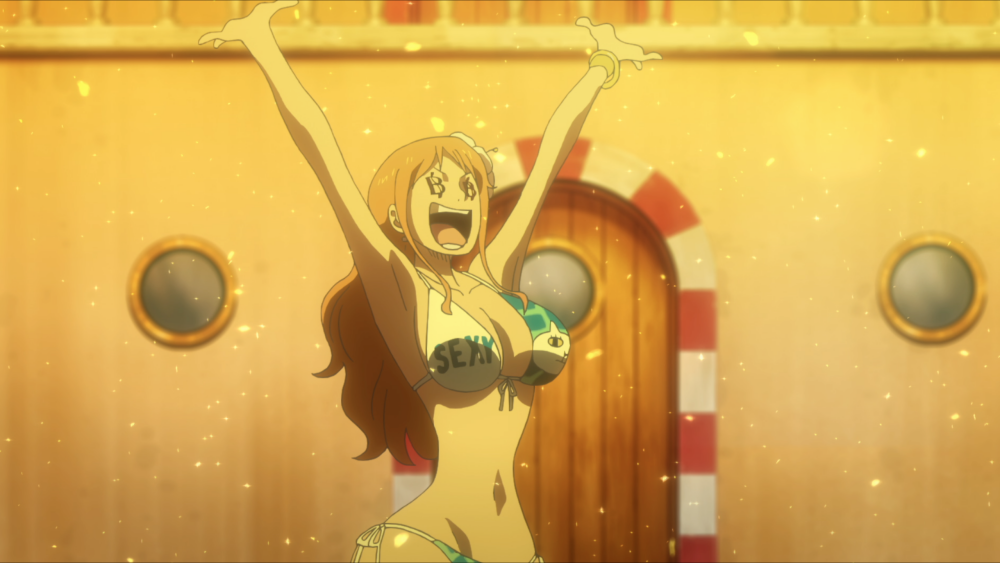 Besides the city of Gran Tesoro itself, the brightest of all the film's elements has to go to its score. Composed by Yuki Hayashi (Haikyū!!, Death Parade), the soundtrack blends so many different styles, from slick David Holmes-branded trip jazz and Ennio Morricone-inspired spaghetti western jingles to pounding orchestral pieces that boom with the same flair as a Hans Zimmer melody. Theme song "Ikari o Kure yo" by GLIM SPANKY is a hard-rocking screamer of a track, one that surprisingly fits in perfectly with an in-your-face battle on the violent seas.

Even though there may be some backstory required for a couple of supporting character cameos, One Piece Film: Gold is a fine stand-alone adventure with the Straw Hat Pirates. Action-packed, beautifully animated, and a little fun espionage thrown in for good measure, the latest journey for Luffy and the gang is one that both fans and newcomers of Oda's beloved franchise will surely enjoy. Needless to say, this is the sort of top-notched entertainment that only the future King of the Pirates can deliver.