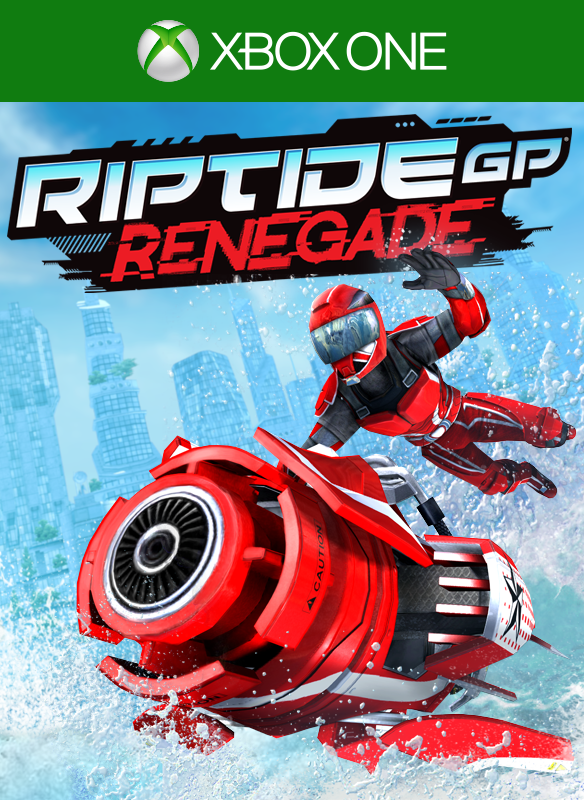 I'll admit that I have the biggest soft spot for arcade and kart racers. The likes of Mario Kart, Hydro Thunder, and Jimmie Johnson's Anything With An Engine have constantly placed a big grin on my face every time I put the pedal to the metal. Even when a racing game isn't all that perfect, there's often enough to keep my attention going until the next one hits the pavement.

This brings me to Riptide GP: Renegade, a popular mobile game that just got called into the console upgrade realm. Created by Vector Unit (who also made the brilliant Hydro Thunder Hurricane), the futuristic ocean racer has players going head-to-head on the prettiest and roughest patches of water imaginable. As you race, you can rack up extra points and fill up your boost meter by performing some tricks. Back-flips, walking on air, and many forms of spinning techniques are yours to master as you experience the speed and adrenaline that the game wants to give you. 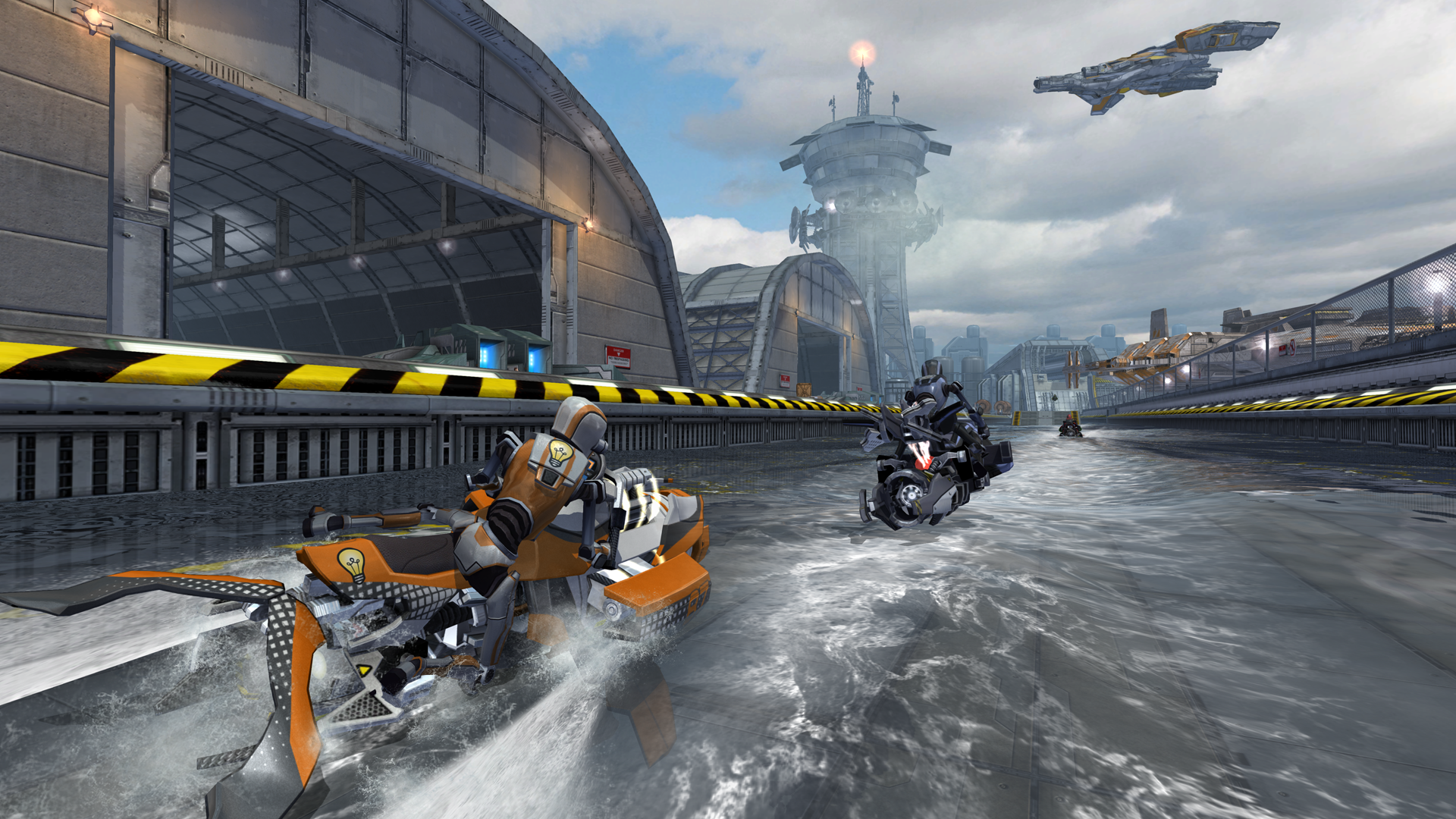 First things first, the level design for these tracks is stupendous. The oceans, the buildings, and even tiny things like ramps and forest backgrounds are brimming with futuristic-styled realism. Running at 1080p and 60 frames a second, the game also does a fine job with making you feel like you're experiencing every wave, bump, and boost that happens during a race. (Although it would be nice to see some company create an audience that didn't look like it was ripped from a PS2 game. Mind you, this is something the majority of racing games still get done wrong, not just Vector Unit.)

The fun part of Riptide GP: Renegade is when you get to pull off stunts while racing. While flying high in the sky, you use your two control sticks to make your racer attempt to maneuver a trick. These moves are somewhat in the same vein in as Tony Hawk's Pro Skater and SSX Tricky; some are real enough to attempt, others ridiculous enough to be known to be impossible. Land it right, and get some juice for your boost; screw it, and be knocked off your ride and risk losing a place or two in the rankings. 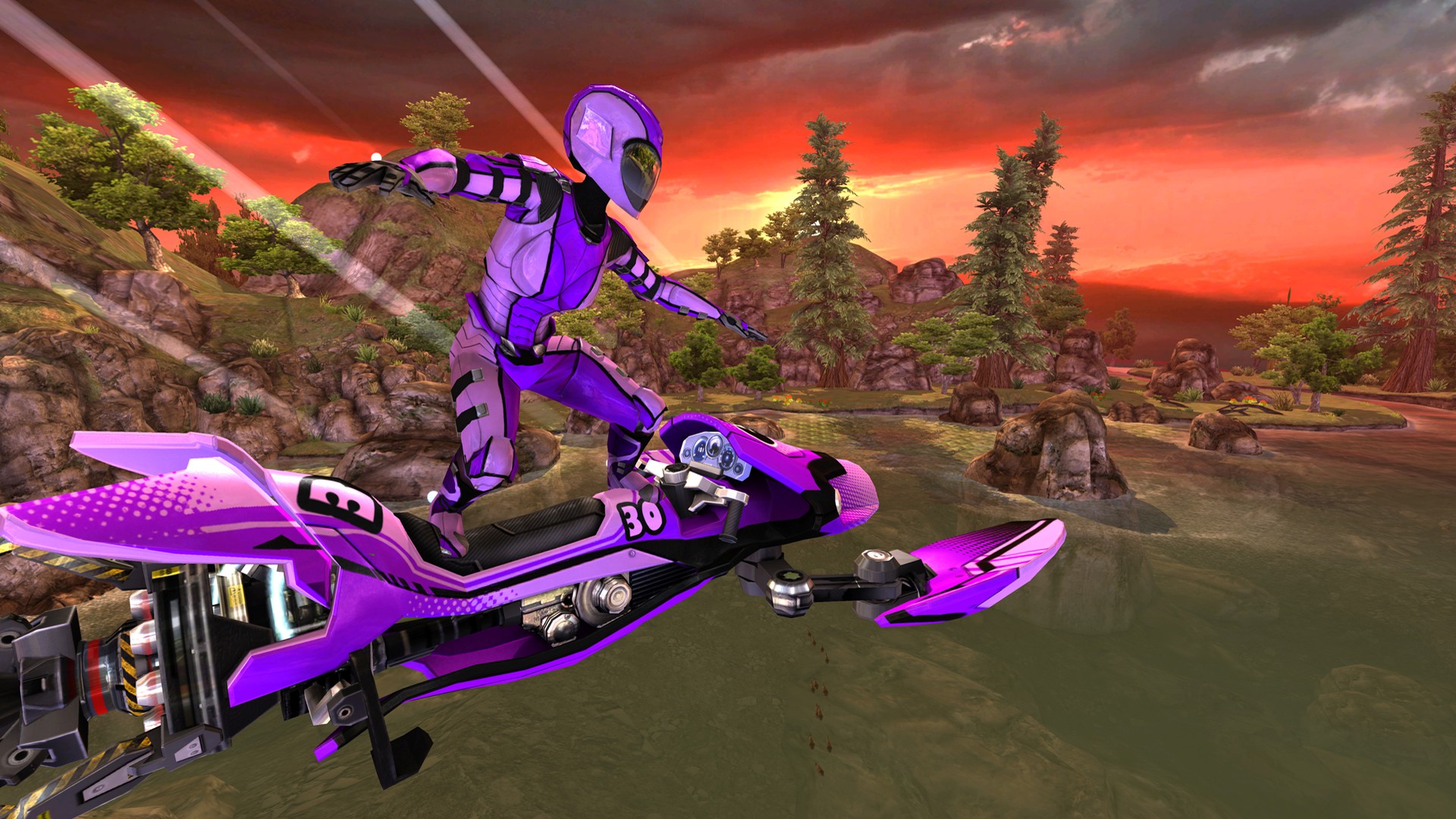 However, it's the actual race part that can lead to some frustration. While playing you may find yourself being chased by cops that'll keep you from scoring victory. I noticed that if I was in fifth place or lower, these officers would constantly target me, to the point where they'd slow me down and cost me a chance to actually win a race. This happened on nearly every occasion, and with your opponents' AI being a lot smarter than most racers, it's much tougher to nab the gold (or even second or third place) handed to you. Not since Sega Rally Online Arcade on the Xbox 360 has a racing game left me feeling very irked.

Perhaps the most questionable thing about Riptide GP: Renegade is its means of Career Mode. While the chapters, modes, and tournaments are all right, its story isn't all that original and unique. Your player recently gets out of prison, and you do your best to rise back up to the top of the racing circuit. There have been far too many racing movies that have had the exact same plotline, making the whole tale very predictable during its entire run. 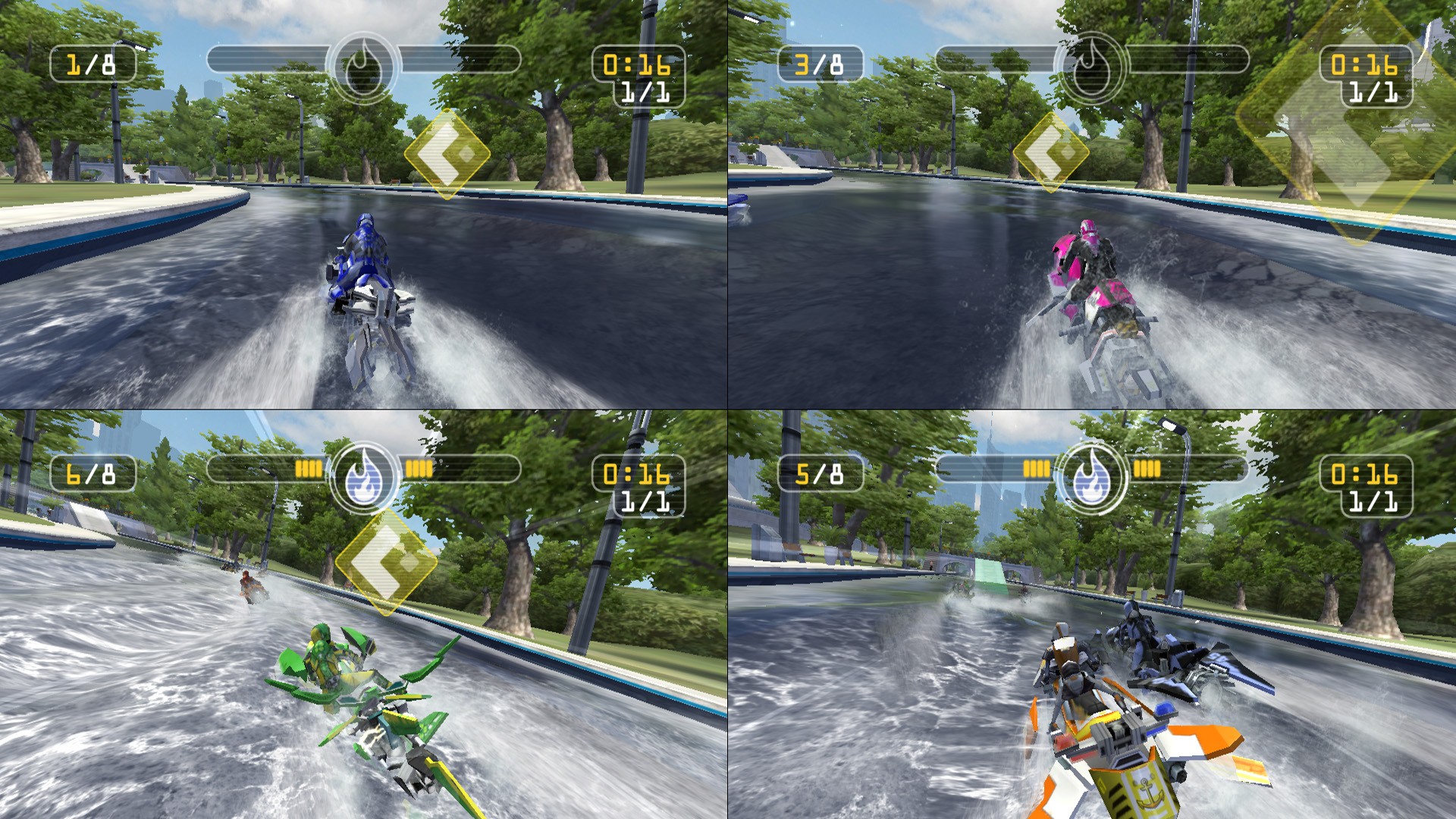 Thankfully, the flaws of the single-player mode are practically gone when playing online or via couch co-op. During my experience, I never had an issue with servers not working or failing to find a race on time. While I still lost plenty of times, I also took solace knowing that I was playing with some very talented gamers and not some overpowered AI system. Even if I tasted defeat, I still wanted to dive back in and attempt to steal a win from an unknowing opponent.

Although the Career Mode in Riptide GP: Renegade lasts a good few hours, it's worth returning to past races here and there to nab more money and skill points. Cash can be used to buy upgrades and pimp out your ride like a boss, with the ability to create thousands of different customizations. Skill points can also help with boosting your speed, harness better drifting, or even learn a new trick or two. Being able to concoct what you hope to be a monstrous racer makes it all the worthwhile to go back and win a couple older races in the long run.

While Riptide GP: Renegade does show off some pretty cool moves, it's overall presentation leaves a bit more to be desired. It's a beautiful racer, no doubt, but it's hard to have a lot of fun when you're being rear-ended at nearly every turn by the police. My hope is that Vector Unit can build off of the good ideas in Riptide GP: Renegade, and return with a much stronger showing next time. Still, for what it's worth, there's enough here to grab hold of any arcade racing fan's attention, even if it might be brief.

Promotional consideration provided by Derick Thomas of Plan of Attack Ltd. Reviewed on the Xbox One.