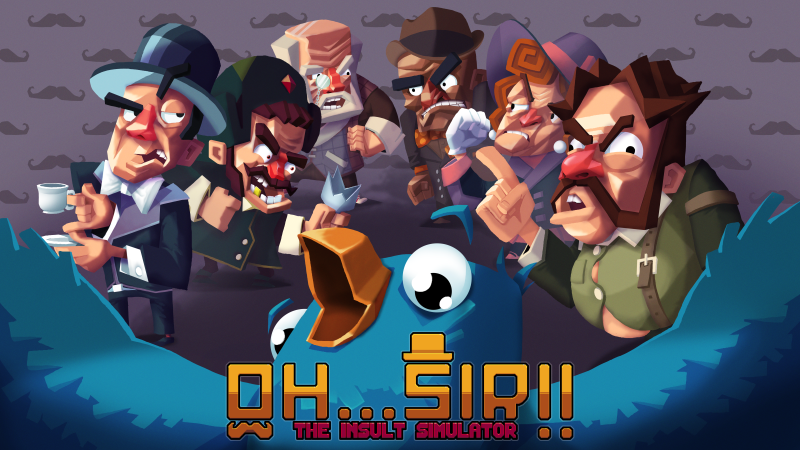 When it comes to the most funniest and vulgar displays of discontent, no one does it better than the folks of jolly ole England. Sure they seem like a lovely bunch, what with their fancy teas and Frank Turner records. Rile them up though, and you'll soon find yourself with your rear as bruised as your ego. So it seems fitting that somebody had to make a video game of this, and that's exactly what Vile Monarch did with their unique battle game Oh...Sir!! The Insult Simulator.

Oh...Sir!! has you face off one-on-one with a cast of Brits, whose greatest weapon just so happens to be that of the linguistic kind. You both take turns grabbing a piece of an insult, hoping to build up a stench of a sentence that'll dish out a huge dose of damage. Each character has its weaknesses, such as one's fashion sense, family members, and other tiny tidbits that -- if used right -- can deal out more punches than a fancy mustached boxer from the early 1900s. Win the battle, and your opponent will bow gracefully to your more prowling mouth. 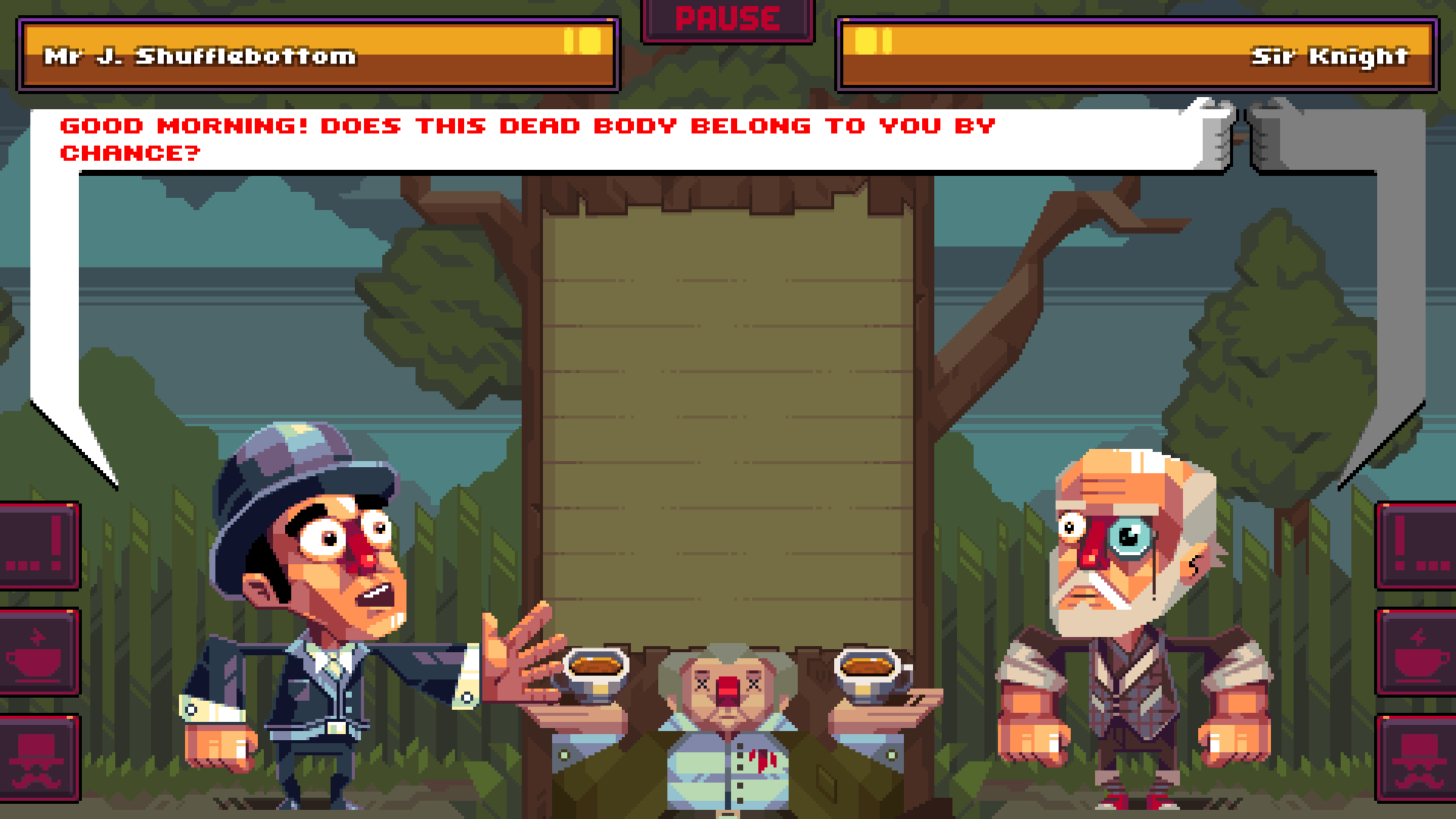 What makes Oh...Sir!! a challenge is that you share the same amount of insult-building words as your opponent. This means that prepping to build an insult is easier said than done, as they can easily steal the word or phrase you were about to use. Thankfully there is an option to grab a couple extra words from your own personal collection, with a mere sip of tea changing them out if needed. The longer and more coherent the insult you craft, the more likely you'll deal a verbal knockout.

It's apparent that Vile Monarch pays many homage to the likes of Monty Python, Benny Hill, and the works of Rowan Atkinson through this game. Dead parrots, strange corpses used as tables, awkward train rides, and even a battle with God Himself are all presented with the right English tone, acting more as kind nods rather than rip-offs. It even knows how to go for the jugular with some nasty British cuss words and exclamations, although it does keep things PG-13 for the most part. (Here's hoping they add some DLC with some more R-rated quips in the near-future.) 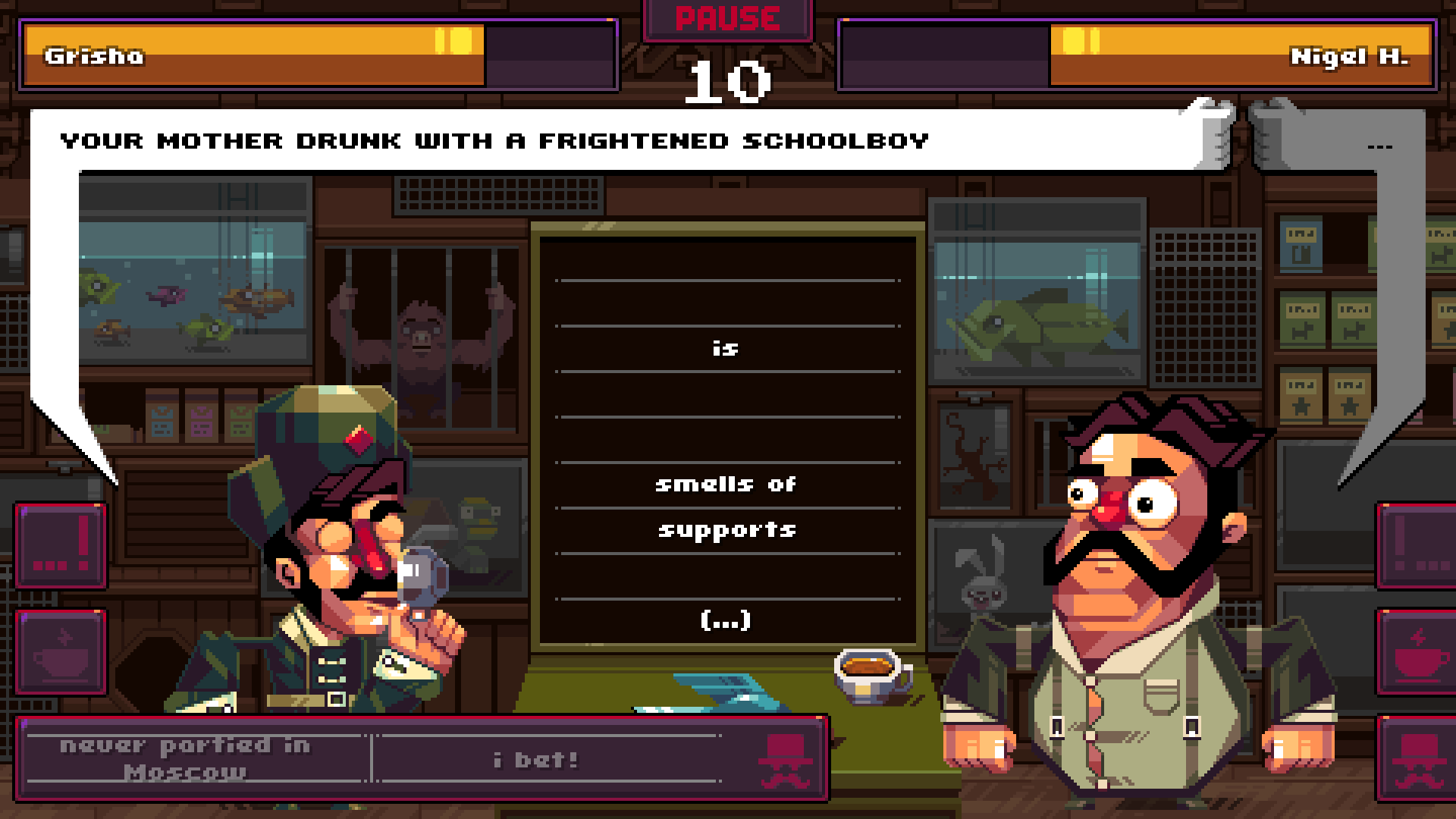 Single-player mode in Oh...Sir!! The Insult Simulator will take under an hour to beat, which keeps the gameplay from fully being stale. Still it would've been nicer if they had random stories that could be brought upon via the kinds of characters you can play. However the real fun is taking the game online, where you and a friend (or a complete stranger) can fight it out like vulgar aristocrats. There is quite a bit of a wait in the lobby for someone to show up at the moment, so here's hoping word gets out on this silly little game.

As the saying goes, sticks & stones may break my bones, but British insults will get ya in the bollocks! Oh...Sir!! The Insult Simulator may have its shortcomings, but it's certainly good for a few laughs with your closest pals. At the very least, it's more fun than one of Theresa May's stag parties.

Promotional consideration provided by Evolve PR. Reviewed on the PS4.

Background Noise: Monty Python Sings by Monty Python - When it comes to British humor, the Pythons always reigned supreme. Pairing up their song collection with Oh...Sir!! The Insult Simulator is as natural as grouping together egg & spam, especially when it comes to such classic melodies as "Never Be Rude To An Arab," "Bruces' Philosophers' Song," and "Medical Love Song." It's the kind of combination that even the finest transvestite lumberjacks will approve of.