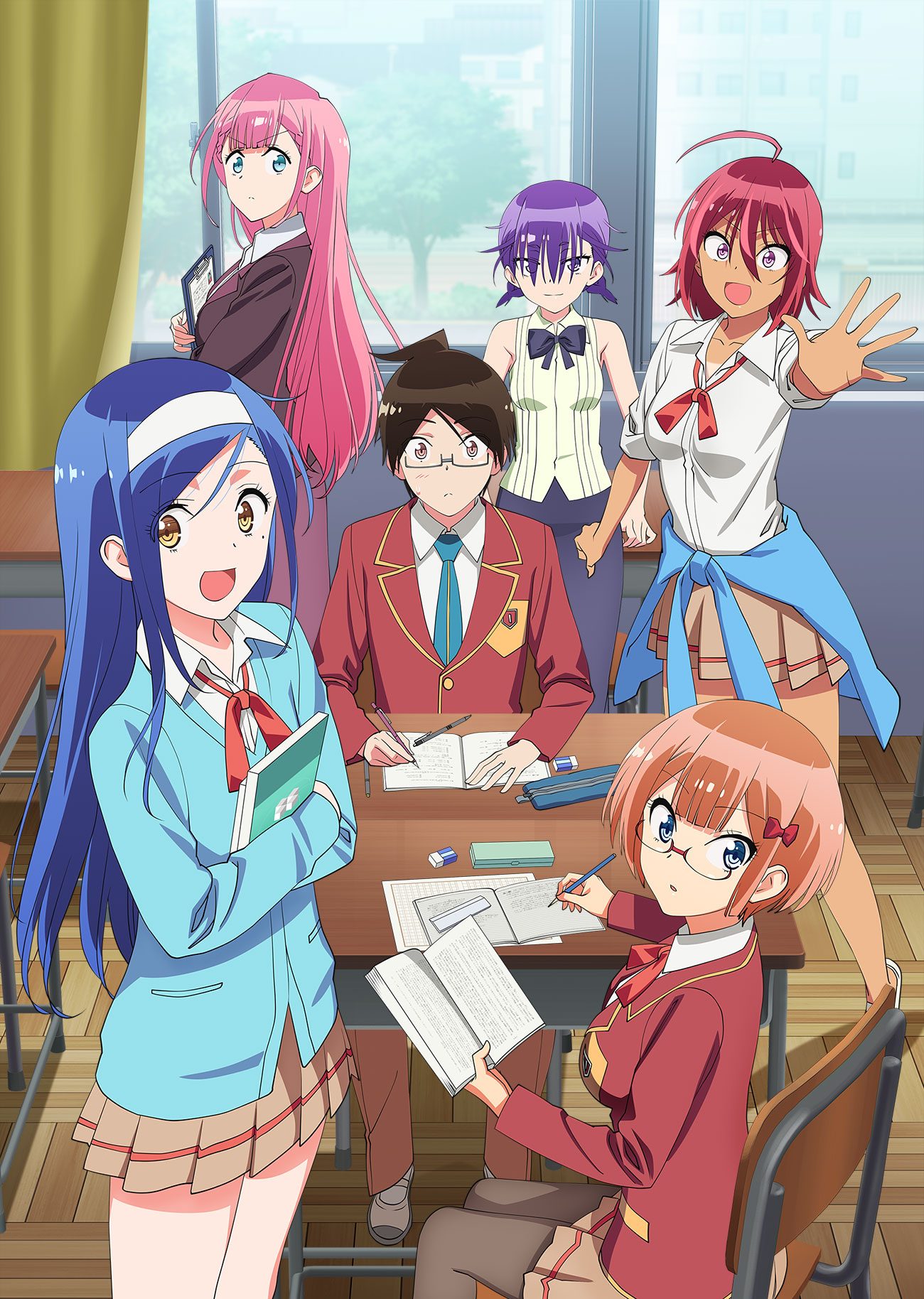 ANIME REVIEW | "We Never Learn" Worthy of the Dean’s List

Taishi Tsutsui’s We Never Learn is an enjoyable manga series. It has a great cast of characters, a lot of solid plot, and a more believable showcase of female characters growing fond of their male counterpart. But man, there are parts of it that can drag, with some storylines not knowing when to wrap things up. Director Yoshiaki Iwasaki (Love Hina) must’ve realized this when he was tasked to adapt it into an anime over at Studio Silver and Arvo Animation. With the aid of scriptwriter Gō Zappa (Blend S, Beatless), the anime adaptation of We Never Learn not only brings the series truly to life, but it gets rid of some of its unneeded filler.

Like the original manga, We Never Learn follows the story of Nariyuki Yuiga (Ryōta Ōsaka), a poor third-year student with very good grades. He aims to get a scholarship for the college of his choosing, an opportunity that falls on his lap right when he needed it. However, there’s a catch: he must tutor three intelligent students in the subjects that they’re the worst at. As such, Nariyuki aids students Fumino Furuhashi (Haruka Shiraishi), Rizu Ogata (Miyu Tomita), and Ukuka Takemoto (Sayumi Suzushiro) with getting their grades back up to par, as they aim to get into the colleges where their true passions can be fulfilled. 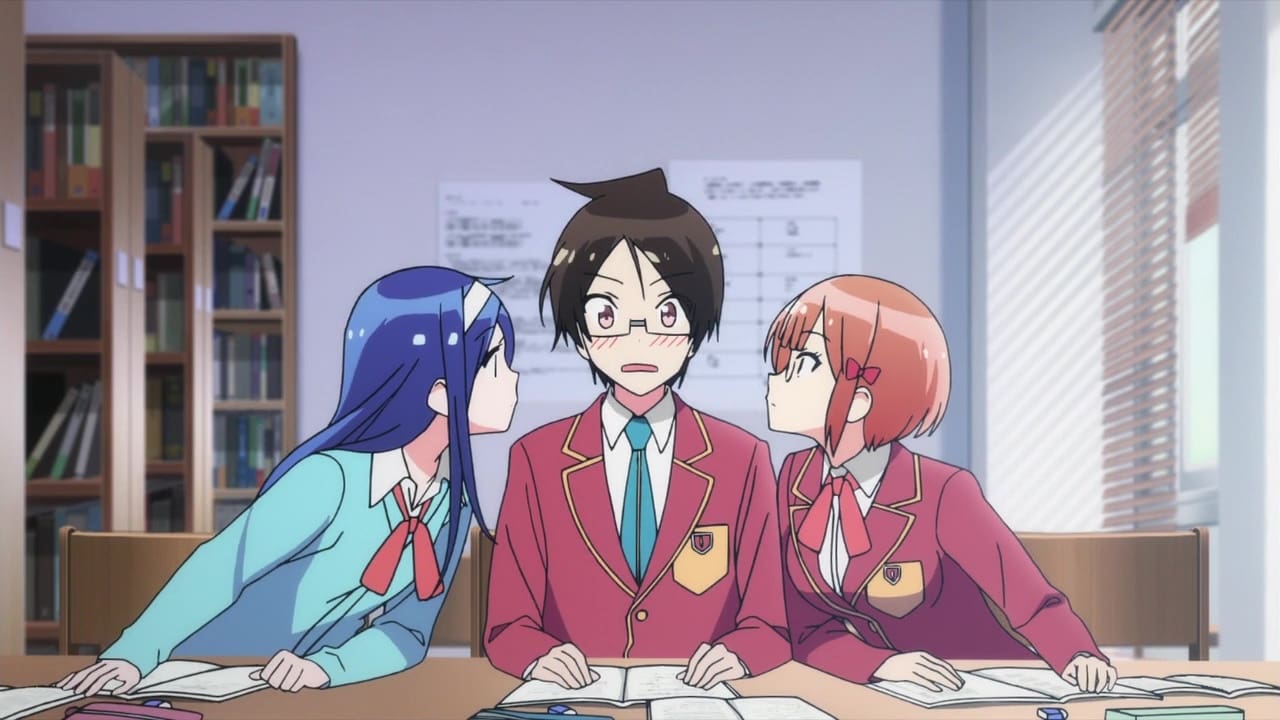 At first glance it’s your run-of-the-mill study buddy anime, with hints of romance sprinkled throughout its storyline. We’ve seen this done many times over, with the most recent being last winter’s The Quintessential Quintuplets (which, let’s be real, kind of sucked). However, what makes We Never Learn a more fun and uplifting story is the reasons behind the three girls wanting to up their grades. Fumino is bad at math, which is required for a science degree so she can study the stars. Rizu lacks arts & literature skills, but wants to learn about human emotions that those studies require. Meanwhile Uruka wants to become a champion swimmer, but is such a poor student that she may be unable to score a scholarship to any college due to her constant failing.

As such, Nariyuki has a huge weight on his shoulders as he does his best to get the three students’ grades up, all while keeping his scores well enough to get that needed scholarship. Thankfully, even when times are tough, the students and tutor deliver a major can-do attitude that helps them persevere throughout their hardships. They support one another, and — despite many a misread situation — always manage to be as good friends as they are study buddies. The series may be called We Never Learn, but it’s very surprising to see how much these characters smarten up & evolve as the show progresses. 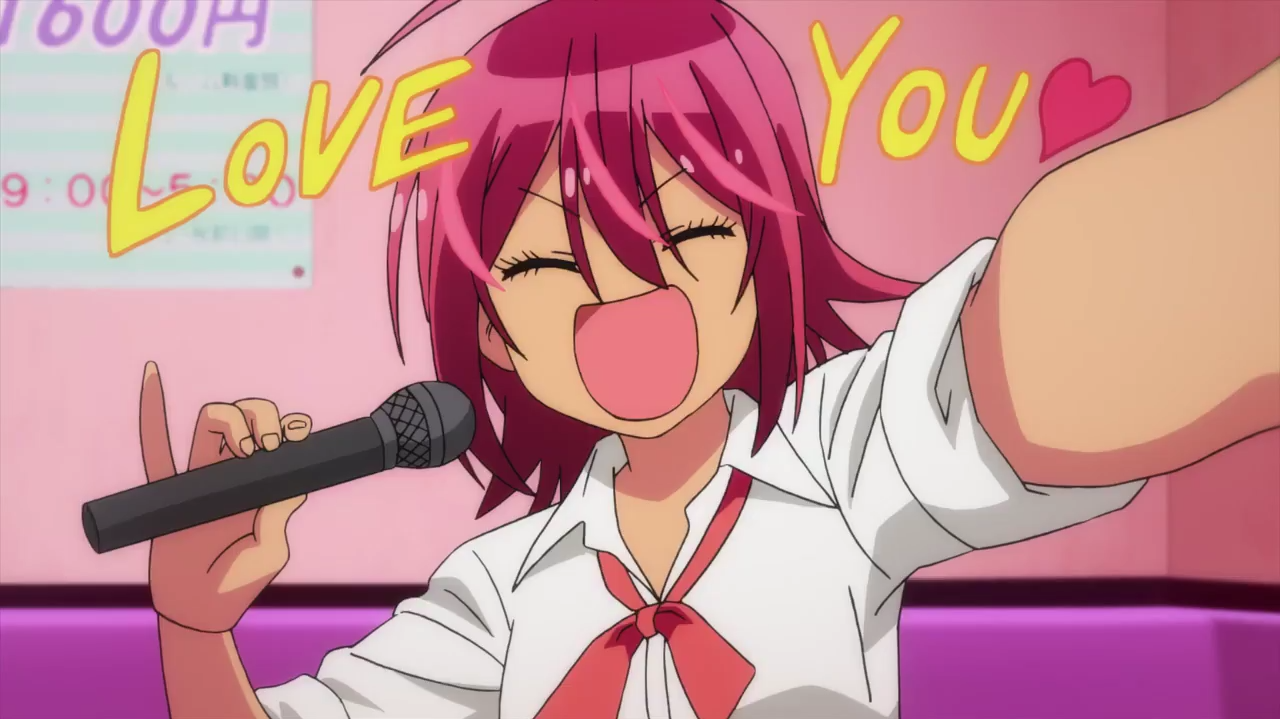 One such person to learn from this series is scriptwriter Zappa. Rather, he has taken the initiative to whittle down some of the more elongated plot-lines that took up a wee bit too much time in the manga. Unnecessary conflicts with former tutor Mafuyu (Lynn) are cleared up accordingly rather than stretched out to sigh-inducing lengths, which created more eye-rolls than tension. However, it’s the pacing that’s fixed from Tsutsui’s original series, as chapters involving things not involving the plot being either cut out entirely or — in the case of Rizu’s glasses story — crocheted into another storyline rather than be the focus of the main plot.

Being a rom-com helmed by Iwasaki does bring a lot of Love Hina-styled familiarity in the humor department. Yes, the three main girls start to show feelings for Nariyuki, but it’s presently rather cutely instead of forcibly. There’s a certain realism on how these girls start to fall for their tutor, as it doesn’t just make it happen with the snap of one’s fingers. Their emotions build up, to the point where the romance happens right when they least realize it. And when their eyes widen on how they truly look at their tutor, it’s more of an “aha!” moment rather than an “ugh!” one. 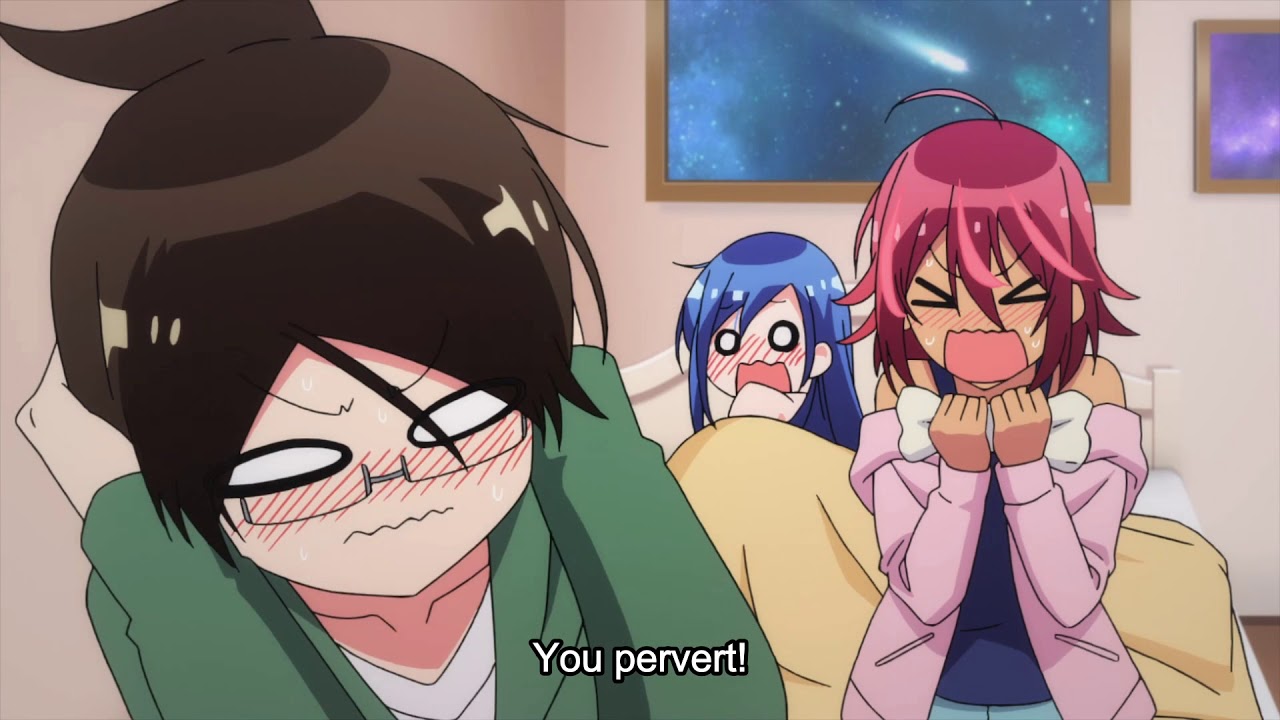 Of course, We Never Learn can be very fan-service-y with its visual gags. There’re your boob jokes, Nariyuki accidentally seeing one of the girls naked, butt shots, and your usual magic steam-filled visuals. Thankfully, director Iwasaki has a knack for making even the most used perverted joke feel both fresh and worthy of a laugh. A great example of this is when Nariyuki and the girls test the theory of studying in the bath, with the tutor’s accidental interactions over the phone resulting in some very funny and perfectly-timed facial expressions.

All of this is presented with glee via the voice cast. Ōsaka’s Nariyuki delivers a good big-brother vibe to the rest of the main cast, with his expressions ranging from mature to exasperated. Shiraishi’s Fumino gives a performance that’s both dim-witted and good-natured, whereas Suzushiro’s Uruka has just the right amount of spunk & energy that matches with her character’s personality. However, it’s Tomita’s Rizu that showcases a strong adorableness in her presentation, with her kind heart and sometimes pouty ways that would make even the most grimacing viewer crack a smile. 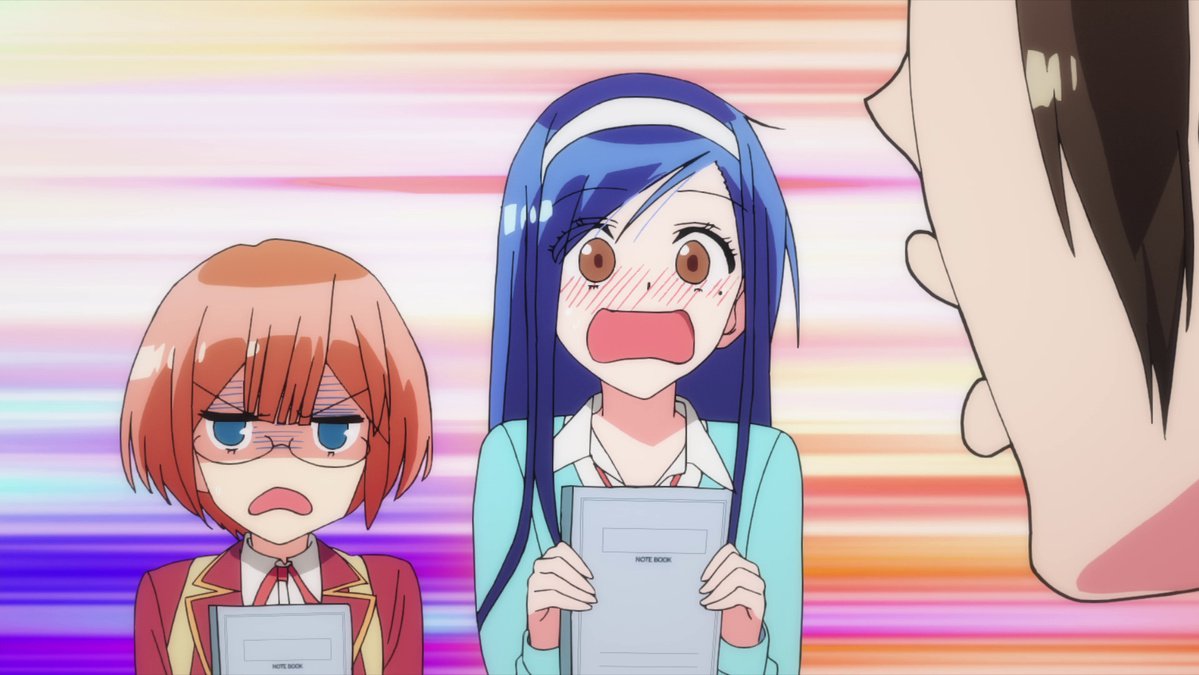 Animation-wise, the dual studios of Studio Silver and Arvo Animation capture the vibe of We Never Learn well. The comedic elements of the series shine brightly thanks to some well-animated visual gags, which bring to mind some of the better rom-coms of the early 2000s with a much-better coat of paint. There are some moments where the series can look a little stale, but fortunately the voice cast makes up for any lack of personality found in the background. It’s not perfect, but both studios do a good job with recreating Tsutsui’s original looks.

Composer Masato Nakayama (Occult Academy, Rosario + Vampire) gives off a pretty good score that fits well with the show’s comedy. With that being said, it doesn’t quite stand out as many other rom-com scores of recent memory, so don’t expect to find yourself humming something you hear in its background. However, it’s the trio of Shiraishi, Tomita, and Suzushiro (under the name STUDY) that demonstrate two excellent opening and ending themes. The bouncy “Seishun Seminar” starts off every episode, whereas the dance-friendly “Never Give It Up!!” ends it all on a high note.

We Never Learn is a very good manga, but it’s an even better anime. Filled with big laughs and heartfelt moments, this adaptation demonstrates how to take a source material and add some much-needed polish to it. You may have a hard time trying to choose which girl should steal Nariyuki’s heart, but you will certainly feel an immerse sort of happiness as their relationships evolve throughout. With its nose in a good rom-com how-to book, We Never Learn delivers a strong mixture of smarts and naughty gags that anyone will immensely enjoy!

We Never Learn can be viewed on Crunchyroll, VRV, Hulu, and FunimationNow. It has been licensed by Aniplex of America. Episodes 1-10 were observed for this review. Promotional consideration provided by Crunchyroll & VRV.