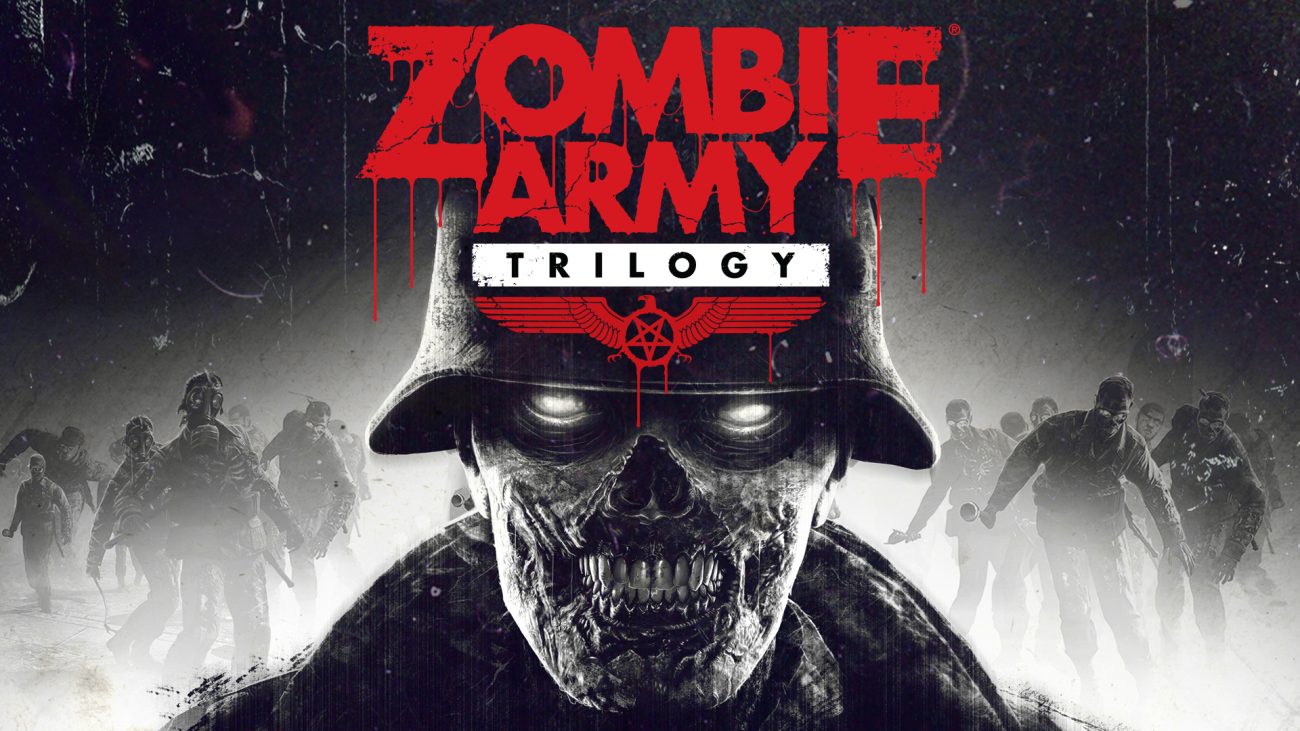 Rebellion knows how to keep its players on their toes. Their Sniper Elite series taught us about the art of precision, giving off a more realistic approach to wartime battles. Of course, Rebellion would want to get a slice of that fast-paced action that most people like to latch onto. So by taking a cue from b-movies, the developers wind up unleashing a Hell of a third-person shooter in the form of Zombie Army Trilogy.

Originally released in 2015 on PC, PS4, and Xbox One, Zombie Army Trilogy has made its way onto the Nintendo Switch, all in time for its recent fourth chapter. Mixing World War II with the occult, the story has the characters from Sniper Elite facing off again Hitler’s undead army. Members of the American, Russian, and even German armies are forced to team up to wipe out the zombies marching through the hollowed grounds, putting a final stop to Hitler’s reign of tyranny. But with the darkest of powers under the Führer’s belt, the task will be anything but easy. 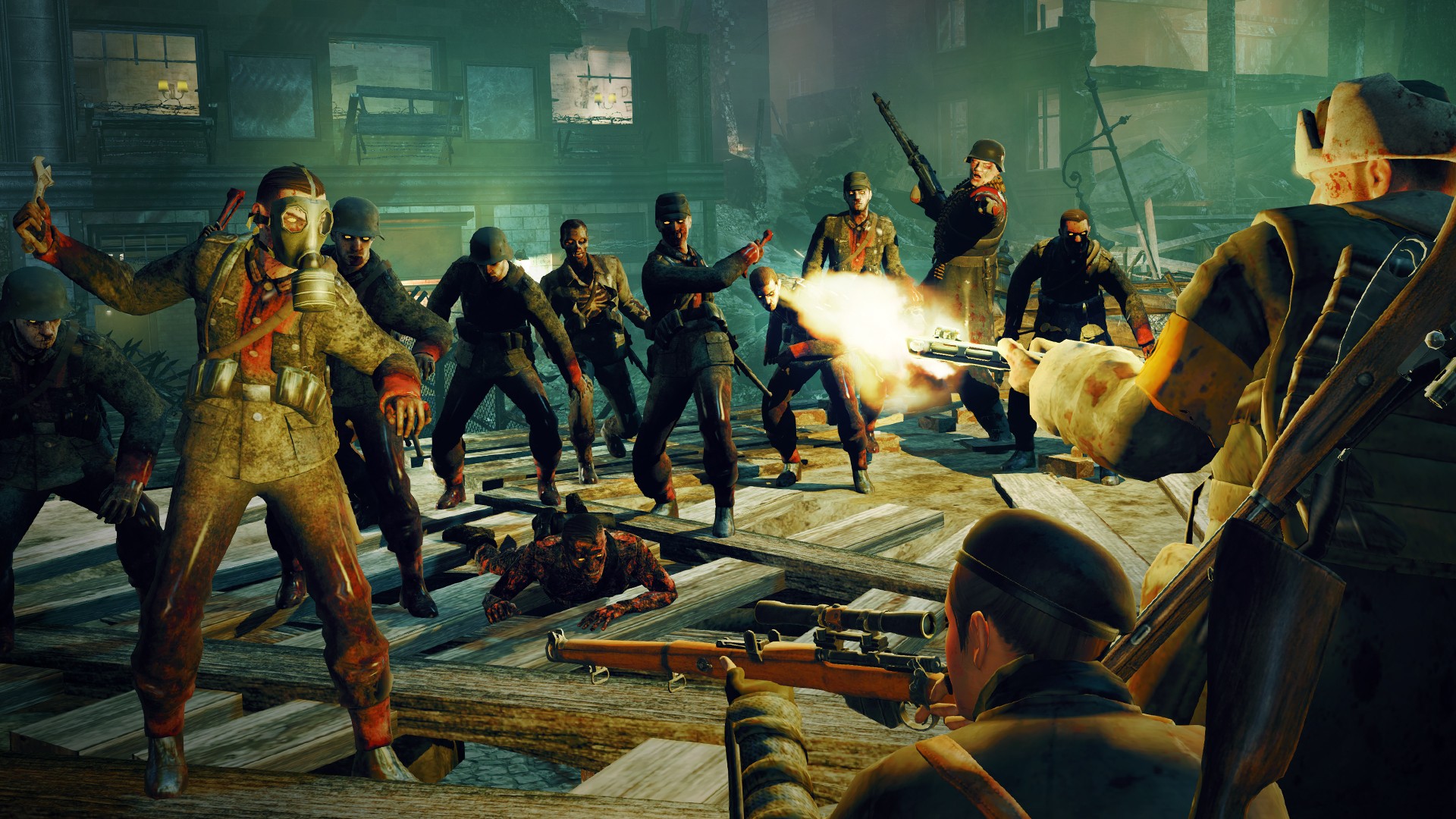 Playing with up to four players online (or solo), the game has you run through fifteen levels of Nazi zombie madness. It does a good job with getting players accustomed to the ways of the world, as the undead first show up in small doses. However, as you roam through each chapter, the numbers start increasing, with other kinds of zombies to deal with. Ones can be trapped in suits of armor, whereas others can explode when they get close enough to you.

Like in Sniper Elite, Zombie Army Trilogy makes you work for ammo, guns, and other means of protection. While some enemies may drop the occasional ammunition, it’s your skills with a gun that will truly keep you from running out. A simple shot in the gut or chest won’t stop the undead; it’s those headshots that will get the job done! Depending on the difficulty setting you have set, you’ll have to aim and time your breaths right before you pull the trigger and send a bullet flying towards your target. 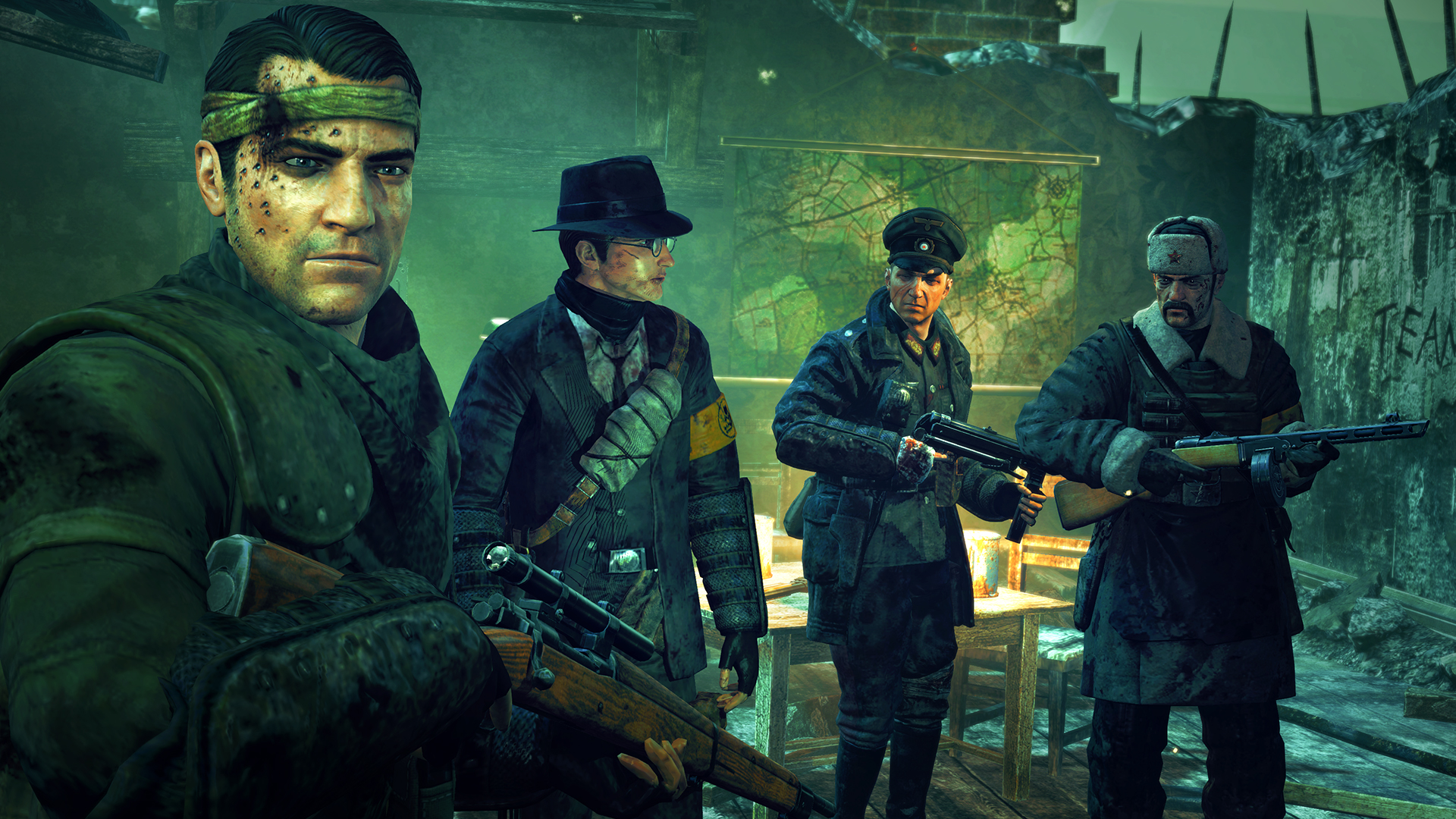 And believe me: when there are at least four of these Nazi zombies hurdling towards you, it’s hard to get a good aim in. As such, finding that perfect place to let your arsenal go crazy is of the upmost importance in your fights. Sometimes you’ll luck out and find a house you can go into, setting up shop in the attic and knock off some undead heads with grace. However, most times you’ll be stuck in open areas, blocked off villages, and dark shadowy castles. (That’s where playing the game with three others can come in handy.)

What I appreciate about Zombie Army Trilogy is that it never lets off the gas pedal. While you do get the occasional safe room to refill your ammo and switch off weapons, Rebellion makes most of the experience the kind that rarely ever lets you catch your breath. Although some of the zombies can be slow (with a few speedy ones to keep you at bay), the massive numbers that come your way make it very challenging to wipe them out with ease. Even when you have a couple other people playing online, the numbers will certainly overwhelm even the most veteran players of third-person shooters. 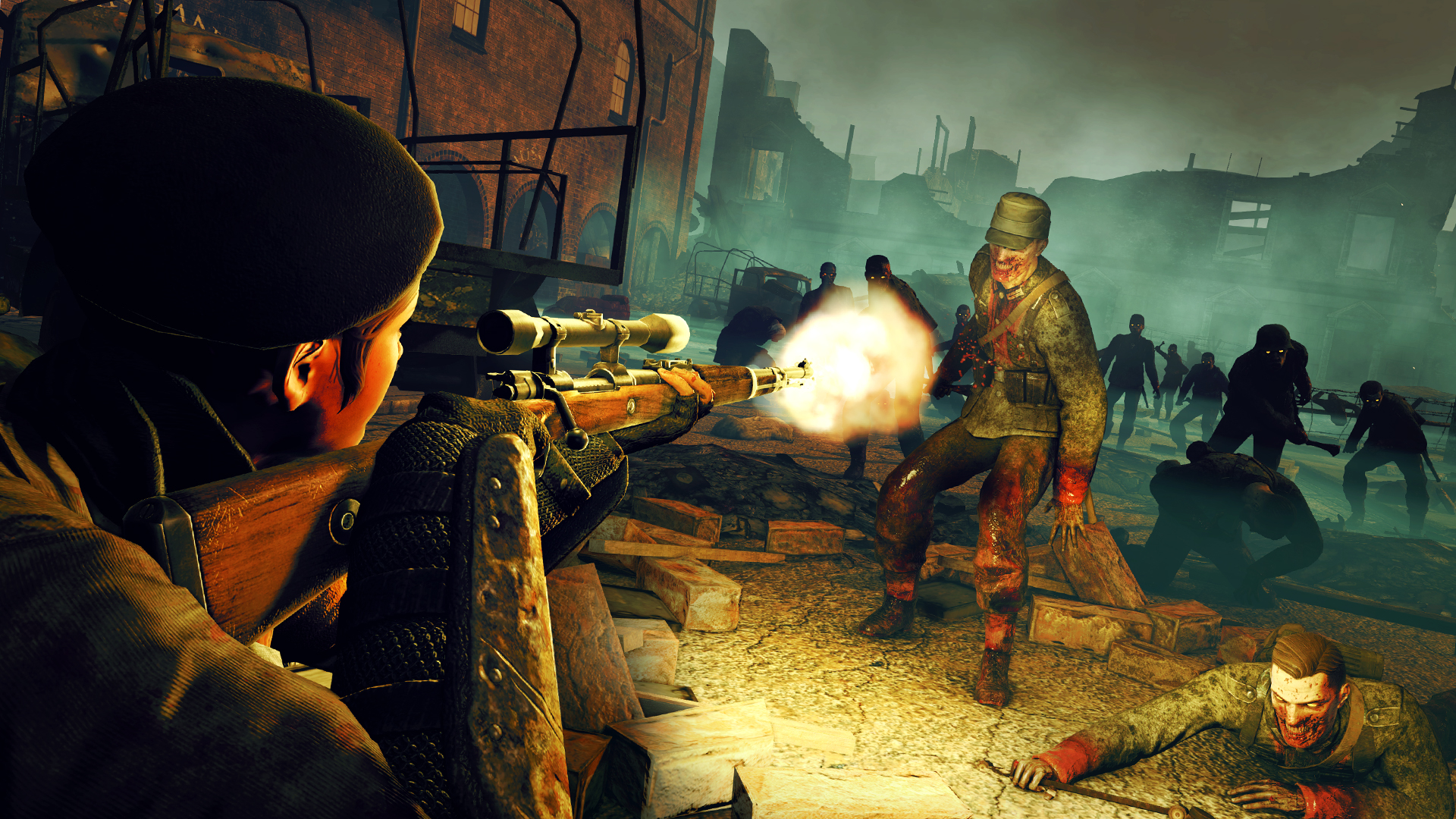 Unlike the Sniper Elite series, the story goes as far away from realism as possible. While there are rumors that Hitler actually dealt with the occult, it more than likely never reached as far as raising the dead. It embraces its campiness, while at the same time delivering a serious amount of intense gameplay all throughout its three parts. (It brings to mind when SEGA’s Yakuza released Dead Souls, only with far better shooting controls.)

Ported to the Nintendo Switch, Zombie Army Trilogy looks and feels great to play. While the game sticks to 30 frames a second, the visuals still impress in either docked or handheld mode. However, it’s the sound design that will send chills up players’ spines, with every zombie roar and growl filled with bone-shaking creepiness. Although not the scariest video game I’ve ever played, Rebellion managed to make me take deep breaths with some of the frights they delivered. 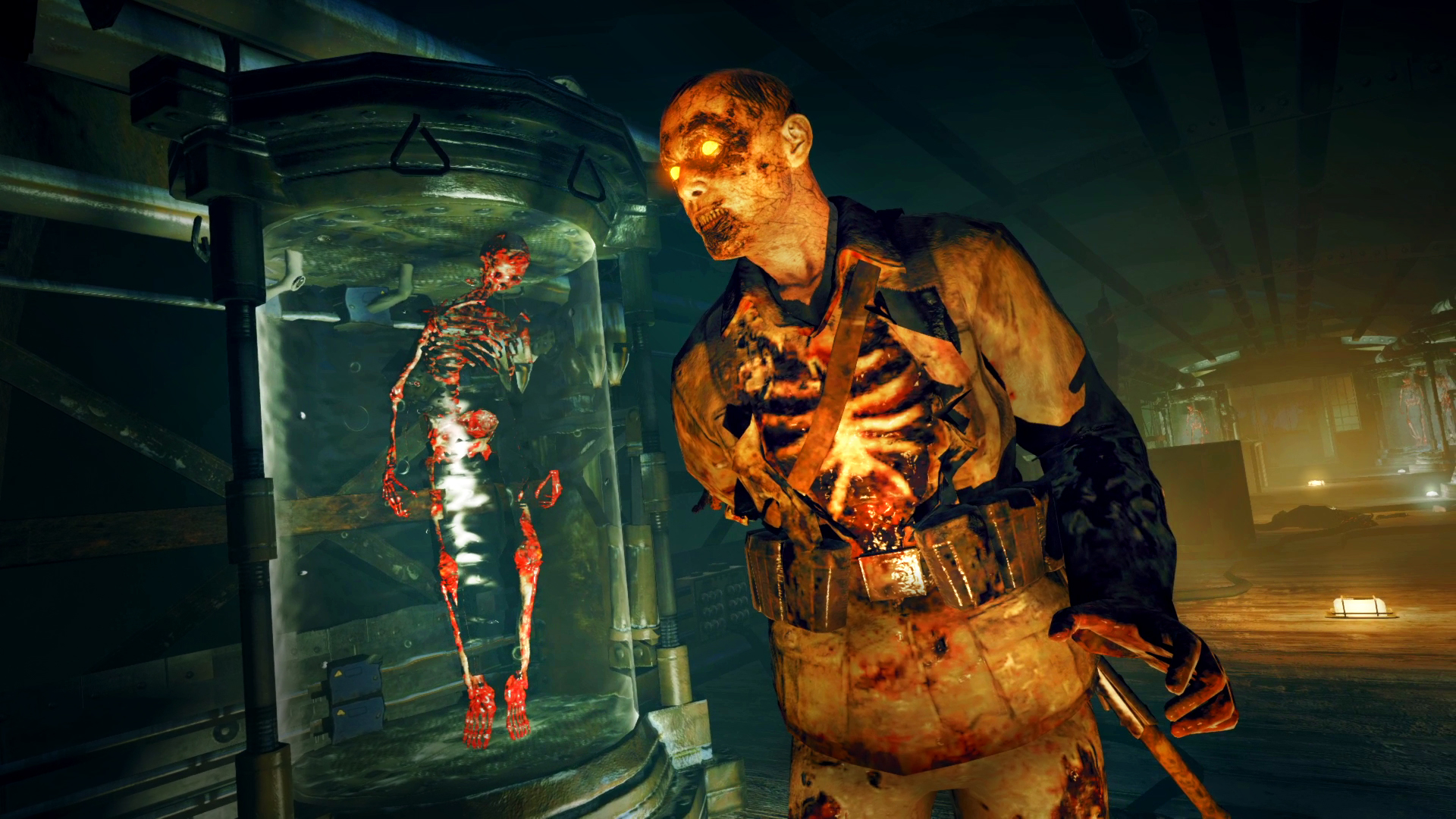 You can complete all the campaigns roughly in 13 hours, with each level nearly lasting an hour depending on your speed and skill. With loads of secrets and achievements to unlock, there are many reasons for revisiting past levels. Players can also find some endless fun in Horde Mode, where wave after wave of Nazi zombies will attempt to drag you into Hell.

Zombie Army Trilogy plays shockingly well on the Switch, delivering fun and frights around every corner. Fans of schlocky history horror films will no doubt eat up Rebellion’s shooter like an undead feasting on brains. It may be far from the realism that Sniper Elite usually delivers, but Zombie Army Trilogy nonetheless offers plenty of excitement that lovers of the main franchise will gladly risk their lives to play!