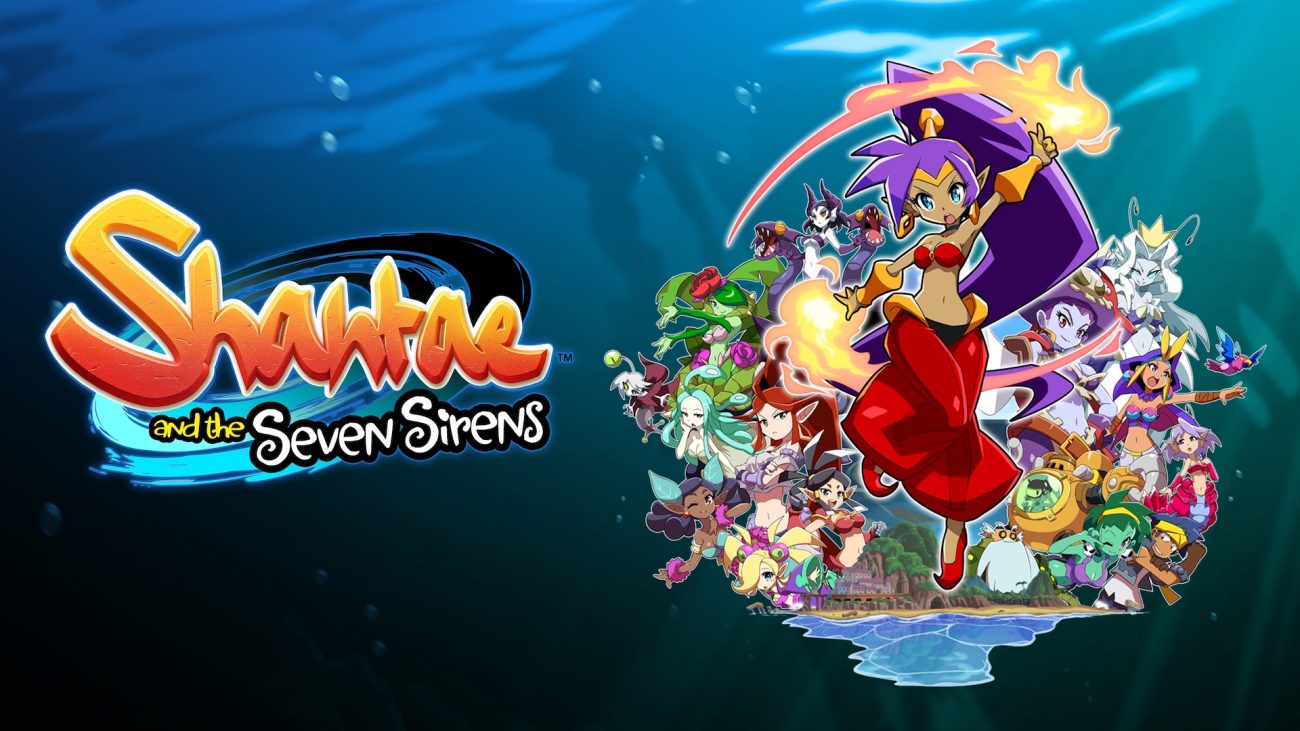 With a little dance and a touch of magic, WayForward’s favorite gal Shantae can take on any adversary she faces. Since her creation, the half-genie hero has faced off against ghost pirates, sea-faring creatures, and an annoying red octopus who whines about his lack of presence. It’s about time Shantae’s given a breather, with her sights set on vacationing with a few friends and other half-genies. But as you can imagine, heroes never truly get a day off, as evident by the game Shantae and the Seven Sirens.

The fifth game in the series, the story treads new ground with a new island location. Here, a half-genie festival is about to commence, with Shantae being one of the stars. However, as the celebration starts, the other half-genies vanish, forcing Scuttle Town’s bravest warrior to set off to find them. Running through the island, you come to discover new secrets about the locale, as well as a returning foe: Risky Boots! 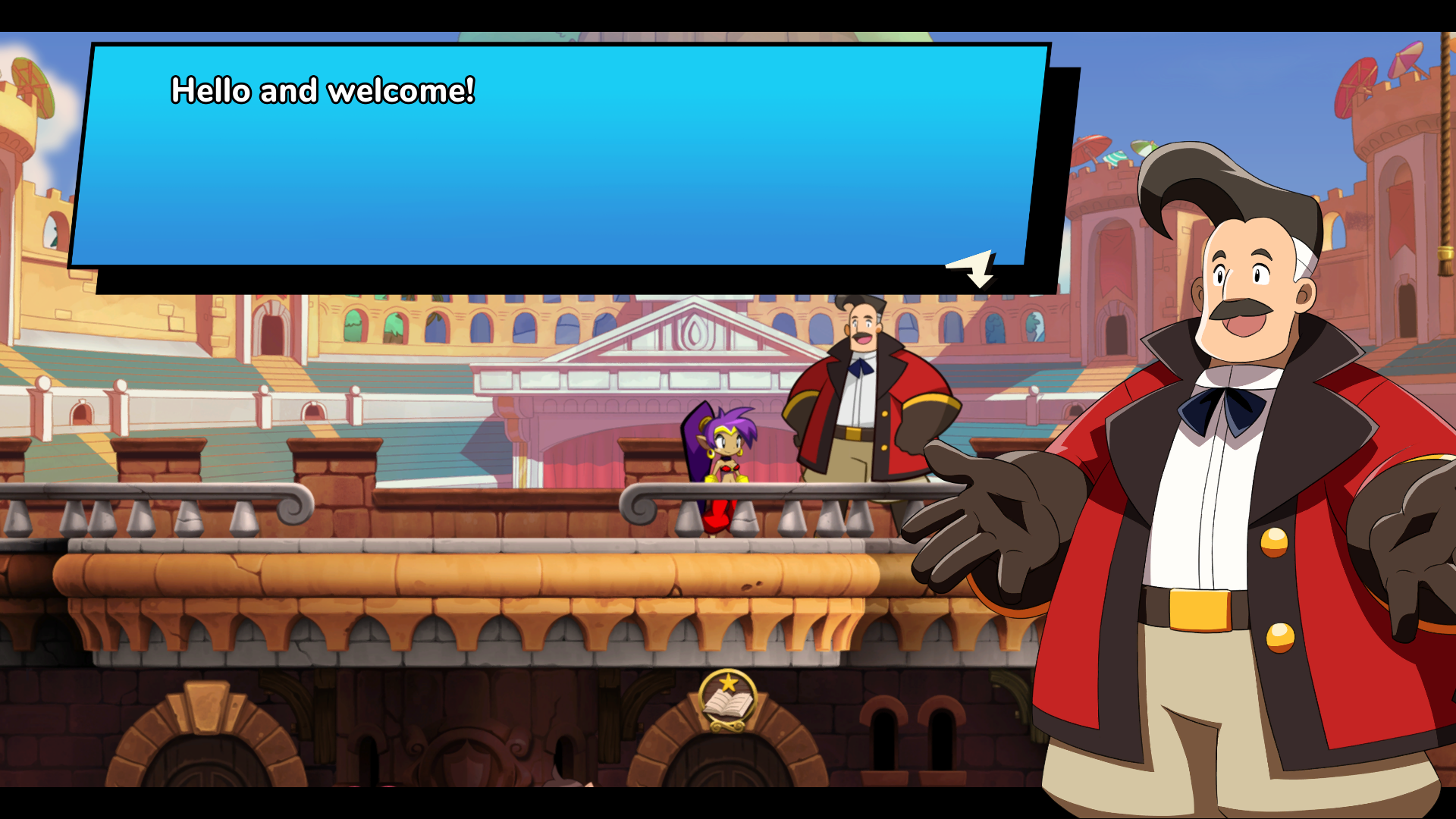 As you roam through the areas, Shantae will learn new techniques thanks to the collecting of Monster Cards. With enough of these, Shantae can boost her skills, ranging from faster techniques to taking less damage. However, the real new powers come in the form of Fusion Magic, which our hero earns whenever she saves a fellow half-genie. These powers will give her the opportunity to transform into a lizard, frog, octopus, tortoise, and shelled drill to get through new areas.

Unlike Shantae: Half-Genie Hero, Seven Sirens returns the franchise to the Metroidvania realm that made Risky’s Revenge and Pirate’s Curse such massive adventures. Playing through the game will have you revisiting areas for clues and hidden objects, some of which will lead you towards the truth behind the island. The deeper you go, the more tougher the enemies will become. As such, learning how to defeat (and sometimes evade) these new foes will require some keen strategy. 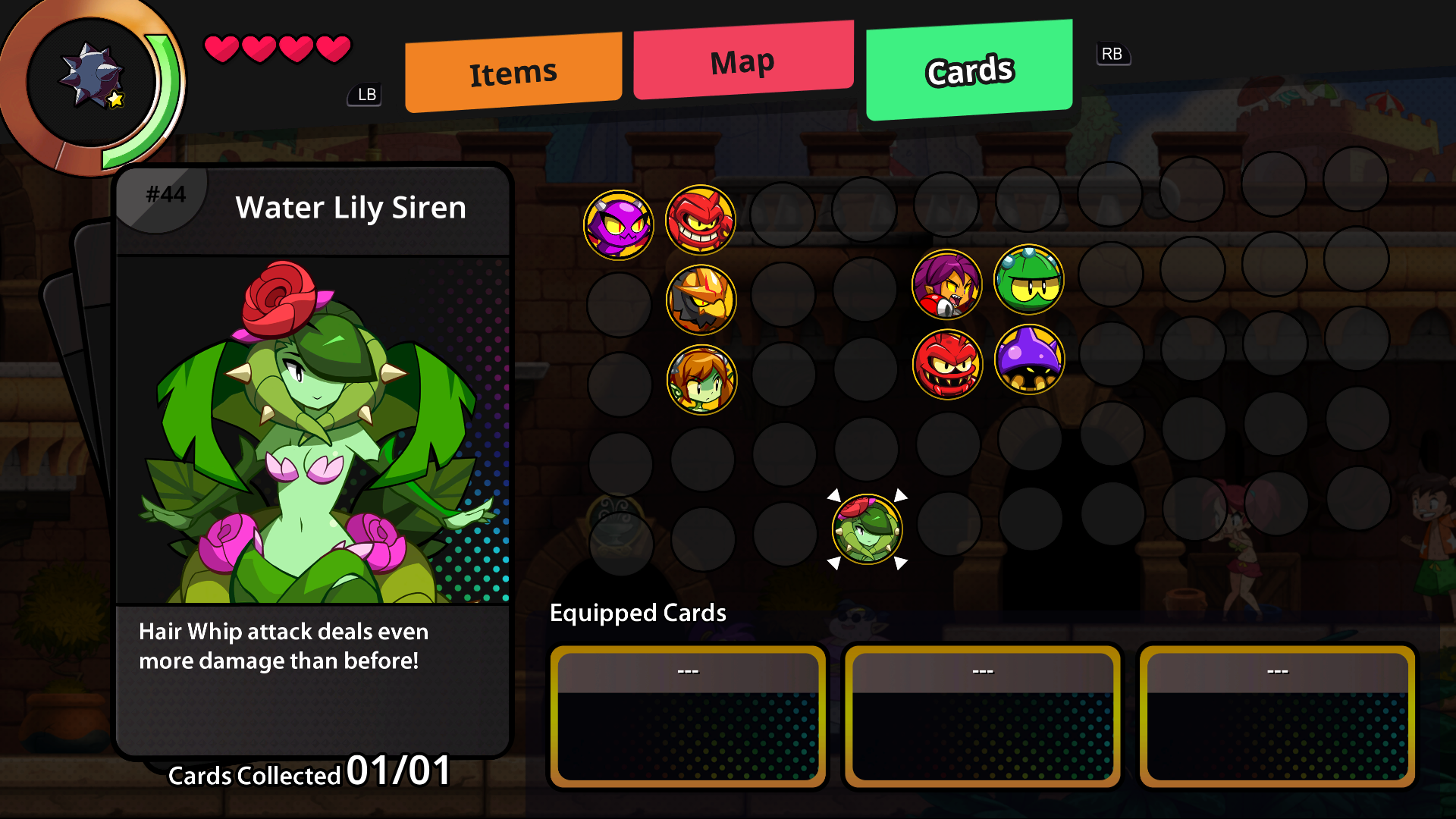 Said strategy comes in the form of the Monster Cards, which unleash new skills and powers that’ll aid you in certain situations. From climbing faster and dishing out more damage, these power-ups will aid you during even the toughest baddies you’ll run across. With a good combination on-hand, you’ll be able to dive head-on into battle with a sprinkling of confidence. Some cards will require the usage of gold that’s hidden throughout the island (similar to the Squid Hearts to up your HP), with their powers being all the more useful during boss battles.

And that does lead me to my slight issue with Shantae and the Seven Sirens. Its boss battles — while creative — can be somewhat short and too easy. Figuring out the strategy can take a moment’s time with a gander of an enemy’s movements. However, once you figure it out, victory can come a bit too quickly to feel any sort of danger. With that being said, later boss fights (especially the final one) will make you wish for the easier ones! 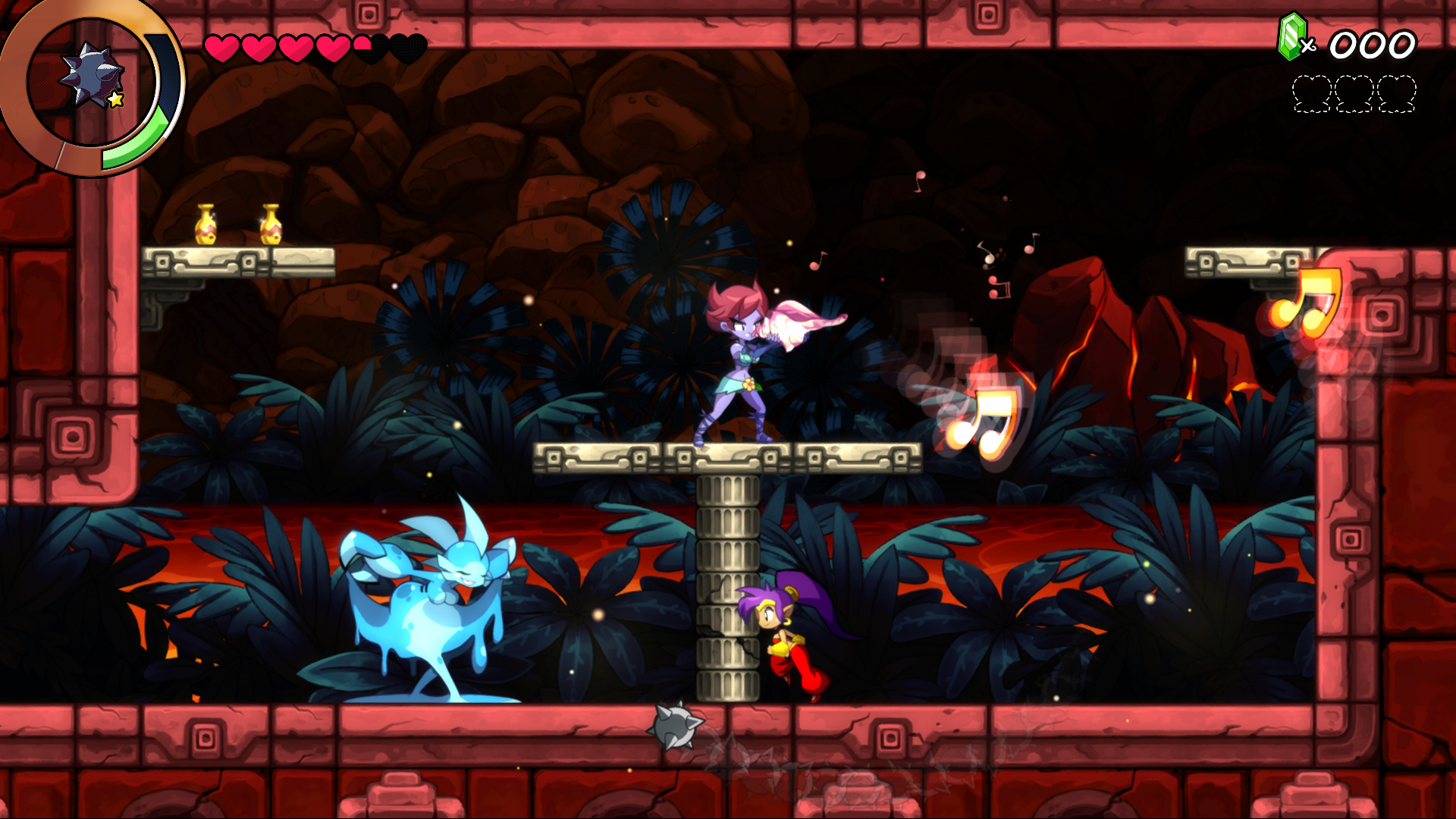 Controlling the game is surprisingly easy, with its button layout making it a cinch to unleash Shantae’s powers. Learning new maneuvers as the game goes on doesn’t pile on more moves to remember; it simply tweaks the current ones for your personal gain. Pulling out the dance moves for an extra oomph gives way to some earth-shattering and life-giving techniques, benefiting yourself while taking out some enemies in the process. (WRITER’S NOTE: due to my controller suffering from Joy-Con drift, I found myself playing the game with the D-Pad rather than the left stick. Surprisingly, it wasn’t difficult to play this way in the long run.)

Visually, WayForward has brought out one of the brightest and liveliest games in the Shantae series. Its hand-drawn animations and backgrounds brim with vibrant colors and expressive personalities. The storyline is as entertaining as past games, with some terrific voice-acting from Cristina Vee as Shantae and Risky Boots. For the first time, full-motion cartoons help to tell the story, giving players a taste of what an animated series starring the half-genie hero would look like. (A special shoutout to Little Witch Academia’s Studio TRIGGER for its opening animation, a prime candidate to bring a Shantae cartoon to the small or big screen!) 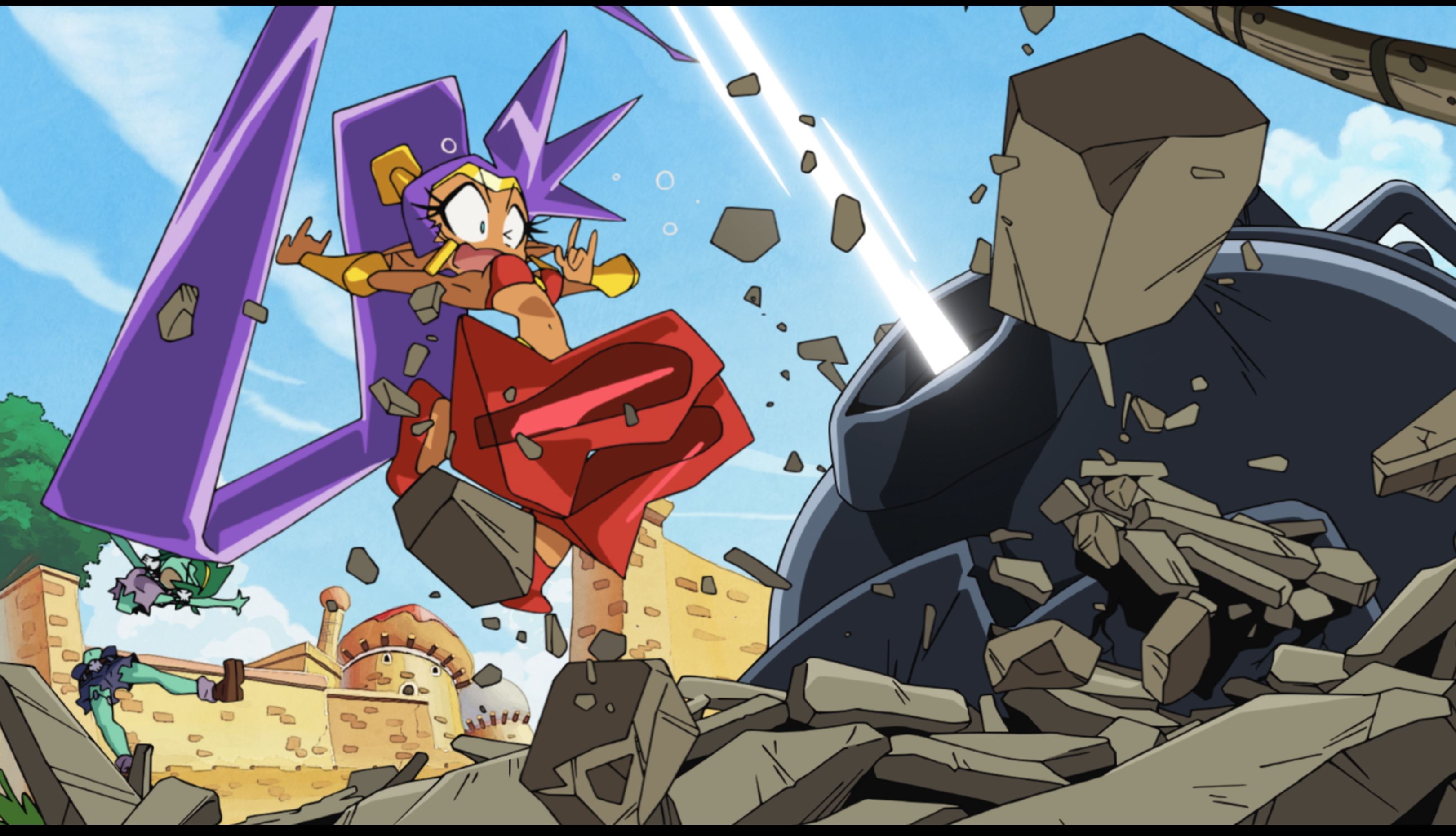 Although longtime composer Jake Kaufman was not involved this time around, the score made by Kentaro Sakamoto, Mark Sparling, Madeline Lim, Gavin Allen brings enough of the trademark Shantae sound to the game’s score. The mixture of chiptune, traditional orchestrations, and Middle Eastern music add huge doses of flavor for every moment that you witness onscreen. You’ll also have a hard time getting the opening theme “Rise and Shine” by Cristina Vee out of your head, as the quick song is not only catchy, but also stays true to the Shantae attitude.

Your first run-through of Shantae and the Seven Sirens will take you just over ten hours. Beating the first time around will give you the option of playing in New Game+ mode, giving players the chance to learn new magic skills with the cost of a bit of defense. Players looking to speed run and 100% complete the game will be rewarded with some special collectible win screens.

With its return to Metroidvania-styled gameplay, Shantae and the Seven Sirens shines as the most fulfilling game in its franchise. Its new world is a breath of fresh air for those itching to venture past Scuttle Town. Thanks to its new kinds of powers and attainable skills, Shantae and the Seven Sirens offers a unique, fun, and — above all — excellent adventure for all to enjoy.

Promotional consideration provided by WayForward. Reviewed on the Nintendo Switch.

GAME REVIEW | Returning to the Mad...