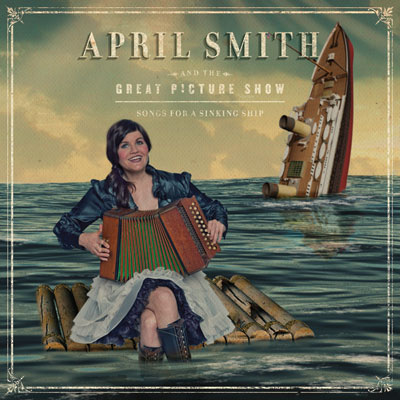 When Pandalicious, Nenya and I went and saw Amanda Palmer perform with the Boston Pops this past New Year's Eve, we headed on over to the bar for some drinks. To our surprise we discovered an up-and-coming ragtime band by the name of April Smith and the Great Picture Show performing in-between Symphony Hall's two bars. After I downed an Appletini I went and pre-ordered their upcoming album Songs For A Sinking Ship, which arrived at my doorstep this past week.

Opening with the cheerful "Movie Loves a Screen," Ms. Smith makes the listeners clap their hands and sway their hips to a happy beat with a ukulele and trumpet backing her soulful voice. "Terrible Things" creeps in and grooves like a band of dancing skeletons and the spirit of a New Orleans funeral (and I mean that in the most positive way possible), with Smith saying that "she can't help" doing these things that seem to bring pain to others and joy to herself. "Drop Dead Gorgeous" comes off sounding like a vengeful Motown tune that could've fit perfectly with the Little Shop of Horrors musical (perhaps a duet between Audrey & Audrey II).

"Can't Say No" shows off Ms. Smith's vulnerability, and whether that'll help or hurt her chances to finding the right man (or woman, if she swings that way) is yet to be seen; but even when she coos like a dove you can tell that she's ready to pounce like a cheetah. "What'll I Do," I'm sure, will one day be played during wedding receptions, as it is perfect for slow couples dancing. "Colors" brings listeners back to the days of vaudeville and swing, and even sounds like a happy sea shanty waiting to happen. On top of that it's got one a great chorus that you will not be able to get out of your head for days.

Starting off like a James Bond theme song, "Dixie Boy" has April Smith shows off her claws and tears into any woman who even looks at her man in any way. She sings "when it comes to my boy, I will fight like a man" as if her enemy is in sight, and proclaims that she "can be a bitch when it comes" to her stuff like it's nobody's business. (Ladies beware: keep your damn hands off her man, or she'll bite your head off!) "The One That Got Away" has Ms. Smith seemingly not care about the man in her life leave her, as it will be more of a mistake on his part than her's. The electric guitar solo plays like an alley cat sauntering on a broken fence, knowing that it's in danger of falling but not caring in the least bit. It's sly and cool, even at its most defenseless moment.

"Beloved" is Sinking Ship's most ravishing track, with Smith's powerful voice backed with a lovely string section. You can just feel her heart break as she says she'll "gladly settle for your ghost," and whether or not this is a metaphor for an unrequited love or if April lost someone near and dear to her has yet to be determined. Still it's April Smith at her strongest point. She goes 180 with her emotions with "Wow and Flutter," which brings the listeners back to her jaunty self. She sings she'll "have her cake and eat it too," which perfectly fits the motive of Songs For A Sinking Ship. April Smith will dabble with many melodies and different emotional points, and will still manage to make them her own with ease. "Stop Wondering" closes the album, bringing -- or waltzing -- the sinking ship back to safe harbor after its wondrous journey, with a crescendo of carousel-like music and Smith proclaiming that she's "got better things to do." With that final comment Ms. Smith and company leaves the listeners craving for more.

Clocking in at just 34 minutes April Smith and the Great Picture Show's debut manages to already be one of 2010's best albums. Its playful tones mixed with a bit of heartbreak here and there help breathe new life into the realm of pop folk. Now I don't expect them to sell out arenas or stadiums, nor do I think she'll become an overnight sensation. However Ms. Smith and the gang will have no problem whatsoever finding an audience for their music, and Songs For A Sinking Ship is a fantastic album to get her and the rest of the band on the right track to the fame and notoriety they rightfully deserve. A perfect opening chapter for the Great Picture Show? Bitch, please! But it's pretty damn close.