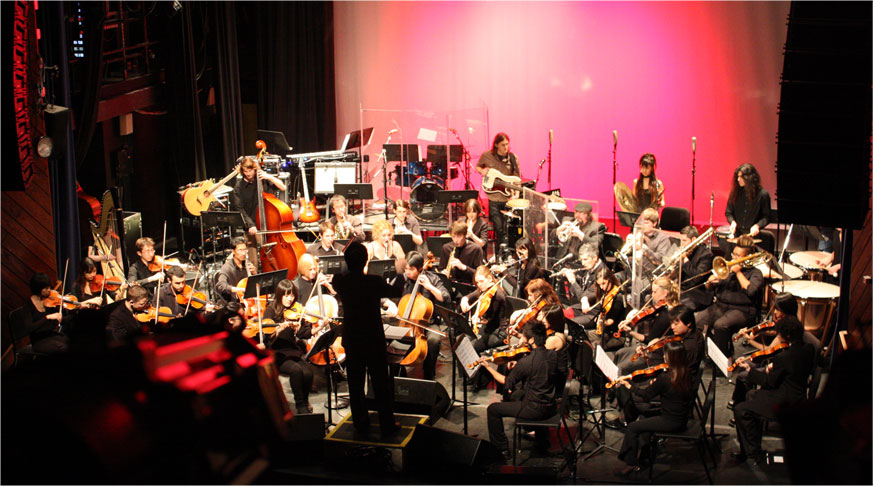 One of the main highlights at this year's Anime Boston came in the form of the Boston-based Video Game Orchestra. Led by conductor Yohei Sato and founder/guitarist Shota Nakama the 100-piece orchestra (with accompanying guitarists, a drummer, a percussionist and an occasional 40-person chorus) led both video game fans and otaku into an amazing journey through every era of video game soundtracks. Keith Lockhart: meet your competition!

Opening the show was a finely-tuned and quite magical interpretation of the Super Mario Galaxy soundtrack. If one were to lose themselves in the music they could swear they were flying high in Galaxy's Comet Observatory. On hand next were selections from the classic Sega game Sonic the Hedgehog 2, which not only did a fine job with keeping with the game's spirit, but managed to bring forth a wondrous arrangement of a score that, in the days of the 16-bit StH2, could not have been dreamed up at the time. "Theme of Laura" from Silent Hill 2 came next, and while one of the guitarists seemed to have missed a cue the VGO managed to cover up the mistake with a Pink Floyd-like essence with a dab of Mono for good measure.

A triple-threat selection from three Mario games (Super Mario Bros., Yoshi's Island and Super Mario World) came next, which blends of New Orleans-like big band and swing arrangements in World & Bros. and a great upbeat tempo for Yoshi's Island (which also included a nice drum solo thrown in for good measure.) "Waterside," the main theme to Blue Dragon, came in nice and calmly, with a beautiful piano solo and fine orchestration from the string section. A smaller ensemble was only needed for the fast paced selections from Chrono Trigger and Chrono Cross (including a quintet version of "Radical Dreamers"), which showcased how much power these few musicians had.

After intermission came a small metal segment featuring Castlevania: Vampire Killer and "Eternity" from Blue Dragon, and while it would've been nice to have heard the rest of the orchestra back the "metal" section the small band of drummer & guitarists showed that they could possibly make a nice post-rock group on the side if they wanted to. With the rest of the players returning the VGO went into music from the classic Myst game. With a large chorus backing them the piece showcased the foreboding and adventurous tone of the classic game. Selections from God of War helped find the perfect sync with the orchestra, choir and metal band. The female vocals in "Snake Eater" from Metal Gear Solid 3 gave the orchestra its big Bond moment, and exhibited the range of styles that the VGO is capable of.

Selections from Kingdom Hearts came next, and included a fine interpretation of Hikaru Utada's "Passion" thrown into the mix. The big ending to the concert could not have been better. Not only did they perform pieces from the fan-favorite Final Fantasy VII, but as soon as "One-Winged Angel" was cued Nobuo Uematsu appeared to a roaring applause. He looked and sounded natural behind the keyboard with the rest of the Video Game Orchestra, and gave the concert the finish it rightfully earned.

After seeing the Video Game Orchestra's performance for the third time (the first being at Anime Boston 2009 and the second at this year's PAX East) it's a wonder how under-appreciated they still are outside of the video gaming and anime community. Sure it might help others to know the material that they are playing from, but this Boston-based orchestra performs in such a way that video game knowledge isn't necessary to enjoy them. Hopefully soon VGO will be playing in more traditional music halls and in front of a more diverse audience. Is Carnegie Hall on the horizon? Hopefully, yes.

Is There a Doctor In The House?

Scare Yourself Stiff with The Taxi...