Start Hitting Yourself, With Photo Dojo

As a fairly recent adaptor of the Nintendo DSi XL, I hadn’t been too impressed with what had been released via their online distribution system, until I got my mitts on Photo Dojo.  The game with the aforementioned name is a fighting game made by Nintendo and is currently being offered for free on the DSi Store.  While it will eventually be going up to 200 DSi points on June 11th, it is worth every penny now and will be worth every penny then. 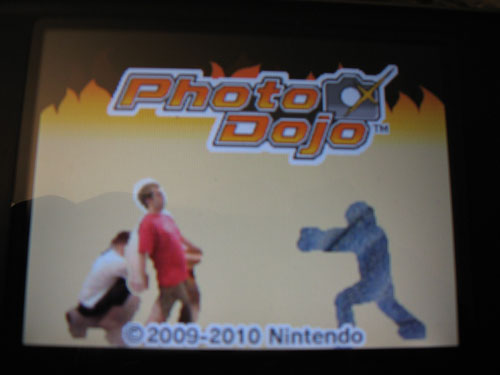 The game starts out with you creating a fighter to do the fighting for you.  Instead of adjusting sliders and picking from presets though, you are tasked with taking pictures to do your creation.  It has you take a series of 12 photos in a bunch of different fighting poses to prepare your fighter.  After your pictures have been taken you get the opportunity to record sound effects as well to even further customize the character.  Even my girlfriend got in on the action and had a great time customizing her own fighter.  To be fair, the pictures are decently hard to take in the right poses and don’t always look fantastic, but the charm in having the pictures not being perfect harkens back to Gameboy Camera and the immense amount of fun I had with that.

Something else I discovered is that the pictures you take don’t necessarily have to be a person.  The limit is your imagination for what kind of characters you can make.  I used my bath towel to make a character, slightly shifting around the creases from picture to picture, and the end result was fantastic.  You even get the opportunity to create the battlegrounds for your battles by taking a picture and having it loop on itself, which works surprisingly well. 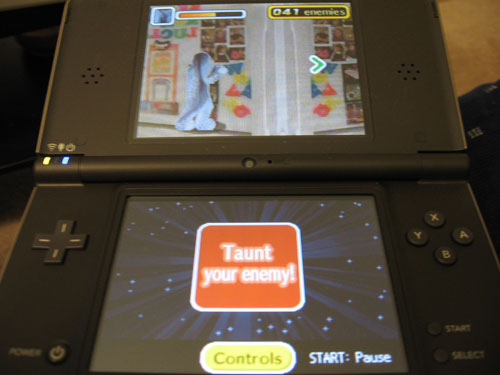 In terms of the gameplay, it is extremely simple, but still fun enough to get you through it.  There are 2 modes to play through, both versus and single player.  In the versus mode, you can have a person grabbing either side of the DSi and controlling the character on your corresponding side.  From there, you just battle it out until someone wins.  In the single player mode, you are tasked with taking out 100 opponents.  This seems fairly easy, but you have to be paying a good amount of attention to make it through the whole course.

This is the kind of thing that could really help the DSi.  While a lot of it is simple and rough-looking it is still lots of fun because of its charm.  I would definitely recommend to anyone that this is worth the download.  Not just because it’s free, but because you’ll have a lot of fun with your time playing it.  Download it now if you have a DSi, there is no reason not to!

The Return of the Revenge of the S...