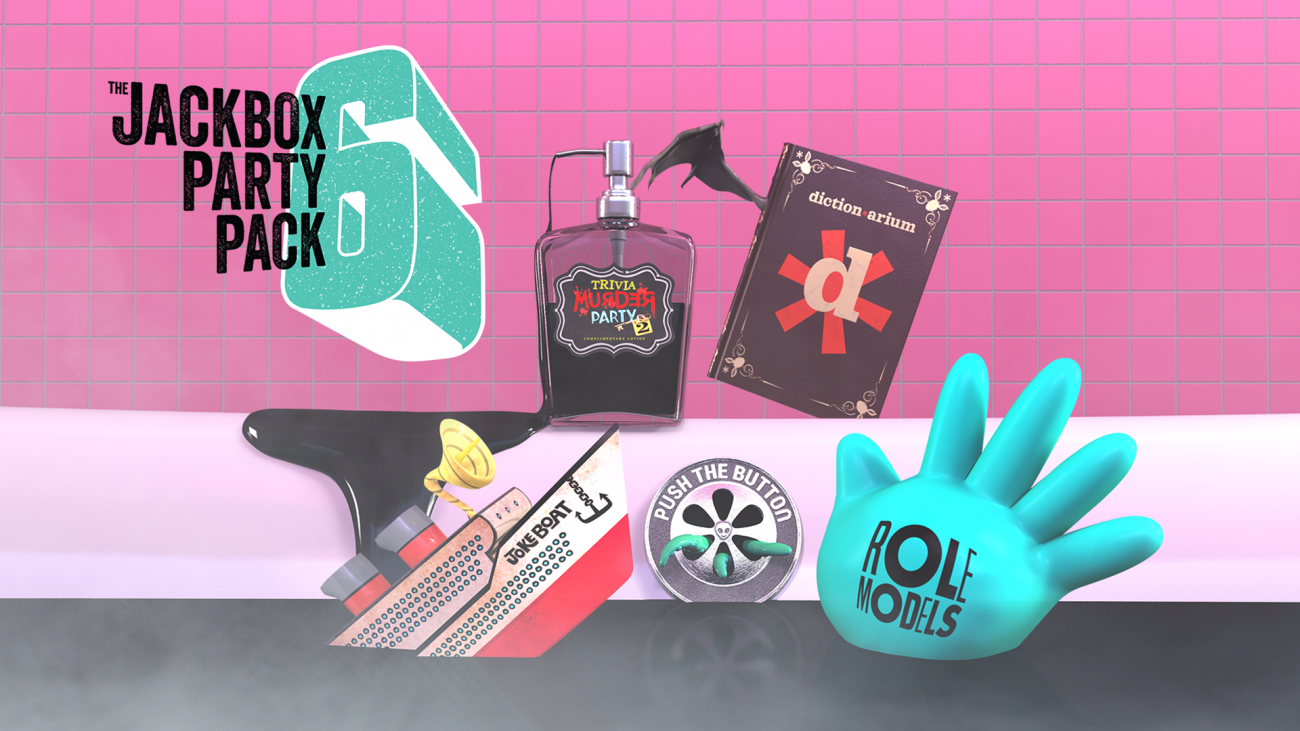 Jackbox Games has been delivering quality party games for over 5 years now and this year has gifted us with The Jackbox Party Pack 6. This pack contains an eclectic series of games that range from joke-telling to discovering hidden roles. Instead of diving into the pack as a whole, let’s visit each of the games in the pack individually. 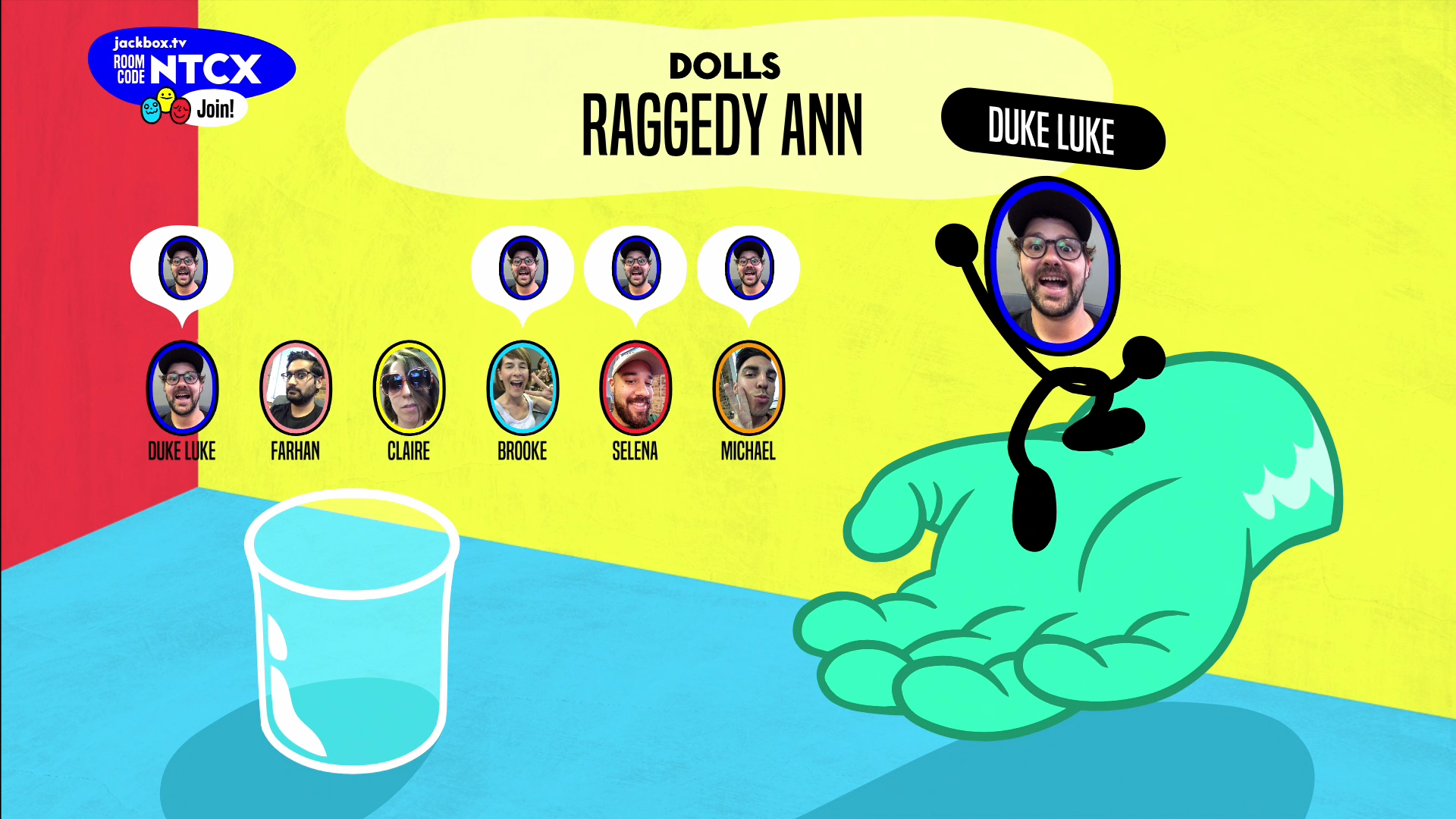 This is one of the most odd games ever released in a party pack. Role Models isn’t exactly off-the-wall wacky, but the group I played it with had a hard time nailing down its intent. Role Models has your group sorting every player into archetypes based on the categories that come up. It then comes up with your true identity based on all of the things you were voted to be throughout the game. One category was different hit 90s movies and they seemed to slot in decently amongst the group. I got voted as Scream, due to my love of horror movies, which makes a lot of sense, but as the categories changed it felt harder and harder to lump people into appropriate archetypes. It usually ended up with the group feeling as though most, if not all, of their votes were arbitrary. A lot of audible “Not really, but here you go I guess” as the game progressed.

On the flip side of that, the awkward and completely wrong deductions of the game did lead to some cringe-y laughs throughout Role Models. This leads me to the confusion about the intent of the game. Did they intend for it to be outlandishly wrong? Is that where the fun of Role Models lies? If that is the case, then it is not as clear as it should be in the intro to the game. Everything else about the game, at least, is easy to understand and fun. If you can get the group to lean into the nonsense, then this is a solid party pack game. I also appreciate that, even though there are points assigned, Role Models is a very low-stakes game that won’t bring out the worst in potentially over-competitive friends. In the end, the points don’t matter and everyone gets their definition in the end, even if it is hilariously wrong. 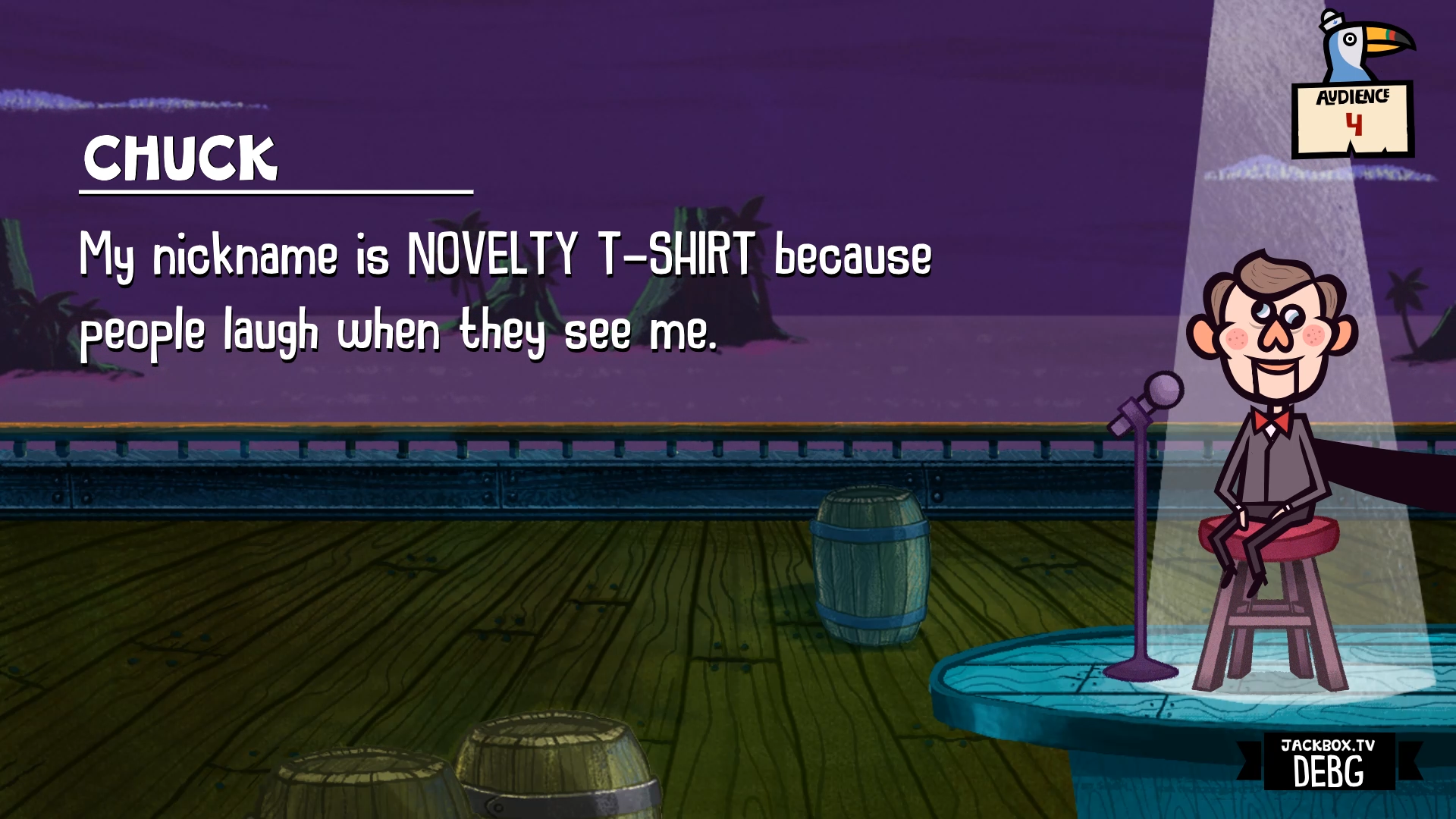 Combining the create-your-own style of games like Tee-KO and Patently Stupid, Joke Boat has players creating jokes that then must be delivered to the rest of the group. First, the entire group writes a bunch of words that will be used as the subjects of the jokes and then the jokes are crafted through a combination of some pre-written setups and punchlines written entirely by the players. Everyone also has a catchphrase that they should, or must if I’m being honest, say after delivering their joke. Joke Boat requires a level of creativity and bravery that pushes the lines of what Jackbox Games have required thus far. It is a balance of pre-made versus freeform creation that doesn’t quite nail its landing. Where a game like Quiplash gives players complete control over their jokes, Joke Boat leaves you at the mercy of the pre-made setups, which can be harder to play off of than expected.

When the jokes hit in Joke Boat, they do still hit hard though and it was a ton of laughs. The catchphrases are hilarious and even saved a few of the jokes that didn’t land. For the shy members of your group, the character on screen can “read” your joke, but that just amounts to Star Fox-style garbled speech while the joke goes on screen. I appreciate where their head was at with Joke Boat, but personally I think the jokes that come out of Quiplash are funnier and creations that come out of Patently Stupid are more fun to present. 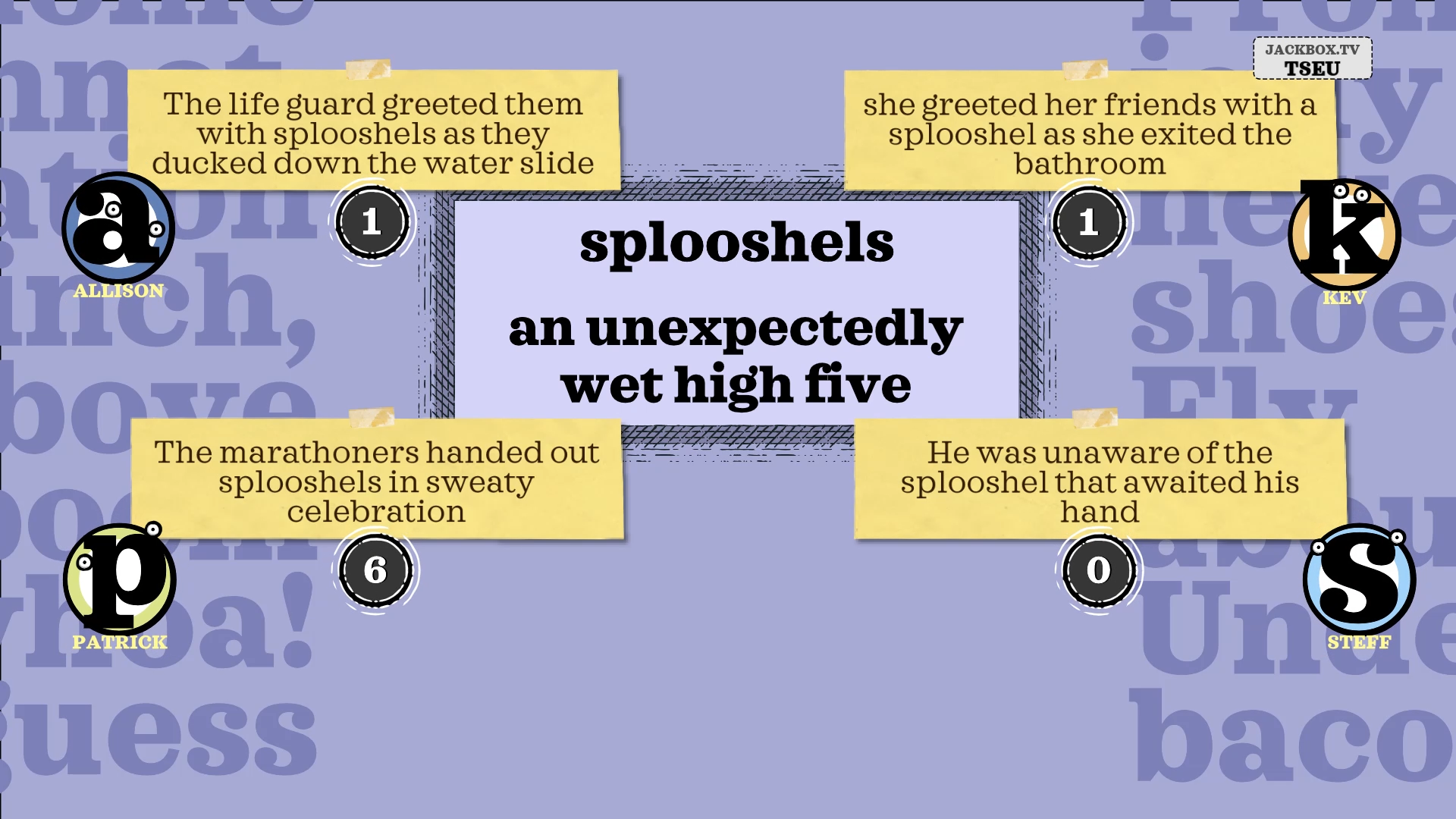 The aspect of Dictionarium that surprised me the most was how quickly the game plays out. Dictionarium tasks players with defining some brand new words, based on an almost random series of letters it puts on the screen. Throughout the game, eventually, the group creates an entire page for their new word, including a definition, origin and the use of it in a sentence. Similar to Role Models, this game is very low-stakes and might be my favorite of the brand new games here. While their is some competition to getting your definitions or sentences chosen, I usually found myself agreeing and laughing along with what the group chose by the end, regardless of whether they were my ideas. Combining this with the fast pace at which it plays makes it a solid party pack entry that I will certainly come back to anytime I boot up Jackbox Party Pack 6. 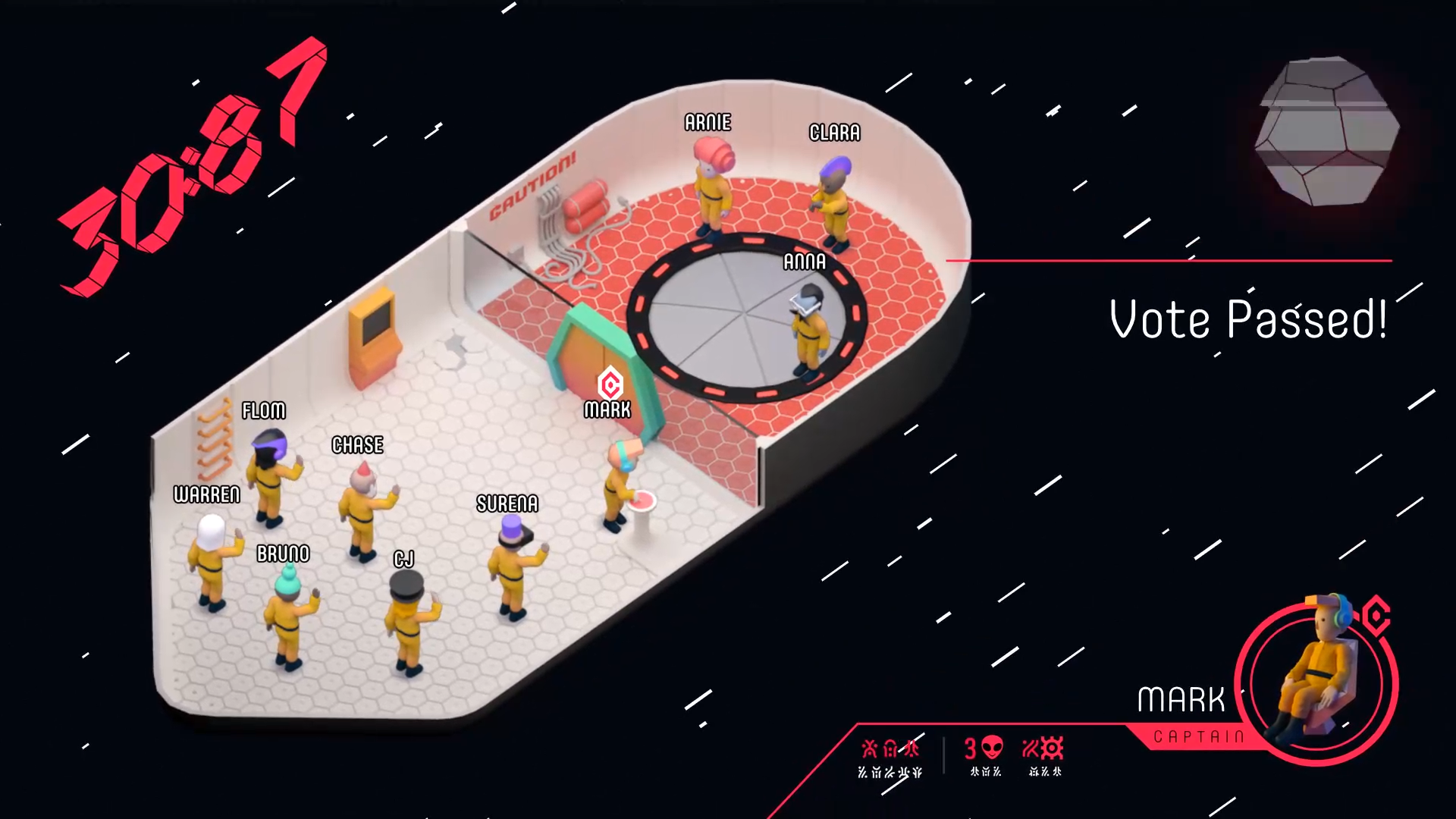 Complication is always the worst enemy of any Jackbox Party Pack game. Push the Button falls into these traps but could be one of the best games in The Jackbox Party Pack 6 after a little practice. Push the Button is a hidden role game that tasks players with discovering who amongst them are secretly aliens. Once the aliens have been discovered, players can “push the button” and send them out of the airlock of the ship. You have a limited time and only one opportunity to to accuse aliens correctly though, so you have to play some mini-games to discover which players are secretly aliens. This mainly entails the game asking players questions, but the alien players receive a slightly different prompt. On its own, this concept would make it way too easy to guess the aliens, but they have added the ability for aliens to hack other players, forcing them to answer the alien prompt.

This was definitely one of those Jackbox Games that’d not hit the first time around, but after a few more games, it gets a lot more fun. Knowing how the game works gives the aliens a bit more of an edge than the faker from Fakin’ It and allows them to last a bit longer and seed a bit more discord. If you’re looking for a bit of light fun, Push the Button is not the game you’re looking for, but it might be the one you come back to most if you enjoy tabletop hidden role games like The Resistance. 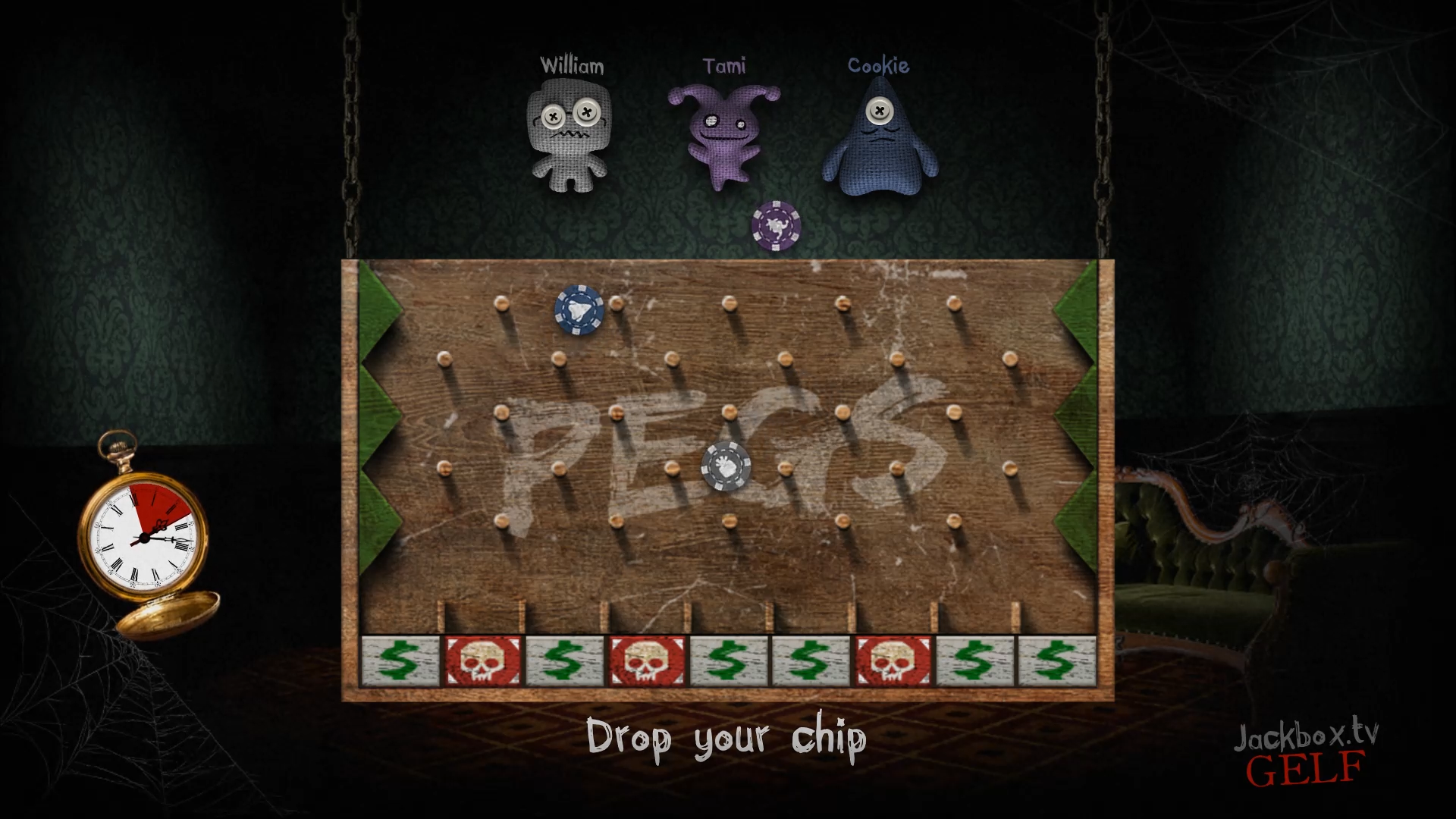 The solitary sequel game from The Jackbox Party Pack 6, Trivia Murder Party 2 takes the concepts it introduced in the original and packs in some new surprises. The setup for the game, involving answering trivia questions and then playing games to save your life if you miss any of the trivia, is the same but has been moved from a house to a hotel. It evokes The Shining in a way that made me smile and they have revamped the original music from the game. All of the new killing floor games, now “killing room,” are really cool and add some fun new concepts like dialing a rotary phone or following specific directions.

Moving a little bit more broadly, I need to talk about glitches, because there were glitches throughout the whole title that need to be addressed. Sometimes there was overlapping text on a phone, others involved nothing being on the screen when there should be, but the most egregious was in Trivia Murder Party 2. There were moments, on one of our players’ iPhone 11, that they could not do anything to participate in one of the killing room games. Touching the phone did nothing and got them killed multiple times. Even with these glitches, Trivia Murder Party 2 is a great choice to come back for a sequel and was a favorite amongst multiple people in my group playing.

The Jackbox Party Pack has been around for quite a while now and while the team over at Jackbox Games is still cranking these packs out every year, the offerings are starting to falter a bit. While I would rank The Jackbox Party Pack 6 fairly low in my overall ranking of the packs, it is still a solid game that would get a lot of play in any party setting. Pop this game on at a party and the whole group is going to have a great time! They can’t keep going back to the hits like Quiplash and Fibbage though, so continuing to innovate is necessary. So, check in at the murder hotel today and pick up The Jackbox Party Pack 6 for PC, PS4, Xbox One, Nintendo Switch, iOS and Android.