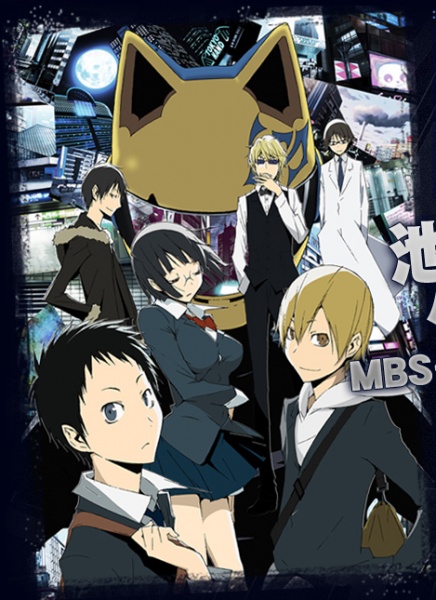 It's been a long time since I watched an anime series that wasn't just good, but a thrill to watch. The vast amounts of moé-laden anime series has just about made me give up on the Japanese TV animation scene. Fortunately a light at the end of the tunnel has appeared, in the form of Durarara!!

Durarara!! follows the exploits of a number of people from the Ikebukuro section of Tokyo. We have Mikado Ryūgamine, a country boy who moves to Tokyo to go to high school with his best friend Masaomi Kida. On his first day he learns of the dos and don'ts of the Ikebukuro, but mostly is educated on who not to screw with. Around the town Mikado meets up with Masaomi's friends, including the Afro-Russian Simon Brezhnev; a man who can lift his own size with one arm. (He's a nice guy, but near the top of the "don't fuck with" list!) Mikado also learns of two things about the town. One is of the Dollars gang, a group of people that the town fears. The other is of the Headless Rider, who is a vigilante of sorts within the Ikebukuro area. These and other folks (including an ass-whooping waiter and the main antagonist Izaya) make up the series' main focal points.

The animation was done by Brain's Base, who was responsible for Baccano! and the second season of Spice & Wolf. The animators had a tough task, considering that Durarara!! is based on a light-novel series rather than a manga, but their staff managed to do an amazing job with capturing the sights and sounds of the Ikebukuro area. To top it off the character designs are alive and vibrant, and their personalities seem to jump off the screen. Of course, we can't forget to talk about the action sequences, which will leave viewers clamoring for more. The scenes involving the Headless Rider alone will make you want to sit down and marathon the series no problem. (It also helps that the voice acting is also well-done, especially from Mamoru Miyamo's Masaomi and Takaya Kuroda's Simon.)

Know this review is short, but trust me on this: Durarara!! is one fun anime to view. If you want further proof go to their Crunchyroll site and try to watch only one episode. You'll probably find yourself watching all the current episodes and enjoying every minute of them.

Just One of the Many Reasons One P...