"The World" Is A Tough Place For Mr. Pilgrim 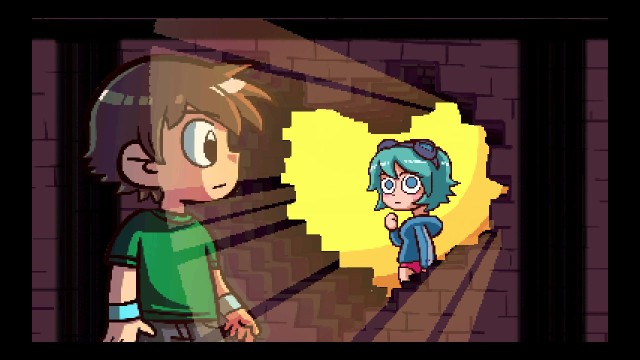 Your thumbs will be sore, you'll be screaming at the TV when the Continue Screen appears, and you'll be thinking for days on a proper strategy on how to defeat the bosses. Is Scott Pilgrim VS The World worth all this anguish? To put it bluntly: hell yes!

Based off the beloved graphic novel series by Brian Lee O'Malley (as well as the recently-released film from Edgar Wright) Scott Pilgrim VS The World follows the classic Canadian love story of our title character and Ramona Flowers. However an evil force is upon the couple, as it is revealed that if they wish to live happily ever after Mr. Pilgrim will have to defeat Ramona's seven evil ex-boyfriends. (Technically it's six ex-boyfriends and one ex-girlfriend, but that seems a bit too long to explain, now doesn't it?) Players will have the chance to play as Scott, Ramona, Stephen Stills (no relation) and Kim Pine as they battle the likes of ninjas, dinosaurs, punk-ass kids and annoying little pipsqueaks with glasses. Sounds easy, right? Ha ha, fat chance!

Scott Pilgrim VS The World is perhaps one of the most frustratingly hard games that I have ever come across to in my lifetime. There are times where you'll be forced to fend off almost fifteen baddies at the same time, which makes it nearly impossible to even get a single strike in on an opponent. Yet as I played I couldn't help but feel like I did when I was younger; inserting quarter after quarter into such classic side-scroller beat-em-ups as Teenage Mutant Ninja Turtles and The Simpsons. It's a tough road to walk on, yes, but it gets your adrenaline pumping in a good way.

As you maneuver throughout the world players can sneak into shops to help regenerate their energy and level up to an extreme epicness that only one dreams of. (Believe me: when you get to Level 14 and unlock a certain maneuver you'll be breathing a huge sigh of relief.) Hidden areas will also bring you to the Subspace Portals, where Scott can skip through some areas of the levels and grab some more coin to buy food and items to continue your journey. You'll have to look really carefully to find these places, as they are sometimes difficult to find. (Once in a while the entrance will stick out like a sore thumb, though.)

Once you reach the end of the level you'll be faced head-on with one of the evil ex-boyfriends, and are these battles tough! Todd Ingram's arm will shoot out in a Tetsuo-like freakish manner, throwing objects at you that you sometimes can't avoid. Roxie Ritcher will attempt a shadow-clone jutsu (no Naruto reference necessary) and attack you from all four sides. Lucas Lee will speed on his skateboard and do everything he can to run you over. Still with the right strategy you can defeat the evil exes (HINT: jumping helps!). However an issue arises when you run out of lives. Once you die and press Continue, you will be forced to start the entire level over again! (Here's an idea Ubisoft: instead of making it more difficult for us to play this game, why don't you subtract a sum amount of the cash that we earned in the level and let us continue on from the exact spot of the level we were on?) Which is why I say it's better to play this first time around with a group of friends. 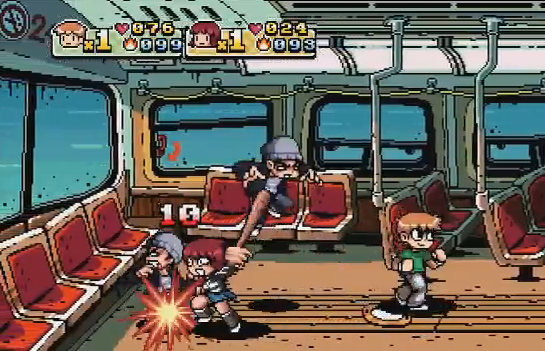 You and three pals can play at the same time, and the key term for gameplay is teamwork. If you and your friends work together to play Scott Pilgrim VS The World you will have no problem beating them. Not only that but it lets players rock out with an ultimate team combo that has all four players, well, rocking out. No, there is no online play, as there shouldn't be. This game was meant to be played with people in the same room as you, as if you and your friends were crammed together in a small arcade booth. You'll laugh, groan and scream together as you embrace the nostalgia that Scott Pilgrim VS The World breathes into you.

Speaking of nostalgia, you can't talk about this game without talking about the 8-bit graphics here. While I imagined the game to be more in the vein of cel-shaded this style certainly fits the gameplay entirely well. It's as if I was playing something off of my NES, only in much-better high-definition. Of course we won't leave out the soundtrack, written and performed by Anamanaguchi. The rock band from New York City wrote 30 tracks for Scott Pilgrim VS The World, each one as hard-rocking as the last. Pray the soundtrack becomes available soon, as it will be on almost every gamer's wishlist.

Playing the game alone may take you days to accomplish, but having the right amount of friends over will make this a quick game to get through (probably a few hours). However the replay value of this title is huge, as you will want to try and unlock all the features. (The Survival Horror mode, where you battle zombies, may be an old cliché by now, but it's still tons of fun.) With all this and more (can't spoil all the secrets, can I?) Scott Pilgrim VS The World is one of the finest, if not difficult, games to add to your collection.

While Scott Pilgrim VS The World may be one of the most difficult games to play (even more difficult than, dare I say, Super Ghouls 'n Ghosts) it's also one of the most fun. Granted your fingers will be sore for days after hours of game play, but to be able to play as your favorite characters from the Scott Pilgrim universe is nothing short of sweet. It may not be the best downloadable title of the year, but it's pretty damn close.