Have You Played VVVVVV?

Browsing on Steam the other day, I was looking to see if I could find something on the cheap that could be fun.  As I was going through I noticed a little game called VVVVVV for only five bucks.  I remembered playing a demo of it a while back and enjoying it, so I picked it up.  I am now officially in love with this game.  While it is a very simply designed 2D platformer of sorts that is, at times, punishingly difficult, if you’re into that kind of thing, it could be just what you’re looking for. 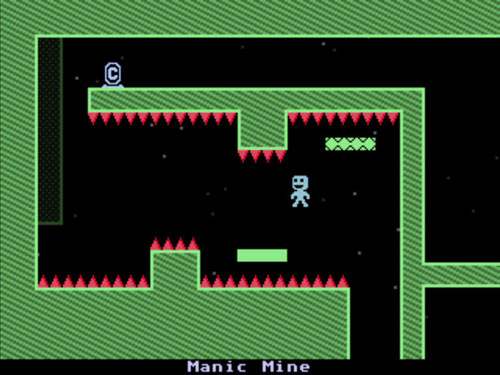 The very first game I ever personally owned was Mega Man 3 for the NES.  Growing up, I’ve loved all of the original Mega Man games, as well as the new couple that have come out the last two years. The thing that sticks out in a lot of players minds about that particular series is the difficulty.  The games were hard, but that just mean’t that conquering them came with a bit of pride and excitement.  Playing VVVVVV, very much reminded me of this feeling as there are some parts where you spend a minute or two wondering if what it wants you to do is actually possible.

VVVVVV is a gravity-based open-world platforming game.  There are only three buttons that you can press: right, left and switch gravity.  The basis for the game is that your spaceship got pulled into some sort of weird dimension and you have to navigate through an abandoned space station searching for your lost crew members.  You use your gravity switching ability and various portals to other areas in the station.  Each room has its own name and is littered with v-shaped spikes.  It also has a death counter that keeps track of how many times you’ve bitten the dust. 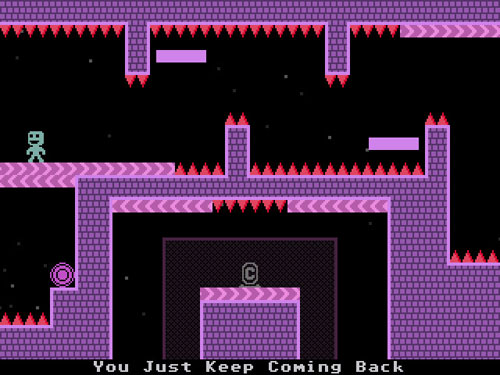 The design of the game is very simplistic with the characters being people shaped colors with smiley and/or frowny faces, depending on the situation.  I love the style that this has as it keeps the game nice and simple so that you can focus on what it’s really about, the challenging gameplay.  Each spiky room is like its own puzzle and sometimes you have to die a couple of times before you can actually comprehend what is required of you to pass through the room.  While dying in any game is frustrating, it hardly ever seems like it’s being unfair in this instance.  You kind of think, yeah I messed that one up, just need to try again.  They also litter the levels with plenty of checkpoints, so you’re rarely starting over more than a few seconds from where you were.

For those of you who really enjoy your chiptunes, it also has a very catchy soundtrack that will keep you entertained while you play.  As you venture through the station there are, as the game calls them, shiny things that you can collect which will open up a library of said music to play while you’re inside your ship.

Never have I enjoyed dying over 600 times in a game as much as I have with VVVVVV.  With a price tag of just five smackers, I heartily recommend this game to anyone who loves punishing old-schoolesque games.  Be warned however, that if you do not like these games that it is highly likely that you may find VVVVVV infuriating as opposed to fun.  I’m going to go ahead and predict that if they make a sequel, it will have to be called WWWWWW.  I’m just not sure that UUUUUU would work quite as well.

It's time to go Berserk!