With everything from previews to novels, if you want your Dead Space updates, you can find them right here.  Speaking of, I got a chance to play Dead Space: Ignition last week and I’m here to fill you in on how and why you should get it. 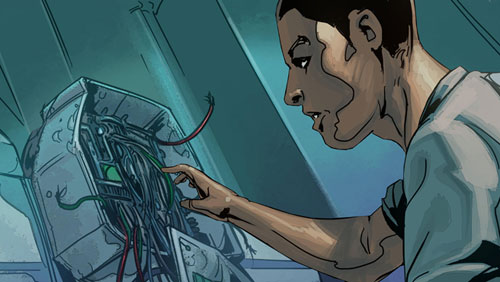 Do you remember the motion comics that EA released in 2008 when Dead Space was about to be released?  Basically, Dead Space: Ignition is the same style of motion comic action, but they’ve put some mini-games in-between the scenes.  I was a huge fan of the original comic and loved waiting each week to see what was going to happen next.  Having consumed quite a bit of Dead Space themed media, I can tell you that the setting and mood are dead on.  Dark and gloomy space station with a terrible pest problem from an unknown source is the place they take you to, which isn’t too unfamiliar if you’ve played, watched or read anything else from the series.  I won’t go too much further into the story, so I don’t ruin it for any of you, but it chronicles the events leading up to the beginning of Dead Space 2.  There are multiple endings, which is more than enough reason to come back for a second go around.  It also gives you the ability to skip the cutscenes if you just want to get to the ones you haven’t seen yet, which is a highly appreciated feature for those additional play-throughs. 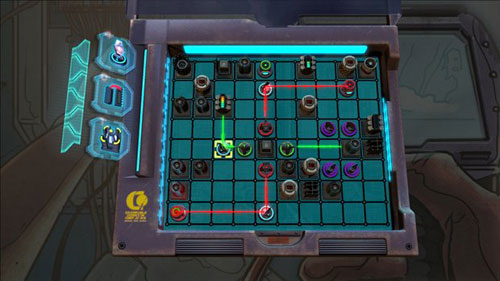 The mini-games, though not at all related to the gameplay in the main games, are enjoyable.  There are three game types for these portions: a twitched-based line racing game, a tower offense game and a beam-directing puzzle game.  As you progress through the story you gain extra abilities and time as the games get more and more difficult.  Personally, my favorite game was the tower offense game where you’re trying to hack into someone’s system.  You do this by sending in viruses which get attacked by the system and the goal is to get a certain amount of these viruses past all the defenses.  The line racing game involves getting your line to the finish before all the opponent lines.  The computer can knock you off the trail, slow you down and there are obstacles in your way.  The beam directing puzzle game is just about how it sounds.  The goal is to direct the beams to a particular side of a receiver while matching the color of the beam.

The whole affair is not too terribly long, maybe an hour or two depending on retries, but the story is entertaining and the games are fun.  I highly recommend picking it up, but before you rush onto the PSN or XBLA to pay 10 bucks for it, here is the way you should do it.  If you reserve it at participating retailers, I did mine at Gamestop, they will give you a code to download it for free.  This definitely makes it worth it, especially if you were going to pick up the game anyway.  So, go out there and get it!  Hard to argue with free.

Happy Halloween From The Land Of E...