"Magic" In Full Abundance With The50Kaitenz Around 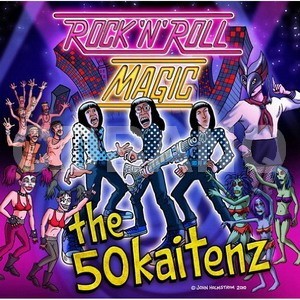 When it comes to The50Kaitenz their mixture of punk rock and comedy is no match for any band, so when it first heard that the Osaka trio was teaming up with cult favorite director Noboru Iguchi (The Machine Girl, Robogeisha) the pairing sounded like a match made in Heaven. Like a blend of The Three Stooges, Help! and Detroit Metal City both the director and its stars manage to create one heck of a funny blend of comedy and punk rock with Rock 'N' Roll Magic.

For some reason unknown Danny, Dory and Bogie are thrown into jail, and after trying to unsuccessfully escape a magical demon helps them out and makes them stars in America. The fame is short-lived, as they are transported into worlds with the yakuza and zombie ladies. Danny dies, but is brought back to life by Japanese hippies. The50Kaitenz then set out to save their fans from the demon lady and her band, who try to brainwash and zombify them with their awful music. (This is what I got out of the film, as it was in Japanese WITHOUT subtitles, but I think I got the majority of the story right.)

Clocking in at just under 30 minutes the movie showcases the sort of physical humor one would see in a 50Kaitenz movie. On the other hand for a Iguchi film it's not quite what I was picturing it would be. Noboru is known for making films that are so gory that it's hilarious, and unfortunately there's no real gore to be found in Rock 'N' Roll Magic. The humor is intact, and the crazy weapons are there. (Danny's machine gun guitar made me drool with excitement, and was the coolest musical weapon I've seen since Guitar Wolf pulled a samurai sword out of his axe in Wild Zero.) Sadly it's the gallons of blood, guts and severed body parts that make Iguchi's films truly memorable, and there are none to be found here.

Despite that The50Kaitenz know how to make an entertaining film just with their punk music and silly antics alone. Songs like "I can not be a good boy" and "S.O.S!" showcase why Danny, Dory and Bogie are so loved in their country. They have a fine nod to classic rockabilly in their sound, while at the same time feature drops of Ramones, Sex Pistols and even a bit of Beatles in their riffs and melodies. "Ikenai Beat," which plays during the yakuza scene, is the best song that The Blue Hearts never wrote, with Danny even sounding Hiroto Komoto in some places. Dory gets a song in with "Thunder Boy," proving that if he were to ever front a side-project he would be one badass frontman. It's the title track that showcases the true power of The50Kaitenz, thanks to its catchy chants and wavy guitar twangs. (Pray another U.S. tour happens soon, as they are fantastic to watch onstage.) In short while the movie may disappoint in a couple places its humor and music still make it a must-watch film; just make sure you have an interpreter or someone fluent enough in Japanese to tell you exactly what's going on.

Pre-Game of the Year: Part 4