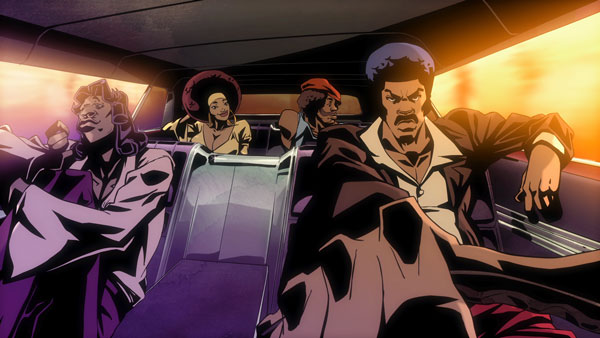 Premiering on the Adult Swim website the eleven-minute episode follows his royal badassness as he undertakes a mission to stop That Frog Kurtis, the beloved host of the children's program The Puppet Show, from pulling a massive crime spree composed of his puppet pals and kid fanbase. Developed by Titmouse, Inc. (the same guys who do Metalocalypse and Superjail) the animation style adds more nods to Japanese anime than the Electric Factory-inspired cartoon cut-scenes from the original film. While the style looks great -- especially in the fight sequences -- it tends to lose some of that 70s luster the original film had.

Everything else about the Black Dynamite cartoon, on the other hand, does just about everything right to keep with the spirit of the movie. Having Michael Jai White voice the classic title character -- as well as Tommy Davidson (Cream Corn), Kym Whitely (Honeybee) and Byron Minns (Bullhorn) returning to voice their characters -- was the right move, and the humor and dialogue fits perfectly with the situation on hand. There's something both hilarious and kick-ass about seeing a bunch of mack daddies beating the bejesus out of some puppets, and the Muppet parody aspect of the episode had me rolling on the floor with laughter. (Kudos should also be given to Kurtis's voice actor J. B. Smoove, a very underrated actor who almost always steals Larry David's spotlight on Curb Your Enthusiasm.)

As a eleven-minute pilot the Black Dynamite cartoon looks standout, but the true test of the shows longevity will come in 2012 when the half-hour series makes its debut. For now, though, this Dynamite is looking to be a blast-and-a-half!