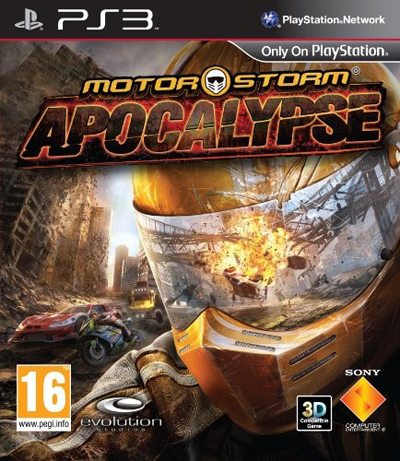 Last year's Split/Second was one of the most exciting racing games to come out in years, so it's no surprise that many developers would want to imitate the insanity that Black Rock Studios brought to the racer. Who would've guessed, however, that the MotorStorm series would be one of those to rip a page out of their books? Here we are, then, with MotorStorm: Apocalypse, a racing title that knows how to make players sit on the edge of their seats.

For Apocalypse Evolution Studios added more styles of cars into the fold, including choppers, superbikes and muscle cars. Gone are the natural environments, replaced with a giant city that has been riddled with natural disasters and explosions. Also found is a story mode, split into three difficulties (Rookie, Pro, Veteran) that each follow a different racer. Playing through each of these three storylines will also show off different parts of the disasters that happen during the two-day festival. 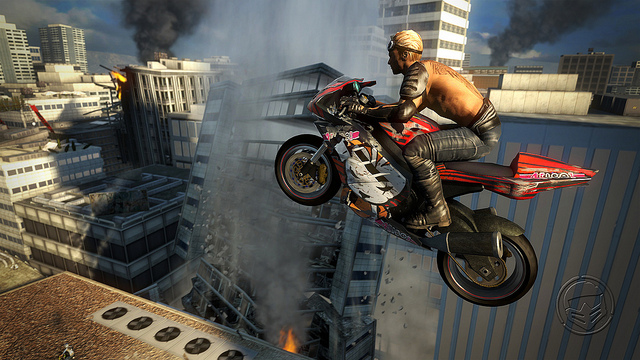 During the story modes you are given one specific vehicle to use in each chapter. While it gives players a chance to go hands-on with every car, truck and bike available I couldn't help but think that it would've been better to be able to pick-and-choose which ones you wanted to drive throughout the storyline. I had issue trying to steer some of the bikes at higher speeds, and turning proved to be quite difficult when you were using a big rig or mudplugger. It took me a long time to get used to handling the bigger and smaller vehicles, whereas the ATVs and muscle cars were more of a cinch to drive.

While story modes in racer titles tend to be hit-or-miss MotorStorm: Apocalypse manages to be quite intriguing. Using Flash-styled animation players learn about their characters' back stories and what had brought them to the big city. We are also introduced to some of the background characters, many of which help make your characters who they are. While the animation style is a tad choppy it doesn't do anything to diminish the well-written story. In order to move onto the next race you must finish in a position between fifth (Rookie) and first (Veteran), and that's where the real challenges begin. 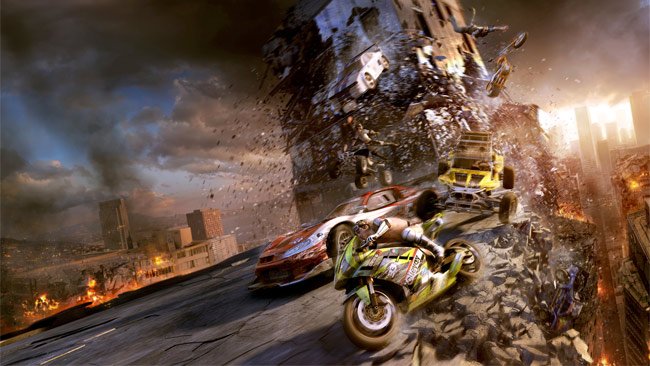 Unpredictability is the name of the game when it comes to the races themselves. Many times while you race the track directions drastically change via natural disaster. One lap you could be doing a simple run-around, when all of a sudden the start of the second lap has a building falling in front of you, creating an opening filled with jumps and other massive explosions that will either help or hinder your performance. Unlike Split/Second these disasters cannot be triggered by other racers; instead it's Mother Nature that is out to screw you out of a victory. I cannot remember how many times I had to restart a race because I got wrecked by a collapsing building or falling debris. Even if you time yourself right while the world crumbles around you, there still is a strong possibility of losing the race in a blink of an eye.

What makes MotorStorm: Apocalypse stand out is its overall look. With its nitty-grittiness full intact the game looks as gorgeous as it does anarchic. The worlds you race in are dark, grim and filled with much debris from the disaster, each place looking to (and probably will) fall apart at any given moment. Your vehicles also dazzle throughout the games, with each bump and jump appearing on your car or bike as it goes through the wears and tears of the races. The only downside is the look of the characters, especially on the ATV and superbike. They just seem to not be as realistic as the cars they are driving. Props must also be given to Klaus Badelt's soundtrack, which has been remixed with style by the likes of DJ Shadow, Noisia and Elite Force. 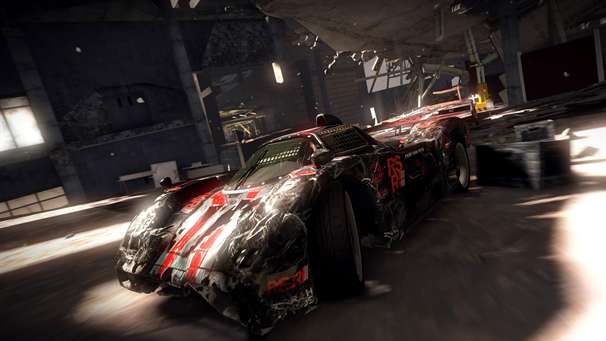 MotorStorm: Apocalypse contains various racing modes that will keep players coming back for more, not to mention the vast amounts of online and split-screen multiplayer fun you will find. By winning races (or coming in at a certain ranking) players will also be able to upgrade your rides in order to make them more used to the surroundings you're racing in. The story modes will probably take you roughly twelve hours to beat, depending on how good you are with the more tougher difficulty challenges, whereas the multiplayer modes will have you coming back again and again until the next MotorStorm game is released.

The MotorStorm series has been known to excite its gamers and keep them at the edge of their seats, and Apocalypse is no exception. From its over-the-top insanity to its face-paced racing techniques Evolution Studios continues on with its streak of heart-pumping moments in the racing realm. With it looking like a Split/Second sequel will never come to pass MotorStorm: Apocalypse has no trouble carrying that thrill ride torch and speeding away with it.