Massively multiplayer online guru Blizzard has another expansion coming out for World of Warcraft. While the main new feature of the game, the new Pandaren race and continent, looks pretty fresh and exciting, I’m here today to talk about a different part of this package. Blizzard is certainly not shy about including homage here and there to other games, the new pet battle system takes it to the next level. Being a big fan of the Pokémon franchise, and always hoped for an online version of the series, they’ve certainly gotten my attention. 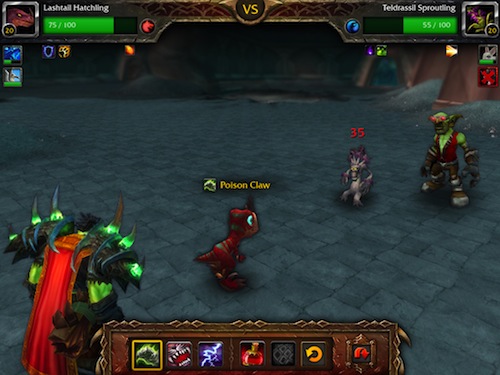 Ever since I started playing World of Warcraft I always collected the vanity pets, especially the rare ones, but never quite knew why. Enter the pet battle system included with Mists of Pandaria. With this new system in place, you can not only collect these pets, but enter into turn-based battles with them. Blizzard, never over-simplifying anything, has made sure the specifics of this system make for a complete, if not eerily familiar, experience.

Obtaining these battling vanity pets seems pretty easy. Any pets you already own are ready to go into battle and you can still earn them by completing quests or purchasing them. You can also craft a party of your pets, up to three at any time, and walk around with them. If you are walking in the wild, you can also encounter new pets in the wild. I know what you’re going to ask, but capturing them does not involve throwing a ball at them. All you have to do is defeat them with one of your equipped pets in battle and they’re yours to keep.

The pets, as you battle with your friends, will level up and gain new battle abilities. Your creature gets three individual slots for their abilities. There are also NPC characters littered throughout the world that can teach new attacks to your pets, but sometimes you have to have a pet battle with them first. They’re also introducing a queue system for your brawling pets, so you can get matched and battle quickly.

So, to sum up, you can travel around the world, training and leveling up your creature by battling other trainers and capturing wild creatures. Aside from a lack of creature evolution, that’s more than just a passing resemblance to Pokémon. To be honest, I’m actually pretty excited to see how well this gets pulled off. Blizzard never ceases to surprise me with the new layers they can add to a seven-year-old game and make it seem fresh and new. Bear in mind that this is simply one feature being added to the already robust list of features for the new expansion.

Out of Her Mind and Straight to Yo...