HomeEventsE3Drop Your Base on a Mech in the Starhawk Beta
by: Hamsterman2049
0
E3 / Video Games

Drop Your Base on a Mech in the Starhawk Beta

Last year, at E3, I got a few precious minutes to get my hands on a lovely online multiplayer title called Starhawk.  Last week, the private beta went public and let everyone with a Playstation Plus account join in on the action.  Being a huge fan of its predecessor, Warhawk, I’ve been excited to see how this game measures up.  I’m happy to report that it’s looking quite good and plays even better. 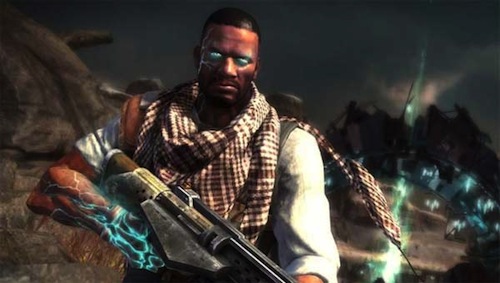 My personal favorite part of the original game was the ground combat.  Don’t get me wrong, it was a ton of fun to blast around inside of the warhawks and hover inside of enemy territory blasting missiles in their face, but there’s just something even more fun about being a tiny little person taking one of those giant jets down.  That same feeling is still quite prevalent in Starhawk, but replace the jet with a giant mech that can transform into a futuristic “Hawk” and you’ve got yourself one hell of a party.

The biggest new addition to the series is the build and battle system that they’ve implemented.  Either if you are killing enemy troops or staying near your base, you are constantly building up resources to create various fortifications for your team.  Each building requires an amount of rift energy that you gather as you either hang back at the base or kill enemy troops/buildings.  A good strategy, from what I’ve gathered thus far, is to get as many of the main buildings up at once and then add defensive ones afterwards.  The main buildings include stuff like the Hawk Hangar, Bunker and Razorback Garage which gives you access to vehicles and weapons.  Beyond that, other additions like sniper towers, walls and even an energy shield can be placed.  One of my personal favorite things about this system is that these things actually drop from the sky, so if there’s an enemy in your territory, you can take them out Wizard of Oz style.  It also adds a great new level of depth, especially when playing capture the flag.  If a team fortifies their defenses just right, it can be quite difficult to infiltrate their base.

The ground combat, though very similar to Warhawk, has been nicely polished.  I know it sounds a bit silly to be excited about, but you can now run.  The aiming system has also been improved by allowing you to lock onto targets without having to hold down the fire button.  The one-hit-kill knife system is still there, but they’ve made it feel a bit more sluggish, which I like because it makes it a little more difficult to get a kill and will hopefully help against people running around and spamming their knife.  Running someone down in the Razorback still feels great and they’ve done a great job of tightening those controls up since the last game.  When you die, you get the map option to respawn and it gives you a selectable green area based on what part of the map your team occupies.  The fun part is that you drop down in a pod which you can control on the way down so if an enemy is in your territory, you can take them out as you respawn.

The Hawk controls are fast and furious.  One second, you can be a lumbering mech looking down on the ants you blow away with rockets and if an immediate threat is posed, you can be a speedy jet in a split second.  The hovering mechanics have been removed and I can certainly see why, you can accomplish exactly what you need to as a mech the same way you could hovering in Warhawk.  The main difference is you can’t be locked-onto while in the mech form and while you’re significantly slower in that form, if you pull it off well, you can shapeshift in and out before they even knew what blasted their face off.

Keeping in mind that this is still a beta and subject to change at any moment, I am extremely pumped about this game.  I can’t wait to see what else this game has in store when it launches into retail on May 8th of this year.  If you have a Playstation Plus account, you need to go check this one out.

How to build a computer Bonus Roun...