Biohazard on a Boat

Capcom is one of those developers that tends to find a series that works and run with it.  Resident Evil is a series that shows this concept quite well.  Don’t let the six in the title of the upcoming PS3/360 title fool you, this series has more spinoffs and re-releases than a 1970s sitcom.  The latest entry in the series, Resident Evil: Revelations, hit the 3DS in February boasting amazing graphics and Circle Pad Pro support.  Does this latest game live up to the high standards set by the series, or does it misspell its way into insignificancy? 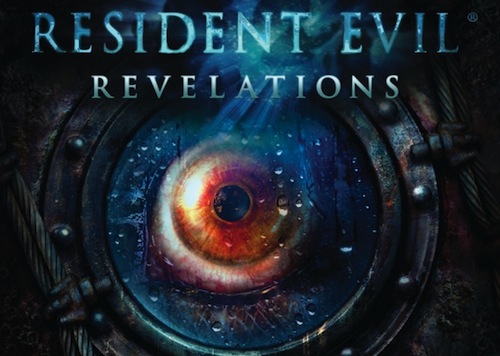 This entry in the zombie-filled series takes us aboard the Queen Zenobia, a luxury cruise ship filled with a new breed of zombie-esque monsters.  A terrorist group called Veltro has released a new version of the T-Virus and it’s up to Jill Valentine and her partner Parker to uncover the mysteries of the ship.  The story, in true Resident Evil fashion, is filled with twists, turns and even a few double crosses.  As well, every time you boot up the game, it recaps the story with a fun “last time on Resident Evil” segment.  As a person who tends to put a game down and not play it for a few days, I really enjoyed this feature.  It’s a bit cheesy, but it’s skippable if you don’t want to see it, even if you’ve never watched it.  There are also a healthy amount of beautiful cutscenes in the game, which keeps the story flowing.

If you’ve seen screens or videos of this game, it’s pretty easy to tell that this is one of the best-looking games available for the console.  One of my biggest concerns, since the main game takes place on a cruise ship, was that the environments were going to get repetitive quickly.  To combat this possibility, the perspective of the player changes constantly and there are many location changes and flashbacks.  This gives an opportunity for a wide variety of environments and character designs that have an amazing amount of depth and really push the 3DS hardware.  Load times are quite manageable and happen infrequently enough to not be very much of a hindrance.

When you’re traveling to a new area of the ship, it does a trick very similar to one Dead Space uses quite a bit.  There is a door with a giant wheel attached to it, once the door is activated, it turns while the new environment is loaded.  This is only time I noticed major lag during the game.  The only other thing that bummed me out just a little bit is that while the characters are talking during gameplay, there is no mouth movement.  To be honest, this really is nitpicking, but I did find myself noticing from time to time. 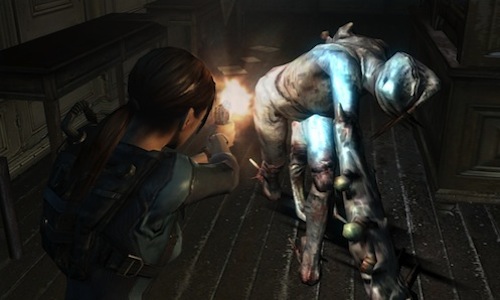 The game controls like the previous two main entries of the series with a camera behind the character’s shoulder.  The way that you aim greatly depends on whether you are using the Circle Pad Pro accessory.  If you have it attached, the controls feel exactly like  they do with any other gamepad.  If not, when you aim your gun the camera snaps to a first person perspective.  The major advantage to the Circle Pad Pro is with that second stick, you can move while you shoot.  If your next question involves why that’s a big deal at all, this is a feature absent from the last major console title Resident Evil 5.

The story is a solid 8-9 hours long, which feels nice and lengthy without overstaying its welcome.  A new game plus option lets you bring your weapons back into harder modes of the game.  The thing that has kept me coming back long after I’ve beaten the game is  Raid Mode.  This mode can be played either on ones own or cooperatively both online or locally.  In Raid Mode, you travel through environments from the main story and kill enemies.  As you go you can level up your character, earn new weapons and costumes.  Another twist is that each enemy displays a health bar and you can see the damage you do to enemies happening as you land hits.  The progression makes it easy to play “just one more map” so you can try to level up again to use that new weapon you just earned.

To be honest, there have been very few games for the 3DS that I have played thus far that really push the system.  Resident Evil: Revelations does a fantastic job of pushing it forward in every direction.  With the Circle Pad Pro support, it simultaneously proves that the accessory works quite well, but is not completely necessary.  The graphics are easily the best on the system and make for a very immersive experience.  If you are a fan of the Resident Evil series and you own a 3DS, there is no reason you shouldn’t pick this game up.

Who the Heck Are Tokyo Jihen?

The Mecha of Eureka Seven AO