After picking up my brand new Playstation Vita, I inserted the fingernail-sized card that housed my copy of Uncharted: Golden Abyss.  Having heard rumblings of a particular downloadable title being quite good, I logged onto the Playstation Network to check it out.  Priced at only eight dollars, I figured it was worth a try, so I downloaded it.  This brings us to today, where I’m only a few chapters into Uncharted: Golden Abyss, but I’ve gotten more than my eight dollars worth out of Tales from Space: Mutant Blobs Attack. 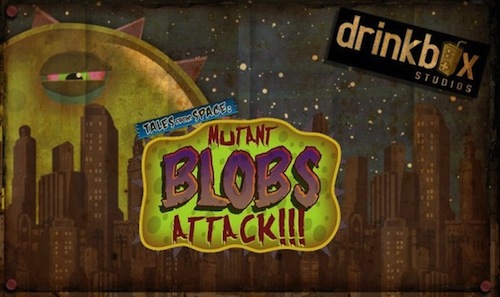 The story follows a mutant blob that, after being held in a science lab and experimented on, breaks out and decides to eat everything in its path.  The story, while not the main draw for the game, is well crafted with cut cut scenes bookending each set of levels.  The Vita’s OLED screen compliments the graphics of the game quite well, making it look almost like you’re looking at the images printed on a comic book sitting right in front of you.  The designs of each level are varied enough to keep everything looking interesting and if you pay close attention, you’ll find hilarious nods here and there.  One in particular is a section where you must launch the blob at a structure made of wood with a green pig inside of it.

The biggest thing that’s kept me coming back for more is simply that the game is downright fun.  The gameplay is best described as a platformer with several puzzle elements.  As you progress through the levels, you must use the blob’s many special abilities to successfully navigate the dangers found in your path.  At the same time, in a move that made me think of the Katamari series, you must absorb objects found in your path to grow bigger and bigger.  As you become larger, new paths open as you become massive enough to absorb the giant cork leading to the next area.

It would have been extremely easy for this game to rely on gimmicky new features of the Vita for its gameplay.  Instead, Mutant Blobs Attack keeps the main elements of the gameplay simple and then builds from there by adding some special abilities.  For example, the blob has the ability to magnetically attract to or push away from metal pipes and came telepathically move some things with its mind.  These special abilities add a great amount of depth to the gameplay and are used just enough to not make them seem tacked on.  There are also a few levels where you tilt the Vita to make the blob roll in an overhead view.  There are also gold medals and blob friends to collect in each level to keep you coming back.

If you own a Playstation Vita and you’re looking for a fun game that doesn’t demolish your wallet, Tales from Space: Mutant Blobs Attack accomplishes both of these tasks in spades.  If you own that system, this game belongs on it, simple as that.  Need more proof?  Hit up the DrinkBox Studios website for a trailer of the game and then pick it up on the Playstation Store!