The Dead Walk, the Living Play

Zombies and video games tend to go together like peanut butter and jelly.  With most games involving the living dead, you spend a great deal of time mowing as many of the ghouls down as possible, until Telltale steps into the scene with The Walking Dead.  Based on the popular comic book and TV series, The Walking Dead focuses more on the drama and reality of what a zombie apocalypse might mean and Telltale’s new episodic game looks to be a great addition to the universe. 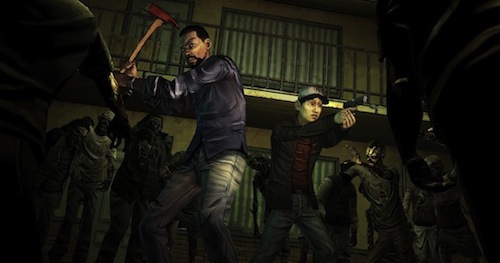 The trap that video game movies and movie video games tend to fall into is that they try to retell the story that’s already been told.  The problem ends up being that story was never meant to be told that way.  What happens then is the fans are upset that it isn’t exactly the same and the new folks don’t like it because of the compromises made to appease the fans.  The best way to handle this situation is, instead of trying to retell the old story, tell a brand new one in the same universe.  Thankfully, this is precisely what Telltale has done.

The game focuses around Lee Everett who, while on his way to prison, is suddenly thrust into the chaos of the undead attack.  The one character they included from the main series, Glenn, feels natural as a part of this tale.  Since much of the game involves experiencing the story, I won’t go any further into details about it.  The part of the game I enjoyed the most is, while there is certainly plenty of zombie killing, there are decently large chunks that deal with the drama and difficult decisions involved in a zombie apocalypse.  There are several screaming matches with other survivors where you have to very quickly take sides and your decision will effect how the story plays out.  You’re also tasked with choosing who lives or dies a number of times which, in the heat of the moment, can be a very difficult choice.

The game plays very similarly to the other adventure games in their arsenal.  You can walk around in the environment, pick up items and chat with folks.  There are also several action scenes where you have to figure out how to save yourself very quickly or you’ll get chomped on by a corpse.  If you do end up dying, the game is very forgiving and starts you back at the beginning of that action sequence.  These portions are thrilling and really help to suck you into what’s going on in the story.  The complete immersion was my favorite part of this game as I often found myself sitting on the edge of my chair, mouth wide open, fighting the urge to stand up as I play.

If you’re looking for a mentally taxing, puzzle solving, item combining game, you’re not going to find it here.  The formula is very close to that of the Back to the Future game they released last year.  There is no item combination, at least in the first episode, and the rest of the game mainly involves using the proper item in the right situation.  If you’re a fan of zombies, or The Walking Dead specifically, you won’t notice because you’ll be sucked into the world.  The moody atmosphere is a perfect match for the series and the cell-shaded graphics give it a nice comic book feel.  For those trophy/achievement fiends out there, you may want to give this game a look, because all you need to do for a perfect score is beat the game.  The trophy part of me likes this because it’s an easy platinum and the gamer part of me likes it because it means I can play the game however I want and still get all the glory.

A fine line has to be walked whenever an IP like The Walking Dead is transitioned to a video game.  The process can often be rocky, but when handled properly, you get a fantastic experience.  Telltale has done a great job of walking that line and The Walking Dead game is off to a nice start.  Whether you’re a fan of the series or just zombies in general, I highly recommend checking this title out.  Just make sure not to turn your back to a fence or a boarded up window, unless you want to be lunch for the living dead.

Tags
Back to the FutureESHHamsterman2049TelltaleThe Walking DeadVideo Games
Previous Article

Those Foul-mouthed and Dangerous A...