2012's Hotline Miami was a fantastic throwback to the '80s, from its Video Nasty-inspired storytelling and NES-era difficulty to its neon-colored worlds and heart-pounding soundtrack. Initially Dennaton Games wanted to expand its story with some DLC, but like a cocky killer-for-hire the concept became too big for its limitations. So instead we are given a full-blown sequel with Hotline Miami 2: Wrong Number, a psychotic ride through the darkest depths of the human subconscious.

Wrong Number features thirteen playable characters whose stories are intertwined thanks to the appearance of Richard, one of Jacket's previous mask personas. An actor shooting a film based on the first game's scenarios dives too deep into his role; a group of friends emulate Jacket's sprees with their own thirst for bloody notoriety; and a detective whose criminal-catching tactics are far more Dirty Harry-like than by the book. As the nights go by and the corpse count piles up, one can only wonder if the city of Miami may find itself drowning in blood. 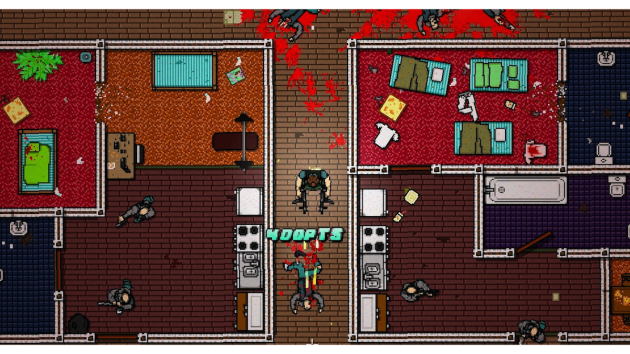 As it was in the first game the object of each level is to kill off every person on each floor, up until your character is the only one left standing. Sometimes you start off with a weapon like a gun or knife, other times you'll need to bareknuckle someone to steal a tool for death. In some cases, depending on who you play, you may be given a power-up like the ability to roll under gunfire or deadly fists that kill with one left hook. While the urge to jump on in and reign bullets and violence sounds good, doing so may cause instant death. (This is a one-shot kill sort of game, after all.) Die, and you'll have to start from the beginning of the floor you're currently on.

Wrong Number can be pretty unforgiving at almost every corner thanks to its difficulty. On many occasions you may find yourself stuck on certain levels for hours on end. (In one instance during my experience it took me nearly two hours to complete one of the Detective levels.) The game is a lot smarter than it may look, as every time you die adds another key to strategizing a level completion. Before you jump into the carnage you can have a quick look-around to see who's close by, which can help you figure out how you should take them out. 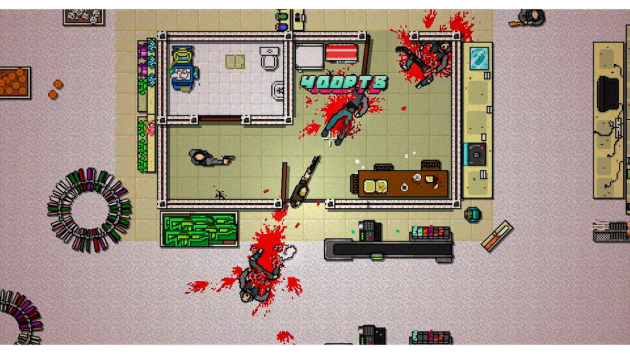 This is one sort of title where you'll need to be quick on your feet, along with be in arm's reach of the next weapon to grab in case you run out of ammo. During one level I found myself with only one bullet left in my gun. Initially I would fire a shot to gain the attention of the nearby enemies, thereby bringing them to me and having them fall to my firepower. However I decided to peer into the room where three enemies with guns were waiting for my appearance, and in a moment of quick thinking I would pull back in just as soon as I got one of them to take notice. As soon as he came around the corner, I blasted him away, took his shotgun, and proceeded to take out the other two.

Trust me when I say that the above scenario is but one of the many times where you'll need to use your brains to win rather than your character's brawn. Even after dying over and over again during a difficult level the feeling you'll get after finally clearing a floor will be euphoric. Hotline Miami 2 may be tough as balls, but it doesn't let you feel helpless...unless you run out of ammo in an enemy-filled room, in which case you're probably screwed. 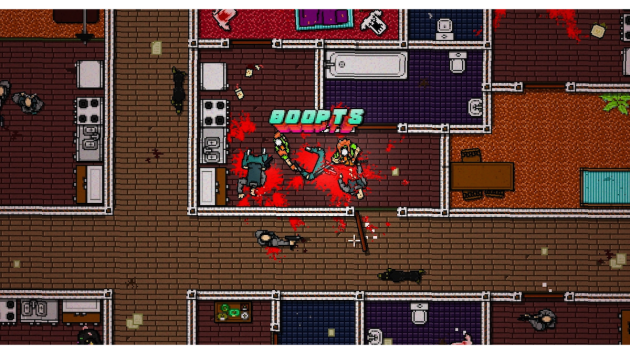 Its twin-stick control mechanism can either come in handy or be a bit of a nuisance during long play sessions. While its layout is fairly easy to figure out and remember, after putting down the controller I did experience some pain in my wrists from all the aiming and quick weapon-switching. If you are not familiar with these sorts of games, then you may not want to spend too much time with the game and play it in smaller doses. (Otherwise you may want to invest in some wrist braces.) I am surprised by how much handier the lock-on system felt here than in the other one, as it certainly helped take out some of the more powerful enemies from a safer distance.

The usage of multiple characters certainly helps to flesh out the world that Wrong Number creates. Instead of just one psycho, we're dealing with multiple, and Richard appearing to these people nails the mindset that they seem to have. It brings to mind a blend of both classic grindhouse violence with a dash of cocaine-fueled sleaze that the '80s were famous for churning out in droves. Depending on how you look at those kinds of entertainment — whether if you take them too seriously or see them as harmless, gory fun — will probably either help or hurt your interest for both this game and possibly its predecessor. 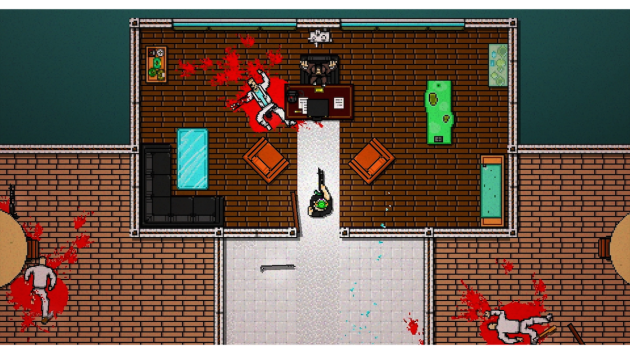 As with all titles such as this, there is an elephant in the room, and it regards a scene from the "Midnight Animal" arc. Towards the end of the level your character appears to prepare to sexually assault a victim, until a film director appears to end the scene and put an end to production for the day. It's the sole reason why the game was banned in some countries, but while the act can be pretty grotesque to the vast majority of people with a hint of common sense it's not as graphic as, say, a part in a later level where you rip a man's head off with his spinal column dangling below. So just to be clear: it's a disturbing scene, but it's not the worst image you'll walk away from in this game. (Players do have the option to censor this scene if they wish to.)

Graphically Hotline Miami 2 looks more vibrant than its previous title. While it keeps to the old-school NES-styled appearance there is surprisingly a lot more detailed aspects, from the way someone's intestines might be hanging out after being sliced in half or how a severed head may keep on rolling as you walk alongside it. The bright neon worlds may remind some of the era of Miami Vice and Scarface, with some of its more darker aspects coming straight from Nicholas Winding Refn's Only God Forgives. 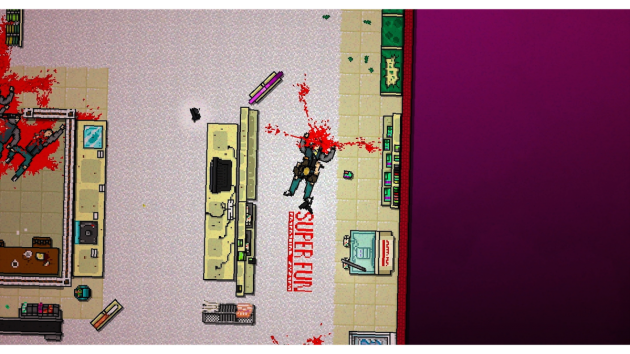 The real star of Wrong Number is its soundtrack, one of the best I've heard in years. With original works and selections from Magic Sword, Scattle, Carpenter Brut, Perturbator, and many others the urge to blare these songs during a late-night drive will be too strong for you to fight off. If you don't walk away from each game session humming one of these tracks, then you're either deaf or have a horrible taste in music. (You can buy the soundtrack in both digital form or in a limited vinyl version.)

Hotline Miami 2 may take you roughly 15-20 hours to complete, depending on your skills. Some levels may take a few minutes to finish, whereas others will require an hour or two of testing its waters for the right kill combinations. Once completed you can then unlock a Hard mode that makes enemies more tougher and takes away the lock-on system. (A level editor will be added on later this spring.)

While this is the last we'll be seeing these brightly-colored neon worlds Hotline Miami 2: Wrong Number is one hell of a way to close this book of bloody violence and despair. With its shocking story and strategic gameplay there's no telling how many times you may want to put the masks back on and beat your previous times. Even though the thought of what's to come from Dennaton Games may be strong with both critics and fans everywhere, we should all be happy that the gaming world has been given such a gory gem like the Hotline Miami series. 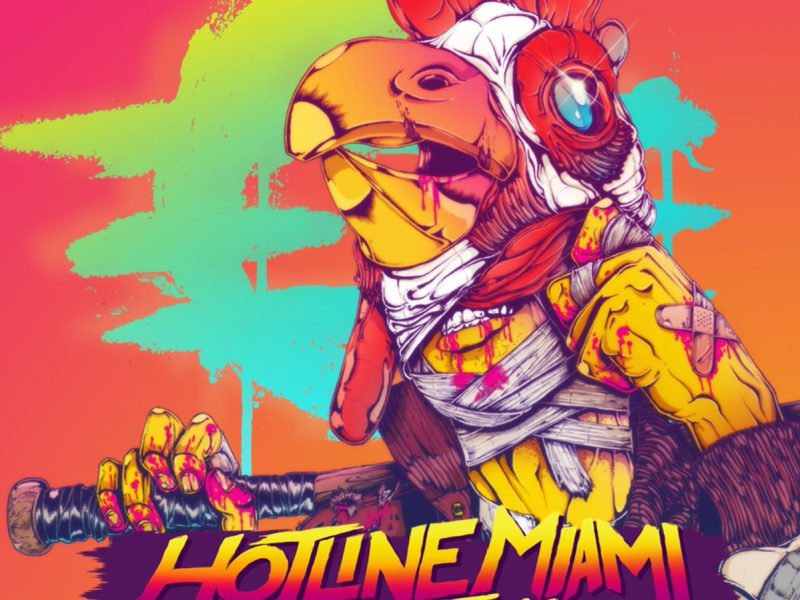 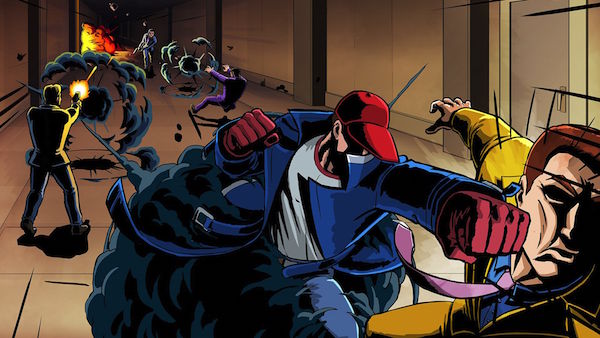