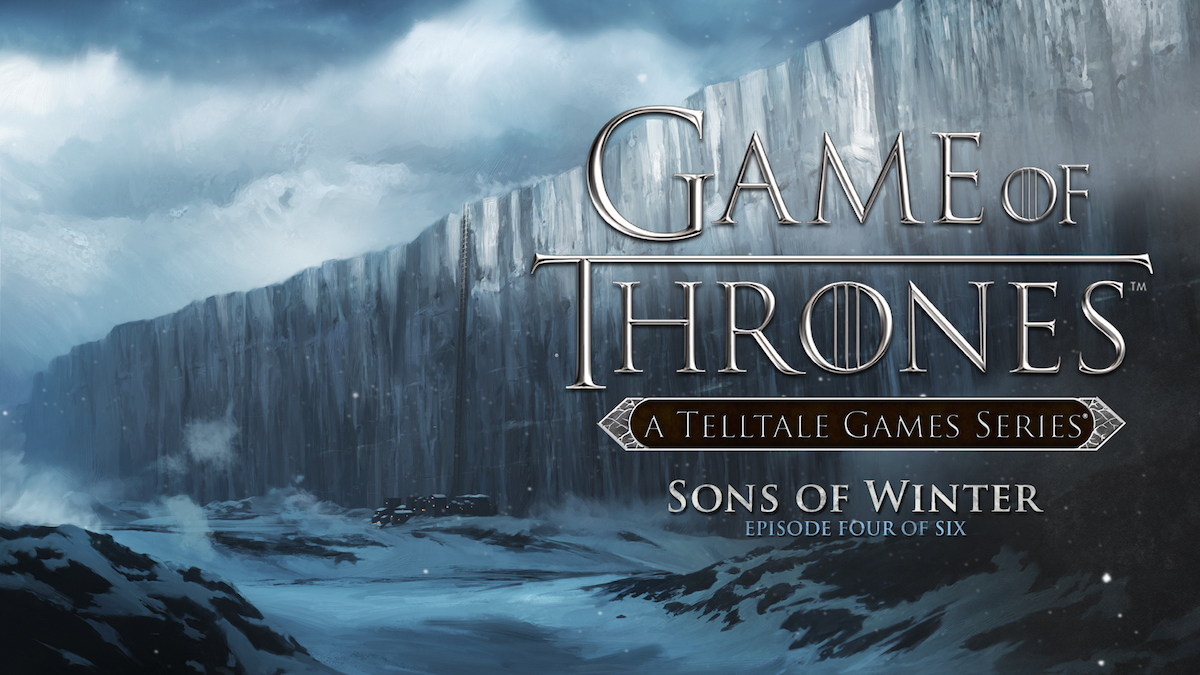 For three episodes House Forrester has seen its own blood stain the hollowed grounds of Telltale's Game of Thrones adaptation far too many times. It's here in Episode Four where the tides begin to slowly turn in their favor...or do they?

In "Sons of Winter" Ironrath is aimed to be reclaimed by Rodrik, as an unexpected ally shows up in his stead. As King's Landing crowns a new leader Mia aims to find enough info on how much danger House Forrester will be in. The slave city of Meereen is the target of Asher, but his friend Beskha has some doubts about returning to a town that bothers her as such. Meanwhile Gared escapes from The Wall, making his way to the North Grove with allies in tow.

It seems that a lot of story is pushed into these Game of Thrones episodes, although to be fair a whole lot also happens in both the TV series and the original novels. Fortunately it helps that the game focuses on just the one House rather than multiple ones, as it helps entwine the plotlines more fluidly rather than make them feel all jumbled together in a rough mess. Dialogue choices were tougher this time around, as any answered seemed like the right one to make (especially when it came to Rodrik, who had every right to say whatever angry, solemn, or sarcastic remark that was given to you).

It's when the characters take action when things start going really well in "Sons of Winter". For once it feels like House Forrester has taken control of their destiny, rather than looking like chess pieces being picked off one by one by the other surrounding houses. There's also the emergence of Daenerys, with Emilia Clarke acting as powerful here as she does on the HBO series. The fun gets going in two moments: when Asher, Beskha and Malcolm are sent to take down Meereen, and when Rodrik gives Gryff what's coming to him. To put it bluntly: the hammer strikes hard on the enemies of House Forrester, and it vibrates beautifully.

Sadly I cannot say the same about the graphics and animation. Characters look off, as if they weren't rendered properly. Worst of all is the lip-synching, as I caught too many moments of lines being spoken by characters as their mouths didn't move even in the slightest. I understand that multiple roads can be taken, which means that the game has to think fast to load up the repercussions of what was chosen, but if they can pull off the synching without flaw in the likes of The Wolf Among Us and Tales From the Borderlands then this issue should be nonexistent.

The writing may have been the strongest we've seen in this Game of Thrones adaptation, but graphically "Sons of Winter" was a step back from what Telltale is known to be able to accomplish. If they can put as much detail to the world of Westeros and its people as they had with the game's script then there will be far better balance both visually and aesthetically. Until then we'll have to settle for a Martin-worthy tale being paired with decent-looking surroundings.

Originally posted on the ESH EGMNOW Page. Check out our reviews of Episode One, Two, and Three here!