BFIG 2015 | Something Good Comes of This

In Cartwheel Games' minimalist local multiplayer game Nothing Good Can Come of This, two players are locked in a room together. After a few seconds a gun drops from the ceiling followed by a single bullet, and the players duke it out to control them both, at the same time. Once a player has both the bullet and the gun they can fire it at the other player. Hit them, and it's game over...and nothing good has come of this. 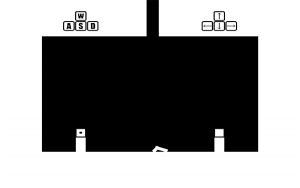 The real fun of this black and white, game is in how quickly the competitiveness between players escalates. Once the gun and bullet drop, players can jump - to evade one another - punch, or if you are holding the gun, chuck it at the other player. This lets you either slow them down or - if they have the bullet - knock the bullet loose from them.

We got to spend some time with the games' designer Michael Consoli, and learned the game was the result of a class exercise where students had to build a game prototype a day around varying themes. When "violence" came up, Consoli immediately thought of the dire violent, scenes in the movie "Saw" Nothing Good was born.

While Amanda and I got to play the game on an arcade-style console - with great-feeling joysticks - Nothing Good is available for $1 on Mac, Linux, and Windows, and is a local-multiplayer game. This means that you and another person use 4 keys on opposite sides of the keyboard to control your character.

If you're ready to try the game out, hit up the link below and see if you can find a way to make something good, come of this.

‘Blues and Bullets’ is a Brutal an...