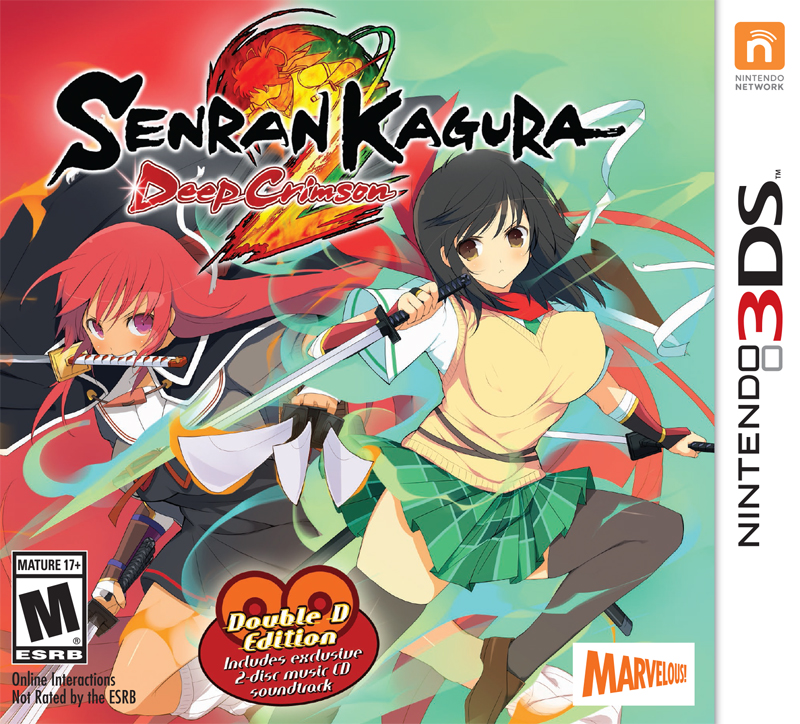 It goes without saying that Senran Kagura knows what its audience wants. Filled to the brim with fan-service and crazy combat the series has a knack for delivering certain aspects that appeal to its male demographic (and lesbian one, too, while we're at it). In spite of all the cloth-tearing and skirt-flipping actions Senran Kagura doesn't get some well-earn respect. So why should a game whose shinobi characters can't seem to walk away from a fight without losing their shirt/pants/whatever be deserving of some credit?

It's quite simple, really: it's a fun, well-made beat-em-up, a fact made very evident in Senran Kagura 2: Deep Crimson, the latest chapter in the series.

Deep Crimson takes place right after the events of Senran Kagura Burst, with three main storylines told throughout the game. First the female shinobi of Hanzō National Academy must take on the girls of Hebijo, whom have stolen the Super-Secret Ninja Art Scroll. Soon after these events Hebijo's finest decide to ditch their academy, after the school's financial backer Dōgen begins using the students for his master plan. Once all goes back to normal the shinobi of both Hanzō and Hebijo coincidentally run into each other during a Kyoto trip, where a mysterious young girl has brought forth an army of yōma for her own personal, lesser-evil ways. 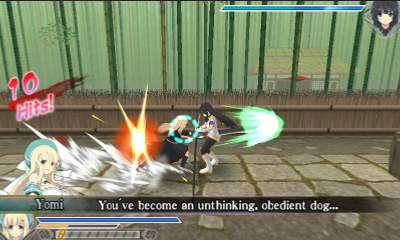 It's apparent that the plotline of Senran Kagura goes everywhere, with the focus on both the shinobi of Hanzō and Hebijo going back-and-forth. Playing this game feels like taking part in various arcs of an anime (which, of course, Senran Kagura got an adaptation of a couple years back), and the good thing about this story is that it doesn't have any of that filler that sometimes slows down the tale's progression. Yes, we get a hot springs episode moment with the characters, but that usually is in the realm of tradition found in anime.

New to the Senran Kagura series is the ability to battle in pairs, and surprising this comes in handy when dealing with multiple enemies during play-through. Many times while in heated battle I would die and switch to the other character in battle. If I got to the fainted character at any moment I could revive them, sometimes being rewarded with full health and a ninja scroll or two. However it can be pretty touchy depending on who you are playing as, since some characters don't work as well as others. (More on that in a bit.) 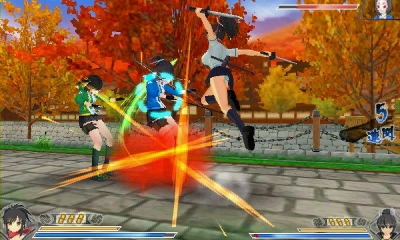 Deep Crimson should be given its dues for bringing us strong female characters (shocking, I know!). Everyone in Hanzō and Hebijo have their likable qualities, but what makes them stand out is the fact that they're incredibly strong-willed. Granted it's hard focusing on that when the shinobi are losing their clothes during battle, but those who can put that fan-servicey stuff onto the back burner will be pleasantly surprised by the determination and willpower these ladies contain in their hearts. It helps, too, that the characters are voiced by some of anime's best seiyu, with Hitomi Harada (Baka & Test, Unbreakable Machine-Doll), Yu Kobayashi (B Gata H Kei, Sayonara Zetsubou Sensei), Ryoko Shiraishi (Hayate the Combat Butler, Death Parade), and Yuka Iguchi (No Game No Life, A Certain Magical Index) rounding out the well-acted cast.

Okay, perhaps it's time we dive into the actual fan-service of the game. You can tell Tamsoft put a lot of effort into the detail of the characters and clothes, with revealing angles and the like. It doesn't hide this shame; rather, it somewhat celebrates Deep Crimson's perverted side, as evident in the Photoshoot mode in the Dressing Room. Here players can switch characters' clothes, position them in various ways, and even pair them up with another shinobi to make some...let's call it quasi-artful pictures. I'm sure certain demographics will huff and puff over these aspects in the game, but  those who don't take anything seriously about the Senran Kagura universe will certainly have a good laugh or two whilst playing. 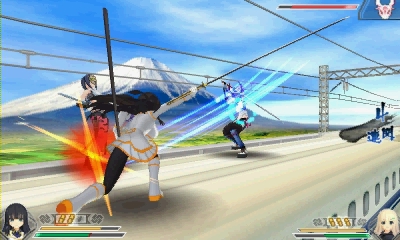 Now that we can move along from that, let's look into the actual combat of the game. Much like Tamsoft's other sexy game series Onechanbara, Senran Kagura has a sort of Dynasty Warriors vibe to its gameplay. You bat off many enemy shinobi, yōma, and other foes with your button-mashing skills. However what one-ups Onechanbara here is that the battles don't drag on for too long. Believe me when I say that Z2: Chaos got grueling during the later levels, with battles lasting 15-20 minutes. My fingers were hurting, my patience was wearing thin, and the monsters kept coming without any end in sight.

Here in Deep Crimson the longest battle took me roughly 6-7 minutes, and that included a mini-boss battle at the end of it. You may think that a short span such as this would mean that the game wasn't challenging. Believe me, though: the difficulty comes in hard and fast with some of these enemies. Many times I died, forcing me to have to level up a couple times before I could move forward to the next part of the chapter. In fact I became so irked by the difficulty that I sometimes downgraded it from Normal to Easy (which, thankfully, the game didn't penalize me for). Timed missions, however, were a major pain to go through. I remember these ones being tough from my E3 demonstration back in June, but wow is it next-to-impossible to beat these in both Normal and Hard settings. Even on Easy I barely won the level by the skin of my teeth. Perhaps next time Tamsoft can be a little more generous with the time given in these parts of the game.

The one thing I was a little disappointed with in regards to Deep Crimson was the lack of gameplay variety. The majority of the game had me go from one battle to the next, with a Point A to Point B (and sometimes to Point C) mechanism on each of them. It would've been nice to see a mini-game or two added in for good measure, like a nod to the cooking game Senran Kagura: Bon Appétit. Despite the lack of variety, however, I never grew tired of the many fights that were thrown at me during my play-through. Depending on who you use the controls in Senran Kagura 2 can be a little tricky. Using either Asuka or Homura's sword skills helped to lay waste to almost all the foes that came hurtling towards our blades, whereas Katsuragi's kicks and Haruka's wooden robot sometimes overthrew their hits, forcing me into a corner and resulting in the wrath of the enemy yōma. No character brought me as much trouble as Hibari, who had to habit of tripping over herself in battle once every ten seconds. I get it: she's clumsy. But for the love of all things bouncy you didn't have to put that aspect into her fighting mechanics!

Beating Deep Crimson will take you roughly 13 hours to do so. Once completed you can also dive into the various modes that are featured throughout the game. Special Missions will have you needing to defeat a gang of enemies via some specific qualifications, which may lead to some Shinobi Stone unlocks. Yōma's Nest will have your chosen character diving deep down a 14-floor pyramid, where the enemies become tougher as you progress. Succeed, and you'll walk away with some EXP, but fail and you'll lose a good chunk of it. (A tough task, considering you don't heal after a level's been completed.)

I know that some gamers will be turned off by Senran Kagura 2: Deep Crimson for obvious reasons. However those who can overlook the fan-service will no doubt discover a well-oiled beat-em-up with some great animations and a surprisingly deep story. You may come to Deep Crimson for its visuals, but you'll be sticking around for everything else it throws at you.