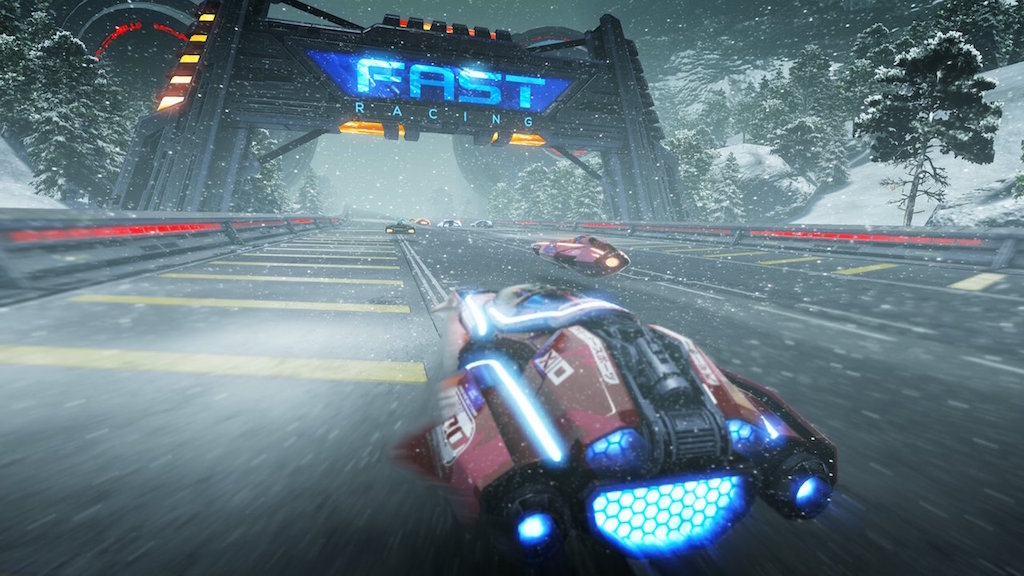 I can't remember the last time I've played a game so fast-paced that I swore I felt the wind blowing through my hair, and yet FAST Racing NEO does just that. Recently released in the Nintendo eShop, Shin'en Multimedia's sequel to the underrated WiiWare title FAST Racing Team, is one of the most thrilling racing experiences you'll be able to find on any console. In fact you may say it speeds past the competition.

FAST Racing NEO features sixteen courses and nearly a dozen vehicles to drive in. Each race has you speed through the course with a three-lap setup. As you progress in the race you'll be able to grab Boost orbs to help reach another level of speed, as well as steer yourself into a Boost lane to drive past your competition. However as the Boost lanes are set to different colors you'll be needing to be on your toes to make sure you ignite the Phase Switch at the right moment to get that extra push; otherwise you'll find your speedster transform itself into a slowster. 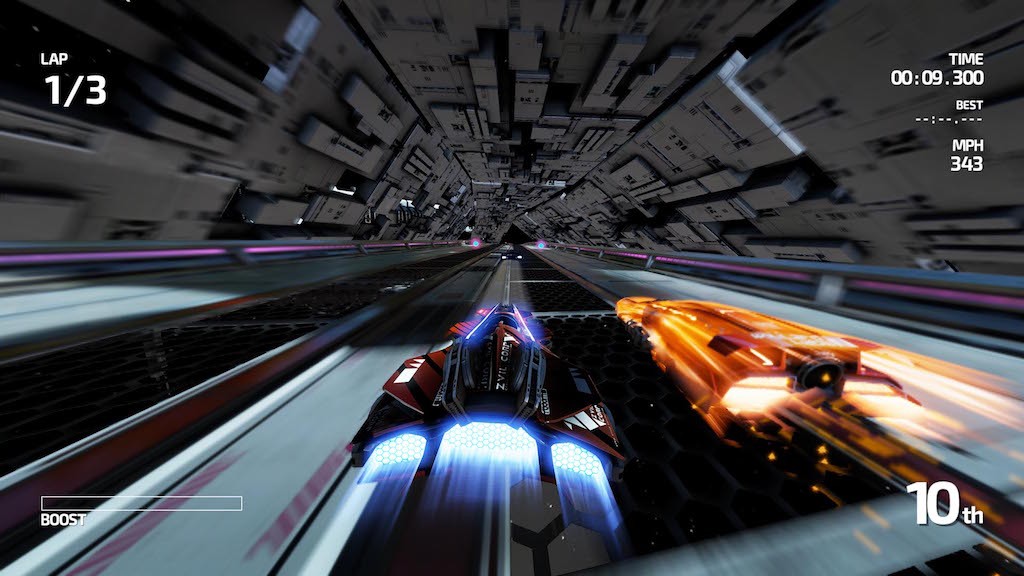 On top of that, some of the tracks feature some hazards that'll make sure you're paying attention to the road. You'll come across waterfalls, lava, falling rocks, giant robots, and meteorites that will crush you if you're not looking above. Then there are the other racers, who may ram into you with their boosts, or sometimes slam on you from above. In some cases they'll even find a way to put you off the road, resulting in fiery crashes or drops into disintegration.

These elements make FAST Racing NEO one glorious racing game. The thrills that'll spill onto your screen are simply exciting at every corner. Hurtling down a track as you nearly break the sound barrier will leave your eyes popping out of your head whilst you reach for the gold. Yes, it can get a little frustrating, especially if you make too much of a turn and wind up crashing, bringing you to last place, but that's where strategy comes in. You'll need to start memorizing the colors the boosts are, the sharpness of the turns that are far ahead, and careful use your boosts at the right moment so as to not waste them. Believe me when I say that you'll be quitting races left and right, but every loss you take will bring you closer to a future victory. 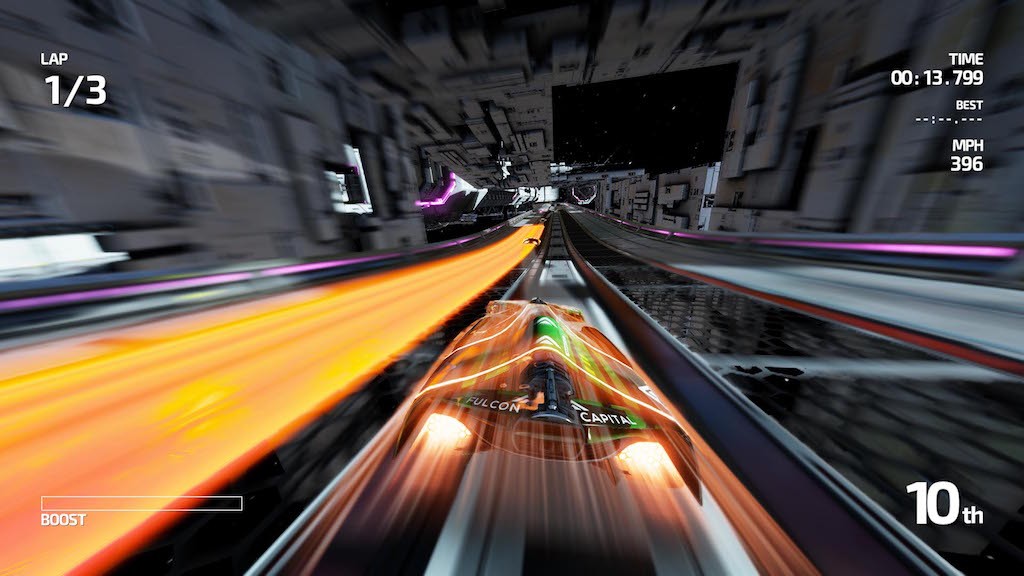 Shin'en Multimedia have also crafted some of the most beautiful tracks you'll see in any racing game. The snowy mountains, the fiery lava pits, the futuristic cities, and the majestic oceans are simply glamorous to look at. Mind you these attentions to detail will kinda look blurry as you speed through them, so it'll take awhile for you to truly appreciate the graphical wonderment that surrounds your vehicle. Racing, however, also looks stellar, with single-player and online modes running at a sleek 60 fps, bringing players a level of visual realism that will make them feel like they're right there in the game. (Just be glad there isn't a first-person mode, as the amount of people getting motion sickness would probably be in the higher-percentage level.)

Racing online in FAST Racing NEO is just as exciting. While it only allows eight players instead of ten it still contains that level of high-octane exhilaration you'll find in the single-player mode. Barreling through levels with friends or complete strangers brings down forth a fine degree of competitiveness that never reaches that more nastier level of gameplay that other online titles tend to have (although that also depends on who you are playing with at the time). 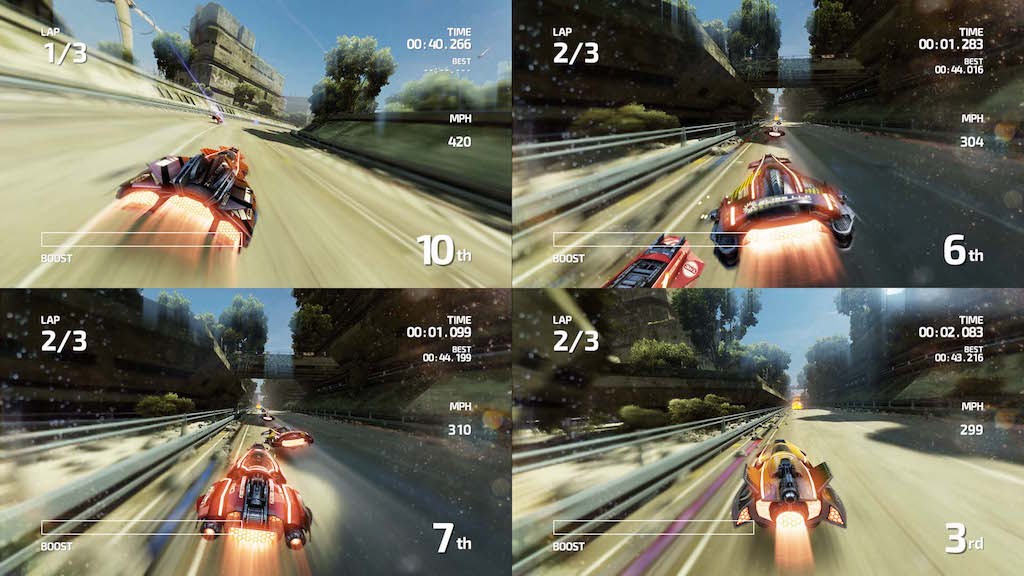 The one downside with the game is that you cannot change the control layout. As I'm not used to the certain setup it would've been great if I could switch the acceleration and brake with the Boost and Phase Switching. Motion controls can also be difficult, as handling a vehicle going 500 MPH is a lot more difficult than anything you're used to in Mario Kart. It would've also been nice to customize the look of the vehicles, but considering how fast you go in this game those details would surely smear off before the end of the first lap.

Make no mistake: FAST Racing NEO is one of the best indie games you can grab on the Wii U. With over a dozen tracks, a solid multiplayer mode on and offline, and some of the most beautifully futuristic graphics your eyes will see in any racer Shin'en Multimedia has brought forth one heart-stopping, jaw-dropping spectacle. Take note Nintendo: when it comes time to actually develop another F-Zero game, hire these guys to make it.

Thank god it's not Star Wars