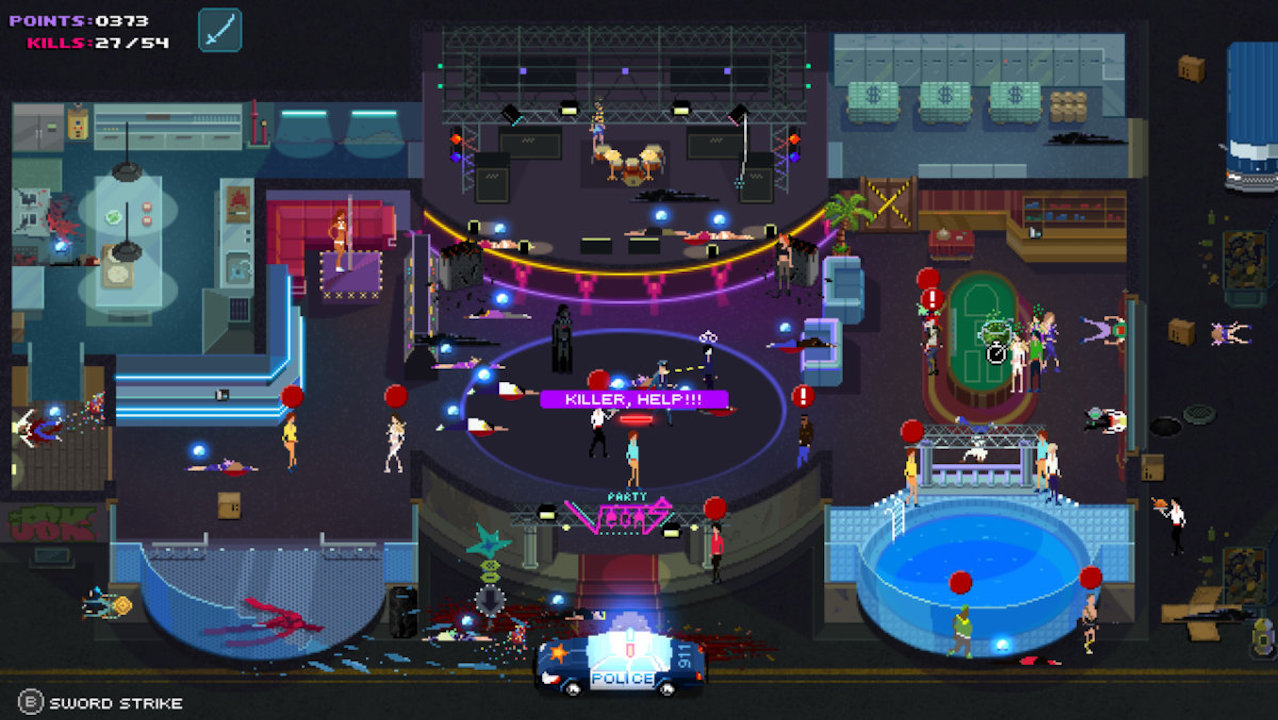 Party Hard started its life out as a quick game jam project, where in a just a day or so Pinokl Games concocted the concept of a man laying waste to a loud party next door. After loads of positive feedback the developers decided to expand their little project into a full-fledged title. The result is a game that's not only simple to learn, but also one that's incredibly hard to put down.

Party Hard has you going from shindig to shindig, as you kill every loud-mouthed person that dares to chug beers and dance into the early morning. As you play you'll find yourself having to be clever with how you murder the partygoers, be it hiding bodies or doing everything possible to blend in. If the cops are called -- and you're the target -- your best bet is to hightail it all around the party until the officer gets tired out and simply leaves. (Bouncers at certain parties will also do the same.) 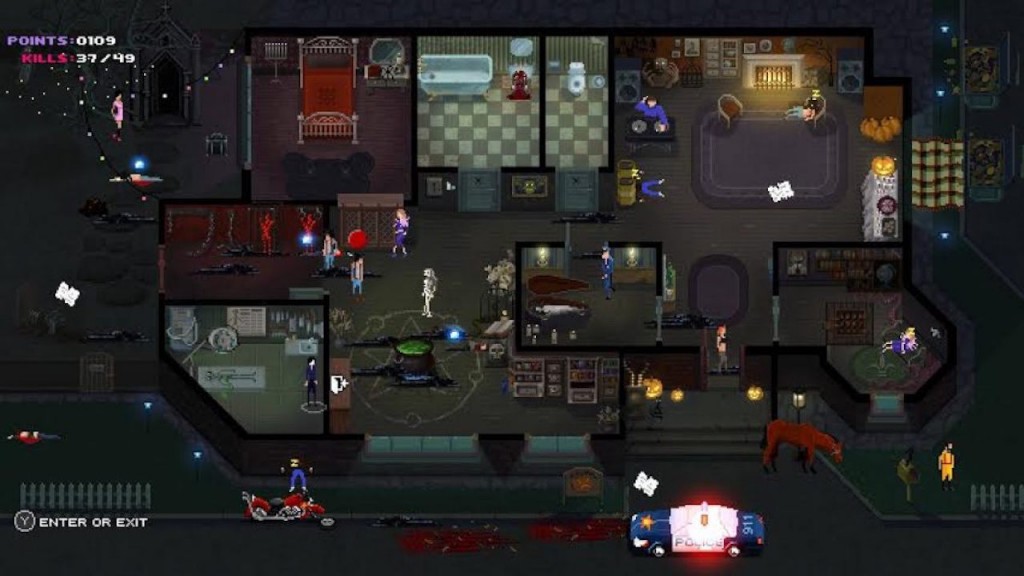 Throughout each of the levels you'll be able to use what's in your surroundings to your advantage. You'll find horses with a killer kick, saws and fans to toss people in, ledges to throw unsuspecting guests over, man-eating sharks, and even the occasional explosive speaker or Port-A-Potty. In some instances you'll be able to grab an extra item to use sporadically, be it a bomb, extra clothing, or even a running technique that'll help to outrun cops. You can even call in some "friends," such as aliens or zombies, and have them make a mess of things. (Playing live on Twitch can also execute various commands thanks to viewers typing in keywords, so it's also worth streaming live at least once to see what would could happen to your game.)

Party Hard is all about making the proper strategic kill. Like the Hitman series your objective is to blend in with the crowd and strike when no one is watching. Believe me when I say that the game gets tougher when there are less people around. Trying to time later kills when the remaining partygoers are usually huddled together make it all the more challenging to land those final strikes. Sometimes awkward dancing helps, whereas other times you may be forced to lay some quick kills before someone can run and call the cops. During my play-through I counted at least a dozen times where I had just a couple kills left, only to screw up and have the fuzz bust in and cuff me. 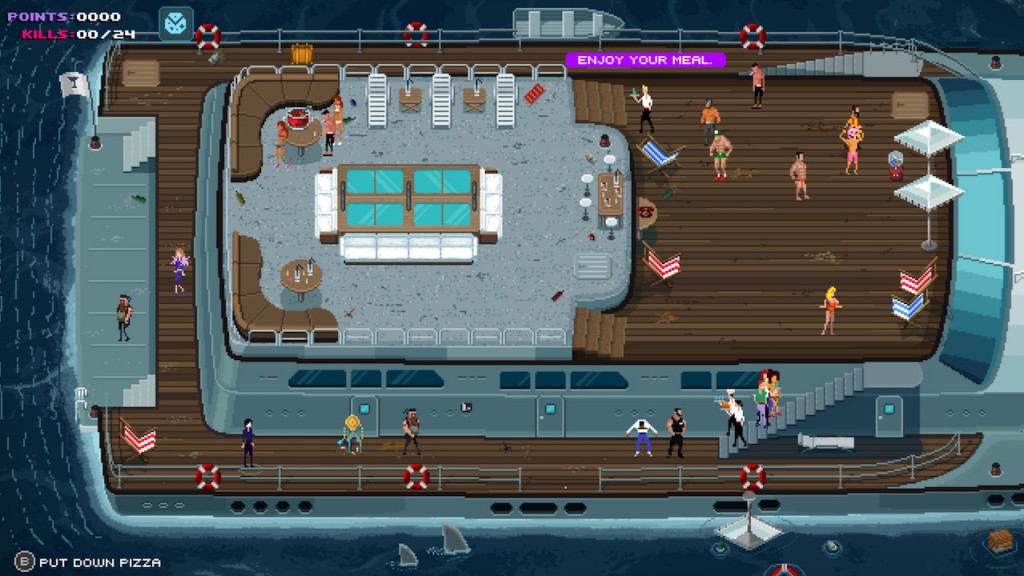 Pinokl Games' creation sounds rather brutal, and in some eyes it is. However what makes this game stand out is its usage of humor throughout the levels. You'll find clowns partying it up with Darth Vader, Mario appearing to shut hidden doors in order to foil your future escape plans, dogs acting gangsta, and the occasional hungry panda wanting to feast on human flesh. Not only do these humorous aspect help to tone down some of the game's frustrations, but they also can lend a helping hand when in need of completing a level. During one level I found calling up a zombie clan and waiting for a good chunk of the patrons to go undead was far easier when attempting to make some quick kills without worrying about the cops.

Party Hard does have somewhat of a serious storyline. Detective John West is recalling the infamous Party Hard Killings of Autumn, 2000. Things turn for the more personal when it's revealed that the Detective's daughter was caught up in the murder spree, as she began to emulate the killer and follow him around. The game does its best with presenting the story aspect in a grim light, but I couldn't help but be taken out of the immersion due to the choice in voice-acting. (Whoever did the voice of Detective West sounded like Christian Bale's Batman suffering from bronchitis.) 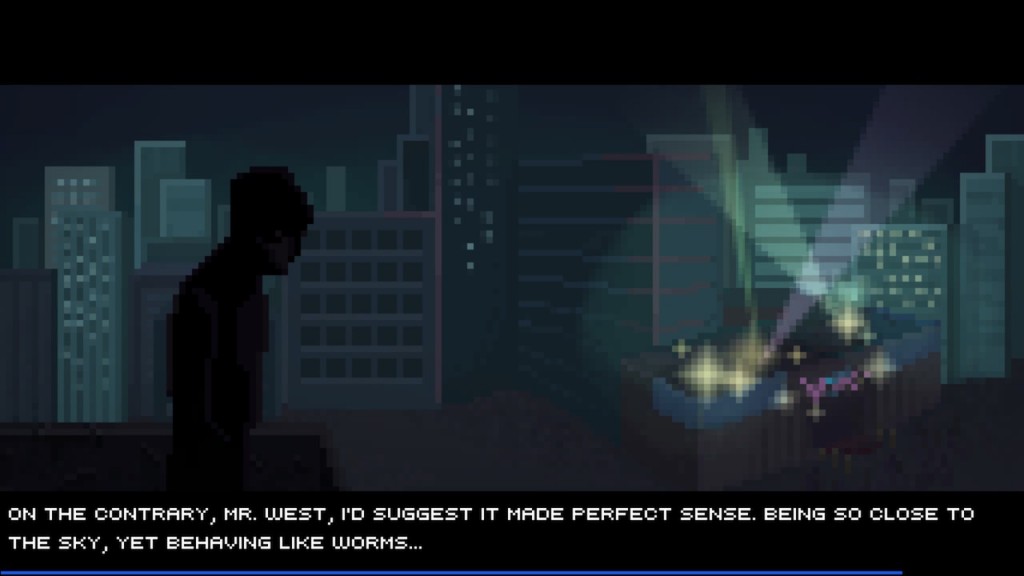 The majority of the game is addictively fun, as every failure you make just pushes you into wanting to try again. However I did find some strange bugs that would occur while playing. On some occasions I would perform a command -- be it a kill or something more complex like tossing someone into an air vent fan -- and it wouldn't do it unless I kept pushing the button over and over again until it did. (One incident resulted in me losing the level, forcing me to start from the beginning.)

These bug are rather minor, and have thus far in no way taken away from the overall experience of playing Party Hard. Depending on how good you are you can probably complete the full game in about five hours, although someone with my skills it was more on the 10-11 hour scale. Completing various tasks (hiding all the bodies, evading police a number of times) will also give you unlockable characters that have their own set of skills in the art of killing.

Party Hard is a simple yet violently fun game that you'll find yourself playing for hours on end. Even when the levels start getting harder there is a lot of enjoyment to be found when plotting your next attack. In short: Party Hard is one game that you most certainly should RSVP to.