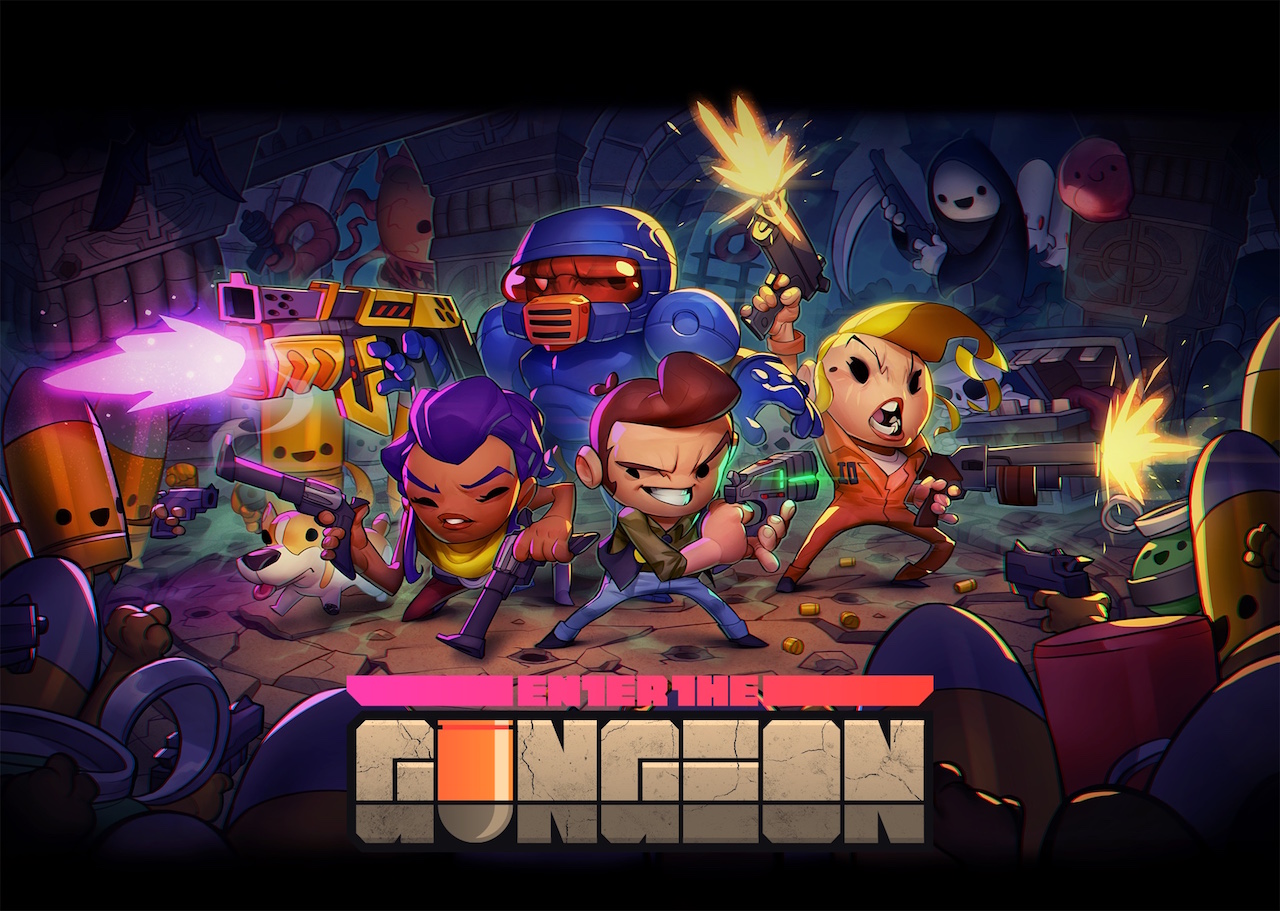 After watching my character die for the hundredth time in Enter the Gungeon, I found myself backed into a corner. Seven hours into this game, and I was still stuck in the first area. Did I just suck at it, or is the game that insanely hard? Once I pondered over that question, I realized that the answer may be a combination of both.

Taking place on a faraway planet Enter the Gungeon tells the tale of a powerful gun that is said to be able to kill the past. Located in a gigantic fortress, the gun is held protected by living bullets and other strange monsters that roam the planet's surface. Four adventures, all with their own stories to tell, decide to embark inside the fortress, in hopes that they can grab the legendary gun and use it to make their miserable lives all the more better. 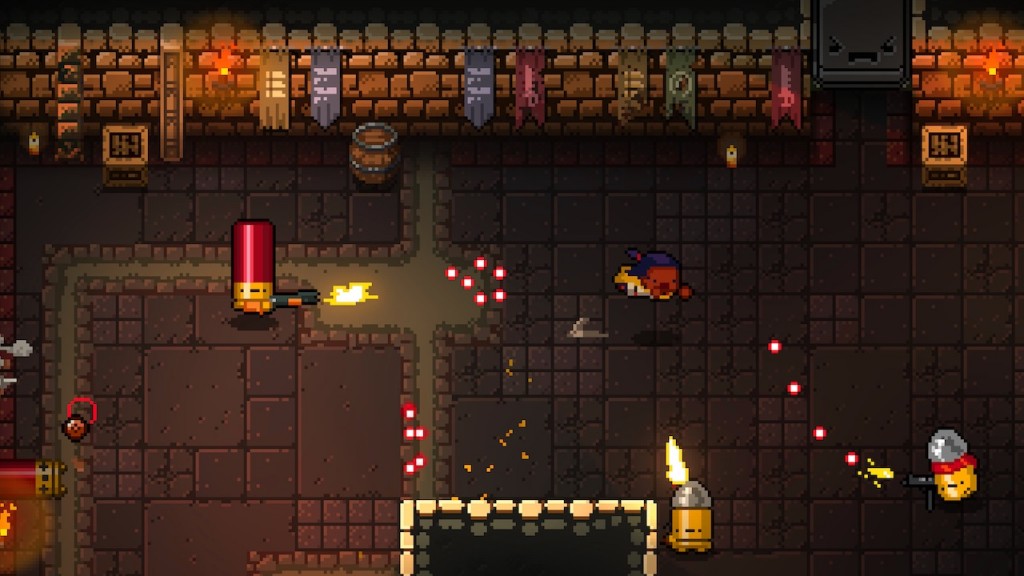 Dodge Roll's concoction is a massive beast of a video game. In order to survive the only thing you can do is run, gun, and dodge all around the level layout. Using the left stick to maneuver and the right one to aim players have to practically be on the move at all times when enemies roam. These opposing forces don't have your run-of-the-mill AI intelligence; these beings are smart and know where to make it hurt for your character.

Tapping the L1 button will perform the dodge, whereas R1 will fire your weapon. Despite the nonstop craziness that occurs on-screen the control scheme is rather easy to remember. (It also helps that the game's tutorial knows how to hammer the mechanics into your brain so they stay put throughout its duration.) Switching weapons and secondaries with the D-pad is also quite simple to handle. 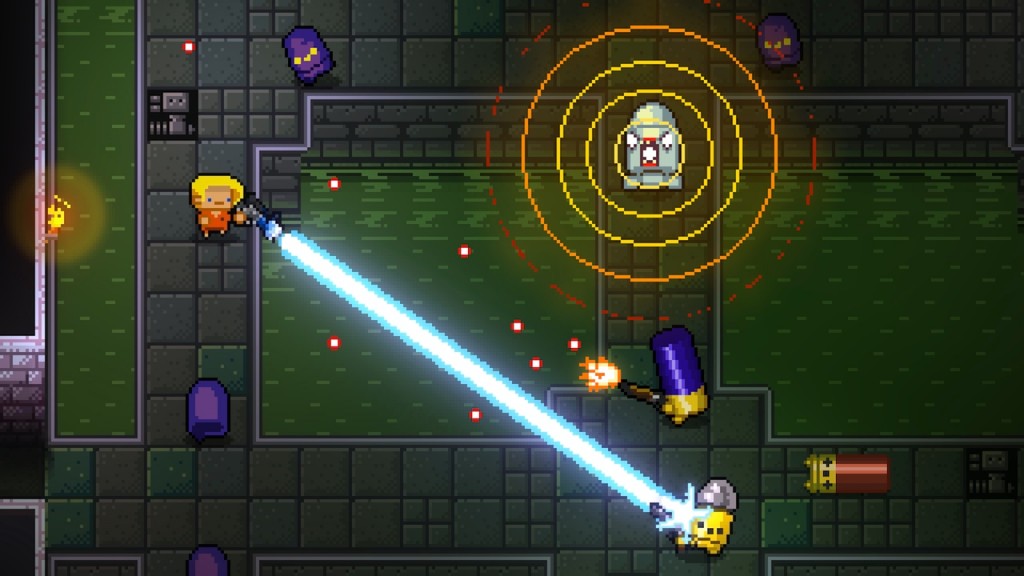 The four main characters in Enter the Gungeon each have their own special techniques to get them through the violent fortress, with one having the ability to pick locks and another having a fluffy corgi friend that can help grab items laid out throughout the levels. Bigger and better guns can also be discovered, some of which could come in handy when dealing with boss battles. (In one instance I came across a flare gun, which helped to continuously damage an enemy until burnt out.) You'll also come across random stores that will have much-needed health, keys, and extra ammo that will assist in extending your life span...for the right price, of course.

Trying to conquer at least the first part of the game is majorly difficult. Throughout my current time with this title I have yet to pass the first boss battle. As the game's level layout -- as well as which enemies plan to appear -- are randomly generated, it's next-to-impossible to chalk up a strategy that will help you move onto the next area. it brought to mind The Binding of Isaac, another video game I've played where I have yet to get out of the first segment despite playing it for hours on end. 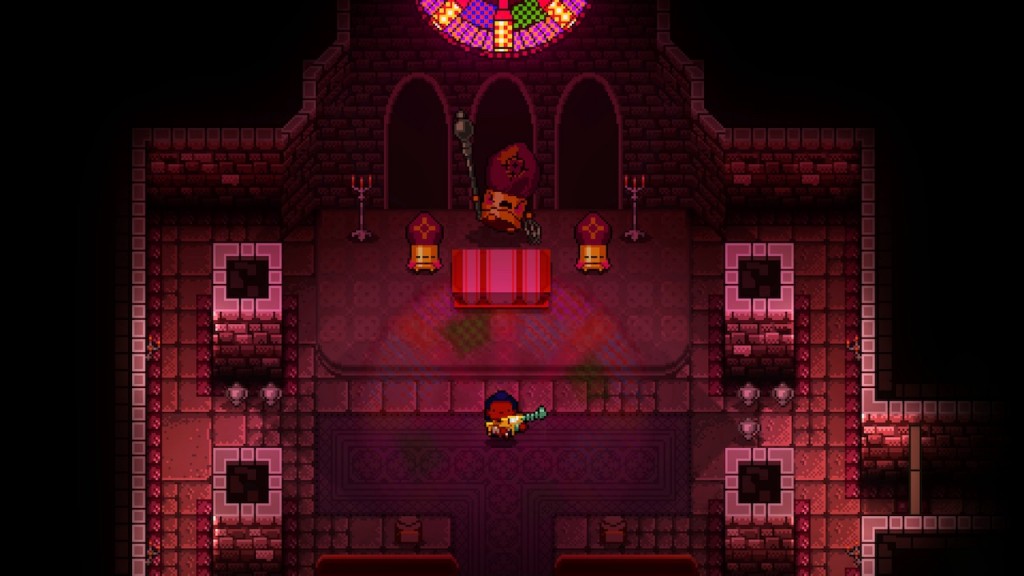 Enter the Gungeon is no cakewalk; in fact tackling this game is like walking on eggshells that are rigged to explode on the very first crack. However those who begin to succeed will be awarded with permanent special items after certain boss battles, of which will continue to be available even if you wind up dying in one area. Those wanting to unlock these new items quickly may want to bring a friend into the realm for some co-op, where Player 2 will take helm of a fifth character.

The overall look of the game is rather adorable-looking, with the characters looking like they've walked off of a Pendleton Ward cartoon directed by Frank Miller. Bullet enemies bought to mind the Banana Guards from Adventure Time, only instead of being clumsy doofuses these creatures have the knowhow to deal out pain to their intruders. It's also rather fun that just about everything in a room is destructible, which comes in handy when you need to take out some frustataration due to having half a heart left and the boss battle door being the next thing you walk through. 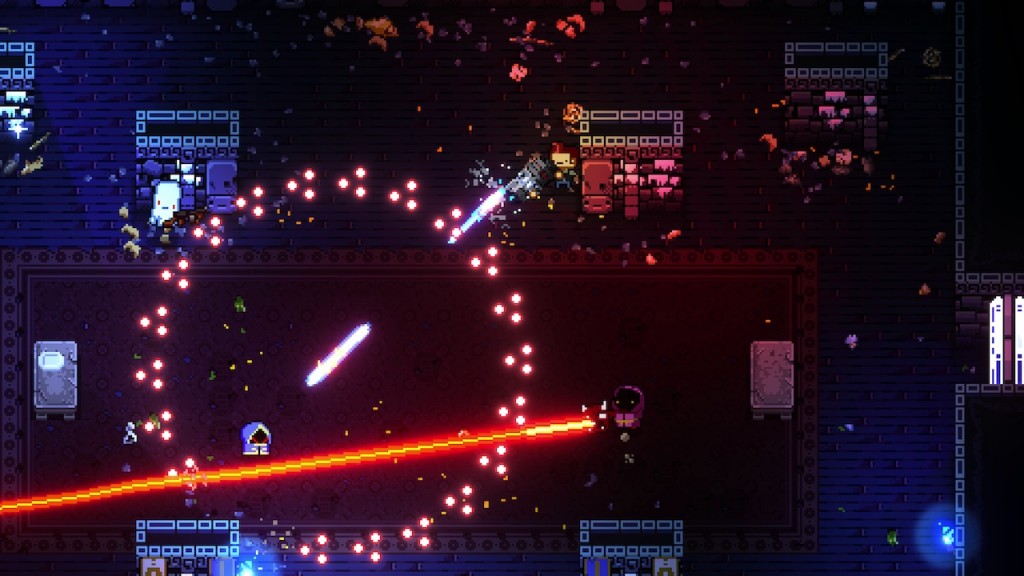 The piece de resistance of Enter the Gungeon is its soundtrack. Composed by alternative rapper doseone the music that blares while you throw down is incredibly memorable, with every mood set properly at every turn of the game. The beats hit heavy, and the opening theme song will easily have you singing along as the game's title screen sits idly in the background.

Enter the Gungeon is not a game for everyone. It's one tough nut to crack, and those who don't like being challenged right off the bat may not enjoy themselves. However if you have the ability to find the fun in meeting your demise over and over again while trying to hone your skills will probably do better than those who always look for the easy route in gaming. There is no hand-holding here, just wanton chaos and death at every corner of this pixelated landscape.

Enter the Gungeon is a brutal test of one's reflex skills and patience. It's the kind of game that will have the rage-quitters spewing obscenities like hot lava, and the type of experience that shall keep those looking for a challenge well-occupied for days on end. I'd advise that only the most advanced players even attempt to tango with it, but even then the best gamers may find themselves defeated by these adorable killers. My advice: go into Enter the Gungeon as if you know death is imminent, and maybe -- just maybe -- you'll have a pretty good time with it.

Which Pokemon is your favorite? No...