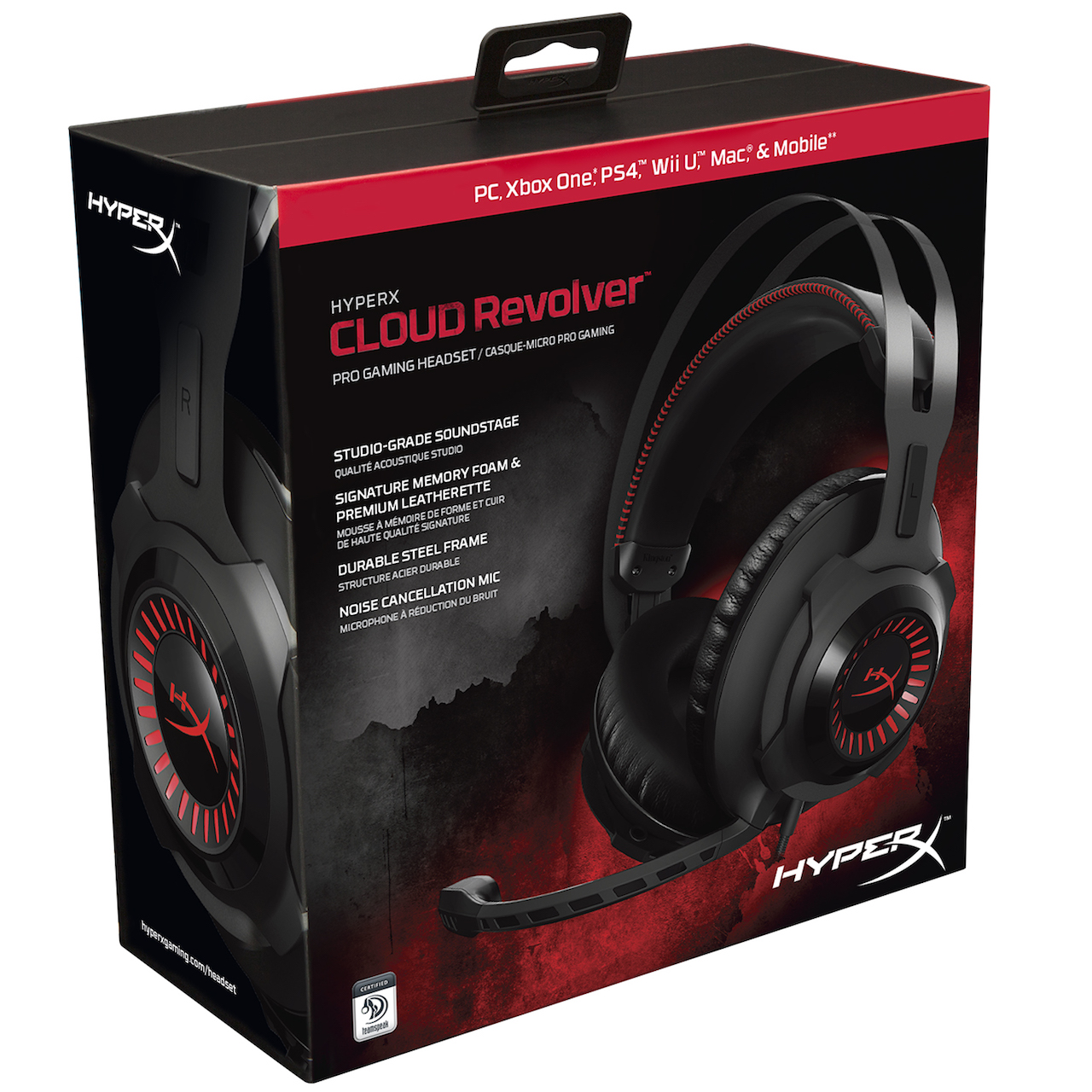 The thing I appreciate most about Kingston's HyperX brand is that it takes some of the best technology around and gives it to the consumer at a very affordable price. For the past two years I've been an avid user of their CLOUD headsets, with the CLOUD II being probably the best one I've ever used. So another year has come and gone, which means it's time once again for HyperX to reinvent themselves. With the CLOUD Revolver the tech has been upgraded greatly, but it sadly comes with a price.

For starters let's take a look at the entire kit-and-kaboodle that the CLOUD Revolver comes with. Included with the headset is a detachable noise-cancellation microphone and an audio control box with dual 3.5MM stereo & mic plugs. The headset is compatible with PCs, Macs, PS4, Wii U, and the Xbox One, and for the most part the compatibility works great with them. However those like myself who own a MacBook Pro that lacks a mic jack will find themselves having to use the CLOUD II's USB connector in order to make it work; otherwise you may be out of luck.

When it comes to its comfort level, for the most part the CLOUD Revolver does a fine job. With its suspension headband it makes adjusting the headset to your shape all the more easier. You simply put it on, and it clicks into place. Its memory foam covers not only helps keep outside loud sounds to a minimum, but it also cups your ears rather than push down on them like some other headsets tend to do. Factoring in the suspension technology you can go about two hours without the pressure becoming bothersome, which is a bit of a step back compared to the CLOUD II's pressure-free three-hour period I usually experience.

It's when the sound quality of the headset comes into play when you see the capabilities that HyperX are able to pull off. Testing it out with the recent DOOM game the CLOUD Revolver captures the stereo sound in such a way that it almost feels like a surrounding experience. You feel like you're right in the middle of battle, as the blasts and roars of the demons whilst its industrial metal soundtrack blares loud and furiously into your ears. The sound quality the Revolver showcased made my heart pound with excitement, a feeling that should be a standard in the realm of gaming headsets.

A new microphone design for this new CLOUD comes with both its share of pros and cons. On one hand it's actually the easiest microphone to pop in and out of its detachable holder, and with its rubbery outer shell it makes adjusting the mic to your comfort needs fairly simple. Testing it out with a recent Podcast recording on Skype I was able to see whether or not I was coming in well enough for my guests to hear, and according to them I was coming in loud and clear.

However it's when I went back to edit the Podcast when I began to hear some of the flaws with the new microphone. Since the mic doesn't have a windscreen like the previous CLOUDs had, my breathing was coming in a lot louder than it should've been. It also caused my B's and P's to be more emphasized than they really were, which personally made me jolt each time I heard myself use those consonants. While the new microphone has a great design, it still needs work in the sound quality department.

HyperX's CLOUD Revolver has its perks, from its fantastic sound quality and easy-to-use setup to its fine comfort level. However it isn't as comfortable to wear as the CLOUD II, and the microphone quality is a bit of a downgrade compared to the previous one. The CLOUD Revolver is a step in the right direction in regards to its durability and design, but it still needs to work out the kinks in regards to making gamers and Podcast hosts both sound good and feel the most comfortable. If you are looking for an all-inclusive headset then you can't go wrong with the Revolver, but those who are already in possession of a CLOUD II would be advised to wait for the next incarnation before upgrading.