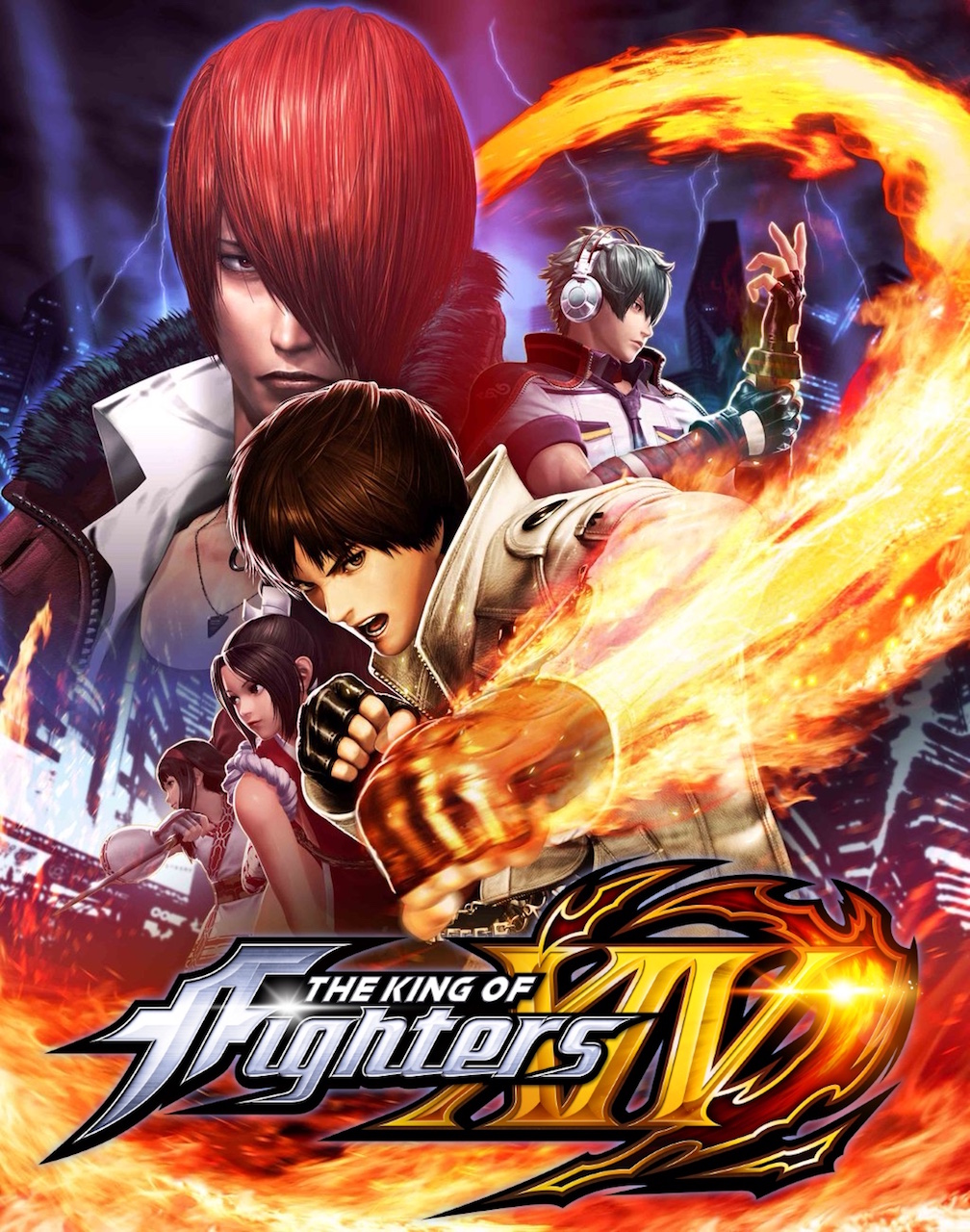 Sometimes, a franchise king hides in the shadows while the other contenders vie for the spotlight. In the fighting realm, the likes of Street Fighter, Tekken, and Mortal Kombat have clamored for the title of being the absolute best. Meanwhile, chuckling on its throne, SNK's The King of Fighters has decided that it's high time to hit the lights and jump back into the ring for its fourteenth incarnation. If the competition wasn't sweating now, they should be.

Fifty combatants have come to compete in The King of Fighters XIV, some hoping to score the belt the first time around, whereas others return to the stage to attempt to learn from their past mistakes. Players fight 3-on-3 in a best-of-five match to see who moves onto the next round. The game's main story -- told through ten arcade-styled rounds -- reveals that the tournament has been bought out by the billionaire Antonov, who claims to be the first champion. As the matches go on, a strange air begins to take shape in the clouds above. 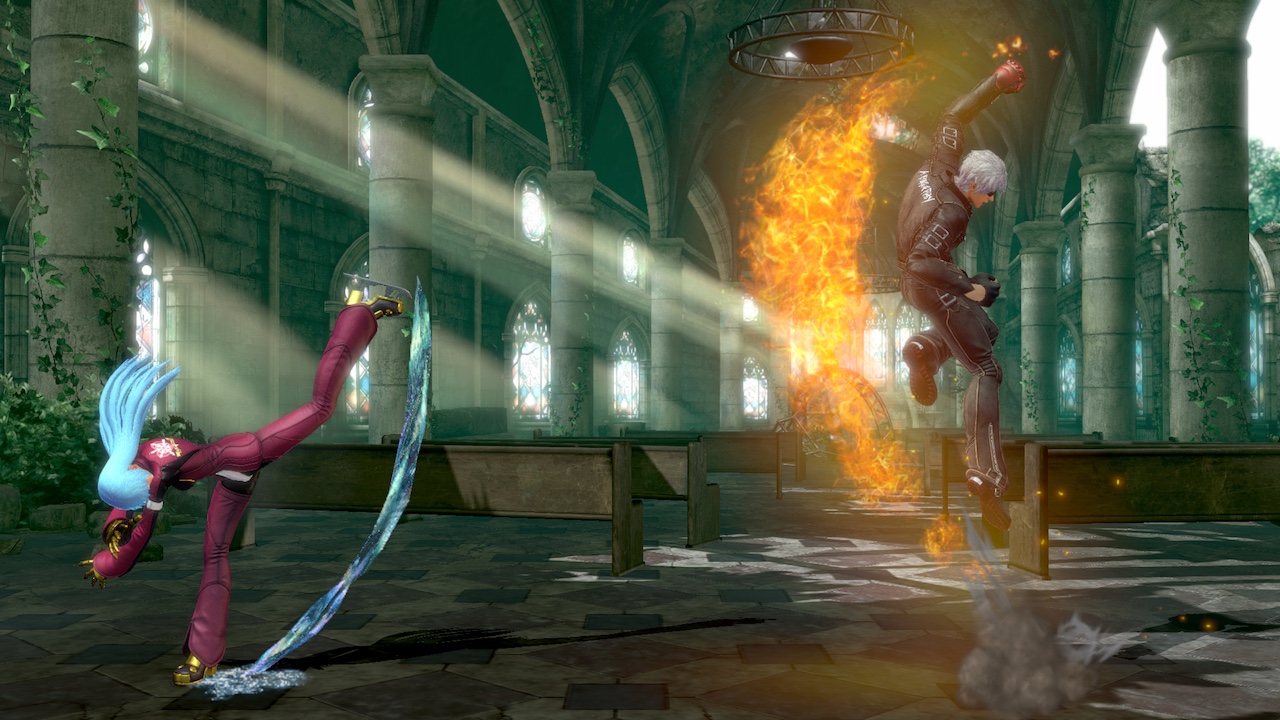 Taking part in the competition are a range of fighters classic, new, and crossover. The realm of the classic includes King of Fighters veterans Kyo Kusanagi, Kim Kaphwan, Iori Yagami, and Mai Shiranui. Newcomers to the fighting stage feature the likes of Sylvie Paula Paula (an obvious nod to J-POP idol Kyary Pamyu Pamyu), Tung Fu Rue disciple Shun'Ei, the robotic-armed and Bowie-ish Nelson, and the modestly sadistic Hein of the Howard Connection. Meanwhile, characters from past SNK titles such as Art of Fighting, Psycho Soldier, and Fatal Fury make up a good share of the roster, some of whom that have stepped in the KOF ring before, and others that haven't.

Before diving into its story mode, it's highly recommended that you go through the tutorial section, as even the most skilled fighting game player may need to learn a couple new things regarding this game's style. Some of the how-to's are rather standard, but when it comes to certain fighting techniques, there are maneuvers that are sorta non-existent in other games. Learning these moves can be a challenge on their own, so it's best that you try to learn all you can before you step foot into the ring. 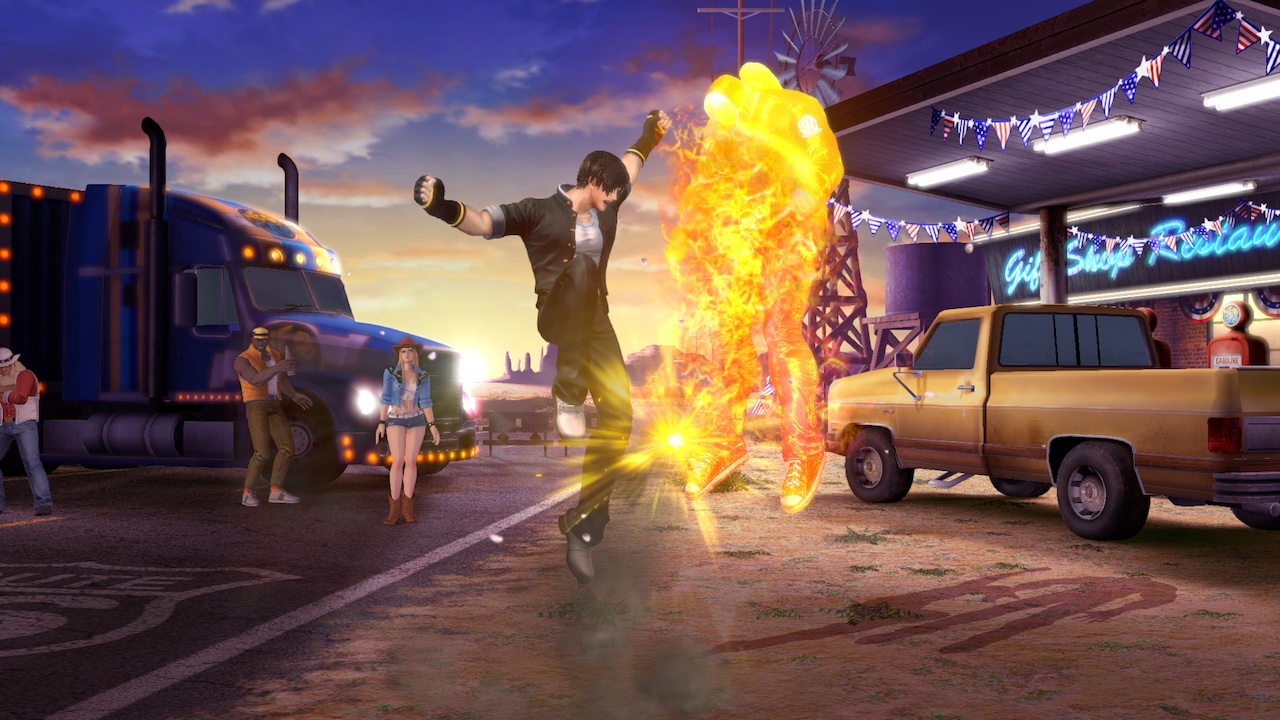 Once you've finished the tutorial, the real fun begins. Story Mode is fast-paced, with battles resulting in a hurricane of fists, kicks, and supernatural powers. Watching as Angel throws a Tekitou Rush or Clark Still whips out a Fisherman Buster on the screen will easily get the adrenaline pumping in every gamer. Even on the easiest of settings, the AI puts up a great fight, sometimes with rounds ending with a victory by the skin of one's teeth.

It's why it feels so good to pull off these techniques with the game's fantastic control setup. Using the DualShock 4 to lay the smackdown upon any of your opposing pansies comes fairly easily, with regular and strong punches/kicks and combos flowing through your fingertips like lightning. Some of the more complex attacks do take a long time to master, as their layout seems to be more suited for an arcade stick. With that being said, the masterful moves aren't impossible to learn on a regular controller, but you'll have to do some extra finger exercises to get it right without cramping up. 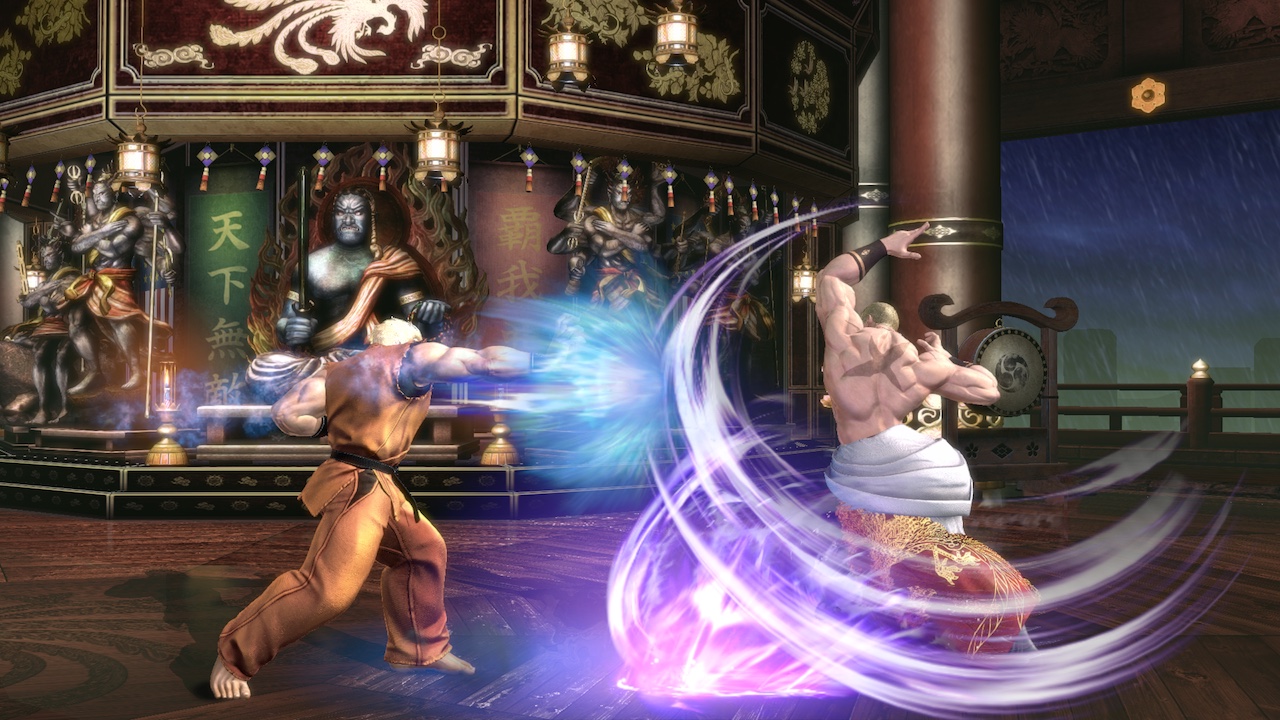 Graphically, the world of The King of Fighters XIV is gorgeous, with even the tiniest of details put into what goes on in the background. I love how the fight can be seen me on the big screens in Antonov Super Arena, as well as the beauty of the surroundings shown in The Great Wall of China. Livelier areas like the Day of the Dead-themed Guanajuato Dynamite Ring and Disneyland-inspired Dream World are filled with so much personality, making you wish you could interact with these surroundings in some way like the recent Mortal Kombat and Injustice games let you do. The showstopper of locations is Hotel Marine Paradise, where the aquatic fish and mammals swim in the background with pure majesty.

The fifty fighters that step foot onto the battle arenas are brimming with uniqueness, with nobody suffering from what I would like to call clone's disorder. Some characters may share fighting styles, but their flow and technique help to make them stand out from one another. While it doesn't go into the heaviest of details in regards to clothes being ripped or faces swelling up from bruising, the attention to the way a character maneuvers -- even when they're just standing there waiting to strike -- is worthy of being praised. 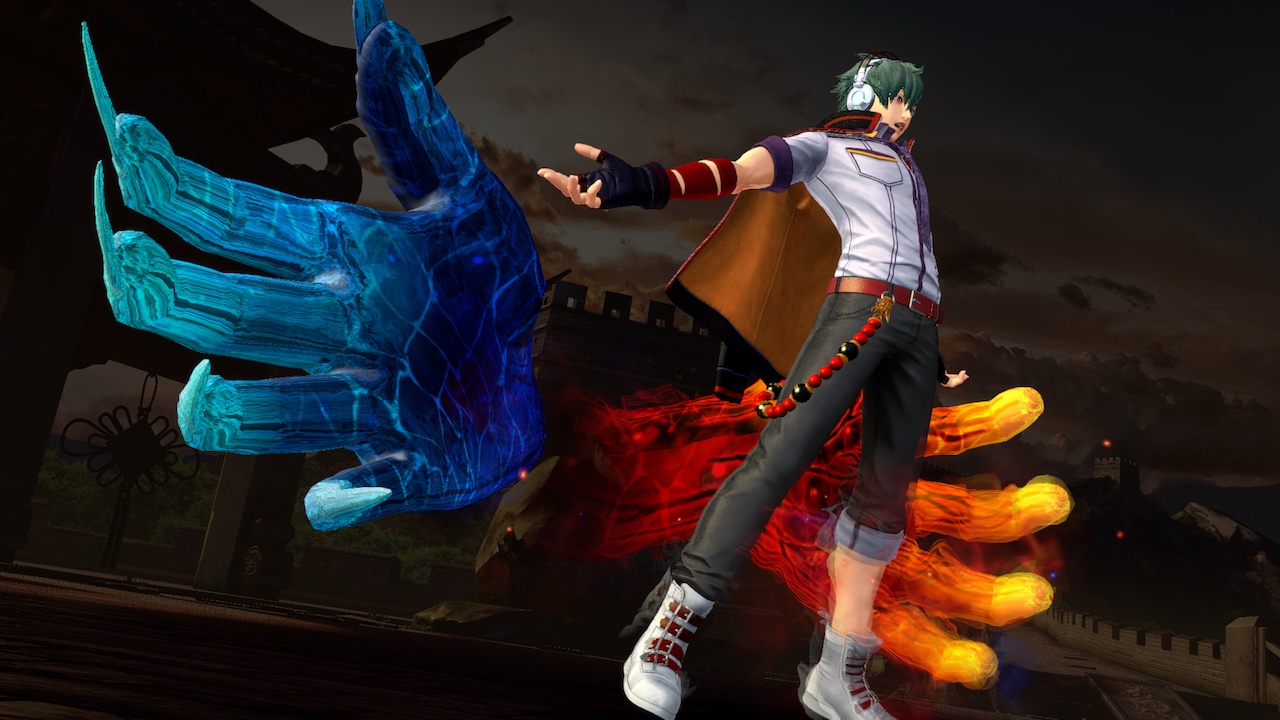 Outside of the Story Mode, players can also take part in a one-match versus mode, where you can have either 3 vs 3 or one-on-one battles versus a CPU or your friend. Survival mode is a nonstop battle where you keep fighting other combatants until you drop, and as you reach higher numbers, the difficulty reaches greater heights. Time Attack will have you attempt to beat ten fighters as quick as possible, whereas Trial has players attempt the extremely difficult task of doing multiple combos in one single bound.

Online Mode also plays hosts to various means of battling with friends or other online contestants. Ranked Match will have you attempt to rise to be the best in The King of Fighters XIV. However, if you just wanna fight without truly competing, you can dive into a Free Match in a Team, Single, or Party Mode. You can even spar with friends in a Training Mode, which can certainly help hone your skills against real combatants rather than with AI ones. Players can download and watch various Replays, as well as upload their own for others to watch. 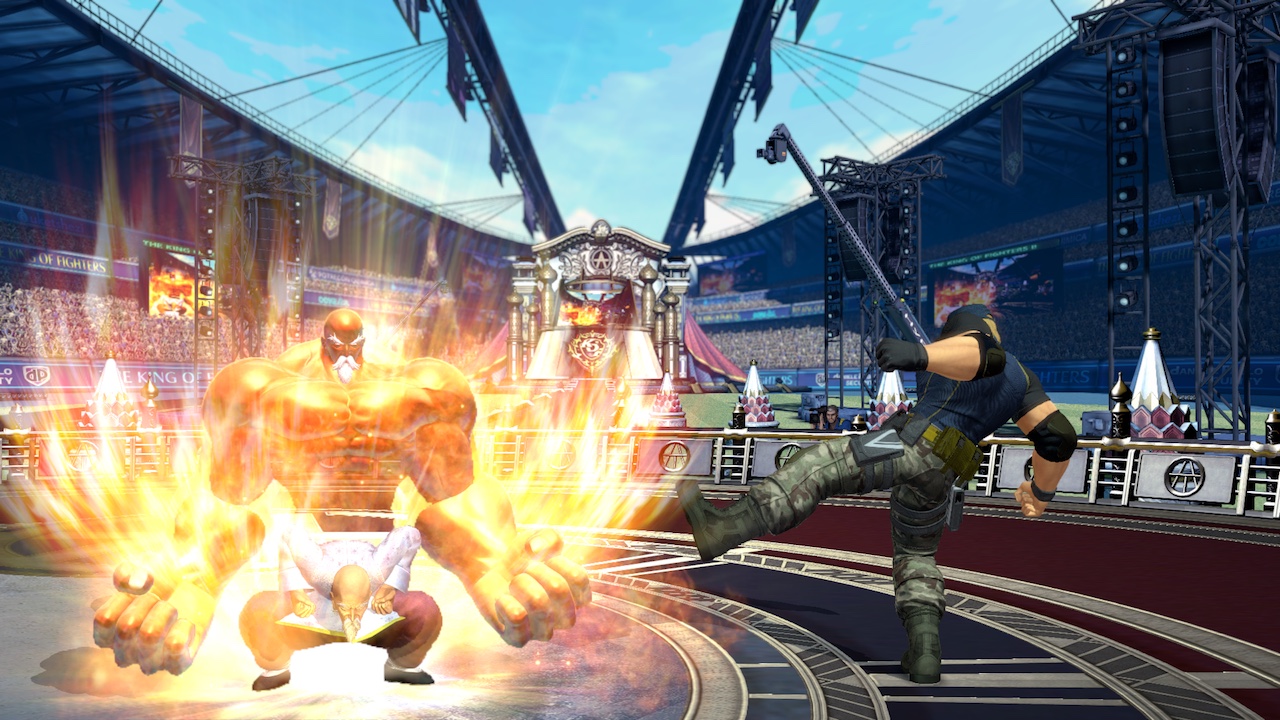 As of this writing, the Online Mode is fairly stable. However, I did notice that some of my matches -- especially those with more elaborate background settings -- tend to slow down during battle. For now, expect a little slowdown depending on where you fight, but whatever kinks that may be in the system shall be worked out with a couple updates and a boost to the game's servers.

As you play through various modes, you'll also unlock a foray of goodies in the game's gallery. You'll find character sounds, selections for the game's soundtrack, and the FMVs that you've viewed already in this area, but you'll also come across various concept art, old promo posters from past games, and icons that you can use for your KOF online avatars. While there's nothing that can be used for an actual fight, the tidbits you discover are quite worth checking out.

With a plethora of characters, team combinations, stages, and modes to dive into, The King of Fighters XIV is chock-filled with just about everything a fighting game lover could ask for. One of the most gorgeous brawlers to currently grace a PS4, SNK has brought its signature series to top form with its latest entry. Take note, Capcom: this is how you honor a fighting legacy, one that pays tribute to the series itself and the fans that have adored it.

In Renoir, you get to solve your o...