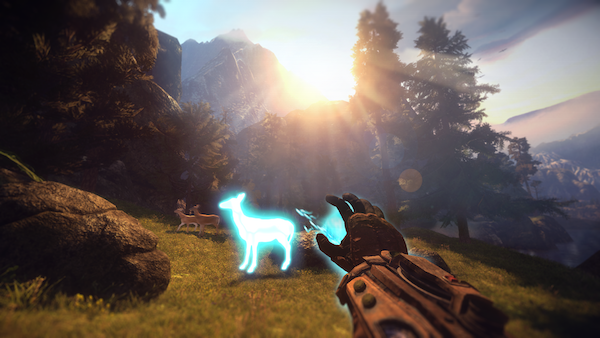 GAME REVIEW | Running and Jumping Through the 'Valley'

Prior to playing Valley, my only exposure to the developer Blue Isle Studios was their take on the Slender Man with Slender: The Arrival. While certain parts of that game were scary, it really did more to fuel my imagination as to what this team could accomplish with a brand new idea. Answering my question in spades, Valley is an interesting and unique first-person experience that puts you in control of an explorer searching for an ancient and powerful item called the Life Seed. While the story is mildly interesting, what separates Valley from other games are the interesting twists they put on the first-person exploration genre.

Starting out your journey in Valley feels much like many games before it, including Slender: The Arrival, as you begin to slowly explore the world they've created. This feeling sticks around right up until you stumble across the element that changes everything: the L.E.A.F. Suit. Strapping into this exoskeleton device completely alters the pace of the game, suddenly allowing you to run, jump, explore and even interact with the world around you in more powerful ways. Throughout the game, you'll find even more upgrades that change the game in meaningful ways as well, keeping the experience feeling fresh throughout.

The easiest thing to do in any game is to take an introduced game mechanic for granted. Valley has masterfully eliminated this concept by making sure that before you obtain any upgrades, you know what it's like to explore the world without them. Since a few of these were a surprise, I won't go over everything, but it's a technique they used often and to great effect. Early on, movement is slow and steady, not in an overly negative way, but it takes some time to get places. Once you first discover the L.E.A.F. Suit, the amount of freedom that running and jumping suddenly allows feels freeing in a way that is hard to achieve in any other way. Even with these abilities, you're tasked with finding creative ways to get to the top of some areas and then eventually earn the ability to climb some walls quickly and easily. Knowing how difficult it was earlier makes you feel like a superhero when you get the ability to circumvent those sections.

All of that being said, not every new ability was a standout hit for me. There is a grappling hook ability that, while it sounds great on paper, never quite felt good to me. More times than I would like, I ended up splashing down into the water because I botched the momentum you're supposed to gain with the hook. I also constantly messed up by not holding down the button associated with shooting it out. A certain amount of this is on me and my brain not processing these inputs properly, but I always groaned a bit on the inside when a grapple-heavy section came around. 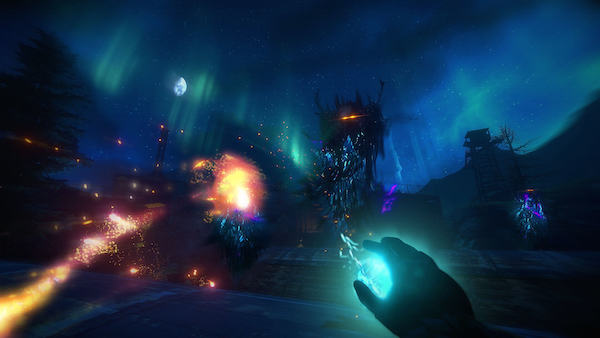 Combat in any game can often be the thing that makes or breaks the experience. In a first-person exploration game like Valley, it could easily have been the thing that broke up the experience in a negative way. Thankfully, they ease you into the system with the L.E.A.F. Suit's ability to give and take life. In short, you can press R1 to take life from any living thing and R2 to give it back to anything dead. This is sort of like your health bar as the valley dies a little each time you perish. You can then use your ability to bring trees and animals back to life to replenish the health of the valley and its ability to bring you back. Eventually, enemies will start to attack you and the only way to pacify them is with the give life function of the suit. It's not the best combat system I've ever used, but it intrudes minimally on the main game and never feels like a pain.

Replayability is often the weak side of games like Valley, but it does offer some options in the way of collectibles to have you go back through the adventure. Thankfully, the collectibles are not notes and audio logs, but items that actually unlock improvements for your L.E.A.F. Suit including extra energy and parts. This adds more incentive than is normally present for story-based unlockables, but the game never really felt difficult enough for the improved parts to be necessary, so that killed a bit of my momentum right there. Still, I'm glad they put in the effort to make the collectibles meaningful and I certainly attempted to collect as much as I could on my first play-through. 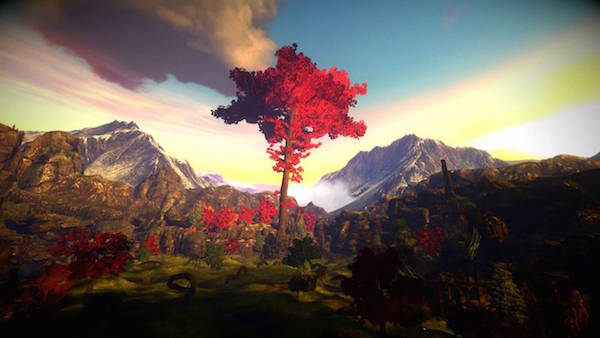 Valley is one of those rare games that just kept surprising me as it went forward. It's not perfect, by any means, but it managed to get enough right that I ended up enjoying the majority of the experience. Too often games will just throw abilities at you before you can fully appreciate what the game is like without them. When it's done right, like it is in Valley, this can lead to elating moments that make the whole game so much more enjoyable. Valley is available now for the PS4, Xbox One and PC.