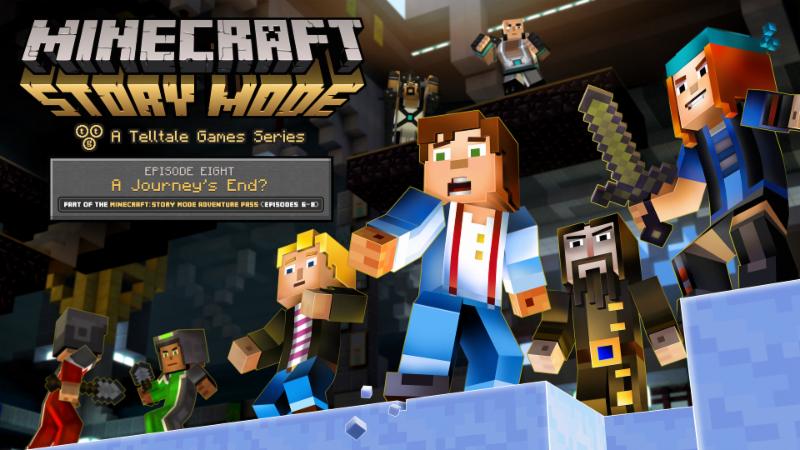 It's been nearly a year since Telltale Games introduced us to Jesse, Petra, and the rest of the Order of the Stone in their take of the Minecraft world. We have seen a great mixture of highs and lows within its series, with the first five episodes adding not much new to the point-and-click adventure genre. It was a bold move for them to expand the story with its three-episode Adventure Pass, and it's fortunate that it succeeded in making Minecraft: Story Mode a better experience overall.

With its (possibly) final episode "A Journey's End?" in place, it's safe to assume that Telltale wanted to do all it could to make sure the fans got what they were clamoring for. Jesse and the rest of the gang are literally dropped into a battle, where the winner of the games can go home as the rest are sent to the Nether Mines. Running the games are the Old Builders Hadrian, Mevia, and Otto, who aren't as friendly as Harper. As the games go on and more people get eliminated, Jesse soon discovers that the Old Builders are hiding something in regards to the players' beacon of hope. 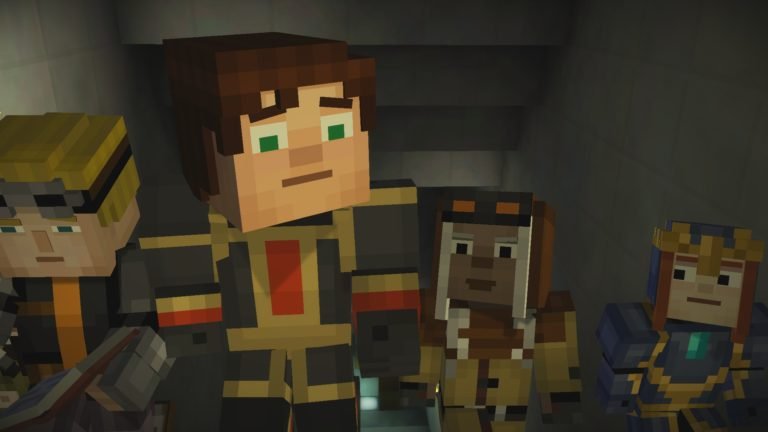 Perhaps what made "A Journey's End?" a far better episode than in the past was the fact that a great chunk of the game was action-oriented. Yes, there's the usual chatting with villagers and tough guys to see what was going on, but when the games aspect of the story kicked in, I'll admit that there were moments when I was at the edge of my seat. Dare I say, there were some pretty good unpredictable scenarios that had me wondering if I was making the right moves and choices.

The addition of voice actor veteran Jim Cummings as Hadrian and anime voice actress extraordinaire Kari Wahlgren as Mevia proved to be what helped push this finale to be all the more memorable. While there have been a good dose of villains in Minecraft: Story Mode, none could light a candle to what these two were able to deliver both in performance and presence. Their actions and intentions made you think that there was no hope for the Order of the Stone this time around, bringing back memories of what occurred during the first season of Telltale's Game of Thrones adaptation. 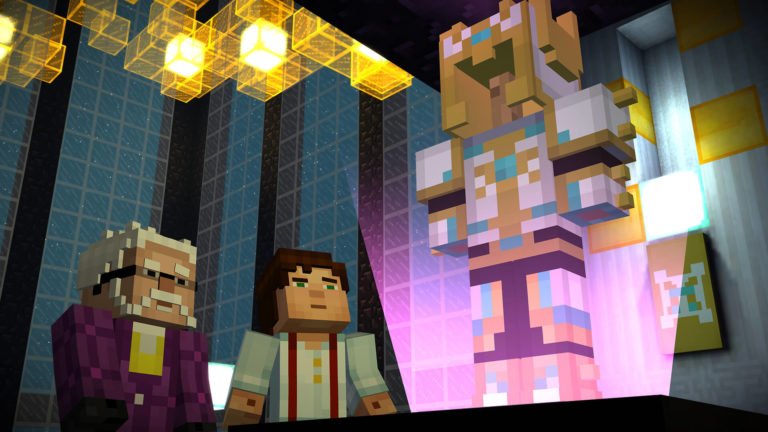 Seeing the entirety of the new Order of the Stone made "A Journey's End?" feel like a good wrap-up to this season/series. In actuality, it helped to push the lesson in that not just one person can take on the harrowing tasks the world tosses their way. With a good gang of friends behind you at every step, the problems of the universe can easily be conquered. This is why I feel Minecraft: Story Mode can be used as a great teaching tool to the younger gamers out there, as it can show them the joys of problem-solving as a team rather than by one's self.

Of course, not everything about "A Journey's End?" was perfect. Like clockwork, I noticed some minor glitches during my play-through, especially when some characters' heads would vanish for a couple seconds before reappearing. Then there were times where the voice-syncing was off, to the point where talking characters' mouths weren't even flapping. You would think by now that -- after all these years in the development business -- that Telltale Games would've found a solution to these problems. Alas, it seems these graphical hiccups are still on their to-do list. 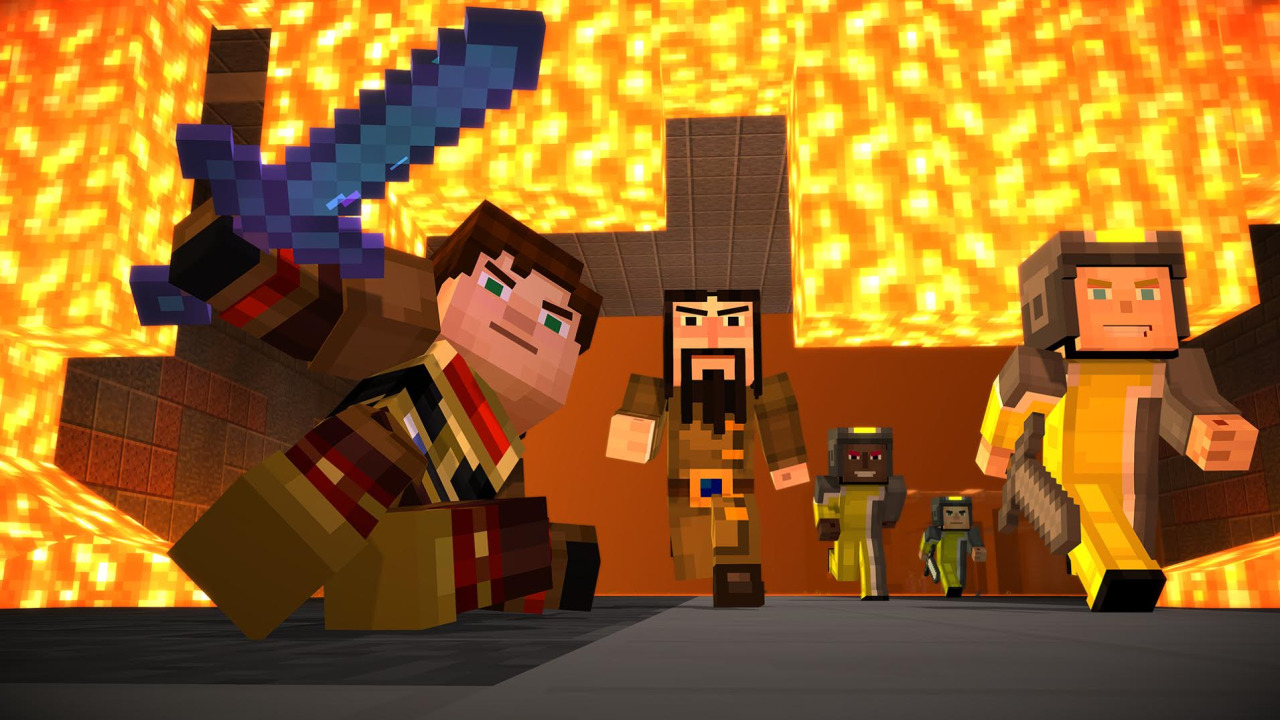 Minecraft: Story Mode wasn't the best thing Telltale Games has ever done. It had its fair share of slip-ups and a few other storytelling aspects that made the game less memorable than their past series. Hell, I'll even admit that making Episode Two one that forced players to replay entire aspects of the game was a big blunder, as they could've easily made it so you could see both sides of the mission occur in one play-through.

However, the Adventure Pass saved this series from being drowned out by the likes of Tales From the Borderlands, The Walking Dead, and Sam & Max. The warmth and creativity of the Minecraft world that was lacking in the main storyline finally peered their heads, and presented itself with some of the game's most memorable moments. Needless to say, had it not been for these three added episodes, Minecraft: Story Mode would've turned off newcomers to the popular franchise.

"A Journey's End?" is a well-rounded conclusion for this mighty adventure of Jesse and the Order of the Stone. While the series had its stumbles, these bonus episodes helped to pick itself up and bring it on home with head held high. Minecraft: Story Mode may not have been Telltale's finest achievement, but it would actually be disappointing if we didn't see these lovable characters return in some way. In short: this reviewer is willing to build and craft away until another fun adventure comes a-crawling.

Promotional consideration made by Telltale Games and Kim Manuel of Sandbox Strategies. Reviewed on the Xbox One.