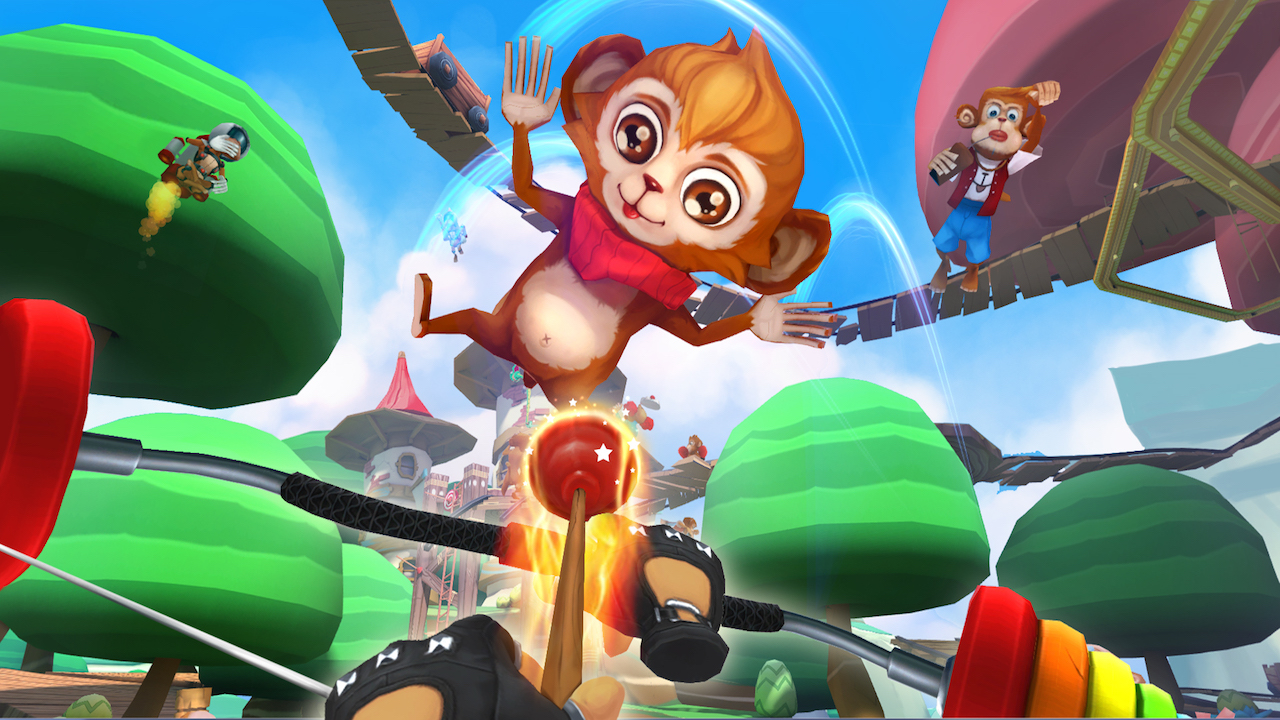 According to every religious scripture out there, monkeys should always be considered entertaining. Whether it's watching a classic film like Every Which Way But Loose or playing a game series in the vein of Ape Escape, our hairy cousins in the species bracket have been a staple of humor or smiles. So when Oasis Games announced that one of their first PlayStation VR titles would have players shooting monkeys with a bow-and-arrow, I got giddy. Alas, upon playing their launch title Ace Banana, that giddiness quickly transformed into frustration.

Developed by TVR, Ace Banana is a first-person shooter where you must protect your bananas from invading monkeys. As you defeat more monkeys, special weapons and powers will be unlocked in order to defeat more of these menacing apes. However, the longer the wave goes on, the more challenging the crazy chimps get, leading towards an even tougher boss battle. 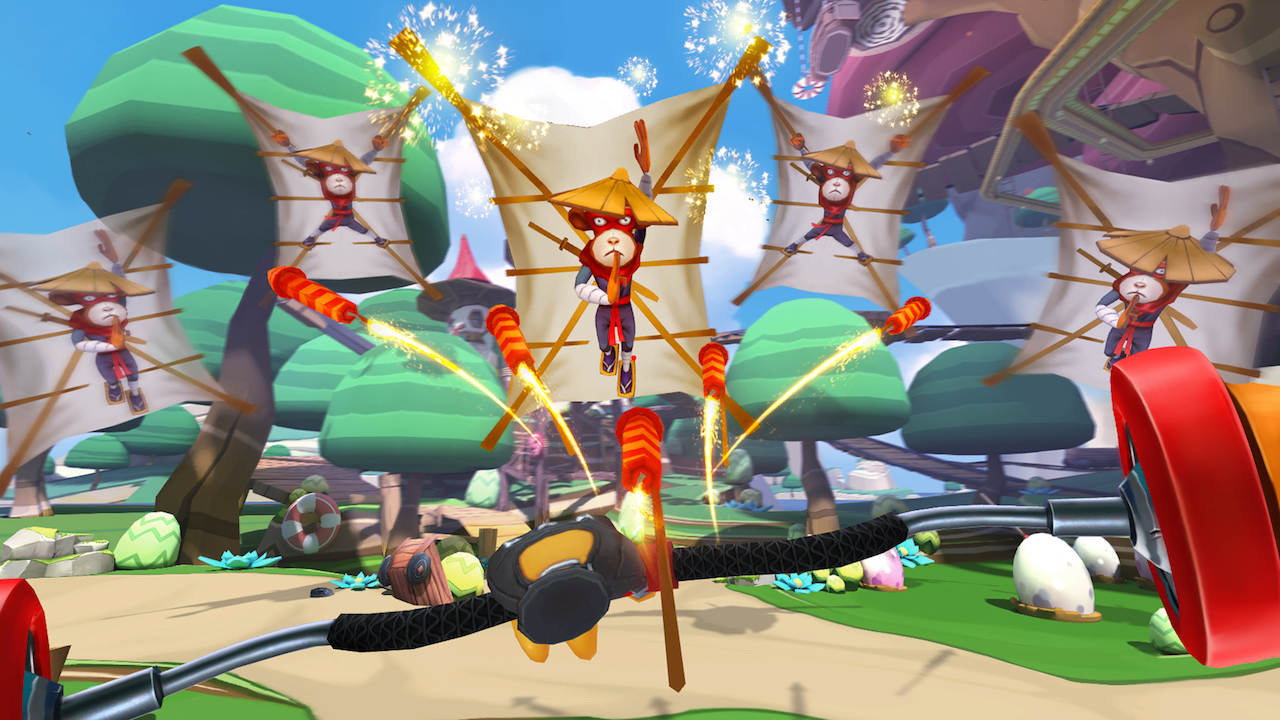 First things first, the overall look of Ace Banana is quite charming. Never taking itself seriously, the game is filled with zany action and some of the goofiest apes you'll come across in recent gaming history. Even as the monkeys become more difficult to handle -- such as with speed and blocking -- they're always presented in a very silly manner. I'll admit that I got a good chuckle from the Hawaiian-shirted and clown monkeys that came hurtling toward my banana horde, even if it somewhat distracted me from doing my task.

This leads to one of the biggest gripes I have with the game: the control scheme. Playing with two PlayStation Move controllers, it has you use your left hand to hold the bow & aim and the right to pull the string & fire your arrows toward your enemies. When there aren't a lot of monkeys to deal with, the controls act fine. However, it's when the waves become a little crowded when things start getting wonky. 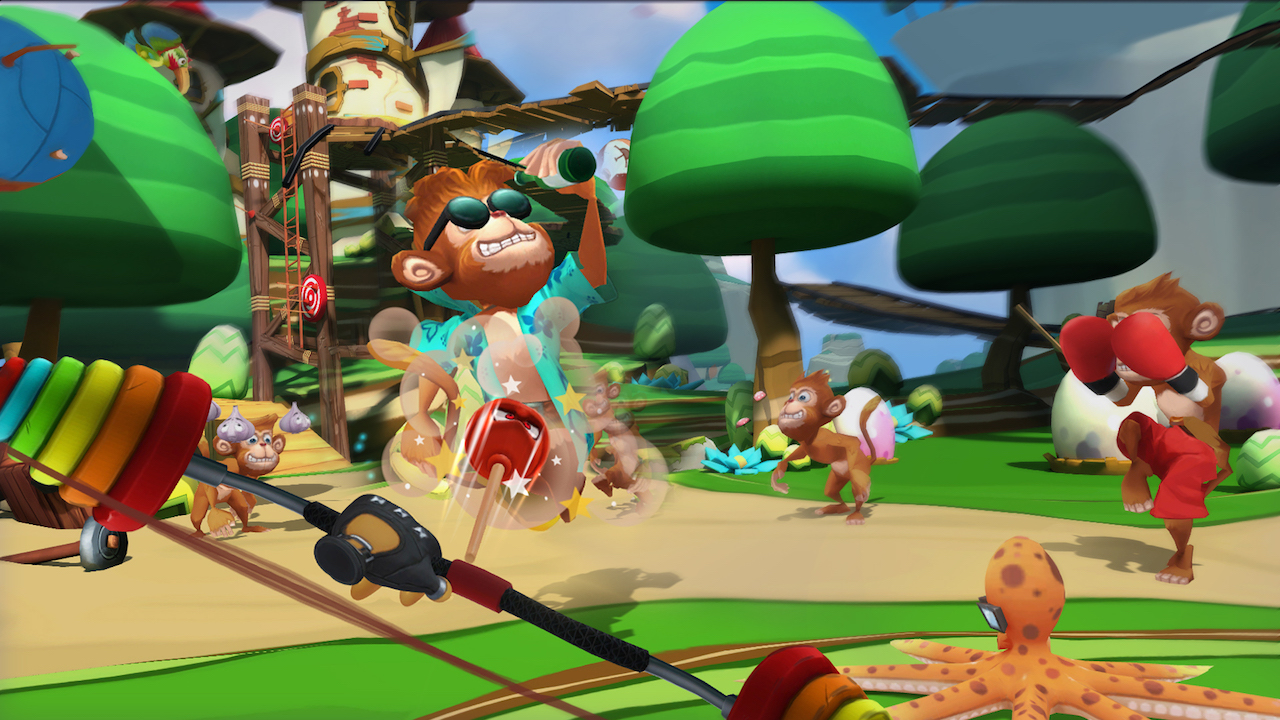 Many times during my play-throughs, my controllers refused to respond to my movements, resulting in my peripheral vision being forced to watch my bow and arm become entangled in a buggy mess. Whenever times called for quick, evasive movements, my virtual arms couldn't seem to catch up to where my real arms were positioned. Because of this, my banana horde kept getting lower due to me being unable to aim and shoot at these damn dirty apes!

It got worse when a boss battle occurred, as I had to jump from banana stash to banana stash to keep the towering monkey-controlled robot from stealing everything. This led to more bugginess, including the game's total refusal to aim properly at the robot's weak spots. When I was greeted with a Game Over screen, I then discovered that there were no checkpoints in Ace Banana. That means once you lose, you're forced to start at the very beginning without anything you had earned previously. 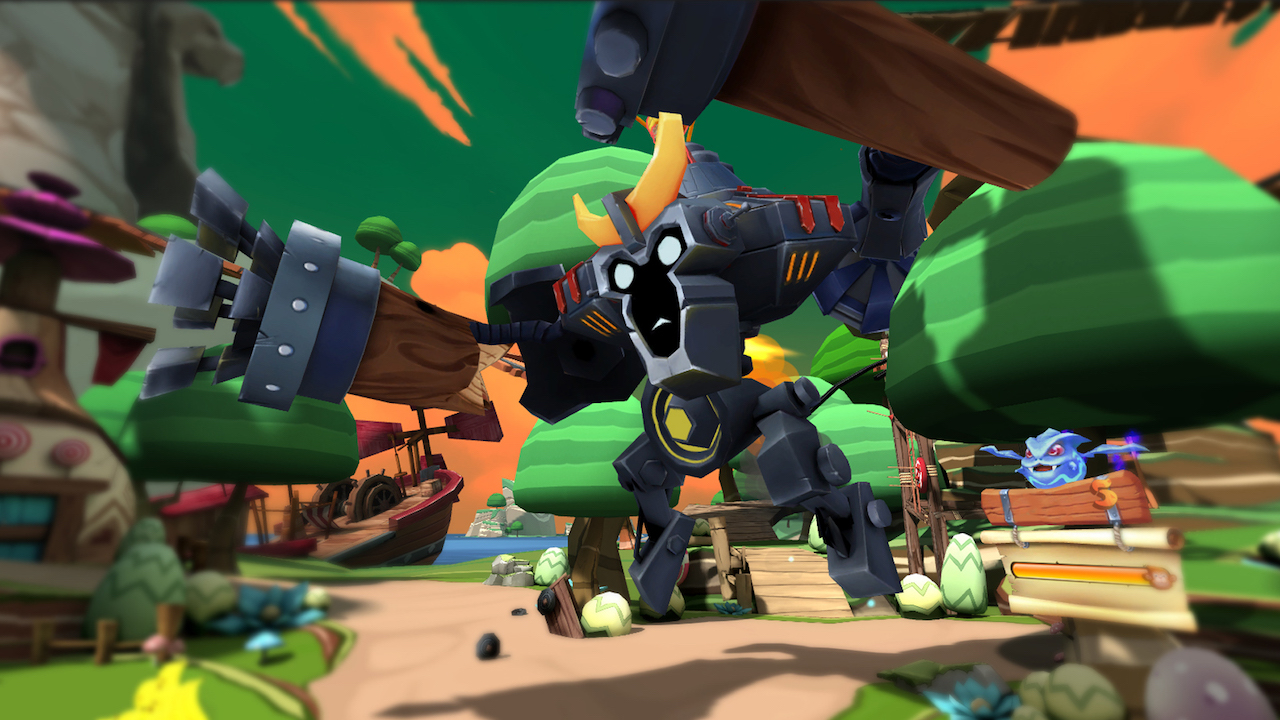 You quickly realize that there seems to be signs that the game was rushed to make the PlayStation VR launch date. There are many typographical and grammatical errors in its English-translated script, showcasing a lack of professionalism in whoever was in charge of its US/UK release. While this can easily be overlooked by younger gamers, the older crowd that the PSVR was built for will no doubt scoff at these blunders with annoyance. (After all, the PSVR loves to remind its user that no one under 12 should be using it, meaning that the headset's demographic might pass on this just from the translation problems alone.)

Ace Banana could've been a better launch title if more grease and polish were placed in its controls. Sadly, what has been brought to the table is nothing more than a immersive mess rather than a goofy good time with virtual apes. Ace Banana is one virtual reality experience you shouldn't get your stinkin' paws all over.

Promotional consideration made by Sonia Im of ONE PR Studio

GAME REVIEW | Three is the Jackbox...