Revolutionizing local multiplayer by allowing smartphones to be used as controllers, The Jackbox Party Pack has been a staple for nearly every party I've thrown since it came out. None of the collections had been perfect yet though, as there were always a few duds in each pack. Sporting the best selection of games yet, The Jackbox Party Pack 3 is now available and might just be the selection I boot up here on out whenever I have folks over. Sporting four brand new games alongside my personal favorite returning game, let's break each of them down one by one in no particular order. 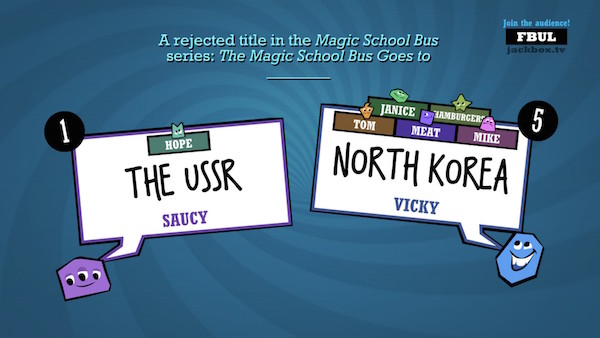 Starting up with the returning game, Quiplash has always been one of my favorite games in the series. Goofing off with your friends and coming up with funny things to say is the crux of this game. Quiplash 2 throws in the added wrinkle of allowing you to create your own prompts, a feature previously seen in Drawful 2. This feature works a whole lot better as a part of Quiplash 2 however, as knowing what the prompts can be doesn't break the game like it does with Drawful. I managed to throw together a custom list for my group of friends I pay with and it was a huge hit that did not feel tilted in my favor.

The biggest problem with the original Quiplash was the final round of each game. The Last Lash, as it is called, allows everyone to write an answer for the same prompt and awards points based on votes. The main issue there was that the amount of points awarded weren't large enough to influence the scores in a meaningful way. Thankfully, in addition to adding tiers to the voting system, the points have been increased to allow the chance for someone to come from behind in that last round. When the night is coming to a close, my group almost always settles in to multiple rounds of Quiplash, so it's great to see it improved with this sequel. 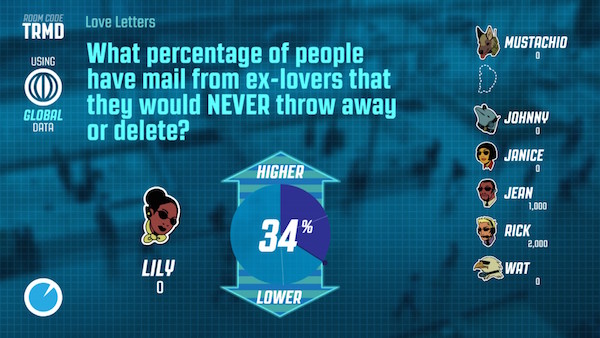 Taking results from online surveys they performed, Jackbox Games created a deceptively difficult, for me anyway, guessing game with Guesspionage. In this entry, the game feeds you a factoid and you need to guess the percentage of people that it pertains to. For instance, it might say something like a certain amount of people prefer creamy over crunchy peanut butter and it's your job to determine the percentage. The remainder of the players then guess whether the real answer is higher or lower than the main player's guess. This is deceptively difficult as you score points based on how close you get and you need to be within 30% to score at all.

Screams of surprise roared through my home every time someone would guess the exact number, a three-time occurrence for my spouse, which was a lot of fun. Allowing for a slightly lower-pressure situation, this game is a ton of fun and perfect to start the night. Each player also gets to select their own avatar for this one, which always adds that extra bit of roleplaying into the mix. The writing, as usual, is spot on and hilarious in this game particularly as they have both written and voiced jokes throughout. 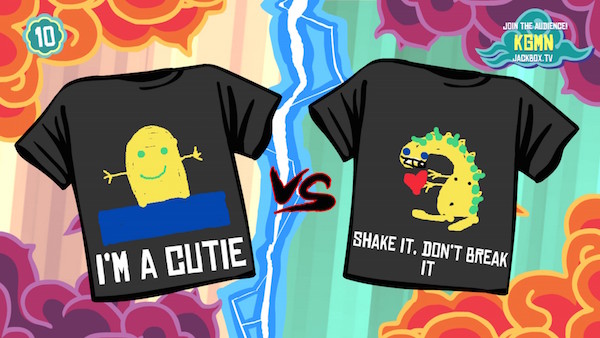 It seems that there can never be a perfect collection as The Jackbox Party Pack 3 does have one game I'm not crazy about. Tee K.O. is a game about designing shirts and then picking the best among the group. The issue here is the work up front that is required before what feels like the actual game can begin. It requires you to do several drawings right up front and even though I'm a relatively creative person, I have to admit that it was hard. After that, they ask you to come up with a bunch of slogans as well. Only after this do you get to pair the two groups together and pick the best ones.

Drawing games can be really hit or miss and it is my firm belief that they have created one great example of this: Drawful. Since Tee K.O. would not stand well enough on its own, I can certainly understand the move to include it instead of Drawful 2 in this collection. I have to say though, that this would be a perfect pack had they chosen the latter as the inclusion instead. It's not a terrible game, but Tee K.O. just felt a bit too cumbersome to be a fun party game that people will demand to play. 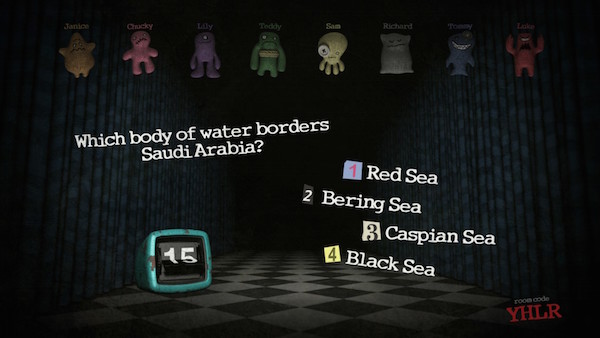 Right in time for Halloween, The Jackbox Party Pack 3 finally introduces a somewhat spooky game with Trivia Murder Party. Themed around the players being kidnapped by a killer, they are tasked with surviving a grueling game of survival by answering trivia questions. If you miss one of them, you get sent to the killing floor, where you have one last chance to save your skin in one of a bunch of varied mini-games. Once all but one players are dead, the remaining person attempts to escape, but can be thwarted by the ghosts of their deceased friends. One surprising thing about this game is also that it can be play alone. It's obviously best played in a group, but it never hurts to have at least one game to play by your lonesome.

As a huge horror fan, I was thrilled by the inclusion of this game. Trivia Murder Party seems pretty simple on the surface, but there are a number of elements to deal with throughout. One of the mini-games involves cutting off a finger, in the game of course, but the trick is that you can no longer pick the answer associated with the position of your lost digit. Other killing floor games can pit players against each other, like one where a selection of goblets are poisoned by the players that answered the trivia question correctly. This game is a bit more intense, but it's a ton of fun to laugh at others misfortune and help them on their way to demise. 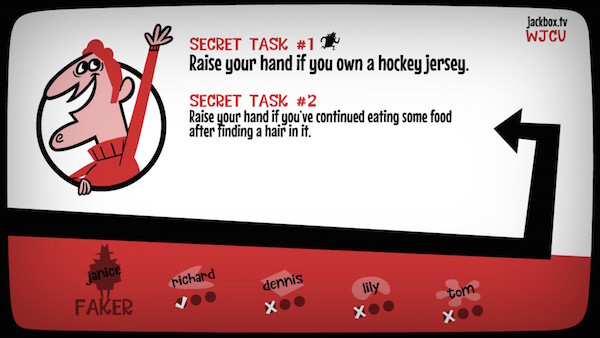 Last up is my favorite of the new games that, funnily enough, very strongly resembles one of my favorite tabletop games. Fakin' It involves asking all but one players a secret question and tasking everyone with figuring out who didn't know what the question was. Answering it might involve raising your hand, pointing, holding up a number or even making a face. The trick is that the person without the prompt knows what to do, but not what is being asked. This leads to some hilarious moments when people accidentally imply that they've had a finger up their butt or that they only shower once per week.

This game clear has more pressure attached to it than any of the others included in The Jackbox Party Pack 3. It is nerve-wracking to be the faker and sometimes it's just not possible to bluff your way out of a bungled lie. Still, this might be my favorite of the new games, because it takes the whole concept further by taking the focus off the TV and back onto your friends. Interacting with people, and even learning some new things, this game had the most laughs out of anything else played. The concept is very similar to one of my favorite tabletop games, Spyfall, which is a ton of fun and also involves all but one player having information. I recommend both games to anyone that has yet to play them, but know going in that the pressure of being the faker is high and not for the faint of heart.

Though there isn't still a flawless entry in the series, The Jackbox Party Pack 3 is certainly as close as it has come. Four brand new games, three of which are excellent new entries, take center stage. This is all the more impressive since Quiplash 2 could easily have overshadowed the newer games and would have been all you'd need for a good time. After their third entry, it would be easy to assume that Jackbox Games would be phoning it in by now, but they are stronger than ever. Check out this awesome collection of games now in The Jackbox Party Pack 3 for PC, Mac, PS4 and Xbox One.