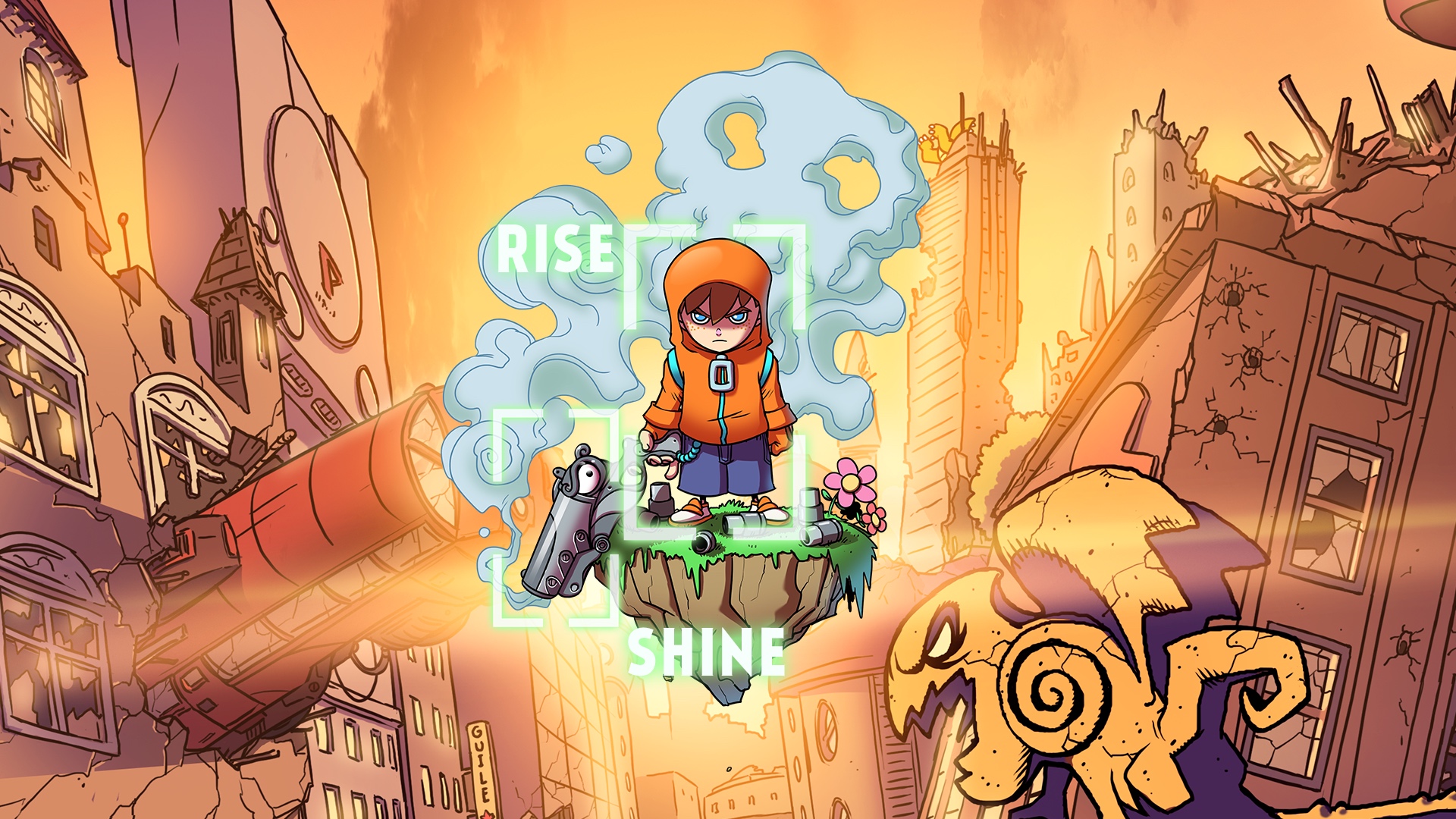 Imagine if Wreck-It Ralph was directed by Stanley Kubrick. Instead of a happy-go-lucky adventure filled with some dark undertones, you're treated to a violent in-your-face bloodbath with even darker metaphors. That's exactly what Super Awesome Hyper Dimensional Mega Team (or SAHDMT, as I'll refer to them as throughout the rest of the article) has done with their third game Rise & Shine, which is being published by [adult swim games].

Taking place in the realm of video games known as Gamearth, Rise & Shine puts you smack dab in the midst of a gory war against the space grunts of Nexgen. After watching a beloved hero die in the worst kind of way, the young Rise is gifted with a sacred gun named Shine. With the heavy responsibility of wielding a legendary weapon, Rise realizes that he is the only one capable of stopping the forces of Nexgen, whether or not he believes he can do it. 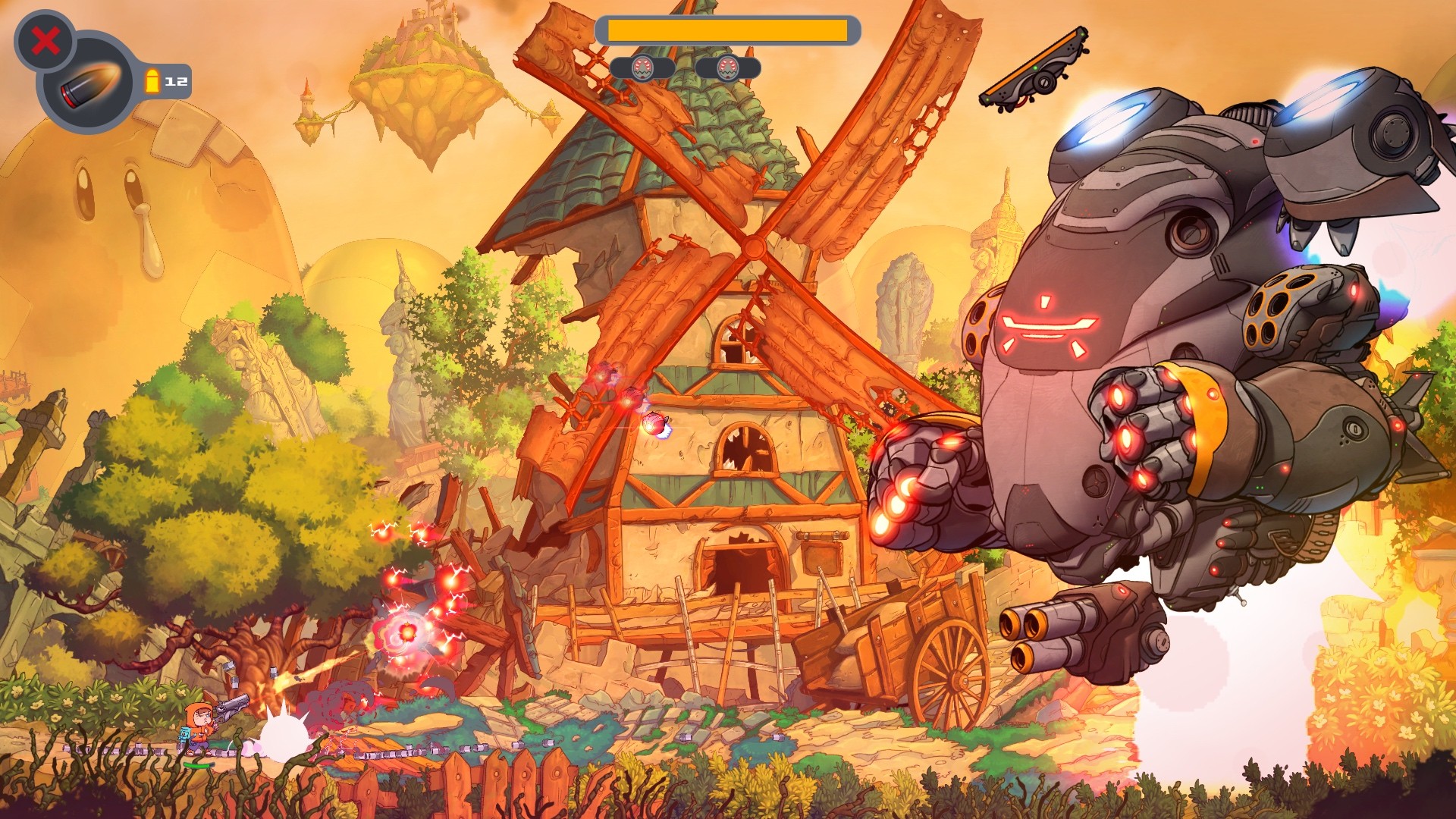 As you play, Shine can be upgraded with new kinds of bullets and shooting styles, from remote-controlled bullets to explosive lasers. The deeper you go, the tougher the threat becomes, as you face off against the likes of zombies, robots, grunts, and even cannibalistic "not Goombas." From start-to-finish, your journey will be tough as nails, as you undercover secret traps and experience the worst kind of deaths a child can face off. (If you thought watching Clementine fend for herself in Telltale's The Walking Dead was hard, you haven't seen nothing yet.)

Rise & Shine can get disturbingly gory, despite its cartoonish looks. You'll bear witness to Rise being shot, decapitated, blown up, squashed, and having his face ripped off in the most detailed of ways. Even if you know he's just gonna respawn to the previous checkpoint, it's still somewhat disturbing to see. Okay, it's a little humorous, but it's messed up nonetheless. 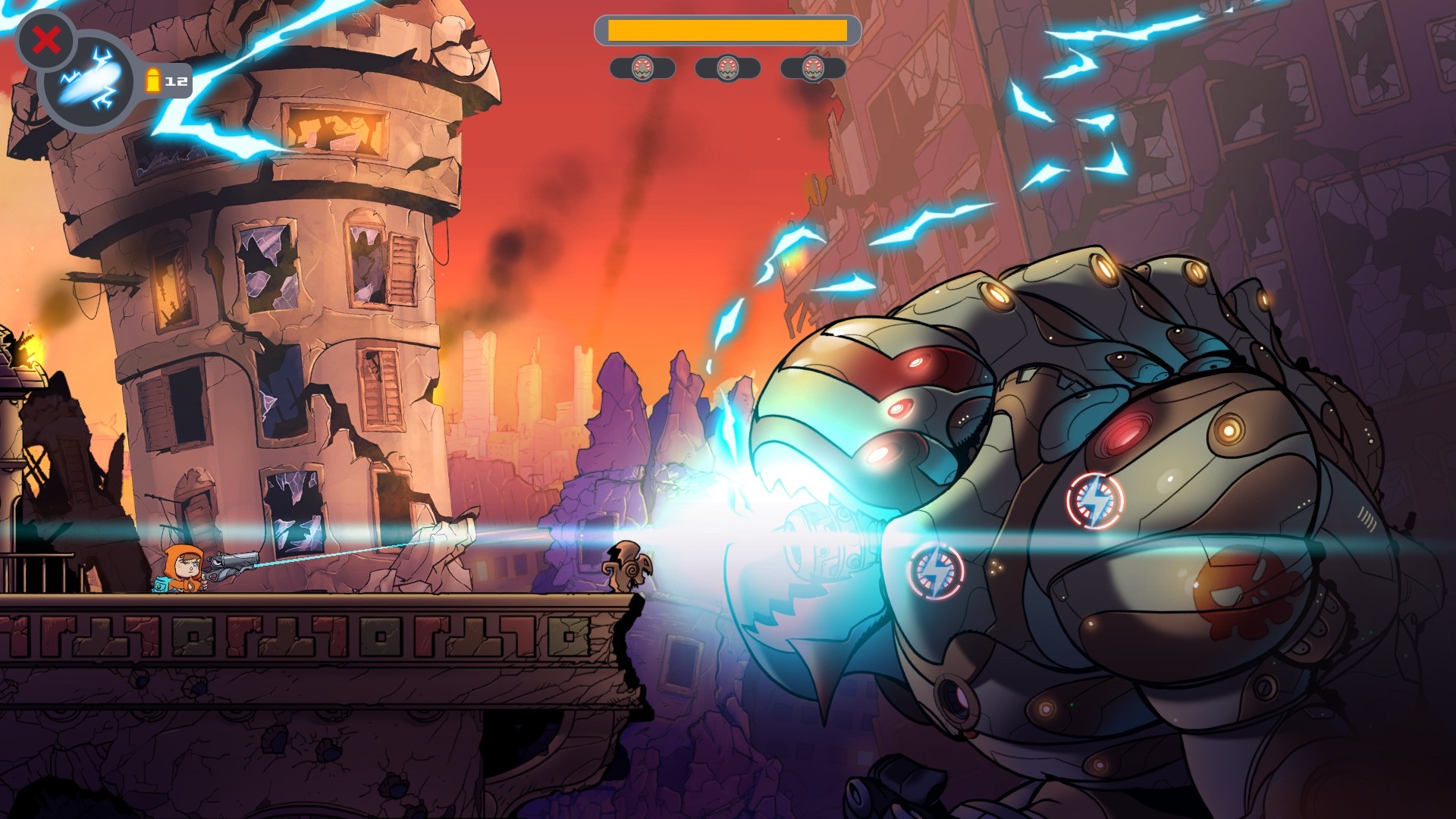 And yet, SAHDMT's concoction is still a beautiful love letter to video games of yesteryear. One look at the side-scrolling world, and you'll be sure to point out homages to Mario, Zelda, Ghosts 'n Goblins, and Contra. (There's even a scene that shows a rattled toadstool kingdom with hanging corpses and a dead plumber at the king's throne.) Every speck of detail in this game is presented in some of the most gorgeous cel-shaded animation, with its story told in a wondrous comic book fashion.

Like the games of the past, Rise & Shine is all about the hardcore difficulty. On occasion, it takes a couple shots to kill Rise, and with enemies at just about every corner of the screen, staying alive is easier said than done. There will be sections of the game where you'll find yourself stuck for at least half an hour as you keep on shooting and dying over and over again. Often the urge to rage-quit attempted to overtake me, but trust me when I say that soldiering through this difficult journey is truly worth it. 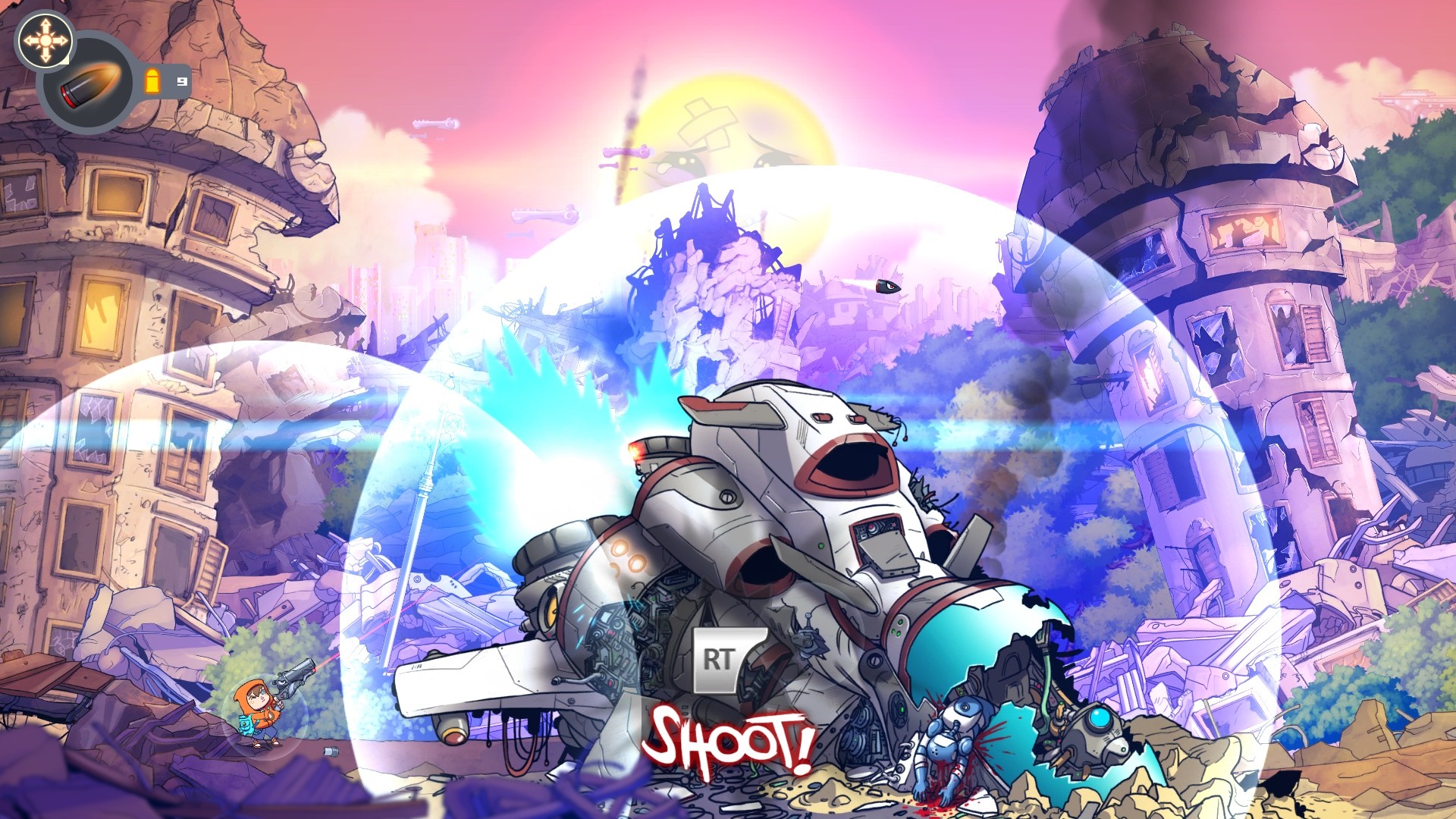 As the game has you often thinking on your feet, controlling the game can be a little tough at times. There were moments where I accidentally pressed the bullet-switch button with the bullet-style button, resulting in my death near the end of a harsh battle. Aiming can be a little sensitive, so if it's not to your liking you can easily set it up so it feels most comfortable to you. However, for the most part, playing on an Xbox One controller gives your movement a more natural feel to it, especially when it comes time to solve puzzles and take on boss battles.

Rise & Shine will take you roughly five hours to beat, depending on your run & gun skills. While there are no actual extras to discover throughout the game, this is the type of title where there's a challenge awaiting you to defeat the game in the quickest time possible. Those who wish to attempt to speedrun it will find themselves probably completing the game in under two hours.

Rise & Shine is an unapologetic hardcore run & gun adventure that beckons to side-scrolling gaming classics. With its gorgeous visuals and challenging gameplay, SAHDMT's latest title is already an early contender for one of this year's best. Crack your knuckles, loosen your trigger fingers, and prepare yourself to experience one of the toughest battles you'll partake in the side-scrolling realm.

Promotional consideration provided by Evolve PR and [adult swim games]. Reviewed on the Xbox One.