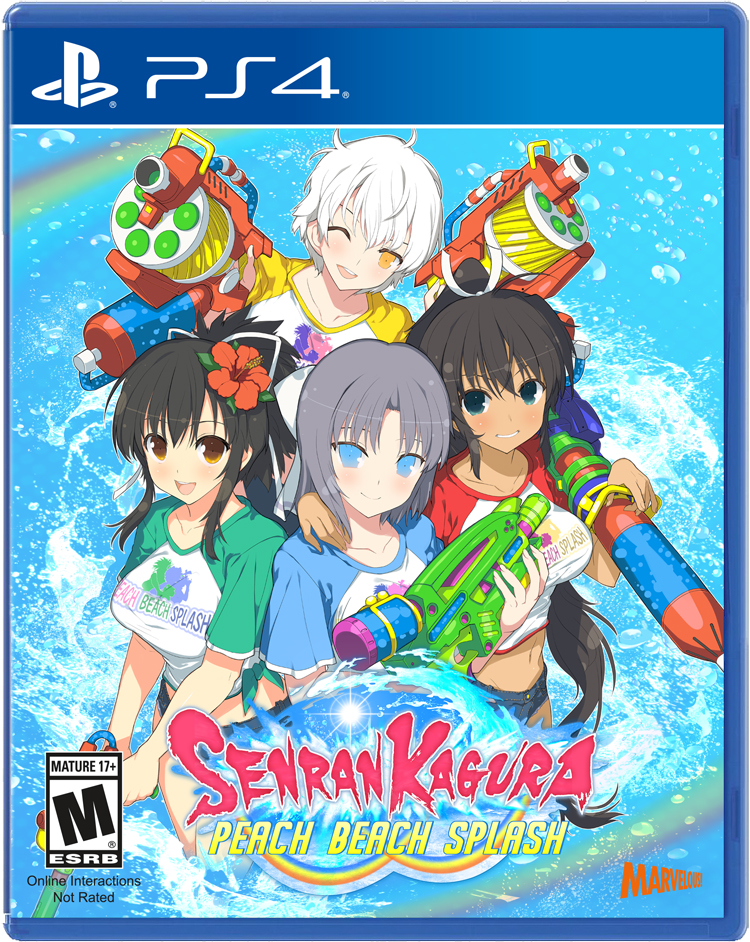 I remember when Splatoon first came out, and some of the more "hardcore" gamers were whining about its kiddy nature. To those complainers, I say there is no need to fret any longer. Thanks to the powers that be, the kill-free wet shooter fun times have finally crossed over to the M-rated realm thanks to the shinobi stars of the Senran Kagura series. Turning in their blades for squirt guns, the ladies of Hanzō, Gessan, Hebijo, and the Homura Crimson Squad go big or get wet in their latest adventure Senran Kagura: Peach Beach Splash.

Some may scoff at the idea of a critic taking a series like Senran Kagura seriously. Yes, it's got loads of fan-service and may make certain demographics roll their eyes with disgust over its content. What they're missing is the fact that this is all for the sake of being funny, with the characters all in on the joke and them never being shown in a uncomfortable light. Not to mention that it has done various styles of gameplay mechanics very well, from the hack-and-slash and Musou-styled beat-em-ups to even cooking-based rhythm games. So naturally Senran Kagura would have to try its hand at the third-person shooter genre, with Peach Beach Splash surprisingly doing a great job with its gameplay mechanics. 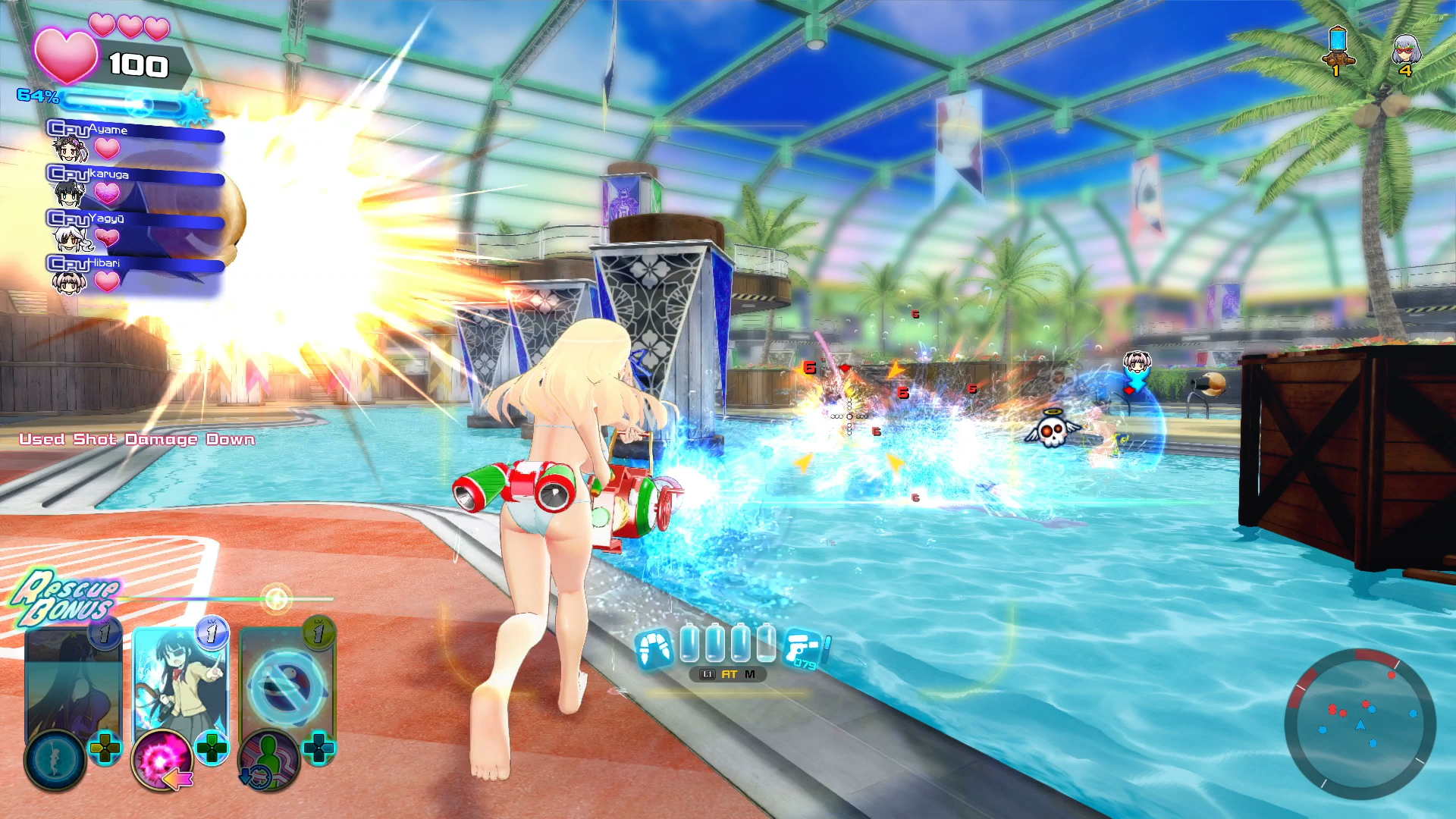 As the story goes in Peach Beach Splash, a ninja-based water gun tournament is being held, with the ladies of the Senran Kagura universe being brought over to fight in the game. The winner of the tournament gets their wish granted, which gives the female shinobi all the more reason to dive into the splashy madness at hand. As the tournament continues, a mysterious force behind-the-scenes starts preparations for the ultimate kind of paradise.

The main game is set up with four ten-chapter story modes, with a final story mode unlocked once those four are completed. As you play through the rounds, players will be able to collect nearly 800 attribute cards that can help hone skills and unlock pet helpers to use in matches. Duplicate cards are automatically transferred into points that can upgrade characters, weapons, and the cards themselves in order to better yourself on the battlefield. Once you find that right combination of weapon, card, and that best girl character of your choice, then you can let all Hell break loose via a tidal wave of pain and adrenaline. 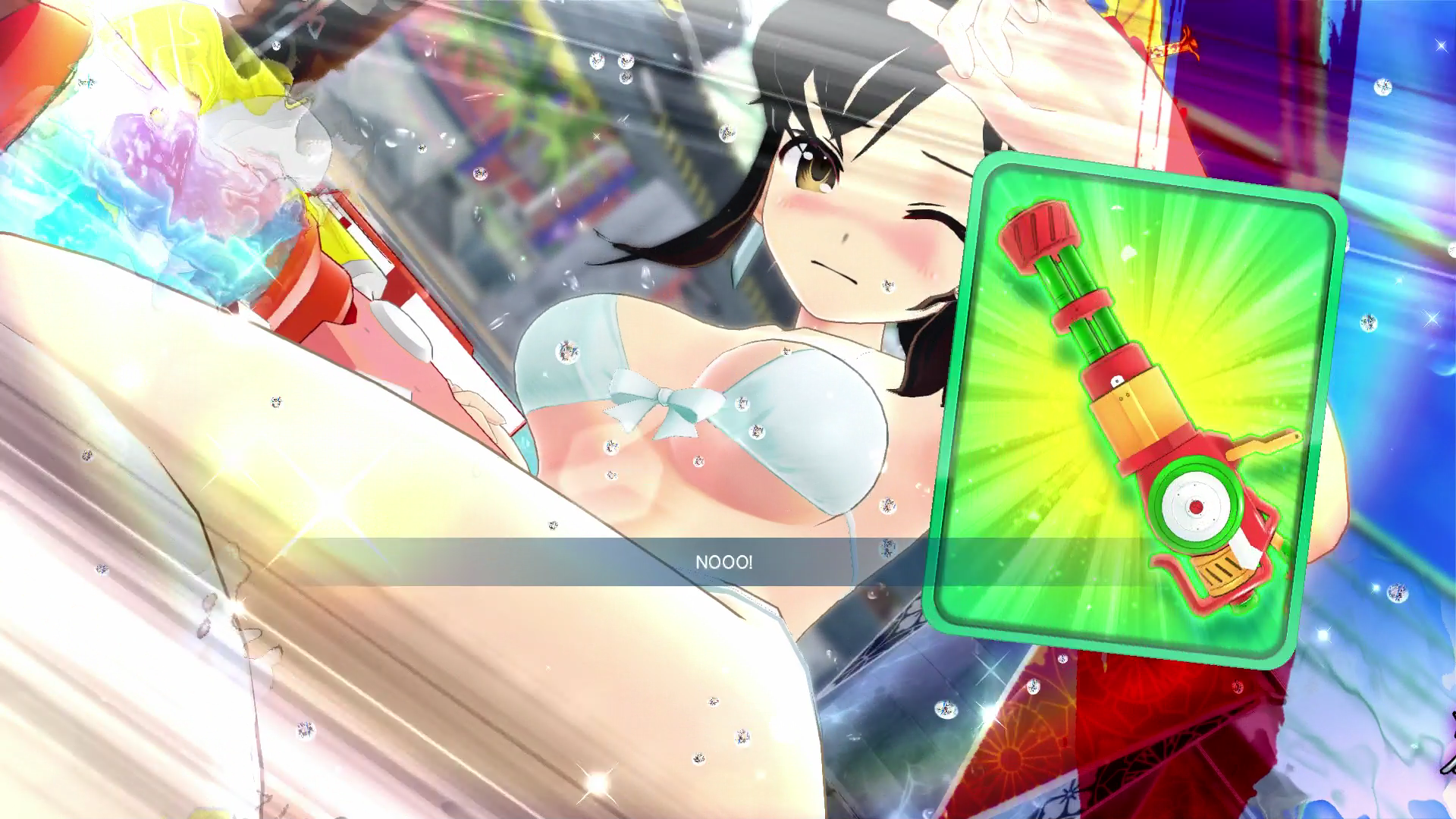 While I've been a fan of Senran Kagura for a few years, I was taken by surprise by how slick and smooth the gameplay was throughout Peach Beach Splash. Aiming -- be it manual or auto -- was handled with care, with there being no sign of sluggish mechanics in the controls. Even though it doesn't go 60 frames per second throughout its entire run, I only saw the action slow down only a tiny bit when there was too much going on in one screen. Never once did I have to adjust the controls, nor did I ever find myself lost in a confusing mess of a battle like even Splatoon does to me from time-to-time. In laymen's terms: this is one of the better third-person-shooter experiences you'll find in gaming this year.

Depending on your shooter style, there will be a gun that'll fit with how you play. Whether it's pistols, shotguns, heavies, or even bazookas, there's a weapon that you'll more than likely find most computable throughout your experience. Get enough hits, and you'll find yourself unleashing a special melee mode that'll blast away your enemies to kingdom come! Believe me when I say this melee comes very handy when surrounded by multiple foes, especially during the most perverted (and toughest) boss battle you'll ever face in a game like this! 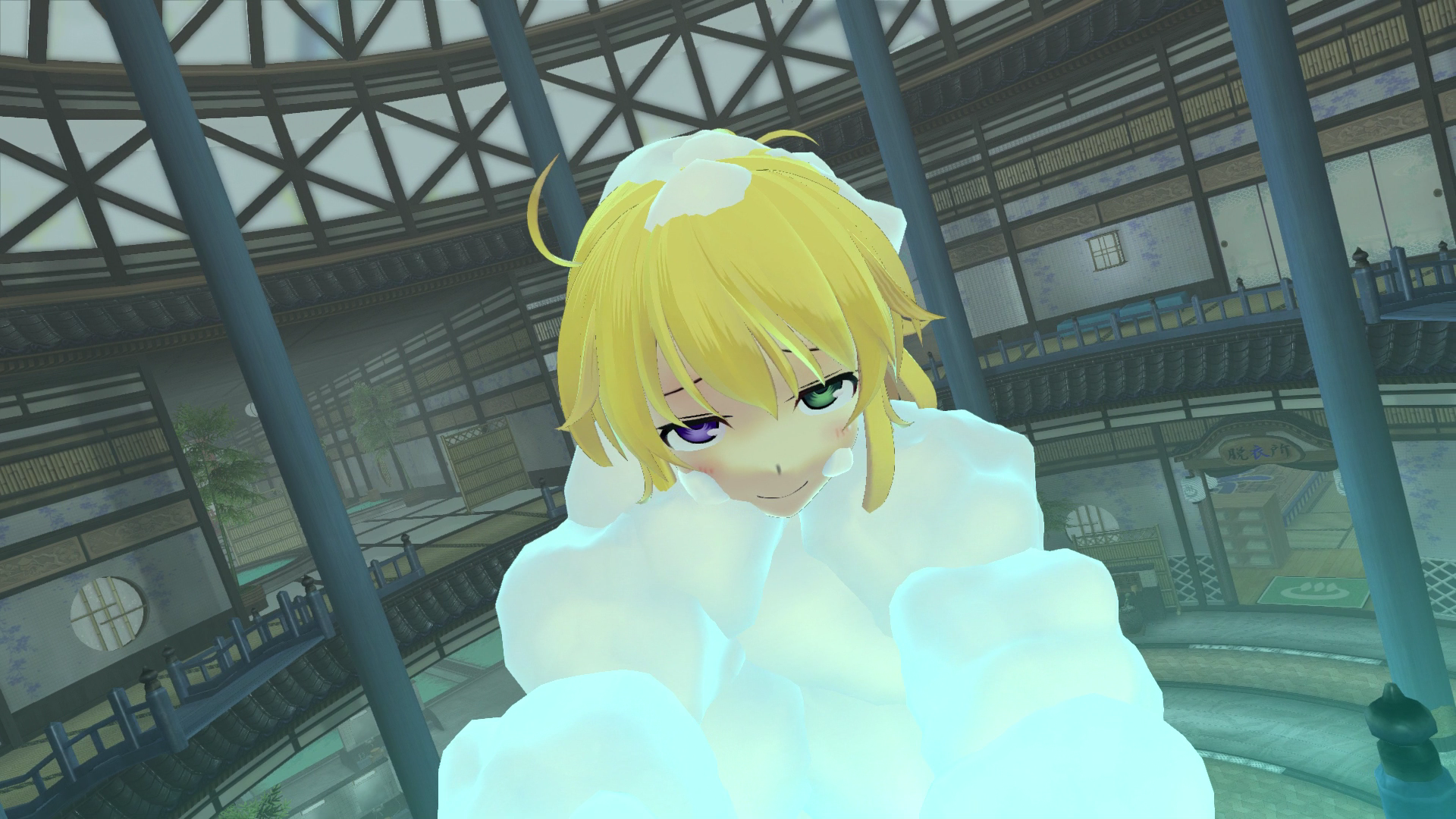 What always impresses me most about the Senran Kagura series is that -- despite its perverted intentions -- it manages to tell a very good and heartfelt story. Although the tale in Peach Beach Splash is pretty good for the most part, I couldn't help but tire of some of the seemingly forced conflicts that were presented in the Hanzō, Gessan, and Hebijo storylines. Perhaps that's why I preferred the Homura Crimson Squad story over the others, as it has a good laugh with the characters as they attempted to boost their online presence and tried to earn shinobi jobs to keep from having to starve to death. (Its Paradise Episode spinoff episodes were also good for some laughs, with tales of ghosts and creating manga being all-around fun to experience.) 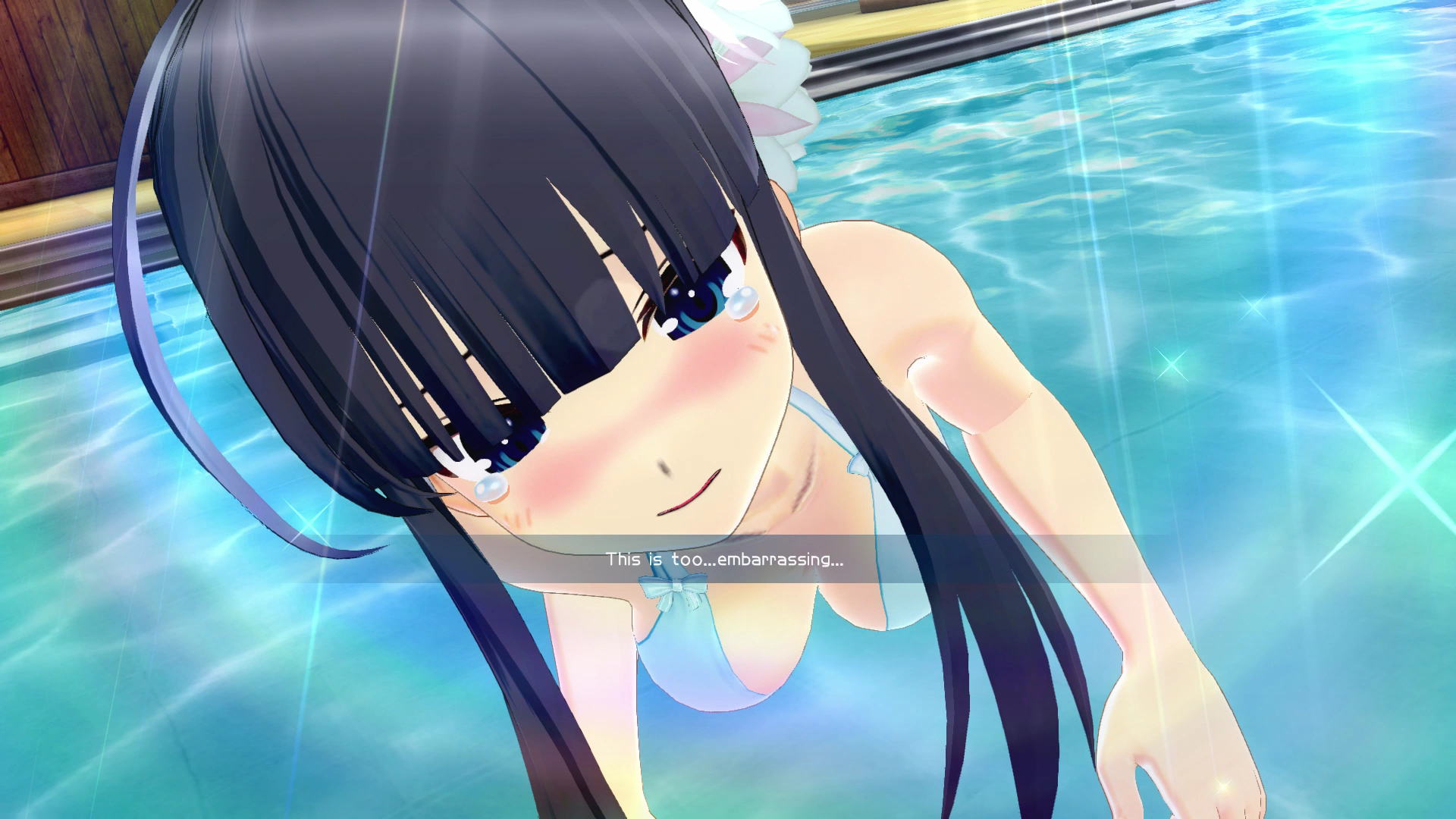 As you play, you'll also earn in-game currency that'll aid in purchasing new clothes, hair styles, and various other extras to look at the library in. These clothes can then be placed on all the girls, whom you can then pose in various ways in diorama mode. If you can figure out some of its hidden Easter eggs in the dressing room, you may be able to find some derpy-leveled fun with your hands. (A future update will implement PlayStation VR for this mode, which -- depending on your age -- may give some gamers heart attacks.)

Outside of the main game and side-quests, Peach Beach Splash also features a mode known as the V-Road Challenge. With your customized team, you can participate in a twenty-round tournament that'll get tougher as the game progresses. The more you win, the bigger the rewards will be. It's a long journey, but the payoff is well worth it in the end. 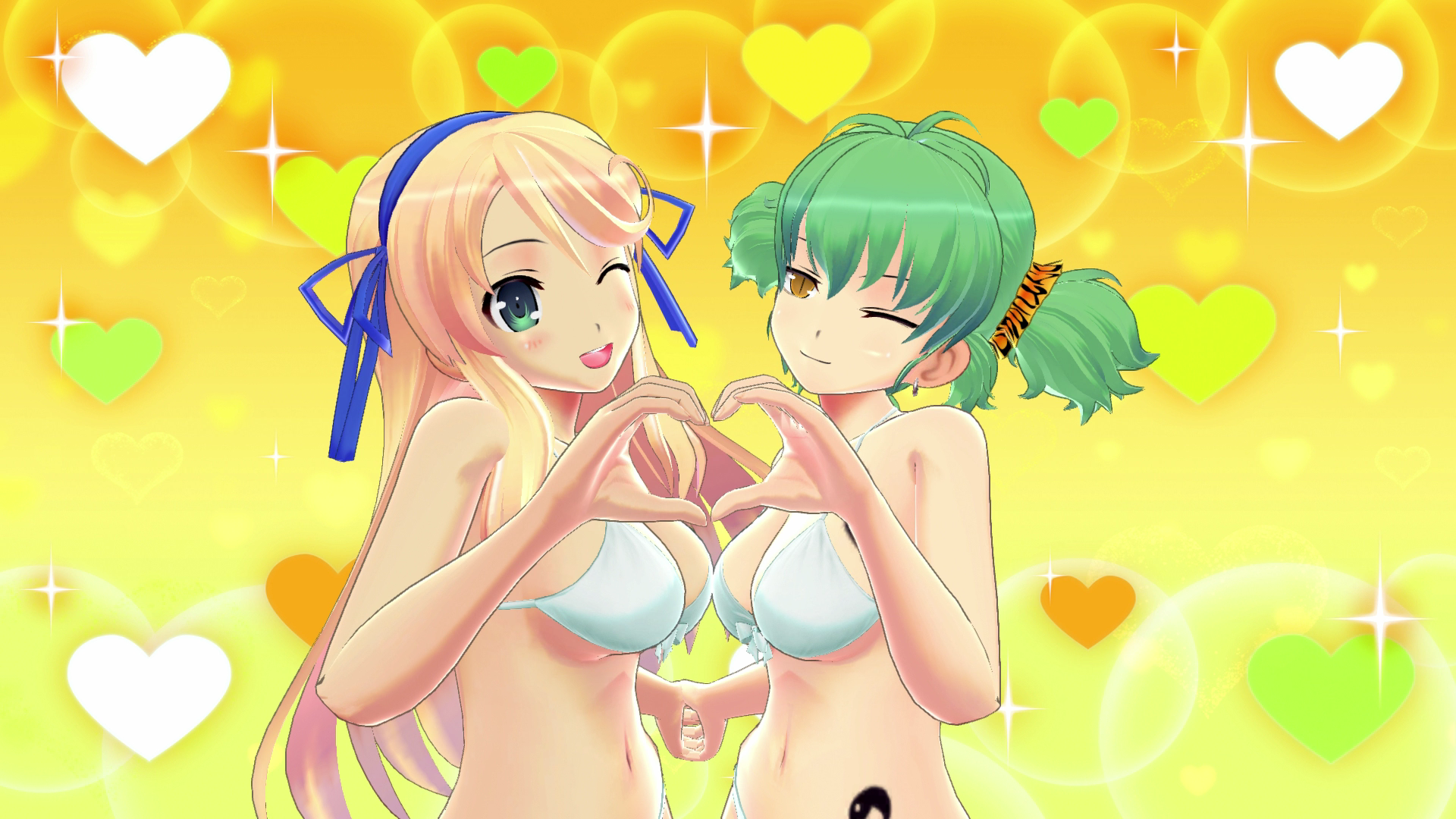 Finally there is the multiplayer mode, where up to ten players from across the globe can fight for all the glory in the world. Ranked Matches will have you go 5 Vs 5 with the same point level as you, whereas Free Match has you do what you want with your own customized rules, stages, and participant numbers. You can choose to play co-op, traditional Deathmatch mode, Tower Survival, and even the return of Capture The Bra. It can be tough to find the right amount of people online playing at once, but once you do you'll experience countless hours of fun with friends and fellow players alike.

While it doesn't have as strong a story as its Estival Versus predecessor, Senran Kagura: Peach Beach Splash is still a fun, no-holds-barred joyride. Whether you're sprucing up your skills in single-player mode or going crazy online in probably this year's most underrated multiplayer mode, there's plenty here that'll entertain your brain, funny bone, and digits throughout its run. Just don't take it too seriously, and embrace Peach Beach Splash for being this year's most shamelessly feel-good romps in gaming.

Background Noise: I Get Wet by Andrew W.K. - When you have a video game depicting cute girls in squirt gun battles, there's no better soundtrack than the debut album from the king of party. Whether you wanna "Party Hard," face death in "Ready To Die," or confess your love to your Senran Kagura waifu with "She Is Beautiful," the long-haired master of ceremonies is there to headbang along to your scenarios.