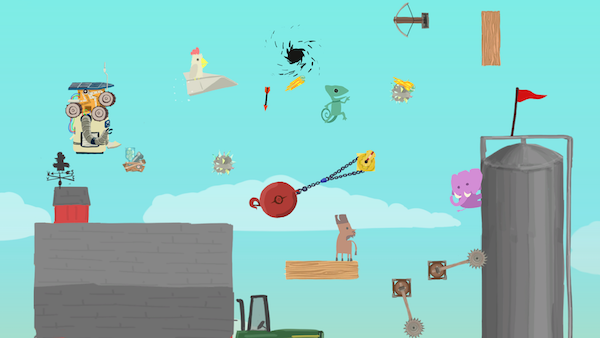 Growing up in a highly competitive house, I've grown into a fair bit of anxiety when it comes to competitive games. Finding one that manages to feel just as fun whether you win or lose is rare, but Ultimate Chicken Horse nails it. I can't tell you the number of times play sessions devolved into the entire room laughing as the ridiculousness of the stages grow each round. Coming newly to the PS4, Ultimate Chicken Horse is one of the best couch competitive experiences available on the console which can be enjoyed by the whole family.

The thing that sets Ultimate Chicken Horse apart from other competitive games is player-built humor. Each level starts out extremely simply, but as more elements get introduced by players, the stage can become hilariously hard, ridiculous or even accidentally brilliant. Thankfully, the game includes the ability to save a level if it becomes particularly devious or just hilariously hectic. Ultimate Chicken Horse also comes with a creative mode where players can carefully choose the obstacles they place in a stage. This mode is a fun way to get a good handle on how each object can be useful, but the real meat is the main competitive party mode. 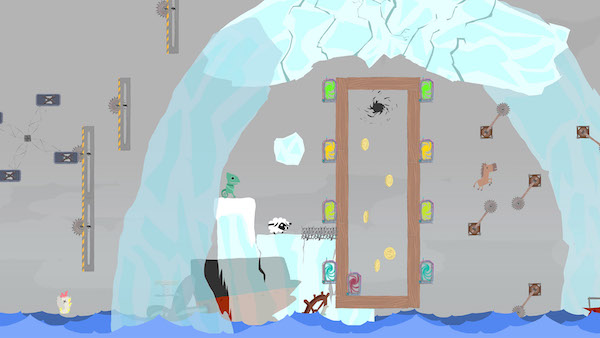 The main concept behind Ultimate Chicken Horse is extremely simple. As an adorable animal, players must platform their way from one side of a stage, to a flag on the opposite end. The trick is that the path to the goal is slowly build by the players each round. Before running towards the goal, all players are given options of things to place in the stage. Some of these can help them reach the goal and others are traps meant to keep their competitors from arriving safely at the flag. Since up to four of them items are placed each round, the path to the goal can get treacherous, or often impossible, quickly. Points are awarded after everyone has either succeeded or failed to reach the end, with bonuses for various actions like finishing alone, first or after dying.

The controls in Ultimate Chicken Horse feel tight and fair, reminding me quite a bit of Super Meat Boy. This doesn't translate to a game anyone can pick up and play immediately though. Multiple friends who've had less platforming experience had a tough time handling the wall jumps in the game. As there is at least a little bit of verticality to all of the levels, this can be a problem that can leave matches a little one-sided. Booting up the endless mode and allowing more inexperienced players to get a feel for the controls first is a good way to remedy this potential issue. Either way, once everyone ha a good feel for it, Ultimate Chicken Horse feels very good to play and never feels unfair. 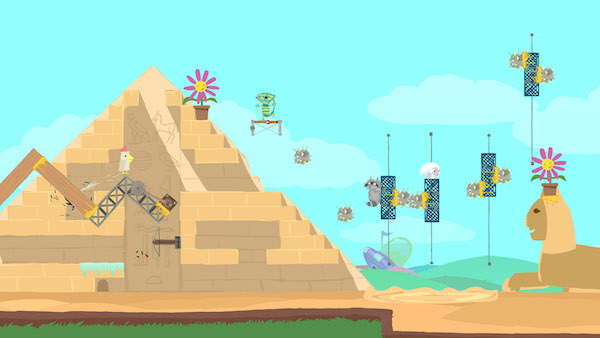 Progression in Ultimate Chicken Horse is handled by these mystery boxes hanging in the sky by a balloon. Touch them and the balloon pops, with the crate falling to the ground to reveal their contents. Unfortunately, if the right kind of trap is blocking the crate, it can't fall down all the way and won't grant an unlock. This is incredibly frustrating when it happens, as sometimes I'll have played a particular level just for the unlocks. Stages, characters and costumes are all unlocked this way and there is a great assortment of each. Stages vary from a simple rooftop, a pyramid and even a boat that travels across the stage. Each level comes with its own set of hazards, which can compliment the added traps in some fun ways.

New to the game, challenge mode lets players upload levels to the internet. The stages can then be downloaded and played by anyone across the world, fighting for the best clear times. While this seems like a slam dunk in the way that Super Mario Maker was addictive to try out player-created levels, the simplicity of the concept holds it back a bit in Ultimate Chicken Horse. Since one hit takes you out, it's all about getting through quickly and that's about all there is to it. Choosing a different level also takes way too long for the flow of it to feel right. The update also added an adorable elephant character and some awesome new traps to throw into levels. One of these is a wrecking ball and it might be my favorite trap in the game because of just how tricky it can make certain levels. 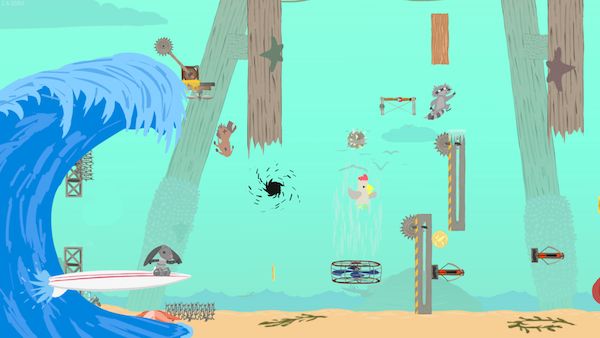 Few games can cause an entire rooms to erupt in laughter the way that Ultimate Chicken Horse does. After creating a labyrinth of spinning buzzsaws and arrows, managing to get most of the way there only to get an arrow on the butt is both frustrating and hilarious as long as there is a crowd to laugh at your misery. Sharing in the success and failure of each player is what makes this game so successful and makes it worth grabbing for your next party. Ultimate Chicken Horse is available now for PC, PS4 and Xbox One. It will be coming to Nintendo Switch in Q1 of 2018.