**WARNING: The following review may contain some political and social opinions some readers may not agree with**

Right now, guns are a hot topic in the U.S. Even if you are looking at this article weeks, months, or years after it gets posted, odds are it will still be a hot topic. Whether it's a mass shooting or more lobbyists breaking the manhood of certain politicians to get more firearms into the public hands, the talk about guns will never fully go away. So it would seem rather appropriate at this very time that the Melbourne-based Samurai Punk has unleashed its twist on America's obsession with its bullet-shooting weaponry in the form of The American Dream VR. How you react to it will be on par with which side of the aisle you sit on in this debate.

Taking place in a Tomorrowland-like ride, The American Dream VR has you welcomed to a world where guns are used to solve every day average problems. With your canine guide Buddy Washington to narrate your journey, players will immerse themselves in a world where guns can be handled by infants, kids, teens, and respectable adults for all their necessities. You eat your food by shooting it, clean your room by blasting away everything until organized, dance at the prom with your favorite handguns by your side, and even exchange your marriage vows in a literal shotgun marriage (with Buddy holding a Good Book written by a certain gaming directing legend). Its absurdity is pushed to the breaking point where the most craziest scenarios slowly unwind into the stranger-than-fiction truths that we've come to be accustomed to in this day and age. 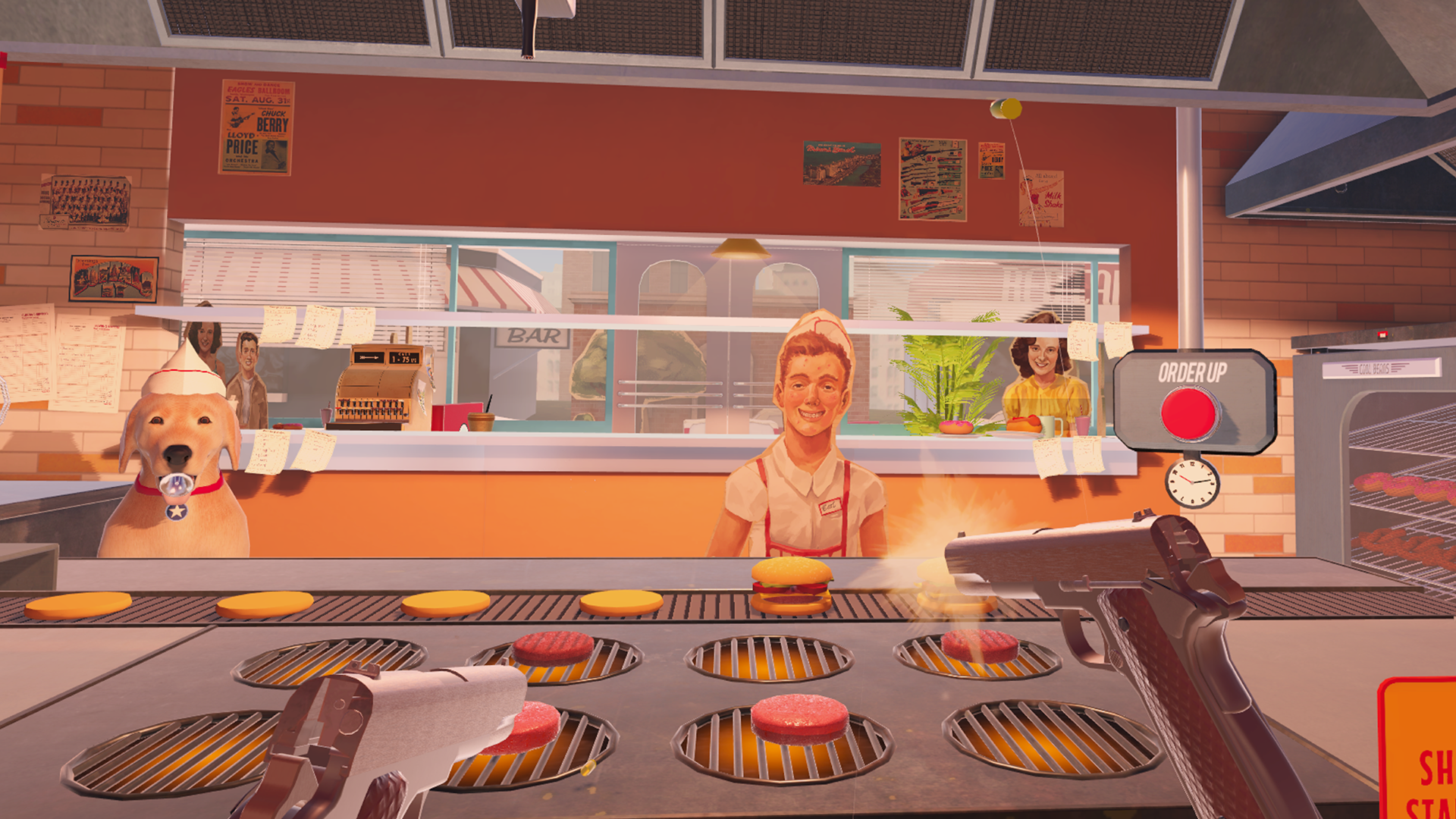 And yet, all of this is presented with a good laugh at the expense of the gun-crazy American population. These sorts of individuals who wants every single man, woman, and child -- no matter if they're fit to or not -- to own a piece for their own necessity will find it very hard to swallow when they see this game's warped interpretation of how gun laws work in the good ole U.S. of A. Playing catch with your dad as you shoot away balls or go fishing with him with a trust rifle as your tool instead of a fishing rod reaches levels of pure craziness. Jobs involving flipping burgers, adding holes into bagels, and tending to your garden is taken to a new extreme when you use your pistols to get everything done.

The American Dream VR is indeed a loony interpretation of the country's adoration for its Second Amendment rights, so it goes without saying that a good chunk of it should not be taken seriously. With that being said, it's later on in the game's four-hour experience when the harsh realities of the goings-on in this country of ours start to peer its head. Although there really isn't a big epiphany moment where the game points out what wrong with this mentality, it does showcase how insane one has to be to put a hunk of metal that fires tinier hunks of metal over the safety of one's kid and significant other. It doesn't go all the way with the face-slapping when it comes to its commentary, but it does know how to annoyingly poke at those whose ass-backwards thinking is affecting the sanity of this nation. 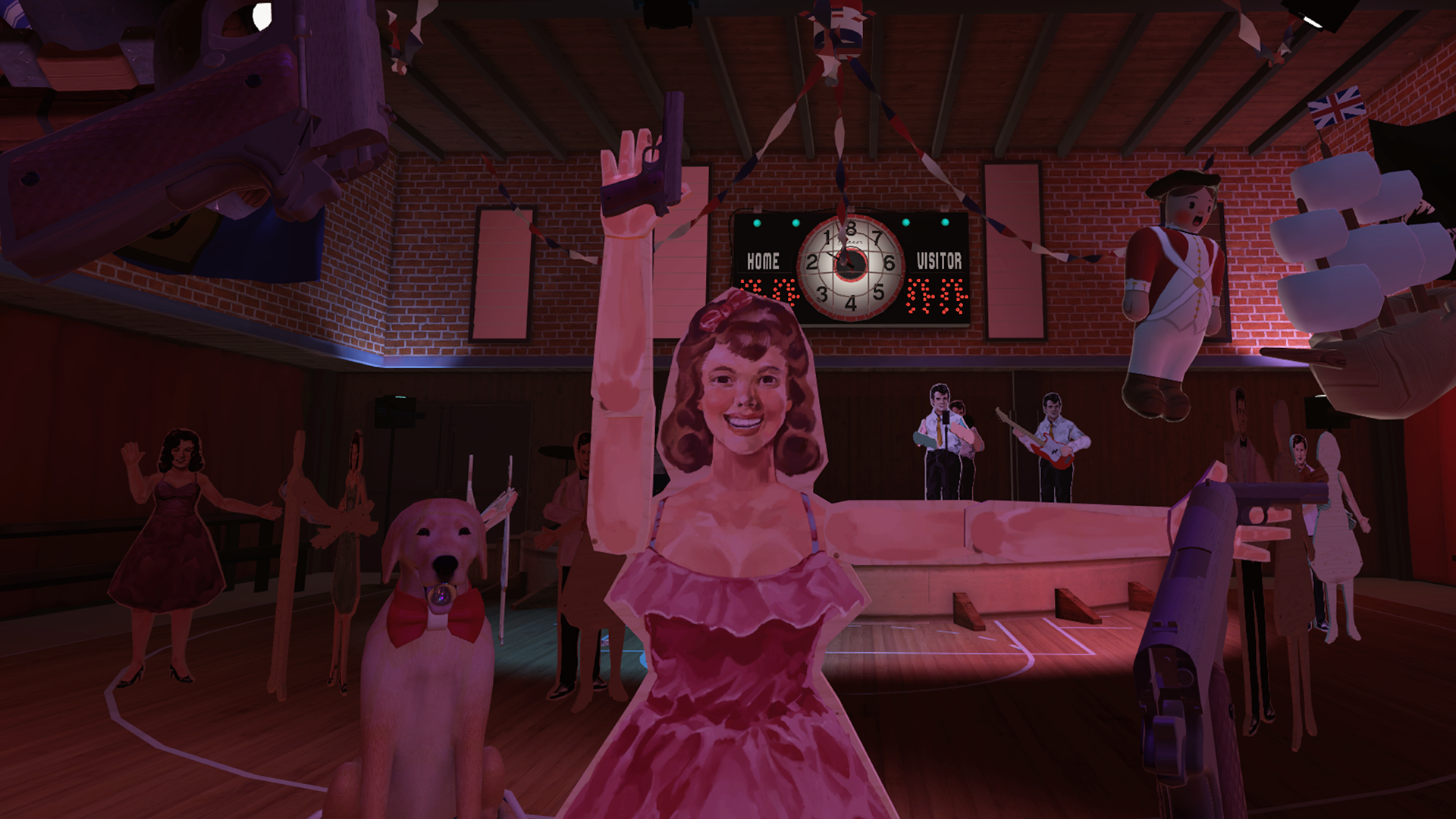 Samurai Punk has done a fantastic job with presenting this game in its 1950s-inspired utopia. From its picket fenced-settings to the well-made faux educational videos from back in the day, The American Dream VR is a loving rip on the era of Leave It to Beaver and The Andy Griffith Show. It does well with immersing its players when it comes to its settings, especially with its theme park ride-like mentality and interesting means of showcasing double standards. (There's even a sex scene scenario that you can only hear and not see, as the ESRB seems to give the M-rating OK to the most harshest of violence; yet Heaven forbid someone sees two consenting adults getting their freak on! Because, you know, think of the children, dammit!)

As for its controls, The American Dream VR does a mostly good job with reading your movements via the PlayStation Move. Only in a couple areas did I find it glitch out on me, especially when using a rifle or sub-machine gun that requires two hands to use at one. (I can go the rest of my life without feeling stuck in the Dunk the Communist game, thank you very much!) Other than those wrinkles, aiming and precision is surprisingly well-done, with hitting certain targets or taking on a most Modern Warfare-style of barbershop etiquette being rather on the nose. 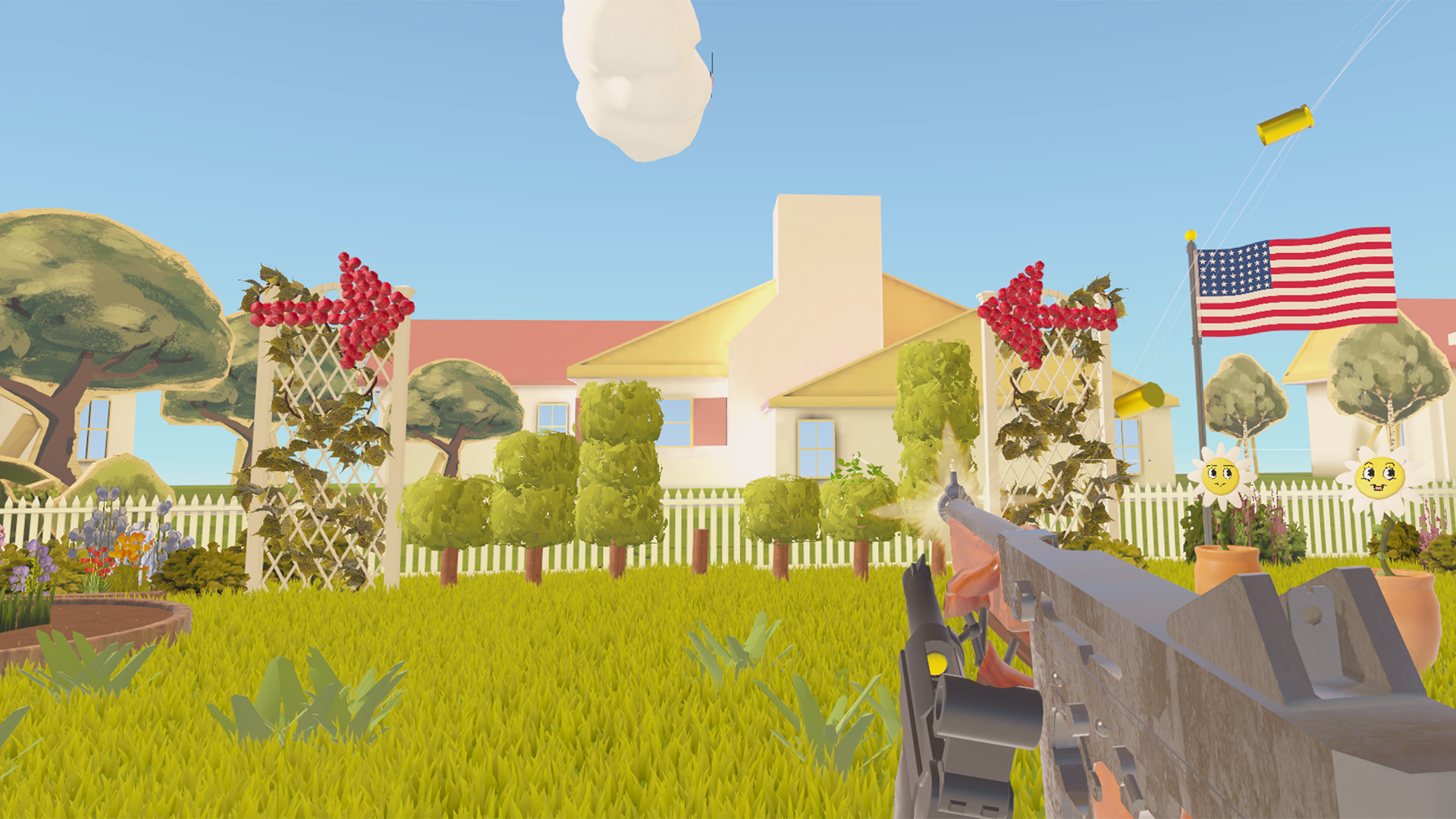 It's hard to talk about this game without spoiling some of its surprises, but let's just say there is a moment where its tone goes down a dark path. Again, this is the type of virtual experience that will spilt people depending on their core beliefs and values. So if you dive into The American Dream VR with a certain gun-loving mentality, well, my only advice is to try & not shoot up your computer or PS4 after you're finished experiencing it. Or do blast them away, so that way, you'll be forced to buy another computer or PlayStation 4 and feed money to an industry that's currently being blamed (again!) for something that's been proven time and time again as being unfounded and false all across the board.

Then again, if The American Dream VR has you getting mad about something, then Samurai Punk has done its job. Even when its tongue is planted firmly in its cheek, this game does an upstanding job with showcasing the trials and tribulations we as Americans face when it comes to some of our country's biggest issues. Needless to say, some people will have to take a good hard look in the mirror and decide if their love for a weapon outweighs their love for humanity. And if it they love their guns more than they love our citizens, well, I shudder to think what that will lead them to do in the future.

The American Dream VR is a fun blast of truthiness that plays well with our current political and social landscape. Although it does fall into the love it/hate it way of final impressions, Samurai Punk should be commended for bringing up such a topic in a unique and brainy fashion. It may not quite be the thing that will change people's perspectives, but The American Dream VR commits and succeeds at being both funny and sharp about its subject matter without sounding too preachy about it.

The views and opinions presented in this review reflect only of those of the author, and not those of ElectricSistaHood as a whole.