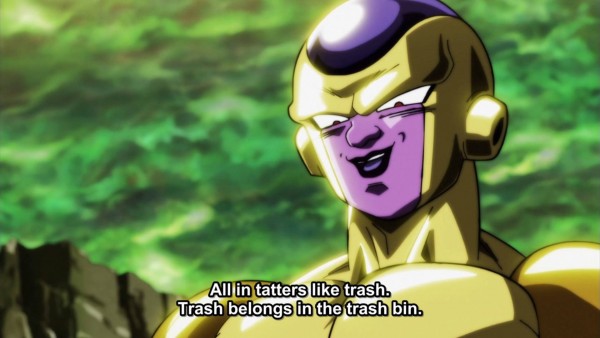 I don't know what's going to happen in the "final" episode of Dragon Ball Super, but I'm glad that I don't know what we'll be seeing when the show takes a bow. Will Universe 7 actually lose? Hey, don't count that possibility out! Ge Ge Ge no Kitaro is set up to take DBS' time slot in Japan, so all I will have to look forward to is the DB Super movie. Where are we going from here?

Finally Got to See It! 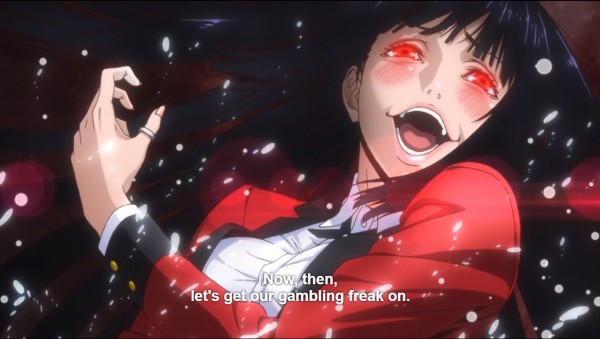 Sometimes, you just want to watch a ridiculous show and let it take you in whatever direction it leads. Kakegururi is a gambling show, but it's definitely not a serious reflection of gambling and how it affects people. Food Wars! brought us the foodgasams, and Kakegururi brings us the gamblegasm.

Children of the Whales 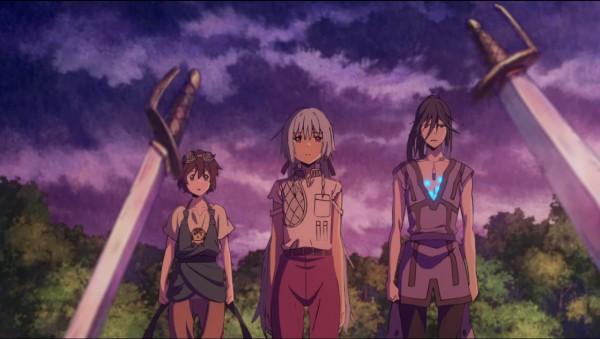 I am definitely glad that I can watch Children of the Whales. I loved Made in Abyss, and this seems to be another fantasy show that builds a fascinating world you want to witness. Whales takes place in some sort of apocalypse. The current humans either have special abilities, and live a shorter lifespan, or are regular humans, and live a long age. The youth of this society, naturally want to find out what is beyond their little patch of land.

Over most things that Netflix is dubbing their "Originals" this is at the top of my list.

Today's Menu for the Maieda Family 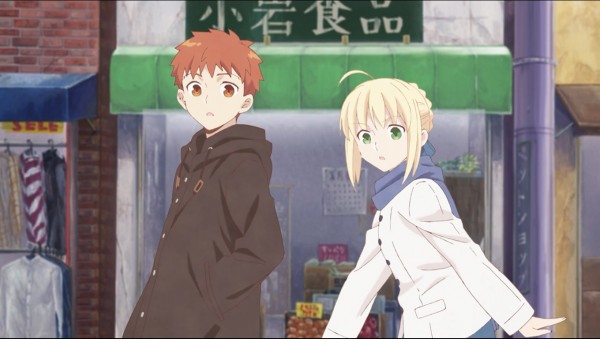 What's this? An anime based on Fate/Stay Night that is all about food? The Fate universe is so vast at this point that I am surprised that I can watch something that doesn't really require me to know anything about the Grail war or servants, or any of that terminology. Of course, it would help to know about all of the Fate/Stay Night characters so you understand the winks and nods to the canon, but you can enjoy the good animation and cooking scenes as a newb. 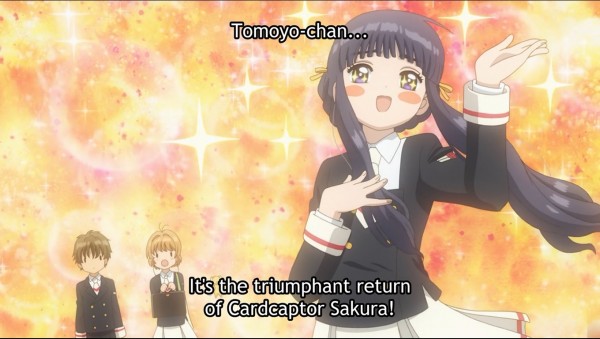 When anime was busting the doors open to America, Cardcaptor Sakura was one of the shows that flooded in. It was a hit, but I neglected to watch the original series when I got the chance. Now it's returned, so I may watch not only Clear Card, but also the original series. 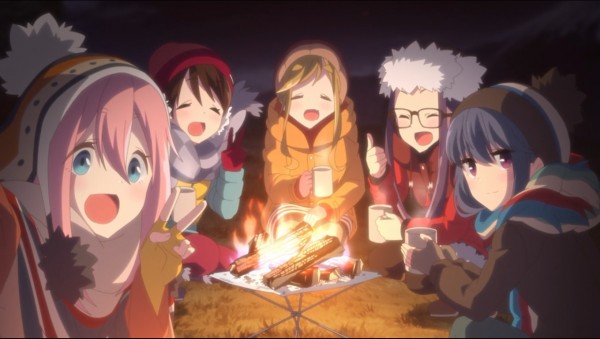 Yay! Fun times making camp. Laid Back Camp is almost one of those shows dubbed "cute girls doing cute things," but  Laid Back Camp stands aside those shows because it doesn't spend time inside a school, where the characters talk about nonsense. We're treated to the beauty of Japan's natural environment, and we learn about surviving in the outdoors. More girl shows like this, please! 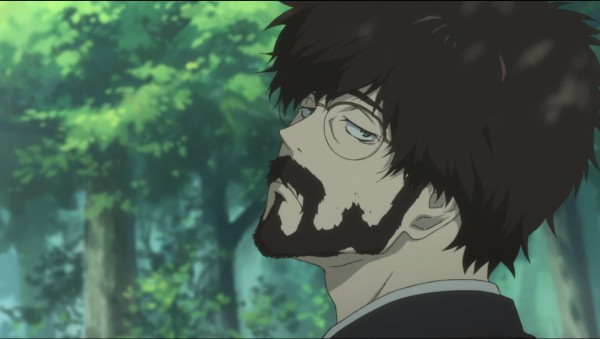 Here we go! Feast your eyes on what is born when you give an anime production crazy Netflix money and tell them to cram as much English and anime tropes into one series as they can. For those who curse Netflix' name for sucking up anime exclusively and putting it behind a "time wall," I hope you can enjoy what Netflix is doing right. B: The Beginning is an ACTUAL Netflix Original anime; you will find it nowhere else (until the pirates get their hands on it). It's also an anime original, so this is one of those cases where your manga-devouring buddies can't spoil the plot for you, or tell you "the book is better."

So what's the plot? I thought that this was going to be a basic detective story, but I felt like the trailers have hidden how supernatural this show is. B: The Beginning takes place in a fictional country, and the special police force is called the RIS. They are investigating mysterious murders, which leads to a hotshot investigator, Keith Flick, to become a part of the case. The mysterious Killer B is killing serial killers, and a bunch of tattooed psychos are masterminding a grand plot. They are definitely related to B, because he has a tattoo as well.

So why isn't this in the best of the season? I don't have faith in this show being anything more than a faux intellectual detective story. It looks super pretty, but my greatest wish is that the super investigator was actually smart, not just a psychic who knows what's going to happen because the script says he does. 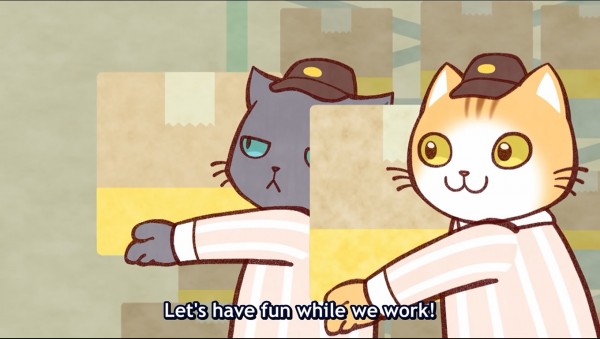 What if you could work every job you've ever had with your best (annoying) friend? Working Buddies is a fun short anime about two cat friends who get hired at a different company each episode. Why do these two need new jobs so often? Don't ask these questions, because you don't need the answers. There's a talking koala, so that's why you should watch it. 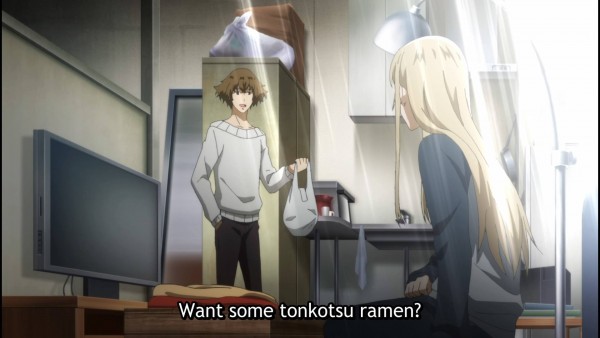 I love the crazy, sprawling cast of Durarara, so when I first saw Hakata Tonkotsu Ramens, I felt that same itch being scratched. Ramens is not as great as Durarara!!, but it definitely puts in effort. Hakata Tonkotsu Ramens is about the underground world of assassination. A cross-dressing assassin crosses paths with a detective, forming an unlikely team. They are both hunted by other organizations in the underworld, and other characters slowly find their paths crossing with these two. 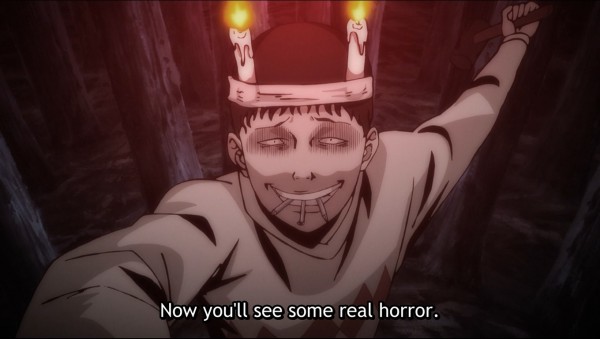 I need a scare. I don't think there's too much to point to when it comes to good horror anime. It's unfortunate that a show about Juni Ito's work is not as scary as I would like it to be. The major failure is the animation budget. Some episodes pull off the mood just right, but most of the time, the animation is just barely better than still images. I think horror buffs should watch Junji Ito Collection, but prepare for a mixed bag. 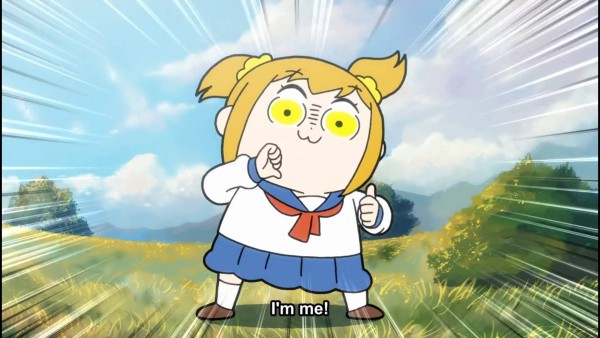 This is probably the most talked about anime of the season. Pop Team Epic is memes, it's trash, it's stupid, it's silly, and, most importantly, it's funny. It's based on a gag manga, so you'll get rapid fire bits very minute or two, and the bits get as ridiculous as a comedy anime can be. If you want to get stupid, watch Pop Team Epic. I dare you! 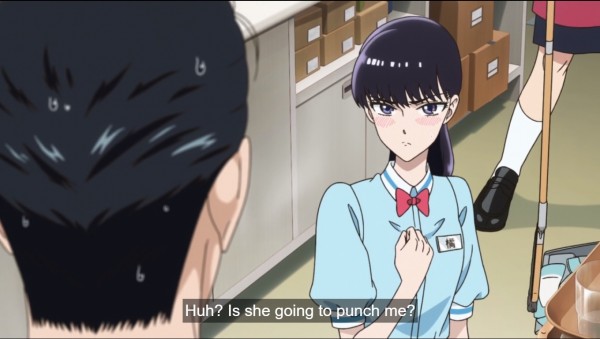 Anime does it again. If you hear than an anime involves a young person and someone much older in a relationship, isn't your first instinct to run? I didn't run, though, because I give everything a watch. I have to report that After the Rain is beautiful in every way. Sure, it's about a high school student crushing hard on a man twice her age, but it's so adorable. Also, they're not related by blood, so that's a point in anime's favor. Way to go!

So if you feel weird about After the Rain because it's dealing with an icky taboo, I can't blame you. I would still tell you to watch at least one episode, because I think this show is charming and heartwarming. I don't know where the relationship goes yet, so maybe it does get icky, but I wager that it doesn't.

A Place Further Than the Universe 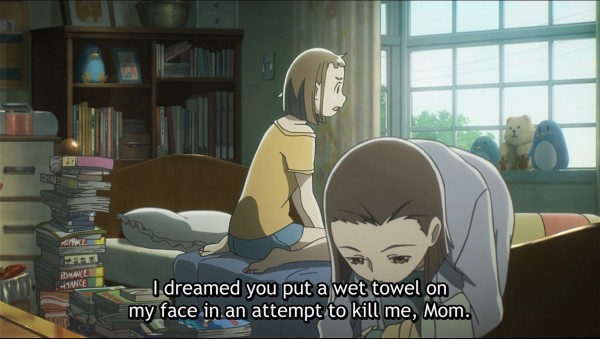 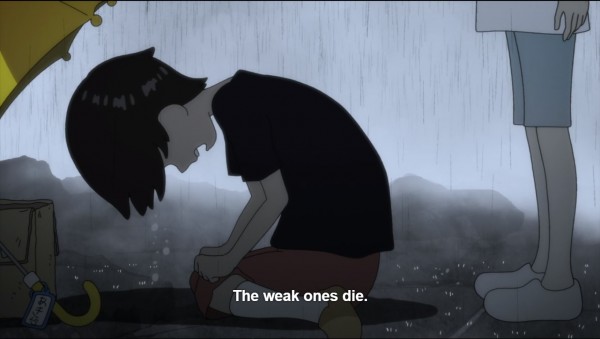 My my my. Go Nagai is not a creator you should introduce to polite company, and the 2018 remake uphold's Go Nagai's penchant for fucked up shit. Devilman Crybaby bathes in blood and boobs, and is not afraid to do anything. Plus, we get some Japanese hip-hop, and it's dope.  This is all I want from anime. 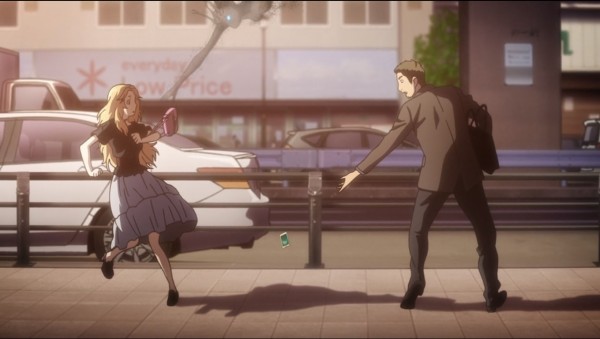 Amazon Strike was a failure that died a horrible death. Bearing that in mind, Amazon still has exclusive anime that is worth watching. After the Rain is one, and Kokkoku is the other. Kokkoku is a mature show, one of the noitaminA shows. A family has a secret power that is passed down their family line, and there are others who want that power for their own use. Kokokku had me in its grip because this family is not an elite group of fighters. There's two generations of people- a Dad, children, and a Grandfather- and they are struggling with normal life. When they're pit against armed killers, you are scared that any of these people could die. So Kokkoku is one reason I still care about Amazon Prime Video. Kokkoku's an excellent anime original series.

That's it! The Winter is coming to a close. This spring is MASSIVE and I'm not just hyping it up. New, high profile anime and sequels to big shows are all coming out for the upcoming season. I might have to follow 2 or 3 times the shows I normally do, and I'm kinda happy about that.

Tags
2018A Place Further Than the UniverseAnimebestCrunchyrollDevilman CrybabyKokkokuNetflixReviewsVichusSmithwinter
Previous Article

GAME REVIEW | A Mystery With Attit...