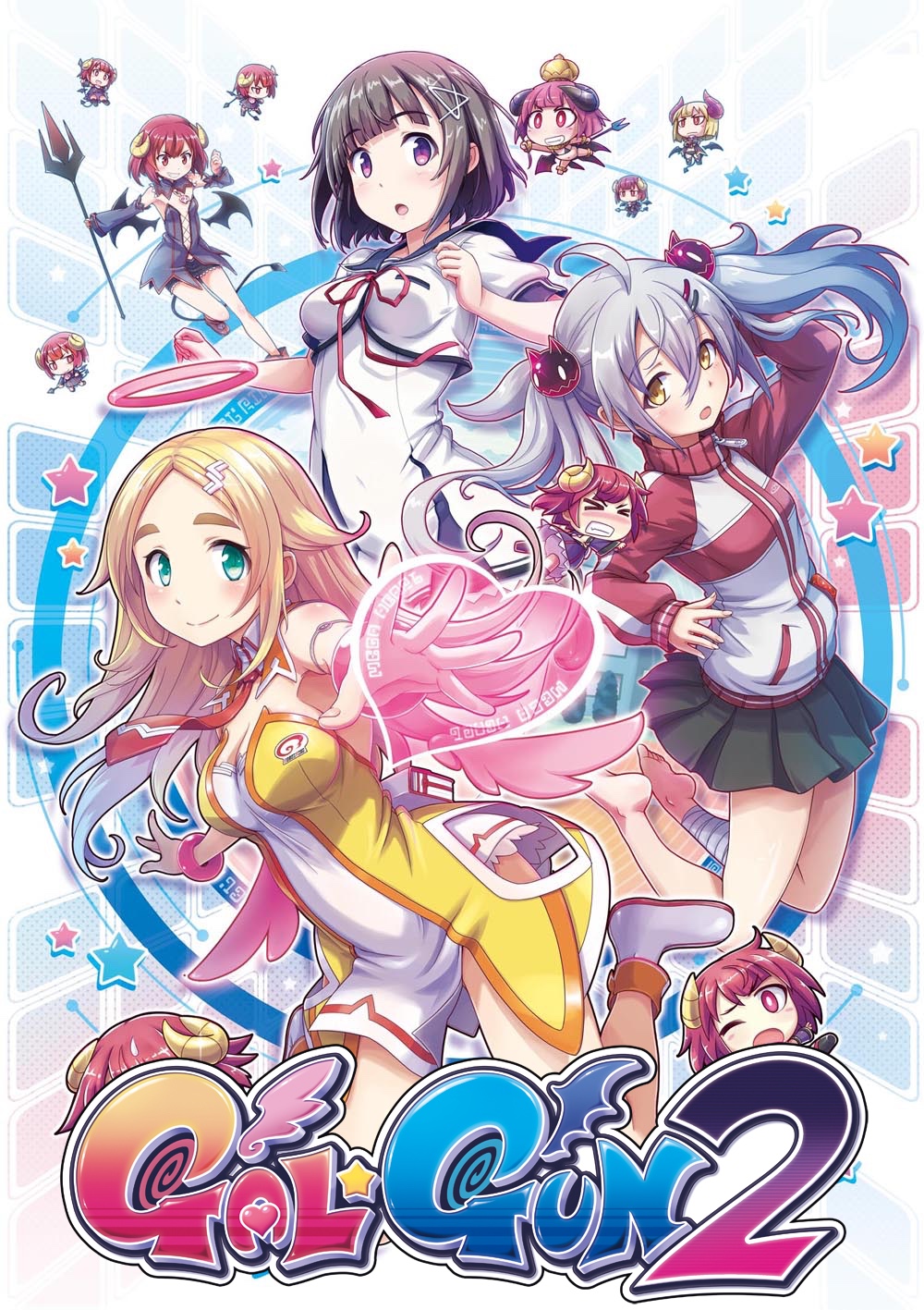 Gal*Gun knows exactly what it is, and perhaps that's why I'm quite fond of it. It never hides the fact that it's reeking with perverted humor at around every corner, and it showcases it with as little caution as you can get away with in an M-rated game. But it's also an incredibly enjoyable rail shooter, one that I place highly on my list of some the best next to House of the Dead and Terminator 2: The Arcade Game. (There's a reason why Gal*Gun: Double Peace was on my Top Ten Games of 2016 list, and it's not for any of the wrong ones.) Now it's once again time to whip out a Pheromone Shot and dive back into this crazy girl-filled world with Gal*Gun 2, but is it as strong as its predecessor?

With a new protagonist at the helm, Gal*Gun 2 starts you off on an average day of high school. A weird app has appeared on your cell phone, and upon clicking it, a strange box pops out of nowhere. Inside are an odd pair of goggles and a tiny vacuum cleaner, which -- with zero caution to the wind -- you put on no questions asked. Upon booting up, an angel named Risu appears, warning you that demons are running amuck on your campus, and it's now your job to take care of them. However, when your close friends gets involved, new secrets about their lives start to unfold before your very eyes. 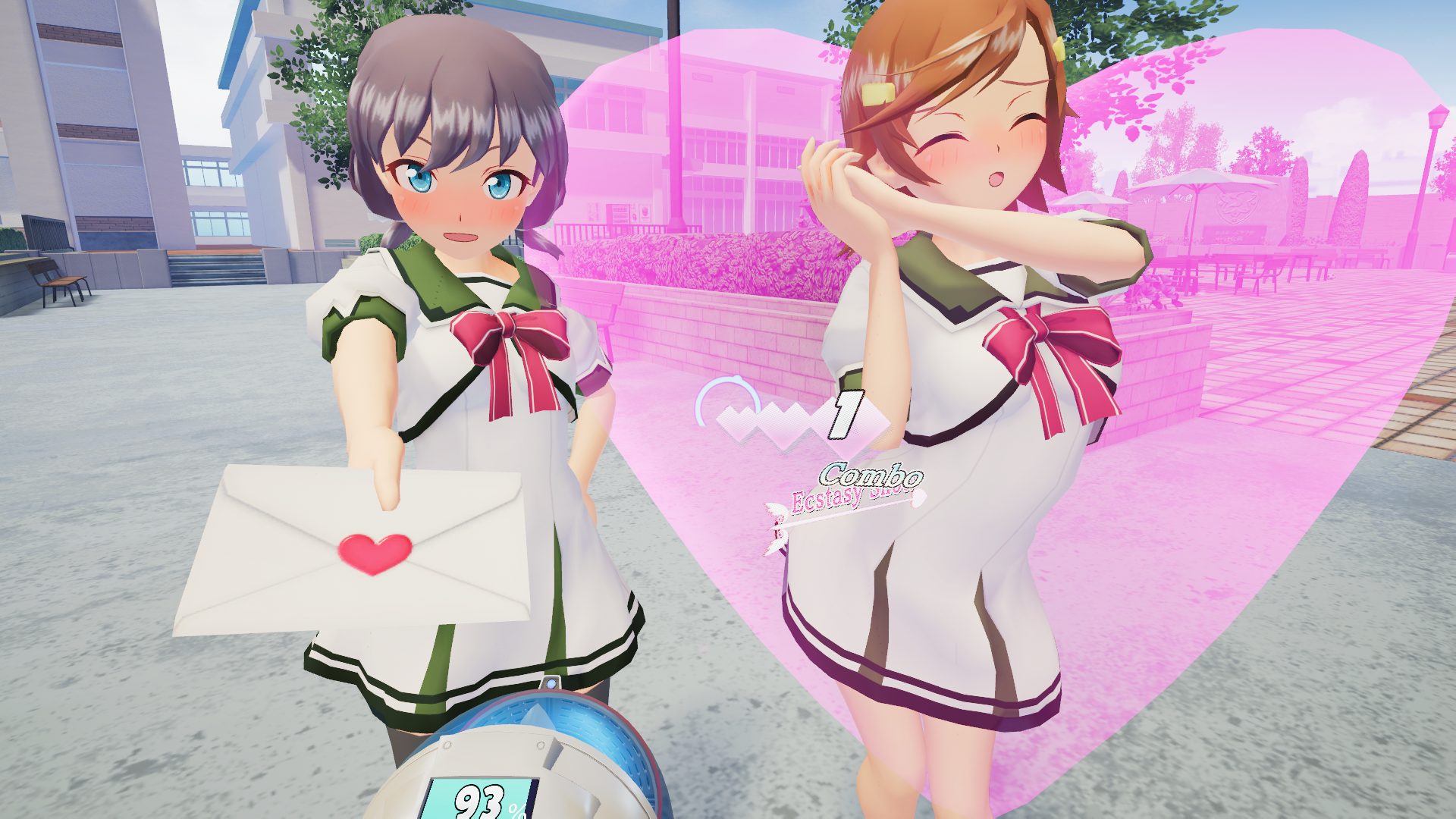 Unlike the first couple Gal*Gun games, there isn't something heavy weighing on your shoulders. You don't have less than a day to find true love, and you've also got practically a month to get the job done. From one standpoint, that gives you enough time to become acquainted with the world around you, as you chat it up with your fellow female classmates and neighbors as you attempt to get to know them even more-so. However, because of this lack of urgency, there's a certain level of excitement that's kind of taken away.

What the game does make that up with is a large assortment of content. Each day, you have the option of choosing two missions, be it the main or side quests. These missions are split into various categories: your run-of-the-mill shooter level, protection quests, item searches, boss battles, and -- of course -- the infamously enticing Doki Doki Mode. With each level, you can earn upgrades for your weapons, as well as candy that you can use to better your relationships with the main and even side girls in your class. (Even as I type that, I realize how wrong the latter part sounds in context.) 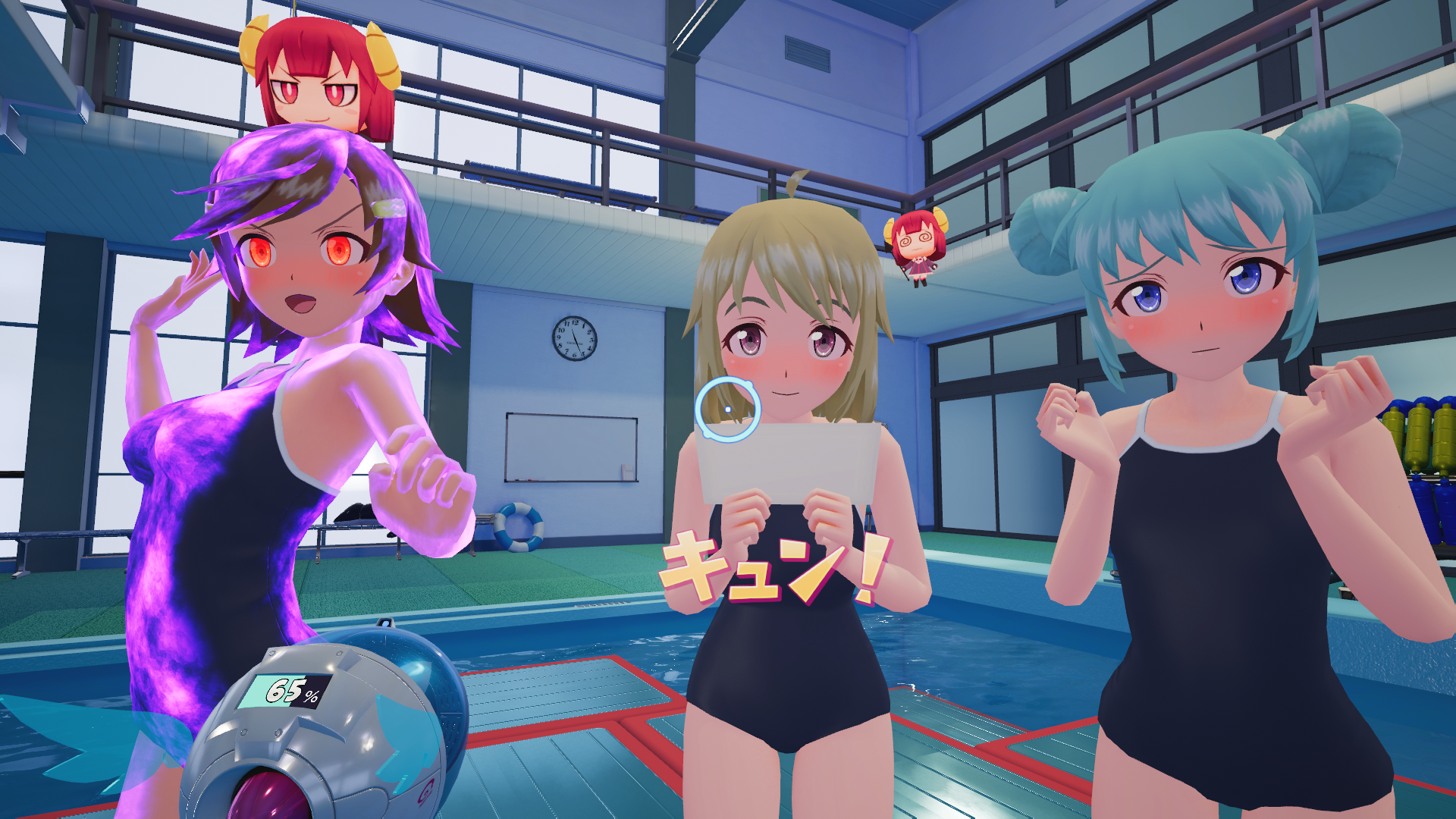 Let's dive into the main gameplay aspect of Gal*Gun 2, which is very similar to the previous titles. You run around each level shooting girls with the Pheromone Shot, taking out both average lovey-dovey students and those who are possessed. However, this time around, you can take your time trying to find hidden secrets in each area instead of moving automatically to the next level. While that does take away from some of the game's challenge, the more difficult A.I. this time around makes up for it. I actually succumbed a lot more in this game because the girls were legit tougher than in the past. Thankfully, there are strategies you can figure out, such as zooming in to the closest girl's face, filling up the heart meter, and taking her and all the other people in room with one nice shot.

Of course, the real fun begins when you figure out how to use your new weapon: the Demon Buster. When you knock off demons from possessed classmates, you'll then have to suck them up with the Buster's powerful vacuum. Yes, you know what's coming: players can also suck up the clothes of your classmates, knocking them out in the process. It's a hilarious sight to behold that never gets old, although there are a couple moments of censorship that made me chuckle after initiating this attack. (Seriously: who wears underwear under their swimsuit? Asking for a friend.) 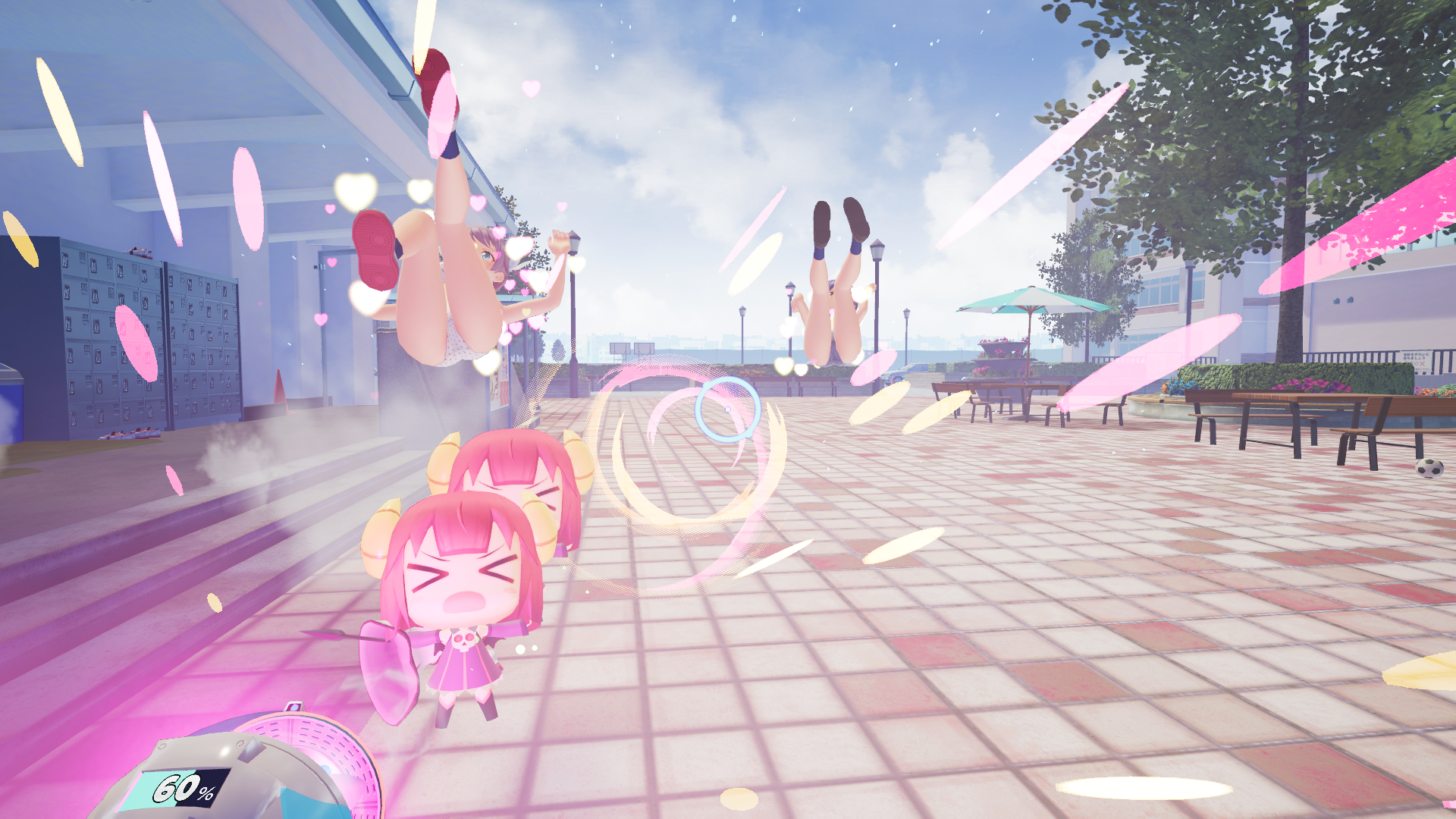 Although Doki-Doki Mode isn't something you can initiate in the main levels anymore, its presence as a quest is still humorous. Finding those sweet spots as you poke out demons and suck them into the Demon Buster is incredibly goofy, with the saucy dialogue from the girls adding more to its pervy humor. With that being said, I do miss the other quests from Double Peace that involved saving your friends from being stuck in promiscuous situations, as it added a sort of variety to the gameplay. While the item seeking missions can be fun, they can also be somewhat of a pain to figure out the location of all the hidden objects.

Perhaps most disappointing is the boss battles. Gone are the giant tentacled beasts you sometimes faced off against in Double Peace. ("Someone must've complained to Inti Creates about that," I muttered as I shook my fist with weak anger.) Instead, the battles are mainly against the main villain of the story (and last game's best girl) Kurona, whose tactics are pretty much the same each time. There's another enemy you can face off against too, but I don't wish to spoil the story that Gal*Gun 2 has to offer. 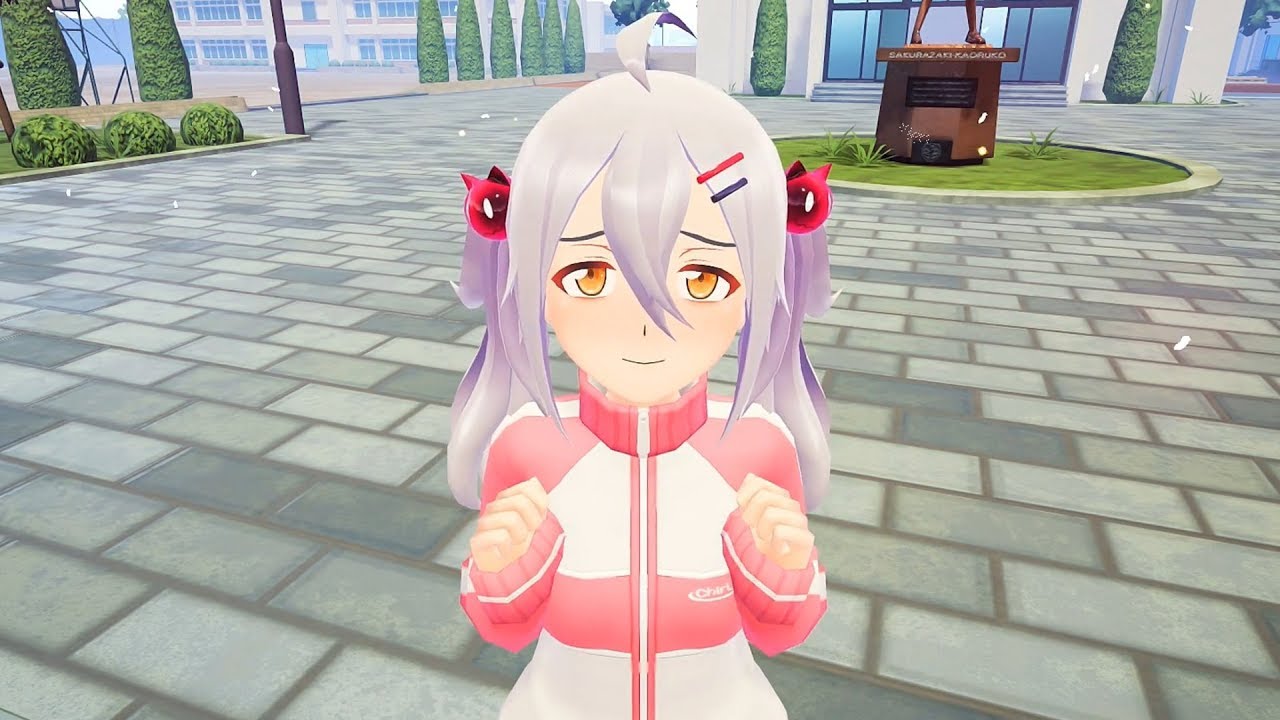 Speaking of which, I'm always surprised when the most ecchi of games has an actually good tale to it, and this is no exception. While there is the main story involving Risu and aiding her with demon capturing, there are other tales that you can embark on during the game's runtime. You learn more about (new best girl) Chiru, your shut-in neighbor who you assist with embarking on the outside world one step at a time. Classmate Nanako has her own issues involving a literal inner demon that acts as a very cute childhood friend romance affair. Also showing up are Maya and Shinobu from Double Peace, and while they are romanced in the same way as the side classmates, they do offer a fun storyline that involves them initiating you into the demon fighting world.

All of this is presented with very anime-like 3D visuals. Although it doesn't use the Unreal Engine to its fullest potential when it comes to the overall presentation, it's very easier to see how much bigger of an improvement Gal*Gun 2 is graphically compared to the predecessors. Equally on-par is the voice cast, with Chisa Kimura (Risa), Yuna Tanaguchi (Nakako), and Risae Matsuda (Chiru) rounding up the new cast with pure adorability and humor. Of course, Aya Fujita once again steals the show as the demon Kurona, providing a bigger dose of humor to the story when she pops onscreen. 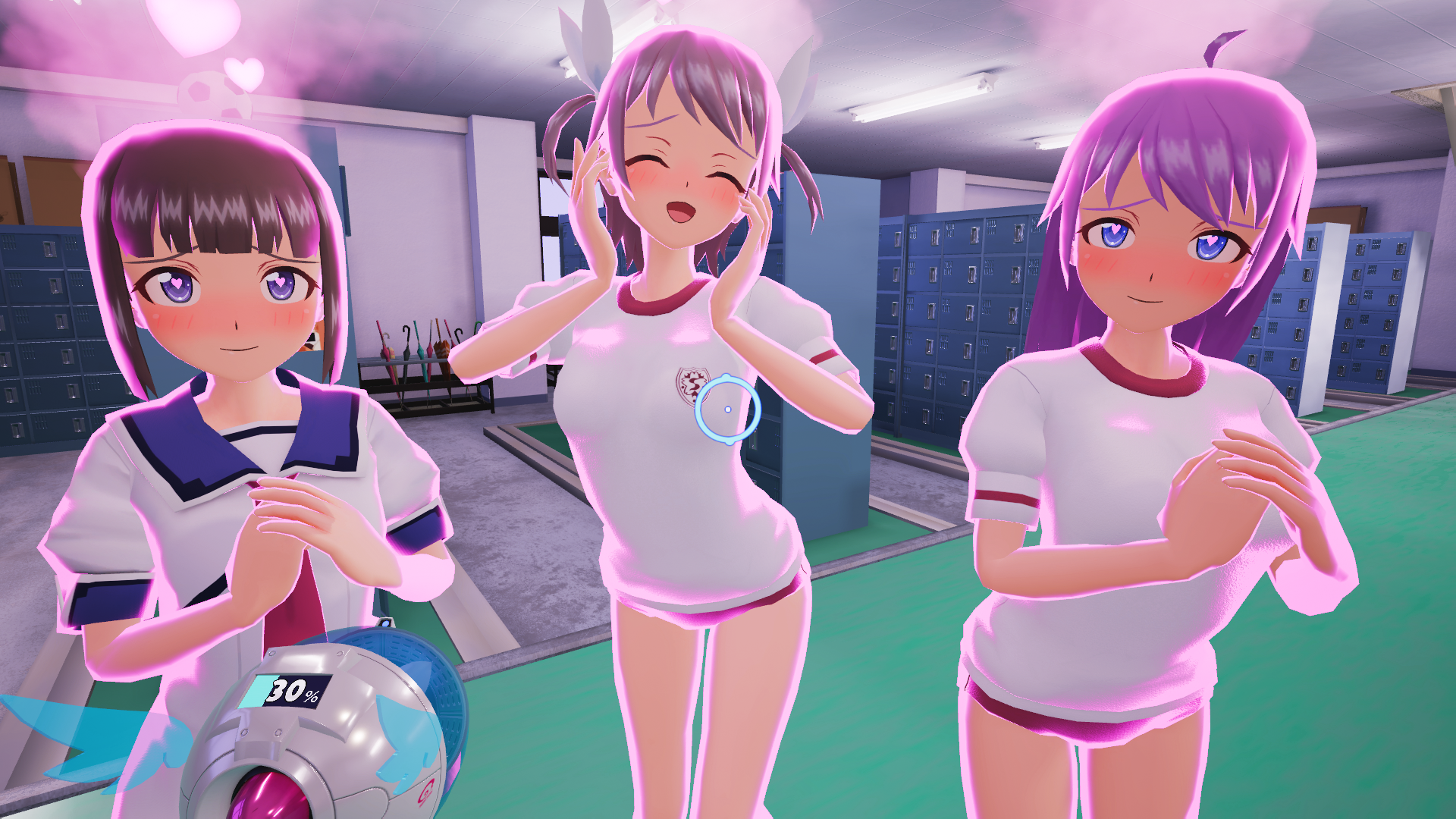 With all this at your disposal, Gal*Gun 2 offers a huge amount of replayability. As there are multiple endings to discover throughout the game, you can expect to revisit the seven-hour experience on many occasions if you wish to find them all. The bad news is that there isn't an option to save multiple files and try each path like in the last games. Thankfully, there is a New Game+ mode that comes up after beating the game the first time that stores all that you've earned and upgraded for the next play-through. (And yes, you can choose to skip scenes to make things go quicker.)

Gal*Gun 2 offers a lot more of what fans want, and then some. Although it does lack boss battle variety and the urgent need to clear levels, it makes up for it with a tougher A.I. system and a stronger visual novel-inspired storyline. If you can look past the more perverted aspects, then you'll find a lot to enjoy in the latest in Inti Creates' franchise. Simply put: Gal*Gun 2 is one sequel worth shouting to the heavens about its awesomeness. (It might be best to shout it quietly, in order to keep some sort of dignity intact.)