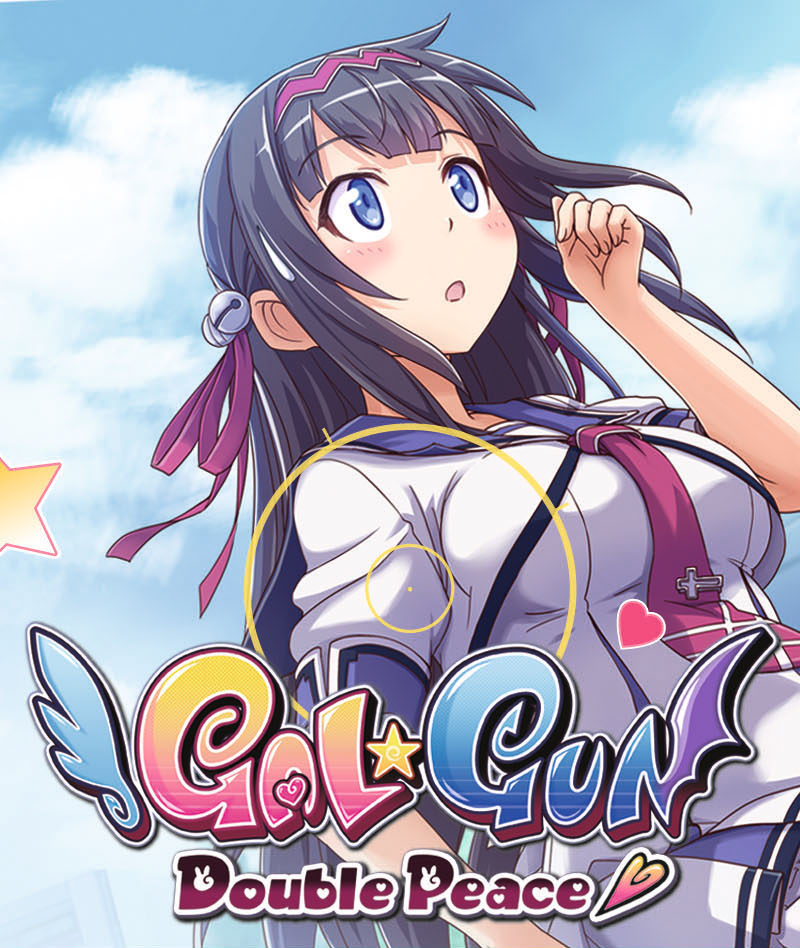 When I was a kid, I would plunk myself at the nearest rail shooter at the local arcade. The likes of Terminator 2: The Arcade Game and Aerosmith: Revolution X were at my beck and call when I had a good amount of quarters in my pocket. Needless to say, when a really good rail shooter appears in my sights, I cannot help but play it constantly.

Which leads me to Inti Creates' Gal*Gun: Double Peace, the sequel to the Japan-only rail shooter that has just popped onto the PS4. Yes, on its surface, it's a very perverted game where you shoot pheromones at the lovey-dovey classmates who are under your spell. However, despite its appearance of a cash-grab shooter for the otaku demographic, Gal*Gun: Double Peace is -- in fact -- one of the best rail shooters to come out this decade. 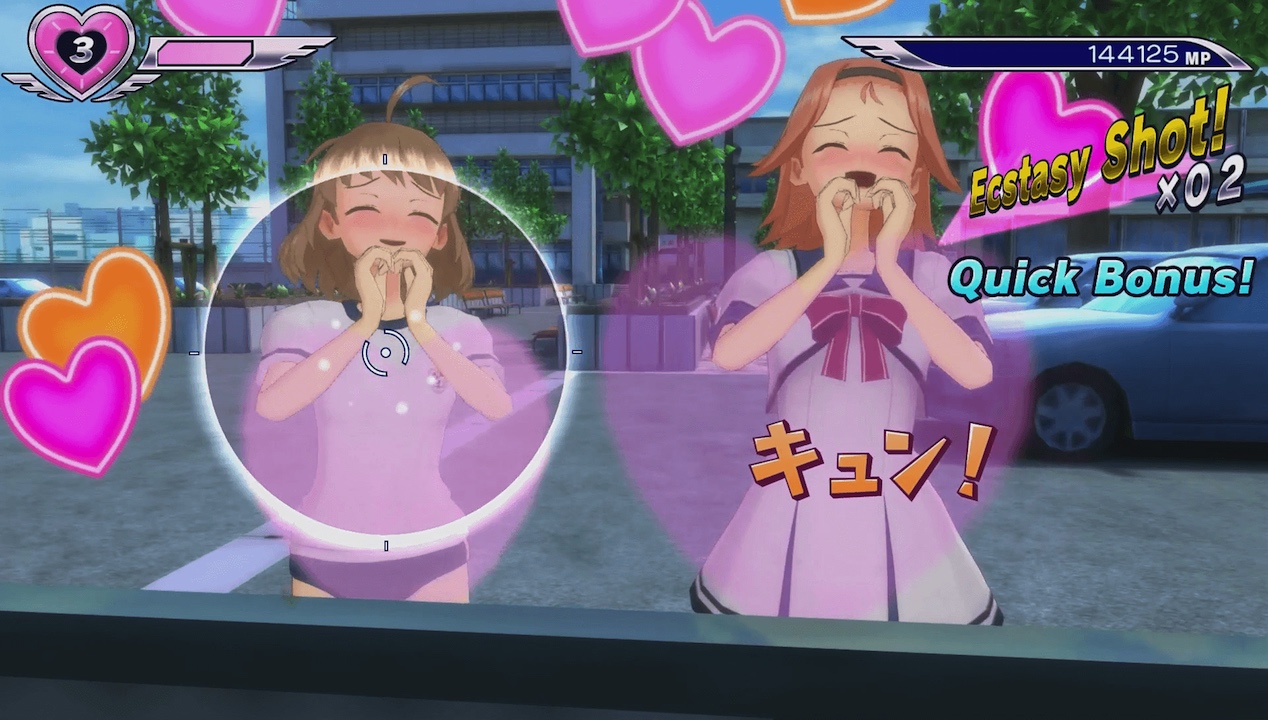 Okay, you may thinking that my opinion of this game may be hindered by the fact that I watch a lot of anime. While this may be true, I'm usually turned off by the kind that is all fan-service and no plot or character development. (I'm looking at you, To Love-Ru!) So I was pleasantly surprised that not only was there a coherent plot in Gal*Gun: Double Peace, but it also a very funny script and a plethora of likable characters.

The game has you play the role of Houdai, who recently has become reacquainted with sisters Shinobu (Emi Uema) and Maya Kamizono (Chinami Hashimoto). Meanwhile, the Elite Apprentice Angel Ekoro (Yui Horie) is attempting to complete her final exam; however, the appearance of Demon Academy student Kurona (Aya Fujita) makes Ekoro rush to fire an arrow at Houdai that has the power of 32. When Houdai comes to, all the girls start fawning over him, with Ekoro telling him that if he doesn't confess to the one he loves, he'll never find true happiness for the rest of his life. 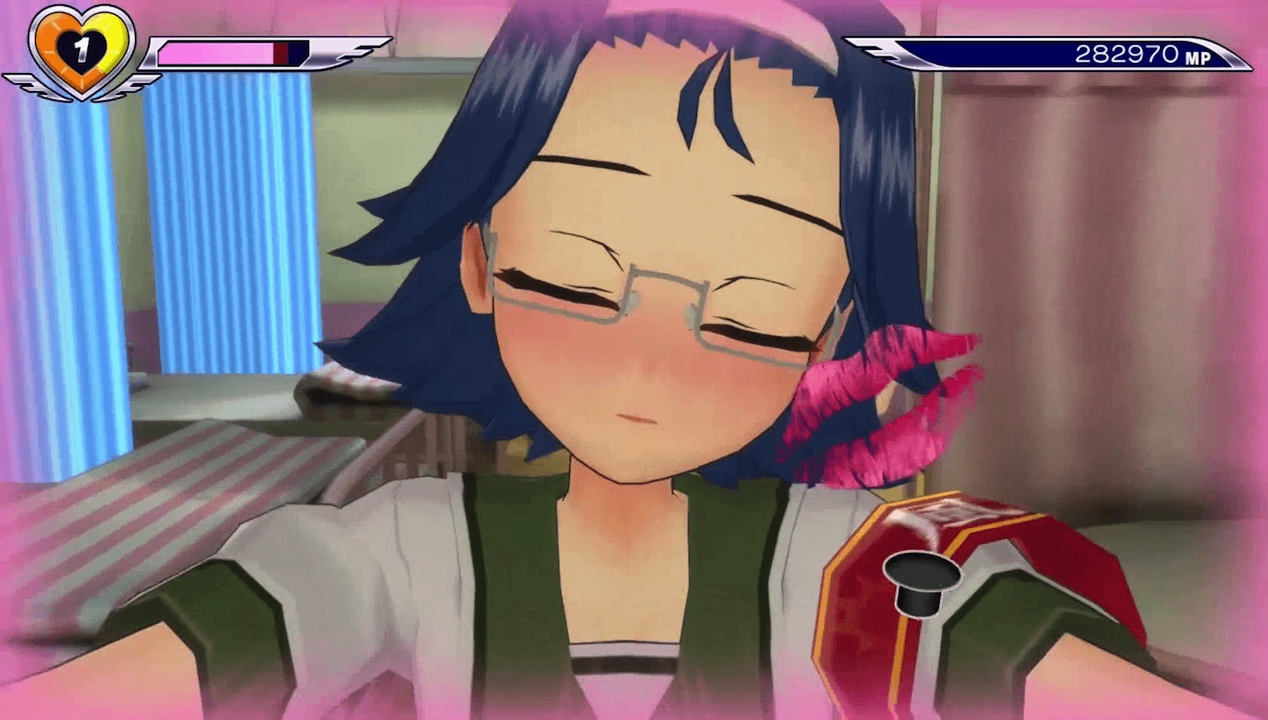 Gal*Gun: Double Peace starts you off by choosing a personality that best suits your character, with four choices starting off and more becoming available as you complete certain aspects of the game. What you decide on will also affect the visual novel aspect of the game, with dialogue choices being available or unavailable depending on your levels of intelligence, strength, and pervertedness. At one certain area, you'll also be put on the spot regarding who it is you wish to confess to, which also means that you'll have to respond in ways that'll please the person you wish to court.

For a game that's all about subduing love-crazed schoolgirls with a love gun, there is a lot to ponder over regarding the best means of confessing your love. In a few instances, I found myself replaying certain areas because I wasn't happy with an answer I gave. There's quite a lot to digest while playing, and if your choices run poorly (especially if you choose a less-than-par personality), then the ending you receive will not be in your upmost favor. Fortunately, its funny script -- which does take minor translation liberties for the English-speaking crowd -- makes revisiting past chapters all the more easier to stomach. 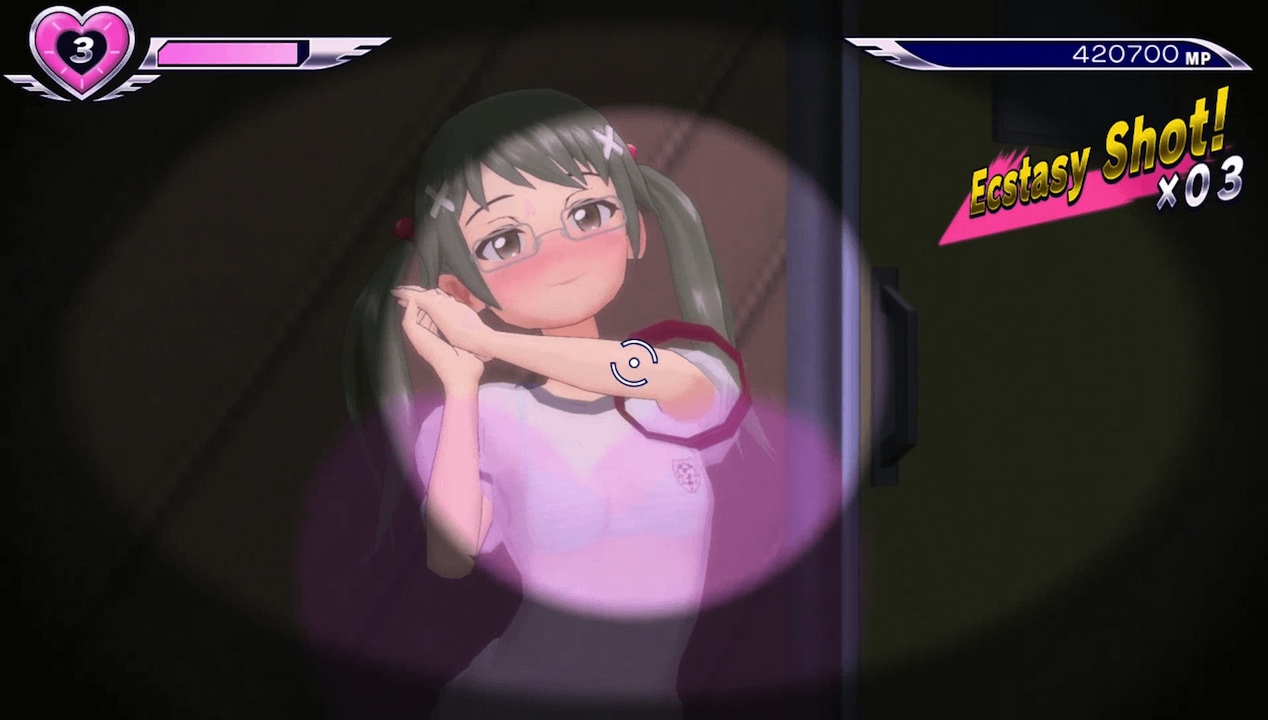 Story-wise, Gal*Gun: Double Peace is pretty great, but what about its actual gameplay? For starters, the control setup runs rather smoothly. Shooting your pheromones at these heart-starved students is easy, with the real challenge coming in the form of taking them out in one shot. Zooming in with the R1 will help to find hidden objects for completing side quests, shooting the Mr. Happiness blobs for more points & health, collecting student books, and -- ahem -- gathering the measurements of your student body (ba-dum-tis!).

Once you fill your gauge, you can attempt to gain more points via the Doki Doki Mode. Here, you can bring 1-3 girls to their knees via touching or rubbing them in their right spots. No two girls have the same sensitivity spot, so it's best to do a quick search and then go for the kill. Get them riled up nicely, and you'll achieve Double Peace euphoria, which can also help with taking out nearby girls once you exit out of the mode. The Final Doki Doki Mode, which appears with the girl you're seeking, follows the same route, but takes a bit longer to accomplish. (The Final Doki Doki with both Shinobu and Maya kinda drags, just to warn you.) 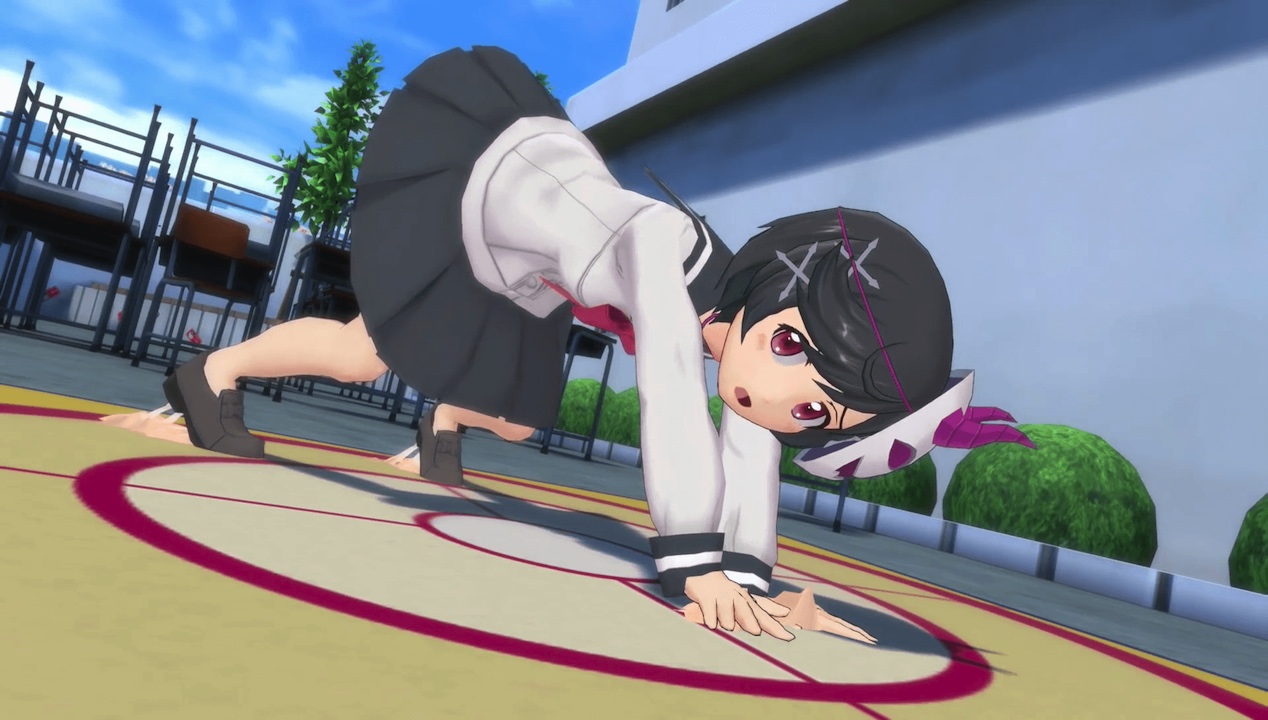 In certain chapters, you'll also come across boss battles. These will either have you facing off against Kurona's monsters or battling against other students or Kurona/Ekoro. The monster battles can be fairly easy, with their weak spots discoverable via your R1 button, so those looking for a challenge there will be a tad disappointed. However, facing off with -- say -- Maya or Shinobu does have its tough spots, with their attacks being swifter than a vegetable monster.

Graphically, Gal*Gun: Double Peace looks pretty nice, capturing its anime-like look similarly to the recent Senran Kagura: Estival Versus. There is still some room for improvement regarding small details on a character, but for what is delivered does suffice. The voice acting is superb, with the Japanese voice actresses sounding like they're having fun with the material they've been given. The one downside of this game is that its soundtrack can get repetitive, with roughly the same 3-4 songs playing on repeat. 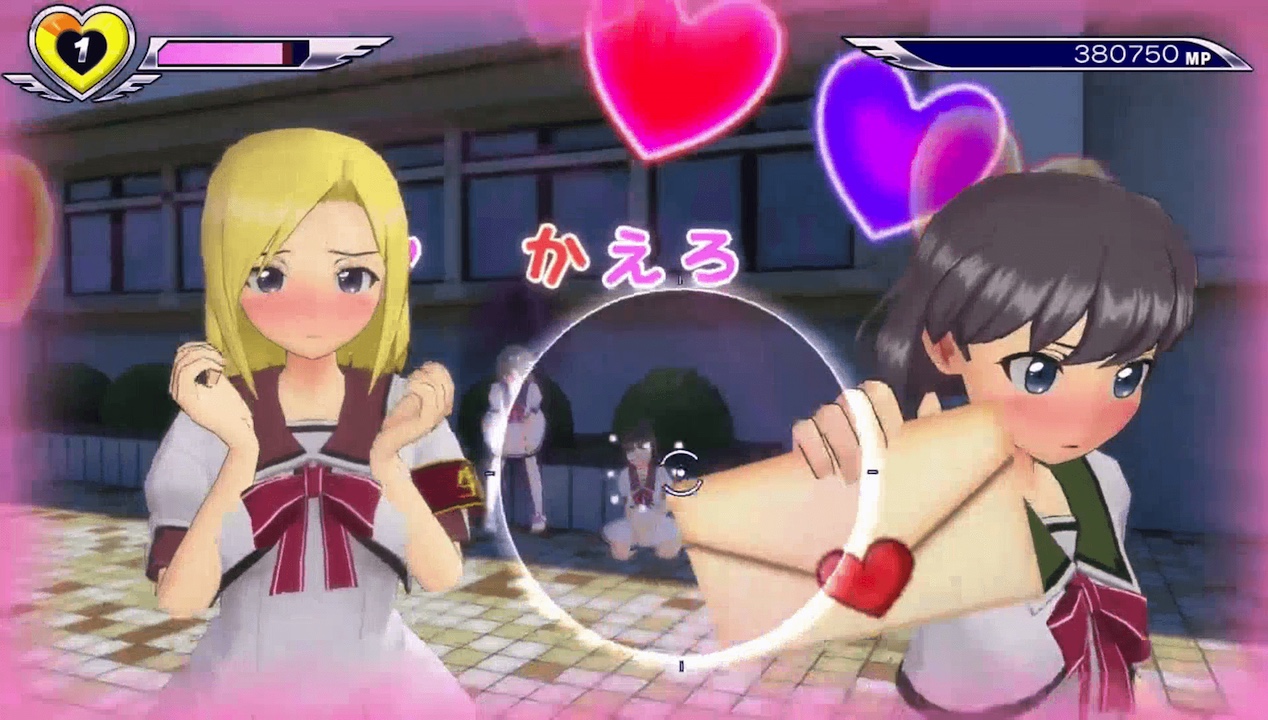 In your first run-through, the Story Mode will take roughly three hours to complete. As there are different routes, levels, and storylines to discover, there is a lot focused on replayability. Taking that into consideration, you might find yourself playing the main game for roughly 20-25 hours before you receive all the endings and unlock all the modes and such. Once you complete each story mode, you'll also unlock stages in the arcade-like Score Attack Mode, which throws you into each level nonstop without the story breaking in-between.

I was expecting Gal*Gun: Double Peace to merely have some laughs with half-decent gameplay, but walked away from it impressed with its fun mentality and both well-written & well-acted script. With tons of replay value and a surprisingly great control scheme, Inti Creates has crafted one of the best rail shooters on any console. Needless to say, Gal*Gun: Double Peace is one video game you shouldn't judge by its perverted cover.