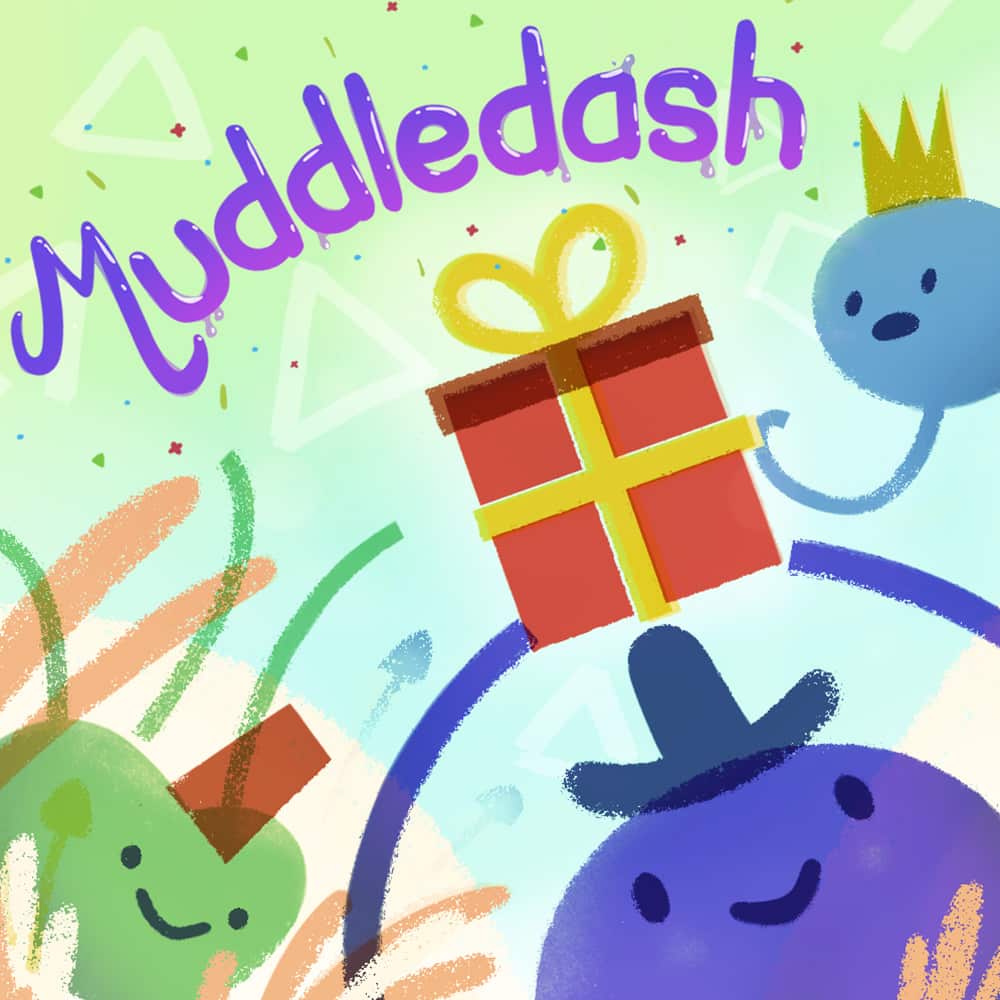 slampunks' Muddledash is a rather simple game to describe. Two to four players take control of octopi on a quest to reach their friend's birthday party. There is only one gift between everyone, and it's up to the fastest and most clever of friends to be the one to deliver that birthday surprise. And...that's all there is to Muddledash.

From this description, it sounds like there's not much to the game's overall experience. To be fair, it is a bit of a bare bones release, as it contains just one game mode and requires you to have at least one friend play alongside you. There's even a lack of online multiplayer, which gives those whose friends live too far for a quick visit no chance of even giving it a simple play-through. But when you do have friends that can come over and dive into the race, that's where the real fun in Muddledash truly begins. 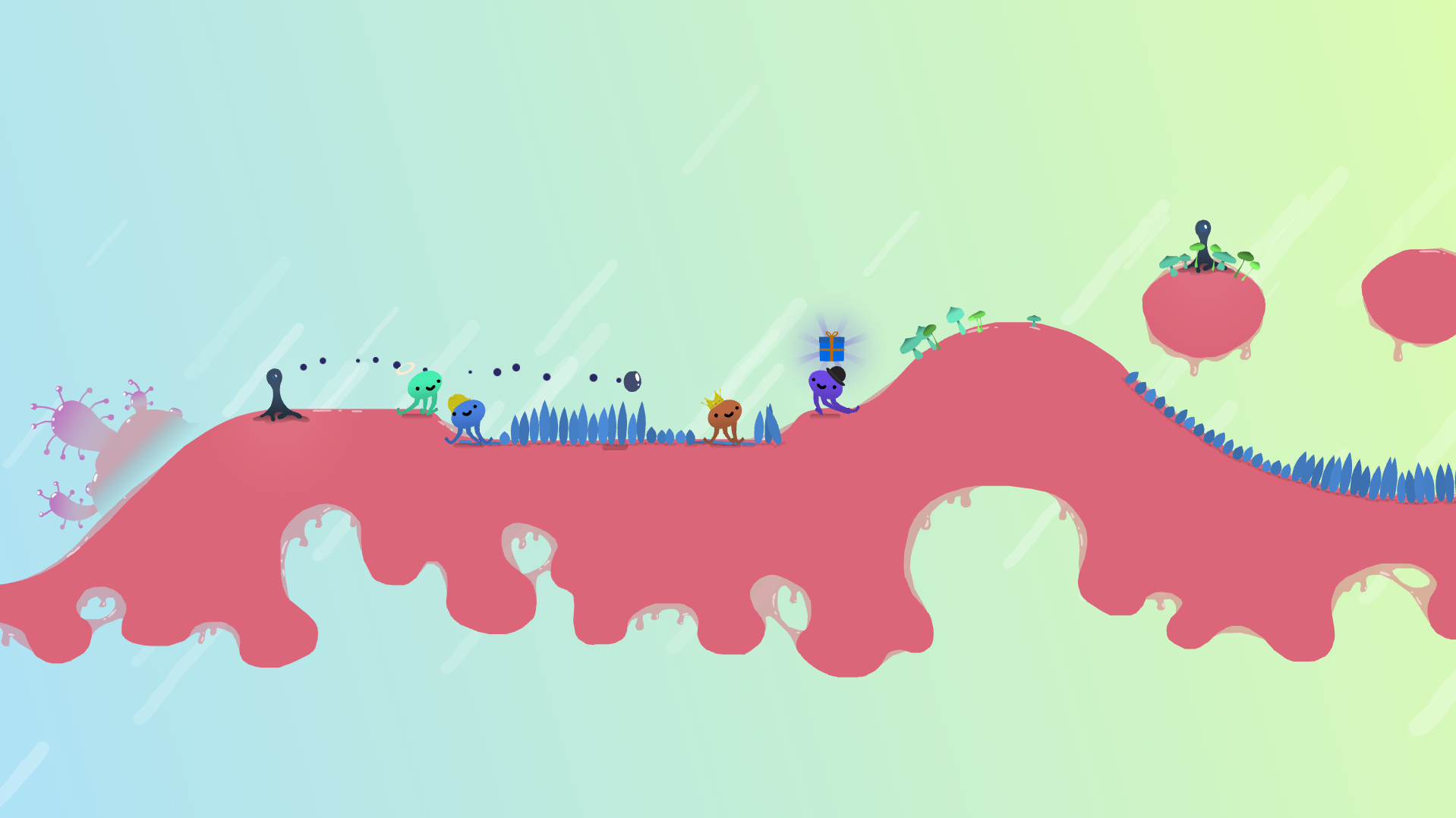 After picking your colors and mandatory party hats, players will have to grab that birthday present and try to reach your friend's house with gift in tentacle. However, there are many obstacles that are in your way such as sticky grass, windmill-styled obstacles, and even long leaps that require a good speedy dash to get to the other side. If your friends catch up, they can knock you out and snatch the present right from your suckers. Muddledash isn't the type of game where the fastest one will be automatically the winner, as going too far will result in players respawning close to you, so more strategy and timed leaps will be more helpful when it comes to gaining that victory.

Perhaps that's what keeps this game fun, despite its somewhat one-trick pony mannerism. Racing against friends can lead to unpredictable moments, especially when the randomly generated backdrops make it so no two races are exactly alike. There were times when I was near the end of the level, when my friend came from behind, stole the gift, and proceeded to saunter into the house as if he had done all the work this entire time. It can be frustrating to have a victory nabbed from you last-second, but it's moments like this that keep playing the game very enjoyable. 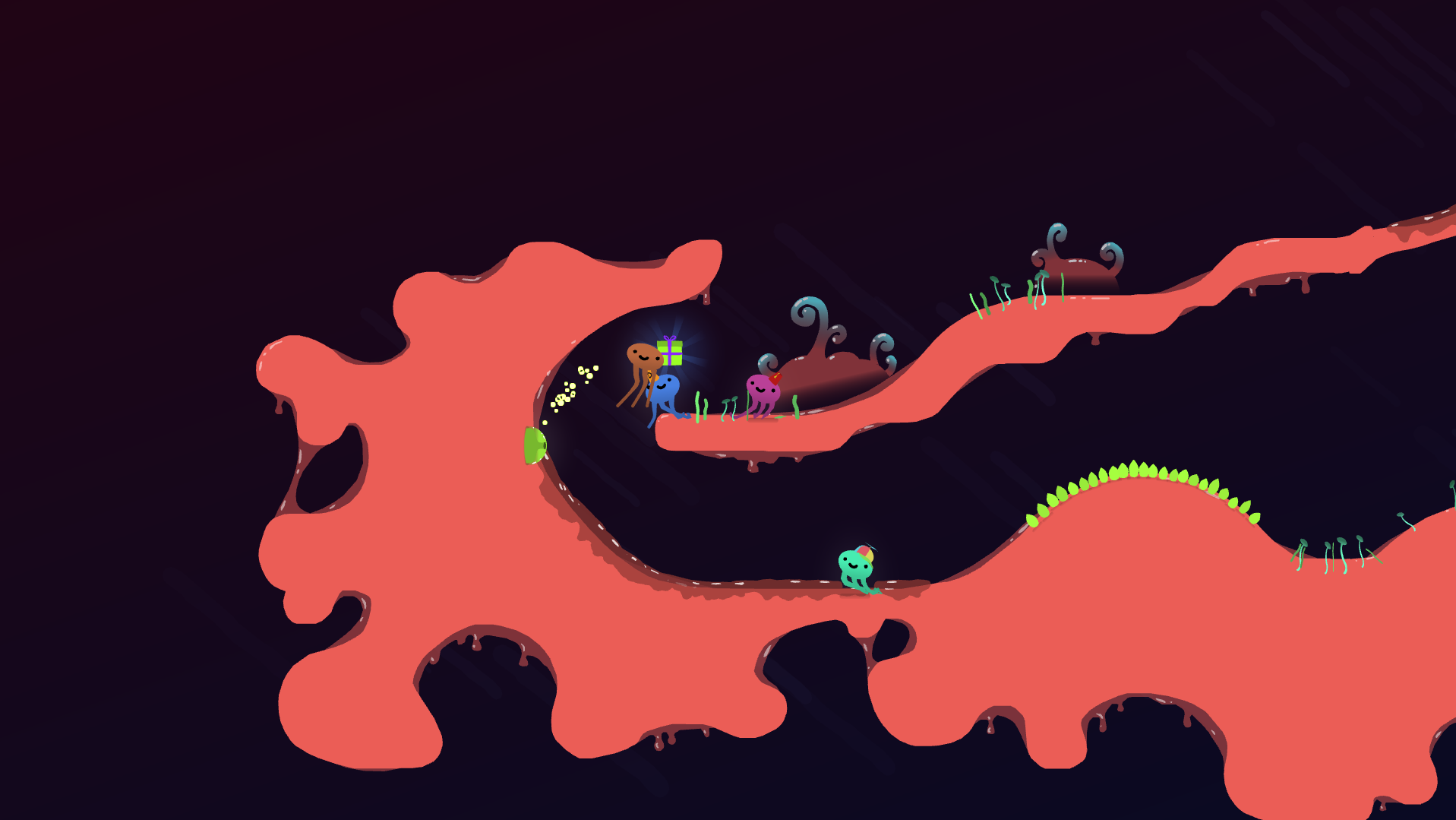 It also helps that the visuals are so damn cute! One can't be mad too long at an opponent when they're just a happy-looking squishy thing with eight legs. Even its level layouts have a great sense dose of sweetness presented all throughout. Rarely has there been a couch multiplayer whose own graphical aesthetic keeps things feeling fun and fancy-free during the entirety of your race times.

Still, one can't help but look at the mechanics of Muddledash and think that more could be done with them. The likes of battle modes and even co-op puzzle solving feel like they'd fit right at home alongside the racing elements. It's up to slampunks to see if anything else can be added to the formula; but for the time being, the amount of excitement that the racing delivers on its own is surprisingly bountiful.

Muddledash is one easy game to learn & master, but it's how you & your friends react to it that will make it special. While it can only go so far with just one mode, it delivers a boatload of excitement as players race through it. Muddledash may lack variety, but its $6 price tag makes it an in-room multiplayer title easy to add to one's library.