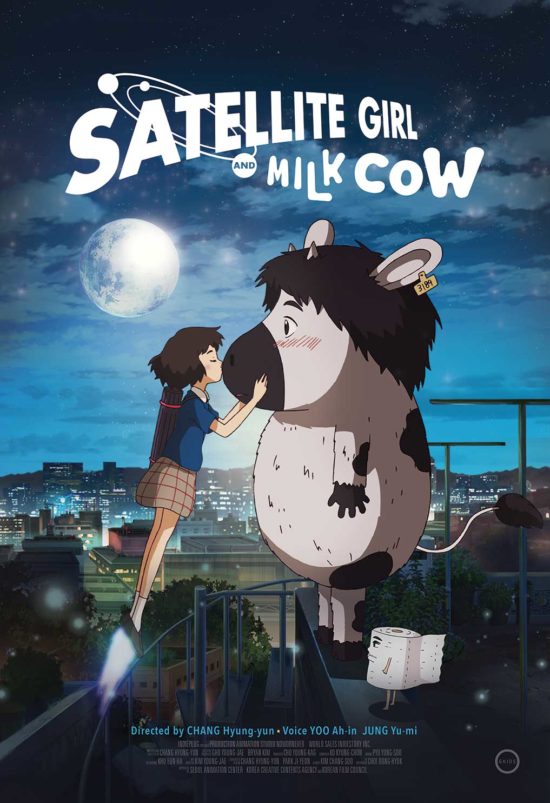 There have been many a weird love story told since the days of old, be it by literature's greatest writers or even the likes of a Troma production. But Satellite Girl and Milk Cow, a 2014 Korean animated film, takes the cake and gladly swallows it whole. How fortunate that the sum of its peculiar parts makes up one entertaining 80-minute romp.

The premise alone of Satellite Girl and Milk Cow is quite the doozy: a satellite that's been long out of commission comes back to life after hearing a street performer play. Dubbed Il-ho (Jung Yu-mi), the satellite takes the form of a human girl, and coincidentally saves a talking cow from being destroyed by a robot known as The Incinerator. By a strange twist of fate, the talking cow -- named Kyung-chun (Yoo Ah-in) -- winds up being the street performer she heard, with the poor guy transformed into an animal due to a broken heart. Alongside a toilet paper wizard named Merlin and a dog who's got more skills than an Animal Planet star, the two attempt to find a way to break the curse whilst also avoiding a strange plunger-wielding man who steals livers from the brokenhearted. 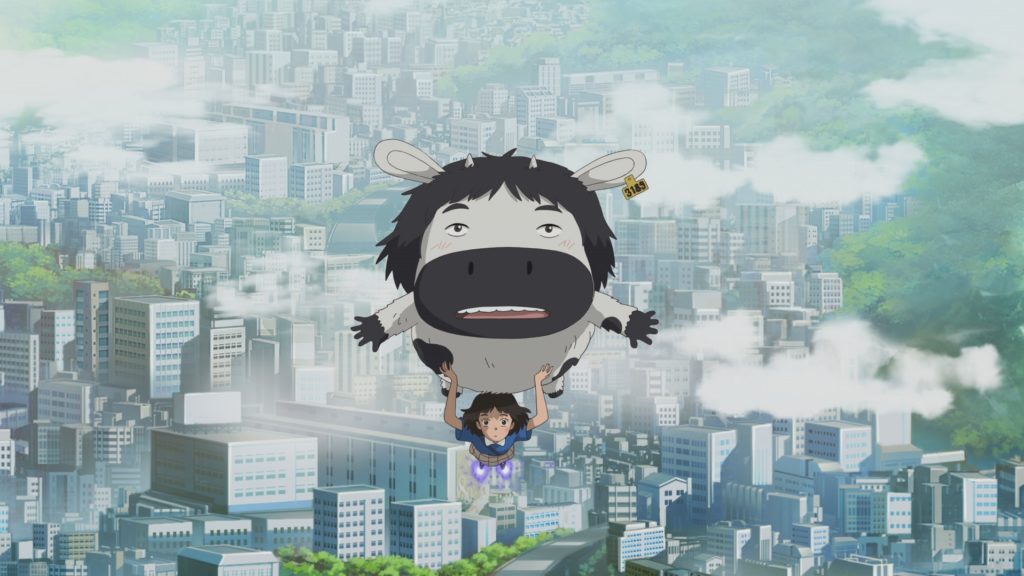 Calling this film bizarre is an understatement, but it's writer/director Jang Hyung-yun that somehow manages to piece it all together somewhat coherently. No doubt there are elements to this movie that make zero common sense, such as why this weird hybrid of Lupin The Third and some minor Beavis & Butt-Head character wants to steal Kyung-chun's innards. And yet, this film manages to get away with all its zaniness intact, even if the narrative feels strangely improvised.

A big reason why Satellite Girl and Milk Cow works is due to the power of its heart. While there appears to be no moral or lesson learned from this modern fairytale, one cannot deny the sweetness it manages to conjure up. Its characters and surroundings manage to pay big homages to some of anime's greats and unsung heroes, from Il-ho's Astro Boy-like powers to the Miyazaki-styled whimsy of the animal characters. And dare I say, it even takes a few notes from the playbook of Excel Saga director Nabeshin, especially with its nonsensical story somehow resulting in a warmhearted conclusion. 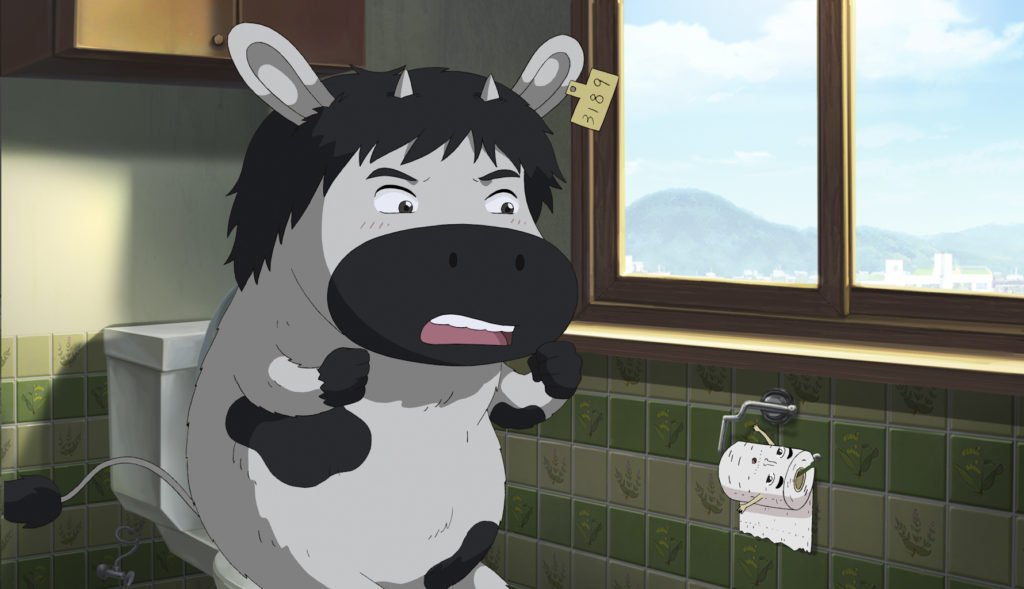 With this combination, the movie manages to deliver a foray of likable characters. Il-ho has this kind naivety that's present throughout the film, making her mannerisms and reactions seem more child-like than most. You also can't help but feel bad for poor Kyung-chun, who has to wear an uncomfortable human suit to hide his curse and doesn't even get any sympathy from the one who caused his heartbreak. It's when the pairing gets closer when the love connection makes for some soulful sincerity, even if it continuously treads down a bonkers-layered territory.

However, there are some glaring issues with Satellite Girl and Milk Cow that can't be ignored, none of which deal with its narrative. Although Korea is quite the powerhouse with its animation (as they're the ones that bring to life more than half of America's cartoon contribution), one wouldn't have trouble finding places where corners were cut during production. Some action sequences feel a little jagged, and there were also times where the a character is talking, but their mouth isn't moving. (The vice-versa also occurred in some rare instances.)

Thankfully, the glaring issues of Satellite Girl and Milk Cow are outweighed by its spirit and entertainment value. As strange as a rom-com can get, Hyung-yun's full-length debut manages to be a fun, enjoyable time. Even at its weirdest, Satellite Girl and Milk Cow still succeeds at being the type of film you won't be able to pull your eyes away from. Here's hoping Hyung-yun's talents continue to grow by the time he's called to the director's chair again.